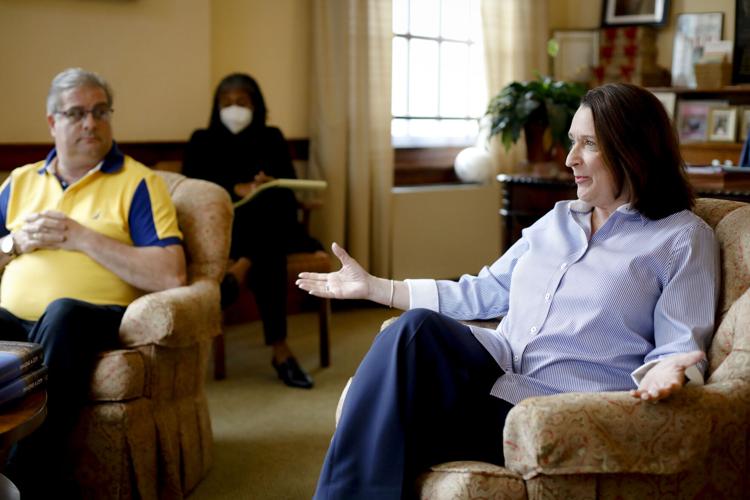 Pittsfield Mayor Linda Tyer and City Council President Peter Marchetti meet in Tyer’s office at City Hall Thursday to explain the state of affairs within the city government, after an unprecedented charter objection was made by Ward 2 Councilor Charles Kronick during the last City Council meeting June 14. The move halted all discussion and voting in regard to the mayor’s proposed fiscal 2023 budget and essentially removed the council’s ability to make changes to the budget and vote on it before it was accepted by default. 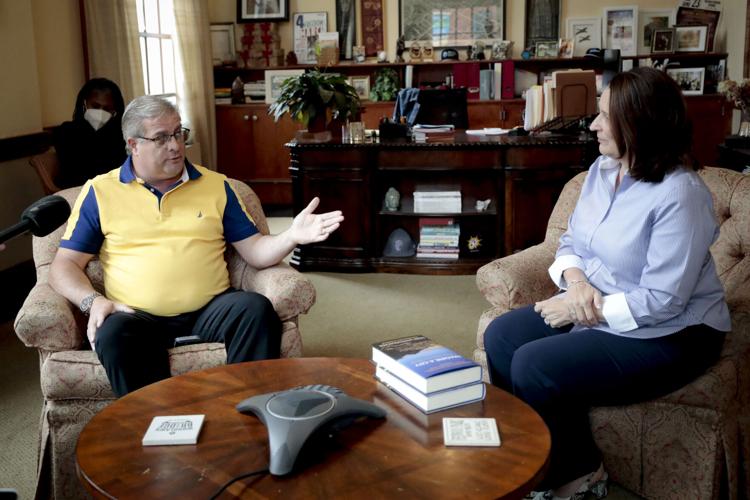 Pittsfield Mayor Linda Tyer and City Council President Peter Marchetti discuss the aftermath of a councilor's charter objection, which shut down debate on the city's next budget. Tyer has agreed to honor changes the council makes at its session this coming Tuesday. 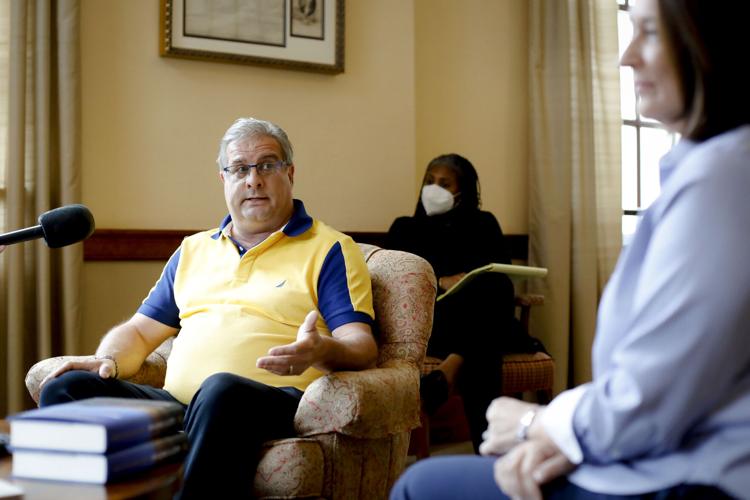 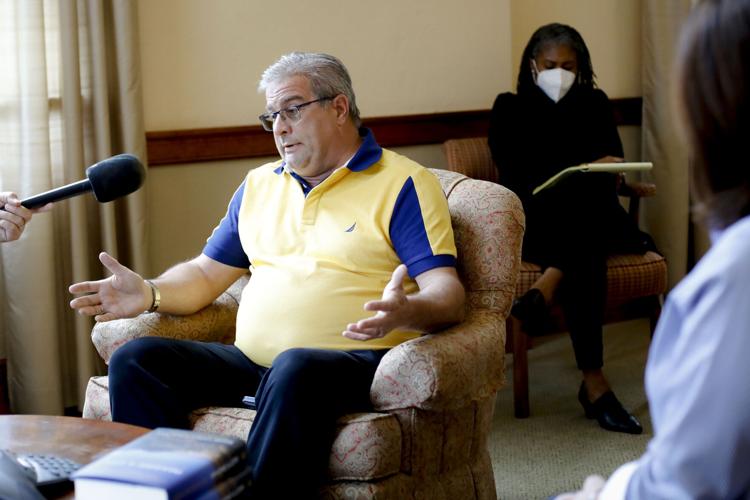 City Council President Peter Marchetti on Charles Kronick's charter objection: "That decision took [away] the opportunity for the members of the City Council to take the up or down vote on the budget. ... All the citizens of Pittsfield lost that same opportunity."

PITTSFIELD — The Pittsfield mayor and City Council president say an elected official was reckless in freezing a budget debate this month.

The councilor says he did it to save taxpayers money.

A week after Pittsfield budget deliberations came to an abrupt halt due to that councilor’s procedural move, officials on both ends of the conflict unleashed rhetoric Thursday.

The mayor went further than talk, agreeing to accept 11th hour finance adjustments from the council after all, even though she’s not required to do that after Ward 2 Councilor Charles Kronick invoked what’s known as a charter objection — a maneuver that prevents the council from discussing or voting on an item until its next meeting.

If a charter objection is seconded, which Kronick’s was, the item in question can’t be taken up until the council’s next regularly scheduled meeting, nor at a special meeting, according to Tyer. In this case, the next meeting would fall after the council’s window closed to act on the proposed fiscal year 2023 budget of $198 million.

“While the councilors have the absolute right to issue a charter objection,” Mayor Linda Tyer said Thursday, “I think in this instance, it certainly caused a bit of manufactured chaos.”

Kronick disagrees. “I think the budget was reckless,” he said in his first interview on the matter. “The budget was irresponsible. The budget was loaded with payroll that does not service constituent needs.”

Technically, Tyer’s proposed budget for the year that starts July 1 went into effect this week, without any changes the City Council made because of Kronick’s action.

Still, the budget remains on the table for the council. If the body votes to pass the budget with changes at its meeting Tuesday, Tyer said Thursday she will honor those changes, even though the charter does not require that.

“I felt they were fair and reasonable and strengthened the budget,” she said of the council’s changes, speaking at a press conference Thursday afternoon.

Kronick did not explain during the June 14 meeting why he made the charter objection. Nor in the week after. But he spoke about his decision Thursday.

“I called the objection because the budget is not structured for the recession,” he told The Eagle.

Tyer’s proposed budget represented a 4.8-percent increase over this fiscal year’s budget. Kronick said he viewed the mayor’s budget as preferable to the council’s amended version with additions.

“I’m against raising taxes on people who do not have the ability pay them,” he said. “We have to take care of the people who are vulnerable.”

“And that decision took [away] the opportunity for the members of the City Council to take the up or down vote on the budget. ... All the citizens of Pittsfield lost that same opportunity.”

During budget discussions, Kronick attempted to cut the Department of Human Resources budget for employee training and education by two-thirds. He also tried to cut the new office of Diversity, Equity and Inclusion budget, calling it a “sacred cow.”

He also took issue with proposed pay for a licensed social worker that he thought was too high.

Marchetti and Tyer said they called a press conference Thursday to clear up questions and concerns they had heard over the last week or so, in the wake of the charter objection.

The council had voted to have the Pittsfield Police Department direct $250,000 of grant funds it receives each year toward hiring more co-responder clinicians.

Even though Tyer’s proposed budget went into effect as is, without that council action, grant funding will still be used to hire more co-responder clinicians, Marchetti said.

Why does the charter objection tool exist?

Marchetti said, as a member of the Charter Review Committee, that the tool was added “for when the City Council had to take a vote (and) they really didn’t have all the information.”

The tool was designed to close proceedings, when needed.

“It’s a very powerful tool,” Tyer said, “but ought to be used judiciously. It shouldn’t just be used as a hammer or a sledgehammer. It should be used as more surgically, in my mind.”

Marchetti said he has sent information about the councilor recall process to concerned residents, in the wake of Kronick’s move this month.

“I’ve been copying that link and sending it to everyone who says, ‘What can I do?’ There is a recall provision,” he said. “It is a very complicated process to go through.”

The process has to start with a voter from Ward 2, Tyer added.

Earlier in budget discussions, Chief Diversity Officer Michael Obasohan told the council he used funding to hire a company to lead a training on LGBTQI+ awareness and education, mentioning that city employees asked specifically for help with inclusive language.

“People want to know how to talk to someone else — are you a he, she or her?” Kronick asked. “Maybe it’s just an opinion — but I don’t think it’s just an opinion, I think this is common sense sort of thing. You know what you are because you were told that when you were born.”

Kronick went on to say his feelings about trans people were rooted in “a religious principle of mine.”

When asked about Kronick’s comments and attempted cuts to the new department, Tyer said they prove the need for the city’s Office of Diversity, Equity and Inclusion.

“We are still fighting against those racist, homophobic, transphobic (and) misogynistic attitudes. And yes, sometimes people [who] have that mindset get elected to office.”

Marchetti also took issue with Kronick’s comments. “As one of the three members of the City Council that identify themselves as LGBTQ,” he said, “I find some of his comments in open session very offensive.”

Kronick said Marchetti can choose to find it offensive. “I didn’t say anything offensive.” He said his issues were about money, not people, and that he didn’t want a department “policing speech.”