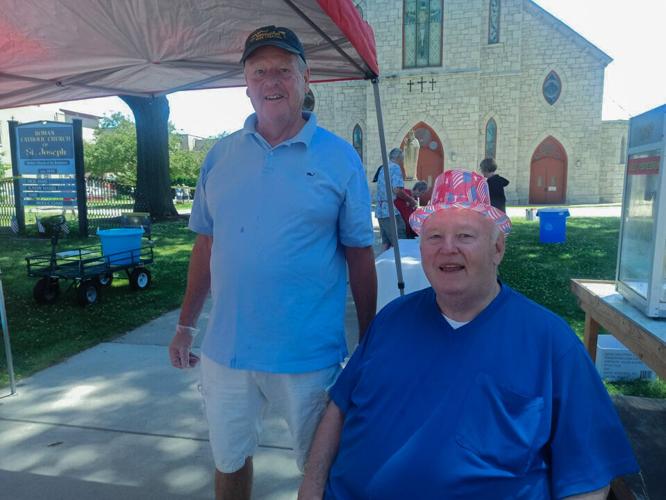 Michael Garvey, who was volunteering for St. Joseph's Church in downtown Pittsfield, and Msgr. Michael Shershanovich. “People are happy that things are getting better, but I still wear a mask in church,” Shershanovich said. 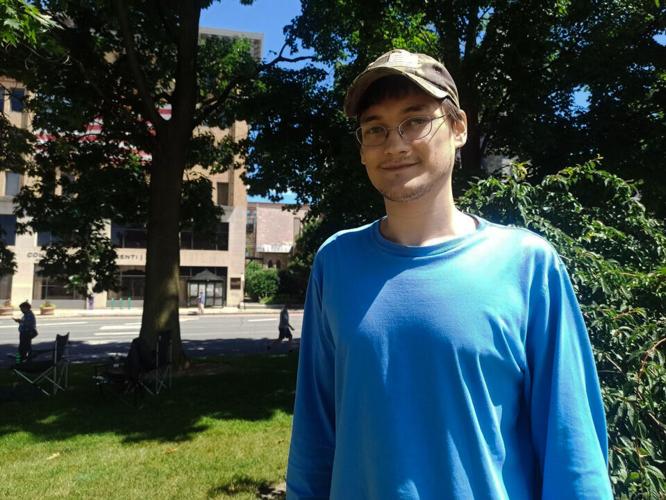 Alex Kusick standing in Park Square. He is happy to see pandemic restrictions eased. “Now it feels all right. It seems like people are getting out and about.” 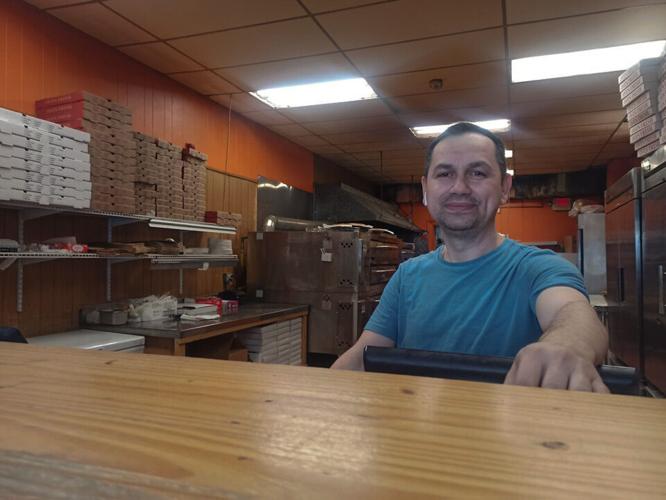 Gokseven Yildiz, manager of Liberty Pizza, says that business isn't quite what it used to be in downtown Pittsfield. 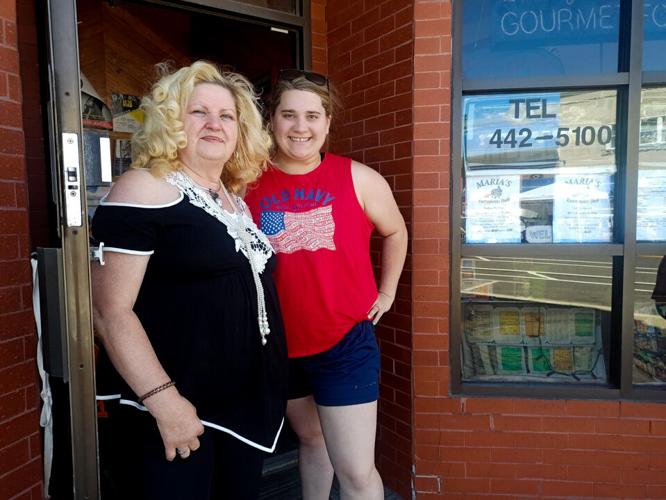 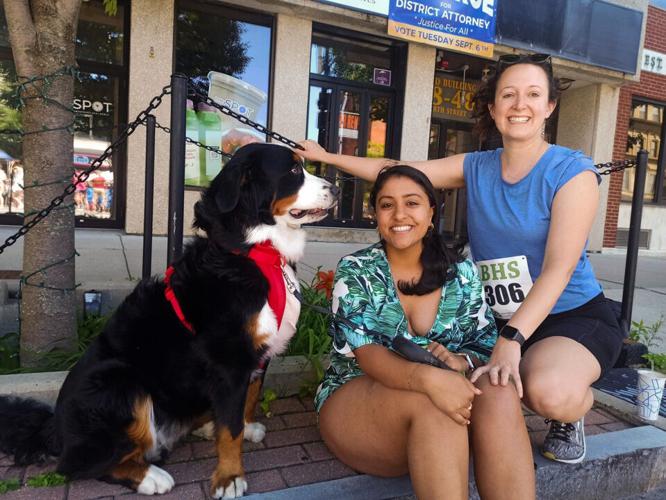 Melissa Parvi, Anna Ellwood and their dog came to visit Anna's mother, Terry, this past weekend. “I’ve had COVID before and I feel fine now,” said Parvi. 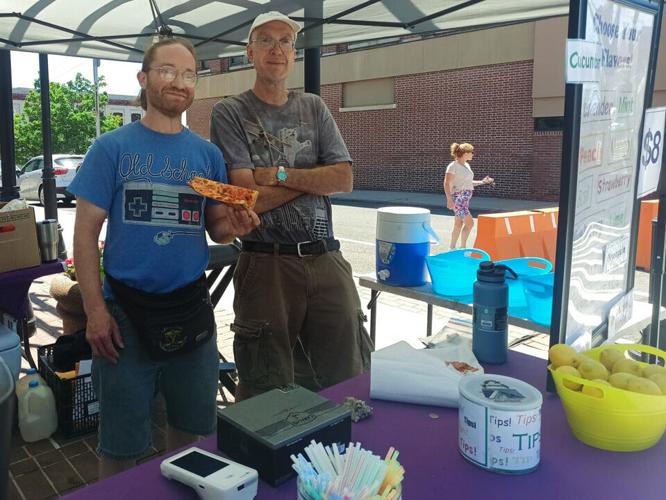 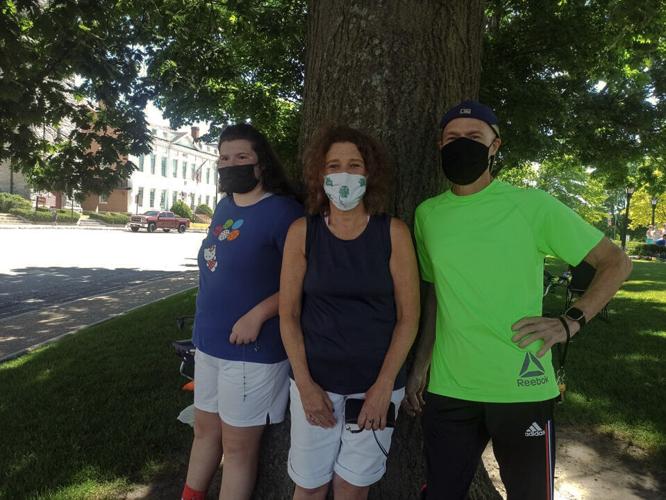 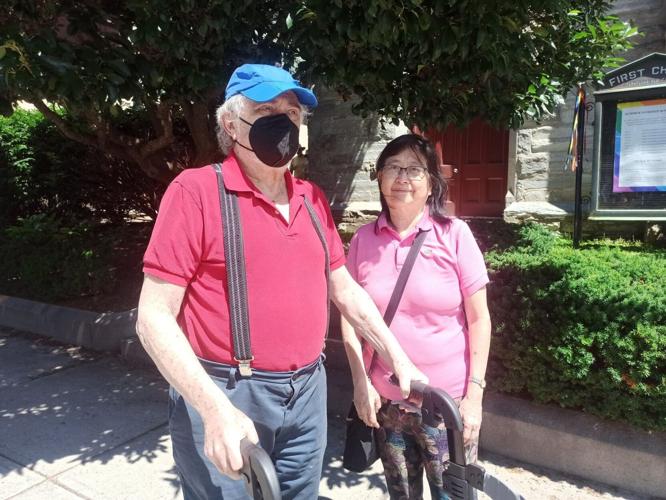 Paul and Pamela Schwartz came up from New York City to visit friends. Paul Schwartz said he wears a mask because he is at high risk for infection. They laughed when asked if they felt comfortable among so many people. “We live in New York City, this is not really a crowd for us,” he said.

PITTSFIELD — You might say they voted with their faces: How comfortable were people with going maskless Monday, at the Pittsfield Fourth of July Parade, one of the largest gatherings in recent history?

Yes, many Pittsfield residents and visitors who attended the parade, after two years of event cancellations, feel like the COVID-19 pandemic is largely behind them, though new cases continue to be reported.

On Monday, people wearing masks were decidedly in the minority. People interviewed expressed a desire to break free from COVID-19 restrictions.

Some business owners say, however, that they have not quite seen a return to normalcy.

On Monday, a big crowd was teeming with excitement to see the return of the Fourth of July parade after two years.

And yet, in Park Square, Peter, Christine and Abbie Paoli were standing under a tree, observing the parade from a distance.

The family said they were keeping distance for comfort, rather than safety. “We feel better,” said Peter Paoli. “Abbie has a cold and wearing masks makes us feel more comfortable.”

Also under the shade, Alex Kusick said he welcomed the pandemic's easing and looks forward to attending more social events, especially Springfield’s Big E, the Eastern States Exposition. “It’s a shame we had no social events, I didn’t bother with online,” he said of those long pandemic months. “Now it feels all right. It seems like people are getting out and about.”

Paul Schwartz and his wife, Pamela, were visiting friends Monday in the Berkshires. Paul Schwartz, who was using a walker and wearing a mask, said he does so because he is at high risk for infection. They both laughed when asked if they felt comfortable among so many people.

“We live in New York City, this is not really a crowd for us,” Paul Schwartz said.

Sitting along North Street’s sidewalk, Melissa Parvi was trying to hold her dog back from licking strangers. Parvi and her partner, Anna Ellwood, adopted their pet during the pandemic. They both work in the technology industry and were visiting Ellwood's mother, Terry. “I’ve had COVID before and I feel fine now,” said Parvi.

Ellwood's mother Terry said that Pittsfield seems to be recovering. “It’s a normal day under the circumstances. Pittsfield is holding up,” she said.

Some business owners offered a different perspective, when asked Monday how far back the city has come. Maria Sekowski, of Maria’s European Delight, said she doesn’t get enough foot traffic to her North Street business because many people are still working virtually.

Lately, she has noticed a gain in customers. “For me, it just picked up a little, with the Barrington Stage Company coming. I make sandwiches for them,” said Sekowski.

She said that the lack of parking remains an obstacle downtown. “There’s not enough parking, if someone wants to come and shop, they want convenience,” she said.

The lack of parking also worries Gokseven Yildiz, Liberty Pizza’s manager. “Since they redid North street, parking has become a problem. That’s the same for every business,” he said.

Yildiz said he also regrets that the monthly Third Thursday outdoor festival was moved away from North Street to The Commons. “You just don’t see that much traffic anymore,” he said. He added that Liberty Pizza’s appeal has kept many customers returning for their cheesy fix.

Other businesses appear to have had better luck. At Dottie’s Coffee Lounge, at 444 North St., the cafe was bustling Monday. “We’re always busy. I don’t think that’s ever going to change,” said Victoria Mason, at the cash register. “Today was packed.”

At this stage of the pandemic, outdoor spaces remain popular. Mark Bocain and Nemo started their business, Freddy’s Rockin Lemonade Stand, just a few months ago. “We’ve done several events in Pittsfield, everyone has been great, we’ve seen a great turnout,” said Bocain.

“Ideally we’d like to get a physical storefront. But this way, we've been able to start the business from almost nothing,” he said.

Still, some express caution about indoor social events, due to the higher risk of infection. Volunteers associated with St. Joseph’s Church were selling burgers and popcorn during the parade. But for their coming Polish picnic, Msgr. Michael Shershanovich said organizers decided to keep sales on a take-out only basis. “People are happy that things are getting better, but I still wear a mask in church,” he said.

“Remarkably normal” might sound like an oxymoron. Amid the fanfare of Pittsfield’s Fourth of July Parade, though, that description from one pa…