But, as Dalton moves to take control of its outgoing trash, it’s a concept Town Manager Thomas Hutcheson isn’t afraid to float.

The town’s top board voted this week to support having Dalton manage the place off Bridle Road where outgoing trash is collected, replacing a private company, Casella Waste Management of Massachusetts.

Hutcheson says Dalton can better serve its residents, and the environment, by using reuse and recycling to reduce the amount of solid waste headed to landfills. He acknowledged, in a briefing this week to the Select Board, that with the expected closing of the waste-to-energy plan on Hubbard Avenue in Pittsfield, the commercial landscape is changing.

In a later interview, the manager said he is negotiating with Casella to serve only as a hauler, leaving the town free to devise new programs that encourage recycling, including, at some point, a “swap shop” where people can give away items of value that might otherwise end up in a compactor.

“We’ll probably just spend the first year getting our hands around the operation,” Hutcheson said.

In January, board member John Boyle had raised questions about the cost and feasibility of the move. He dropped that objection after Hutcheson developed a more detailed budget that shows a town-run transfer station breaking even.

“I’m very pleased,” Boyle said in a later interview. “I think Tom did a good job and came up with some things I didn’t think of.”

Hutcheson argued that the town can help thin the waste stream.

“I would say that there’s a public interest in the town running the transfer station because the town doesn’t have an interest in maximizing the waste that comes through,” he said. “As a matter of public policy … we can say we want to reduce waste.”

“I think this gives us an opportunity to educate our residents and try to reduce our waste and deal with it as much as we can locally,” he said.

For example, by creating a collection point for food scraps that can be steered to local farms, the town would pull out what Hutcheson termed a “heavy component” of solid waste. 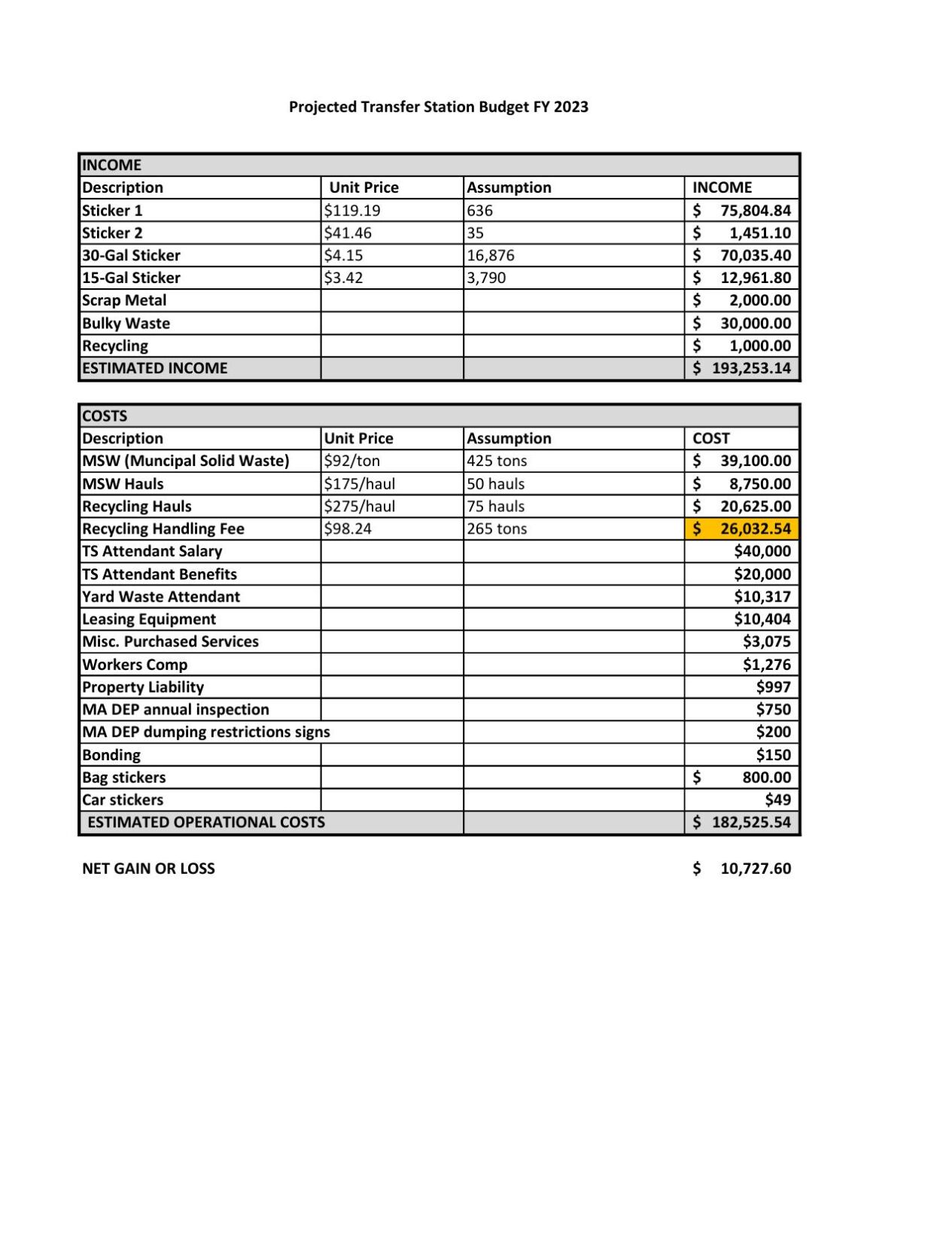 Boyle asked at Monday’s meeting whether the current sticker price to enter the station would remain the same for residents. Hutcheson said it would.

The manager’s plan anticipates receiving $75,800 a year from 636 households paying $119.19 for a certain type of access sticker. The other main source of revenue is the sale of an estimated 16,876 stickers, at $4.15 each, allowing residents to throw out 30-gallon bags of trash.

“It’s gone up so much,” Boyle said of fees to residents.