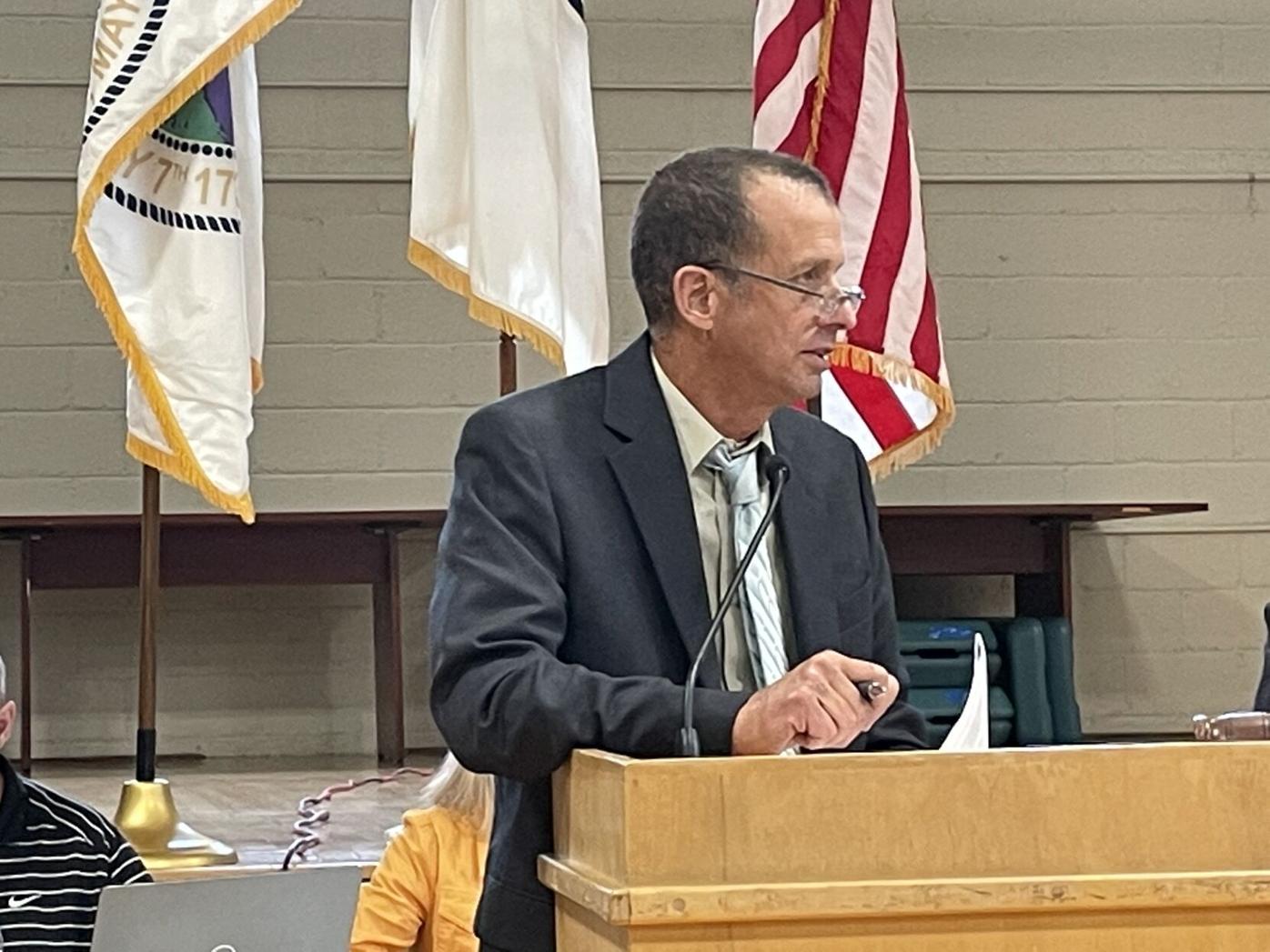 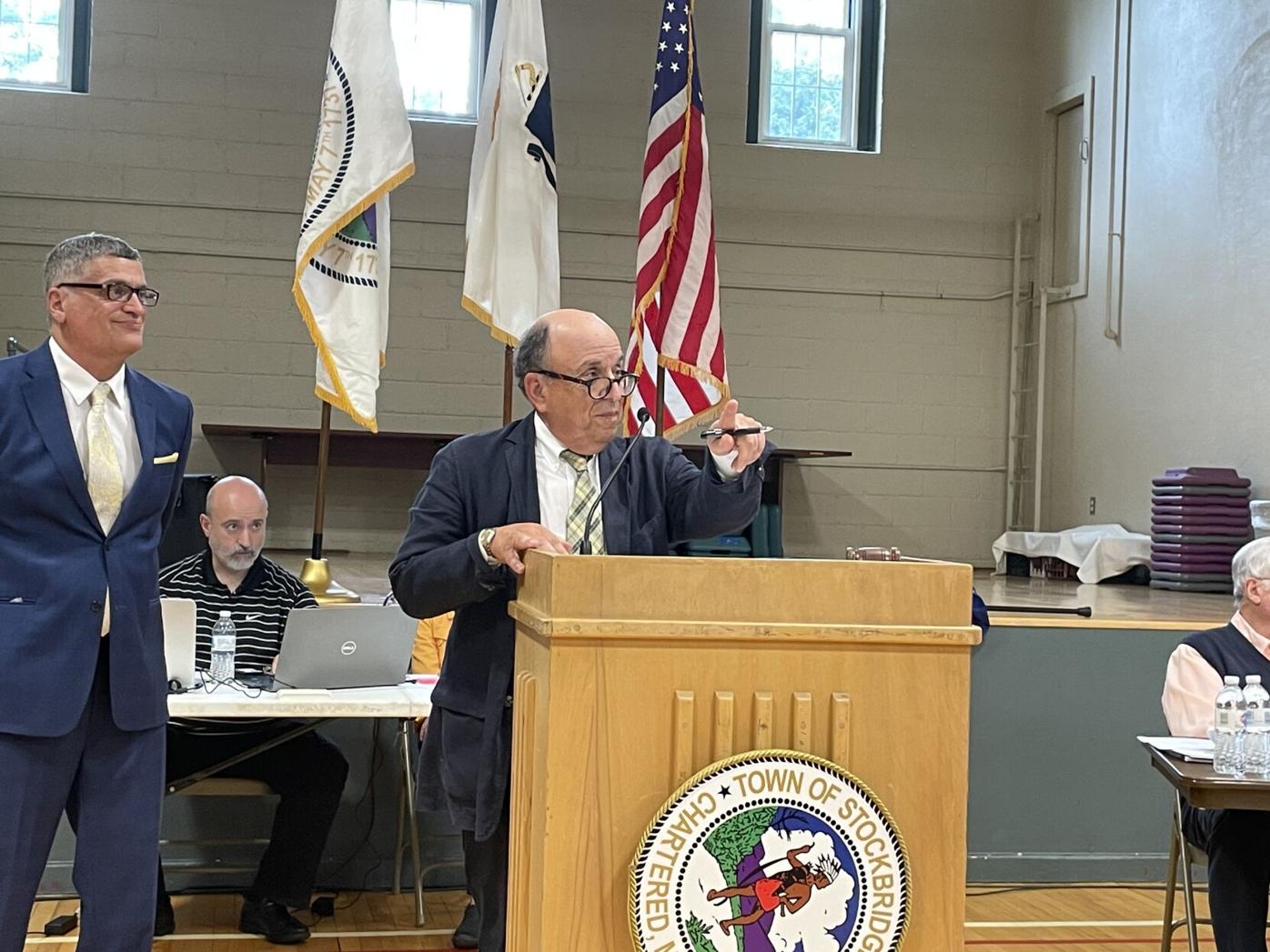 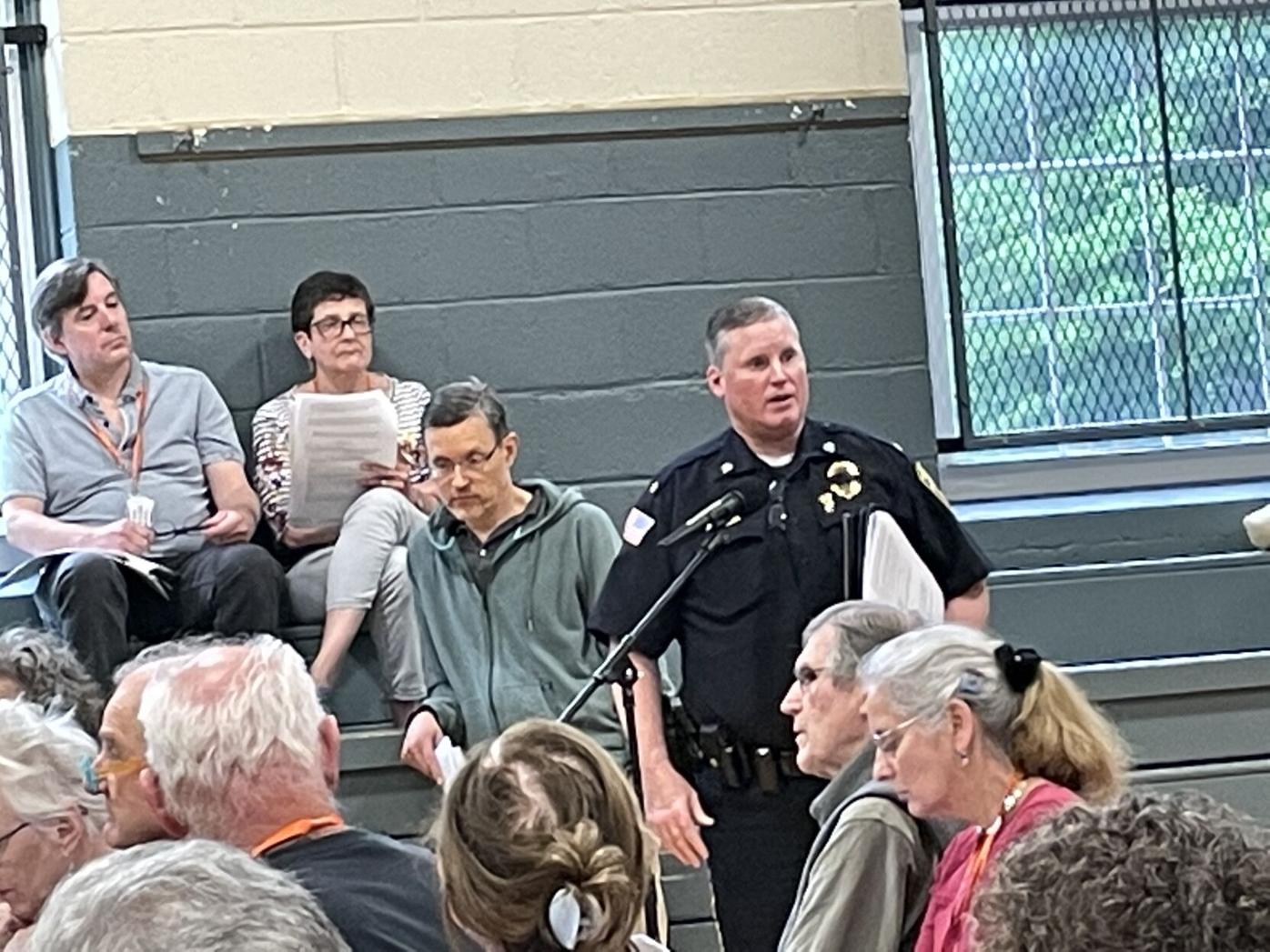 STOCKBRIDGE — It was the most prolonged single-day annual town meeting, at least in the memory of longtime residents.

But by the time acting Town Moderator Stephen Shatz declared the five-hour session “dissolved” shortly after 3 p.m. on Saturday, the 172 residents who took part, out of 1,645 registered voters, had made quick work of the big spending items on the 55-article warrant.

With hardly any discussion, they breezed through the $7.5 million operating budget (down 1.5 percent from last year) and the $3,158,000 operating and capital expenses for the Berkshire Hills Regional School District (up 7 percent).

Only a handful of voters opposed the biggest-ticket items, with votes conducted for the first time by secret electronic balloting.

Overall town spending involving taxpayer votes totaled just shy of $11,794,000, including a $430,000 infusion of cash reserves and $170,000 for additional funding. Adding state aid, the budget prepared by Town Administrator Michael Canales, with full support from the Select Board and Finance Committee, came to a bottom line of nearly $11,930,000.

But it wasn’t long before passions flared and tempers grew hot at times during high-energy, often fierce debate over a sizable number of town bylaws and zoning proposals. Shatz presided as elected Town Moderator Gary Johnston was dealing with a health issue.

The sparks started flying over a new general bylaw on dog restraints, and the amount of time lost dogs would be held until owners claimed them. After Planning Board member Kate Fletcher succeeded in amending the bylaw to give the owners more leeway to recover their missing pets, it passed overwhelmingly with no howls of protest, 146-11.

But voters were just off to the races, trading strong opinions over a wildlife feeding bylaw aimed at preventing bear excursions into the downtown area seeking free food, especially from dumpsters.

After Police Chief Darrell Fennelly assured voters that enforcement would begin with casual conversations between officers and violators, and that his department had no intention of becoming the “bear police,” nor would they interfere with normal bird feeding, the bylaw became the law of the land, 139-23.

A right-to-farm bylaw also attracted much dissension until supporters persuaded residents that the article was aimed at promoting agriculture and protecting farmers, but would not affect vegetable gardens or floral displays. The vote was 135-17 in favor.

One of the fiercest eruptions centered on a proposal to spend an additional $40,000 on consultants advising the Planning Board on a potential “cluster housing with open space” zoning bylaw still undergoing multiple revisions.

The debate, at times vitriolic, dramatically exposed the deep divisions between residents who want to keep the town much as it is today and others who see the need for a new approach to zoning for large tracts of land.

After more than a half hour of debate, the spending article passed by 60-54, the narrowest margin of the day.

— An article on whether to spend an additional $35,000 for the town’s Rest of River Committee opened up fissures over what some considered lack of transparency in the Select Board’s approval of the GE-EPA agreement to clean up probable cancer-causing PCBs from the Housatonic. The flashpoint is a disposal site in Lee for less toxic chemicals extricated from the contaminated river. Shatz, a member of the committee, recused himself from the debate, and Town Clerk Terri Iemolini presided.

Despite the high-voltage intensity of the prolonged discussion, the item finally passed easily, 87-14.

— Overcoming some skepticism by a few voters over a $70,000 insecticide treatment for dying hemlocks in the old growth forest at Ice Glen, the spending article got the green light, 91-6, after Selectman Patrick White warned that without immediate help, the trees would succumb to blight and require more costly removal.

— The town’s first attempt to regulate the short-term rentals of homes through Airbnb and numerous other internet platforms found impassioned support in a 120-11 vote. But several residents favored stronger rules to prevent certain property owners from running overcrowded housing for rentals only, causing issues with neighbors.

— Creation of an official Stockbridge Bowl Stewardship Commission found favor in a 146-11 vote.

— Also approved: A building numbering plan to help first responders identify locations in emergencies (a 122-28 vote) and a zoning bylaw aimed at preserving ground-floor commercial space in the compact business district, rather than eventual conversion to residential uses (a 96-27 approval),

— The only proposal to fail would have allowed business zoning district establishments to be spared the requirement for off-street parking spaces. It was close, but the “nays” prevailed, 56-53.

Spending items approved included $720,000 to replace the Park Street Pump Station, $600,000 to restore the downtown Chime Tower, purchase of a Highway Department Truck with a plow and sander ($140,000), completion of the Larrywaug Bridge replacement ($135,000) establishment of a Stockbridge Affordable Housing Trust ($100,000), upgrades for tennis and basketball courts ($95,000), restoration of the downtown Civil War Monument ($60,000), awater testing and consultants for the Stockbridge Bowl ($35,000) and support for continued talks toward possible consolidation of the Berkshire Hills and Southern Berkshire school districts ($8,000).

Voters also backed enthusiastically the return of historic documents to the Mohican Nation.

They also voted to withdraw from the Berkshire County Mosquito Spraying Program.

As the remaining band of weary residents as well as town officials exchanged handshakes, fist bumps and a few hugs, Select Board Chairwoman Roxanne McCaffrey, apparently commenting on the sometimes frenetic give-and-take during the meeting, observed that as COVID-19 recedes, one thing seems evident: “Stockbridge is back to normal.”