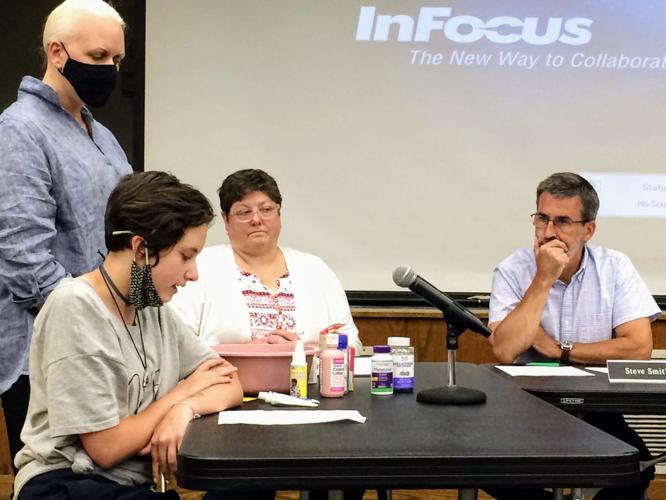 Amelia Coco Gilardi, 13, seated at left, addresses the Pittsfield Board of Health about how the operation of a new cellphone tower has affected her health. Behind her is her mother, Courtney Gilardi. Board members Kimberly Loring and Steve Smith listen. 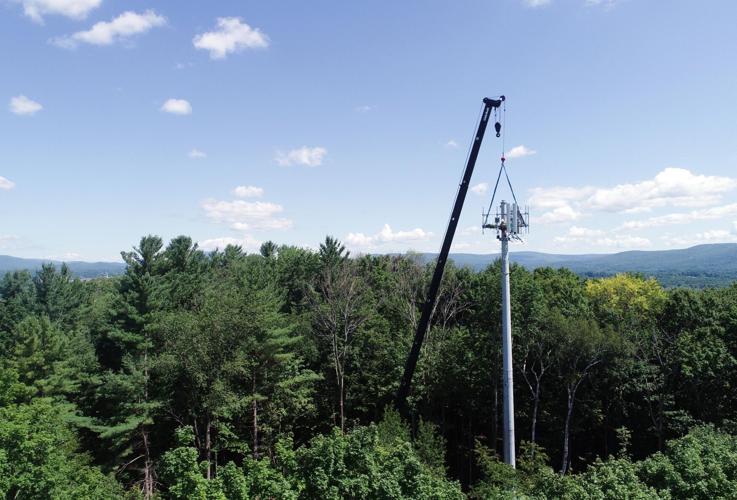 This was the scene near Alma Street in Pittsfield last July, as workers put the finishing touches on a Verizon Wireless cell tower. This week, members of the city's Board of Health said that reports of health effects in the neighborhood cannot be dismissed despite a recent field study that showed radio frequency radiation to be well within levels allowed by the Federal Communications Commission.

“You can’t tell me that I’m not having this going on,” said Elaine Ireland of Alma Street, referring to headaches and nausea.

Then came a highly technical spiel on the meaning of a new field survey of that Verizon Wireless tower’s emissions — a report that found radio frequency radiation levels to be, at most, 1.66 percent of what the Federal Communications Commission allows.

What didn’t come: Resolution, after months of debate, about the tower’s safety.

“I think we’re just beginning to get towards an answer,” Dr. Alan Kulberg, the Board of Health chair, said Wednesday night, after more than two hours of deliberations alongside fellow members. “But, I think we’re at the beginning of a process.”

Gina Armstrong, the city’s health director, suggested that despite the low radio frequency readings, the issue of the tower’s possible impact on health in the neighborhood cannot be dismissed.

“There can possibly be some health sensitivity among some people,” Armstrong said. ‘There’s a lot more that can be explored.”

On June 2, the board heard from experts in the field of electromagnetic radiation and human health. Armstrong said the city reached out to those experts again for help in interpreting the findings in a report by V-COMM Telecommunications Engineering of New Jersey. Pittsfield hired that company to test levels of radio frequency radiation in 17 locations around the new tower, located at the rear of 877 South St.

Armstrong said the study, which cost the city $3,725, was needed to check whether FCC limits had been exceeded, giving Pittsfield grounds to complain.

Three experts weighed in with suggestions earlier Wednesday, too late for their ideas to be fully reviewed by health board members.

But, it already is clear that the board is not inclined to take the V-COMM findings as evidence that the tower has had no impact on health in the surrounding neighborhoods.

Stephanie Koles of V-COMM summarized the survey’s method and result for the board. She said the study, a “standard tower survey,” found the 115-foot tower, set high on a hill overlooking south Pittsfield, to be operating well within what’s allowed.

One test location produced the highest reading, at 1.66 percent of the FCC threshold. That is less than one-fiftieth of the maximum.

“That’s a very small amount of the limit,” she said. “Now we know that it is operating in compliance.”

“We are not involved in any biological research or anything like that,” she said.

Experts who have advised the board and residents caution that the exposure levels allowed by the FCC are dated and do not do enough, as wireless technology has advanced, to protect health.

Brad Gordon, a member of the health board, said he is not ready to give the tower a clean bill of health.

“Yes, there is the FCC measurements, but those will not get you where you need to go in terms of understanding the impact,” he said, a view echoed by Kulberg.

Gordon, an attorney, reminded fellow board members that the FCC holds authority over what companies like Verizon Wireless are able to do on towers. The board, he said, is constrained.

“What we want to do is be certain that we are maximizing what we can do,” he said.

Kulberg said health officials should continue to press for state lawmakers to raise the issue of wireless technology and cell tower safety. The board decided this spring to write a letter in support of legislation filed by state Sen. Julian Cyr that would create a commission “to study the impact of electromagnetic (EMR) and radiofrequency (RFR) radiation on consumer protection, public health, and technology in the Commonwealth.”

“Others have more potent standing with those who make the rules,” Kulberg said, suggesting that the next step lies with lawmakers “to bring forth the complaints of the citizens, which might help to establish a different standard [on allowable exposure] in the future.”

Ireland, the 15 Alma St. resident, told the board that since the tower began operating in September, she has suffered headaches, nausea and ringing in her ears. She said she had not had health issues before.

“Recently, the ringing got so bad that I had to leave my house,” she said. “This has just turned my life completely upside down. Now I have to choose between my health and my house, and I shouldn’t have to do that. It’s really upsetting. I never imagined that something like this could happen.”

Ireland said she believes the tower stands too close to homes and should be relocated. Otherwise, she has no complaint. “I love my cellphone like anyone else and I’m not anti-technology.”

Amelia Coco Gilardi, 13, sat at a microphone before board members as her mother, Courtney Gilardi, stood behind her and displayed the sorts of remedies the family keeps handy to address symptoms of nausea and stomachaches.

“But, they don’t help,” said the teen, who has made appearances before numerous city boards. “Indigestion isn’t the problem, radiation is. No one should have to live like this.”

Another neighbor, carpenter William Coe, said that though he has been fixing up his house at 118 Alma St., he might opt to use it for short-term rentals, or might sell, to get away from exposure to tower transmissions.

“That’s what everyone talks about, getting out,” he said of people in the area, despite their affection for the place. “They’ll bend over backwards to keep the neighborhood together.”

Like Ireland, he said he is experiencing tinnitus, a ringing of the ears.

“When I put on my ear protection, it makes it twice as loud,” he said. “Our neighborhood is going to be a ghost town.”

PITTSFIELD — The Board of Health meeting Wednesday night started and ended with resignations: At the top of the meeting was the resignation of…

A 115-foot tower, which sits at 877 South St., has been the source of constant conversation after the structure went live a year ago. Soon after Verizon Wireless flipped the switch, residents near Alma Street began complaining of nausea, dizziness and headaches.