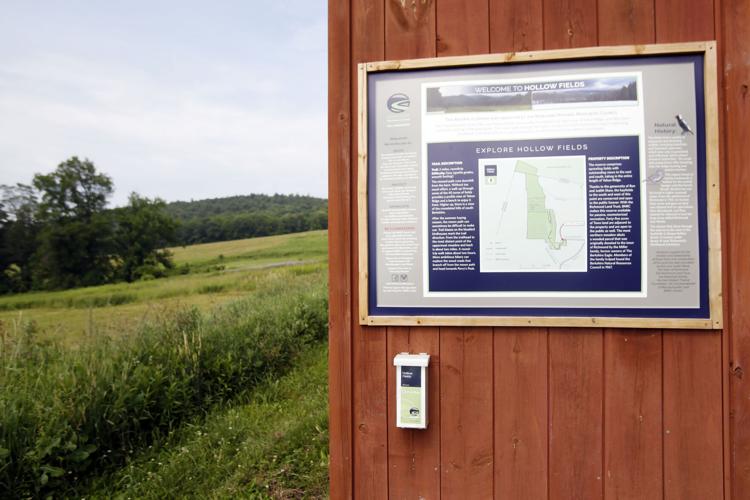 A sign shows the trail network at Hollow Fields in Richmond. Use of the scenic preserve is mired in legal maneuvering, as those involved debate when, and if the public can access trails in the town of Richmond like Hollow Fields. 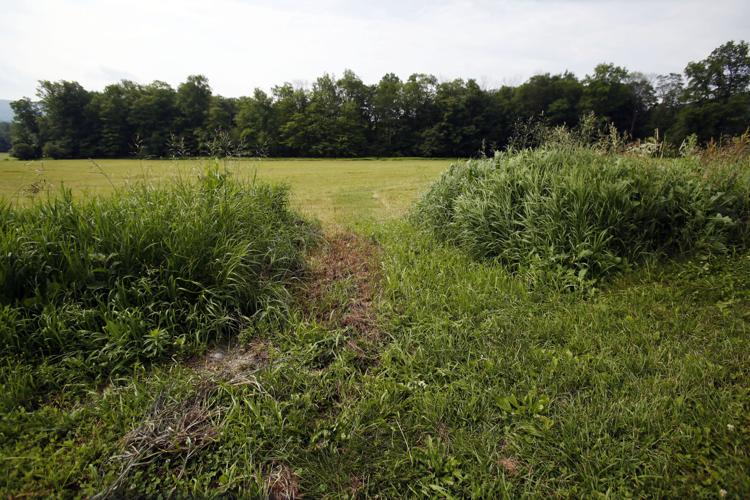 The Berkshire Natural Resources Council's acquisition of preserved land at Hollow Fields was heralded by many. But neighbors in the area have a different view on Hollow Fields and how it is accessed, and the debate has escalated to the Massachusetts Land Court.

RICHMOND — In midsummer of 2019, when the Berkshire Natural Resource Council acquired preserved land at the Hollow Fields reserve, many townsfolk, area residents and visitors cheered the new, easy-access two-mile hiking trail with stunning views of the scenic landscape.

But the addition of a trailhead and compact parking area on Perry’s Peak Road raised the hackles of three families in the neighborhood who say the site amounts to an intrusive disturbance of their privacy.

Nearly all of Richmond is zoned residential/agricultural, and the neighbors — further aggrieved when larger crowds sought out the 660-acre preserve as a pandemic getaway — decided on a legal challenge to the site, claiming the recreational site is not permitted. The BNRC fought back.

At the same time, the Planning Board is working on a zoning bylaw to be submitted to town voters that would allow passive recreation by right on open space and conserved land throughout the town.

“With the explosion of hiking activity in the Berkshires, which shows no signs of slowing down, our towns put the peaceful, tranquil character of their residential neighborhoods at risk unless they pay more attention to managing the commercialization of recreational open space in residential zones,” said Jeff Morse, co-owner of Green Meads Farm, directly adjacent to Hollow Fields.

In a letter to the Planning Board, BNRC President Jenny Hansell contended that some residents of Perry’s Peak Road, a dead end off Route 41, have made “incorrect or misleading statements, suggesting that there are huge crowds, noisy and disruptive events, and that BNRC is an uncaring and unconcerned neighbor.”

The case filed by the BNRC against the town’s Zoning Board of Appeals and the neighborhood group is now on a slow-motion march through Massachusetts Land Court — and a decision may be many months, even a year, away.

How did the dispute wind up in a legal tangle?

Last January, the neighborhood group — Jeffrey and Linda Caligari, Jeffrey and Jennifer Morse, and Ira and Jami Grossman — petitioned the ZBA to enforce the town’s zoning bylaw. They argued that the BNRC was using the land in a residential zoning district illegally for hiking, recreation and hunting without a special permit.

Soon thereafter, Zoning Enforcement Officer and Building Inspector Paul Greene checked the site and ruled that a special permit was not required. In response, the neighbors’ attorney, Matthew Mozian, asked the ZBA to issue a cease-and-desist order directing BNRC to “immediately stop their un-permitted use of land” until they obtain permits.

On June 15, 2021, in a controversial vote, the Zoning Board of Appeals overturned Greene’s findings by ruling that, indeed, BNRC needed a special permit for its recreational activities at Hollow Fields. BNRC responded by filing a lawsuit at Massachusetts Land Court in July seeking to overturn that ruling. The defendants included the ZBA members and the six neighbors on Perry’s Peak Road.

Then, on Aug. 18, Land Court Judge Robert B. Foster ruled that enforcement of the ZBA’s special permit requirement would be paused “until the earlier of (1) a vote of the Town of Richmond Town Meeting to enact a zoning amendment that renders the decision moot or (2) further order of this court.”

But, in response to the neighbors, Foster limited hiking and other recreation at Hollow Fields to 9 a.m. to 5 p.m., requiring BNRC to post signs and a notice on its website that the trailhead would be closed at all other times. He also barred the council from holding any special events at the property.

At a status conference this past Wednesday, a court date was set for May 6 for an update. One newly surfaced issue to be resolved: Proof that Perry’s Peak Road is a town road, not a private one.

Meanwhile, at its monthly meeting last July, the Richmond Planning Board voted to begin work on a zoning bylaw proposal that would allow use of open space and conserved public land by right for public recreation, with no special permit needed.

Board Chairman John Hanson has emphasized that if town meeting voters approve it, the potential zoning change would apply to the entire town, not just Hollow Fields.

At the Planning Board’s September meeting, according to the minutes, a Perry’s Peak neighbor asked why the board had taken up the issue.

“We had become aware that a ruling by the Zoning Enforcement Officer had been overturned after a public hearing before the ZBA, with the findings publicly posted,” Hanson responded. “That sent up a red flag.”

Hanson noted that in his 41 years on the Planning Board, such an overruling had rarely happened. If the enforcement officer and the board did not agree on what was legal, then clarification of the zoning bylaw was needed, he added.

He stressed that because of the Land Court litigation, the Planning Board had never taken up the specifics of what had happened at Hollow Fields. Rather, he said, “we were keeping our deliberations to what would be right for the whole town.”

During its next public Town Hall meeting Monday at 6:30 p.m., the board will continue discussions on the use of open space and conservation-restriction land town-wide.

Members also will discuss a proposed limitation on public events on conserved land, zoning limits on parking lots, adding cultural sites to the zoning change and receive suggestions from the public on the use of protected land.

Any bylaw proposal approved by the Planning Board would then require a two-thirds supermajority approval by a town meeting since it involves zoning. The Select Board would decide when to present it to the voters.

Meanwhile, Jenny Hansell — the BNRC president — is displeased by the court-ordered restriction limiting Hollow Fields access to 9 a.m. to 5 p.m.

“Hollow Fields and the rest of Perry’s Peak was conserved by the town, the Richmond Land Trust and BNRC ‘for public benefit and enjoyment,’” Hansell stated in her Nov. 15 letter to the Planning Board. Public access is required by the conservation restrictions approved by the state, she wrote. “Any restrictions on access (including the requirement of a special permit) would have the unintended consequence of keeping that land for the private benefit of the residents of Perry’s Peak Road.”

Based on hourly reports from trail counters, the average number of visitors per day last year about 20, Hansell commented, compared to 30 in 2020 when attendance spiked because of the COVID-19 pandemic as residents and visitors sought outdoor recreational opportunities. She acknowledged rare days when 50 or more people might walk the Hollow Fields trail, as well as one day during the peak of the pandemic when there were more than 100 visitors.

But Jeff Morse has complained that the trail has forced neighbors to be de facto park rangers of sorts as they decipher if conversations and calls for dogs are more than casual moments.

“It is not why we chose to live at the end of a peaceful dead-end road,” he said.

In their own words...

Additional comments by some of the major players in the legal tangle involving the Berkshire Natural Resource Council’s Hollow Fields Preserve in Richmond, where a court-ordered limit on public access is in place:

“The 9 a.m. to 5 p.m. restriction is in place — we have signs up and notifications on our website and app, as required by the judge. Right now, it's not a big impediment, but as spring comes on, it would be a terrible shame to keep those restrictions in place. Working people wouldn’t be able to visit the property, it would be available only to the very wealthy or retired, five days out of seven. That is not the outcome we hope to see.”

“Nonprofits should be called what they really are: nonprofit businesses. They may have different models than a mom and pop store or a gas station or a Target, but they are businesses nonetheless with quite different objectives — often competing objectives — than that of residents.”

“We want zoning to clearly reflect what all land owners, residents and voters want. ”

Neighbors wanted to limit public use of a Richmond hiking preserve. Town residents voted resoundingly to keep the land open