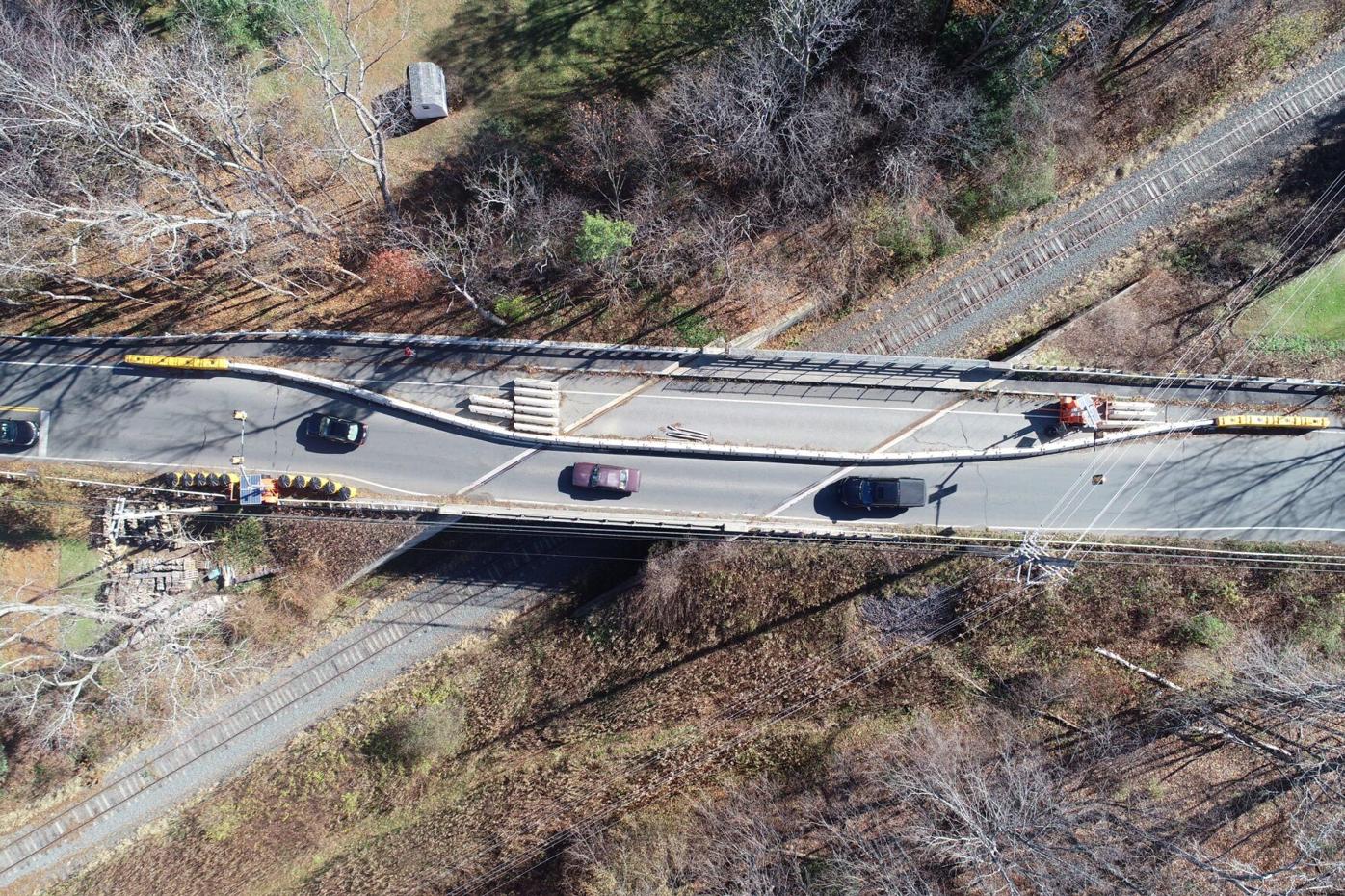 The bridge on Holmes Road in Pittsfield spanning railroad tracks will remain one lane for months to come, with a replacement not complete until 2023, the state now says. 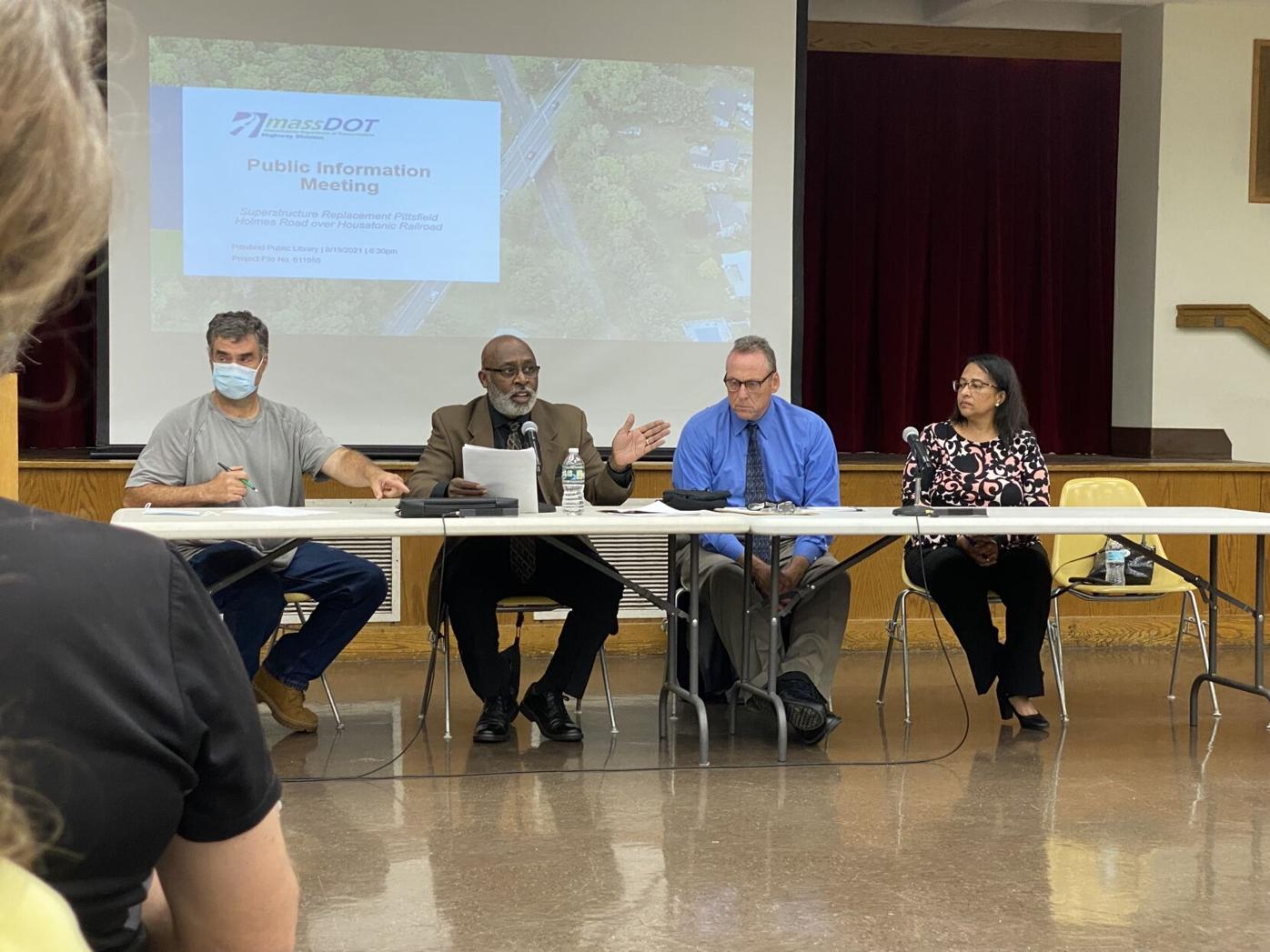 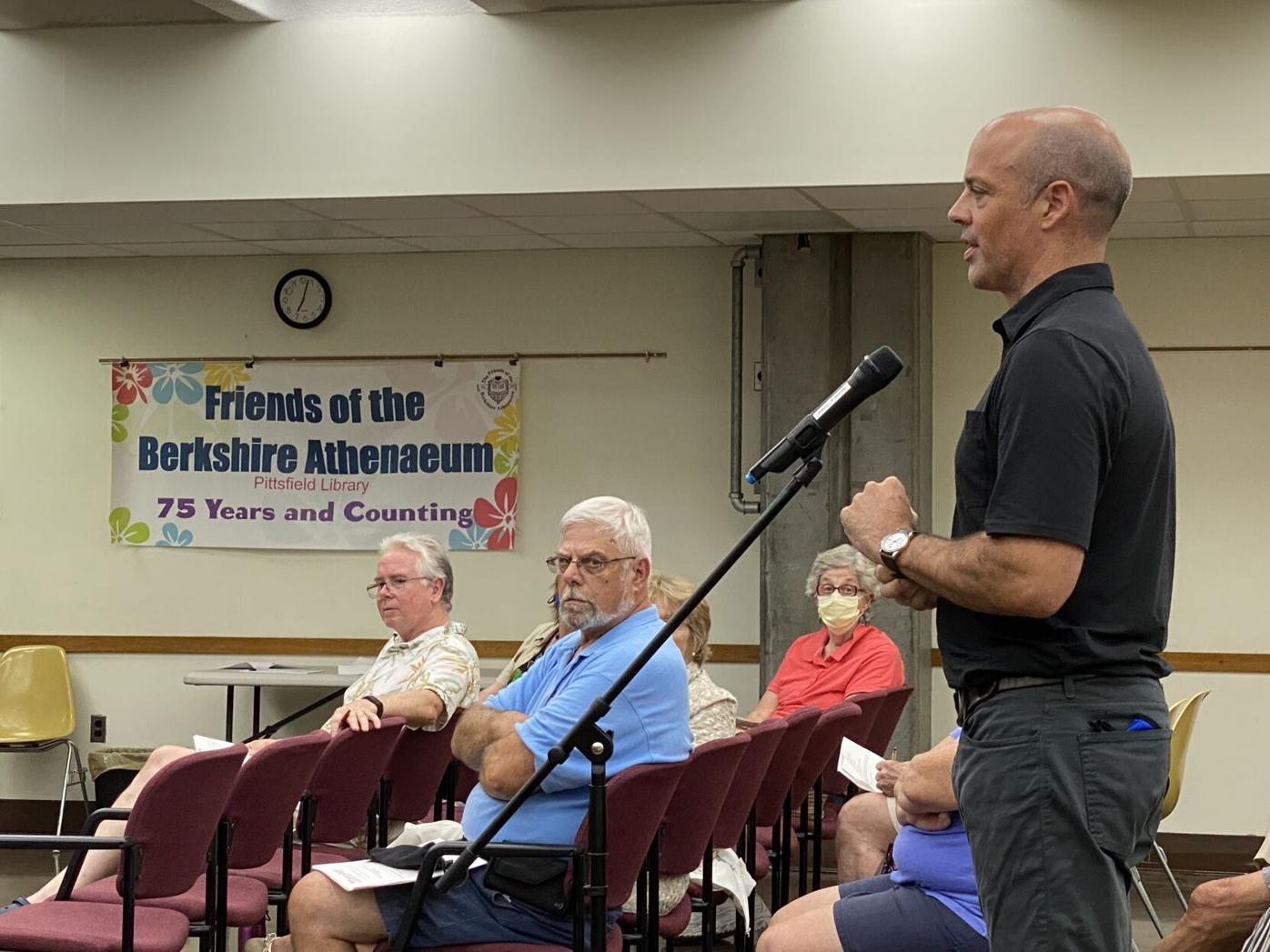 State Sen. Adam Hinds, D-Pittsfield, joins frustrated residents in asking representatives from the Massachusetts Department of Transportation why the Holmes Road bridge won't be completed until 2023. 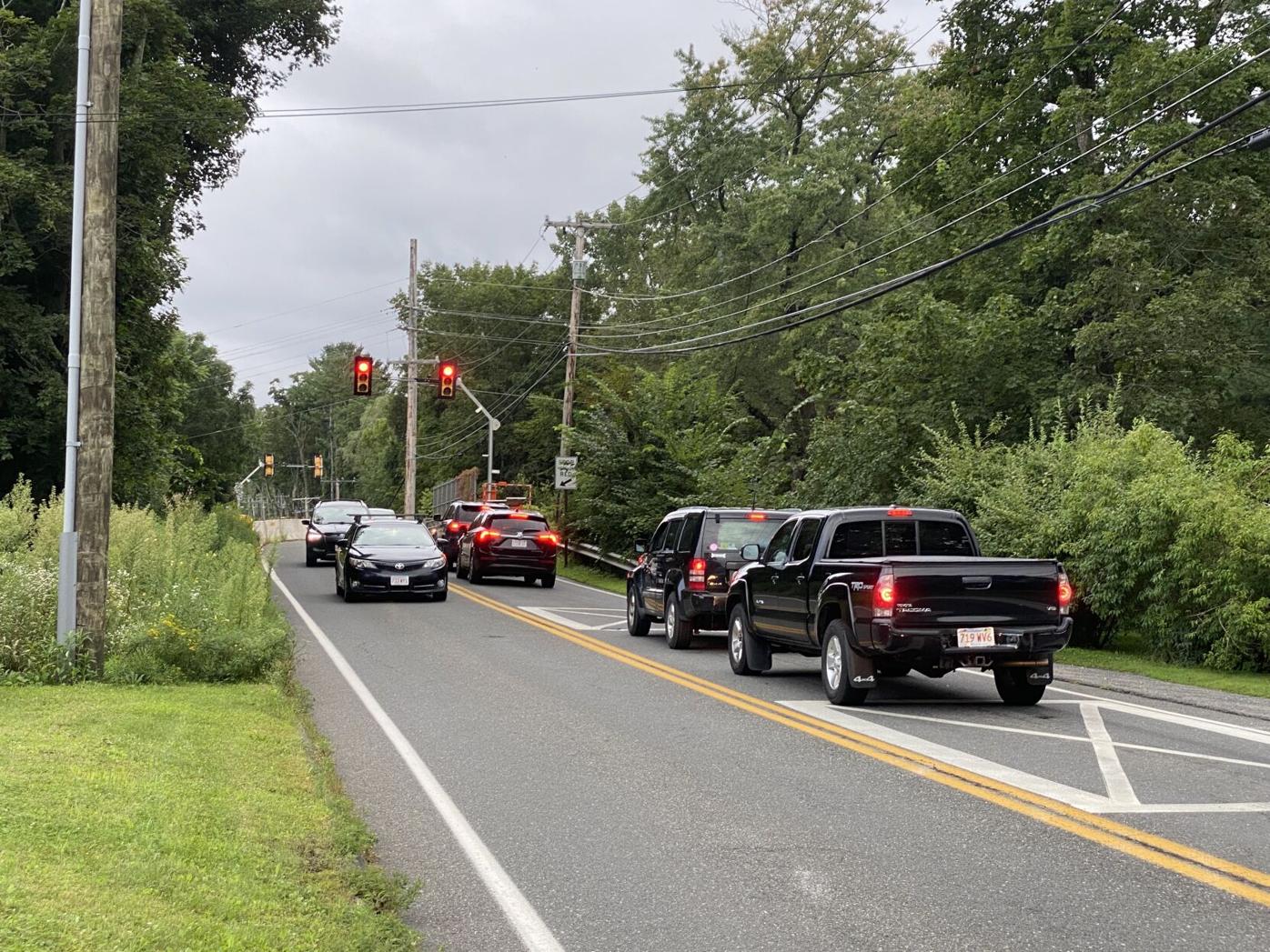 Northbound traffic on Holmes Road on Thursday evening crosses an aging bridge set to be replaced by 2023. Traffic over the bridge has been reduced to one lane since 2018. 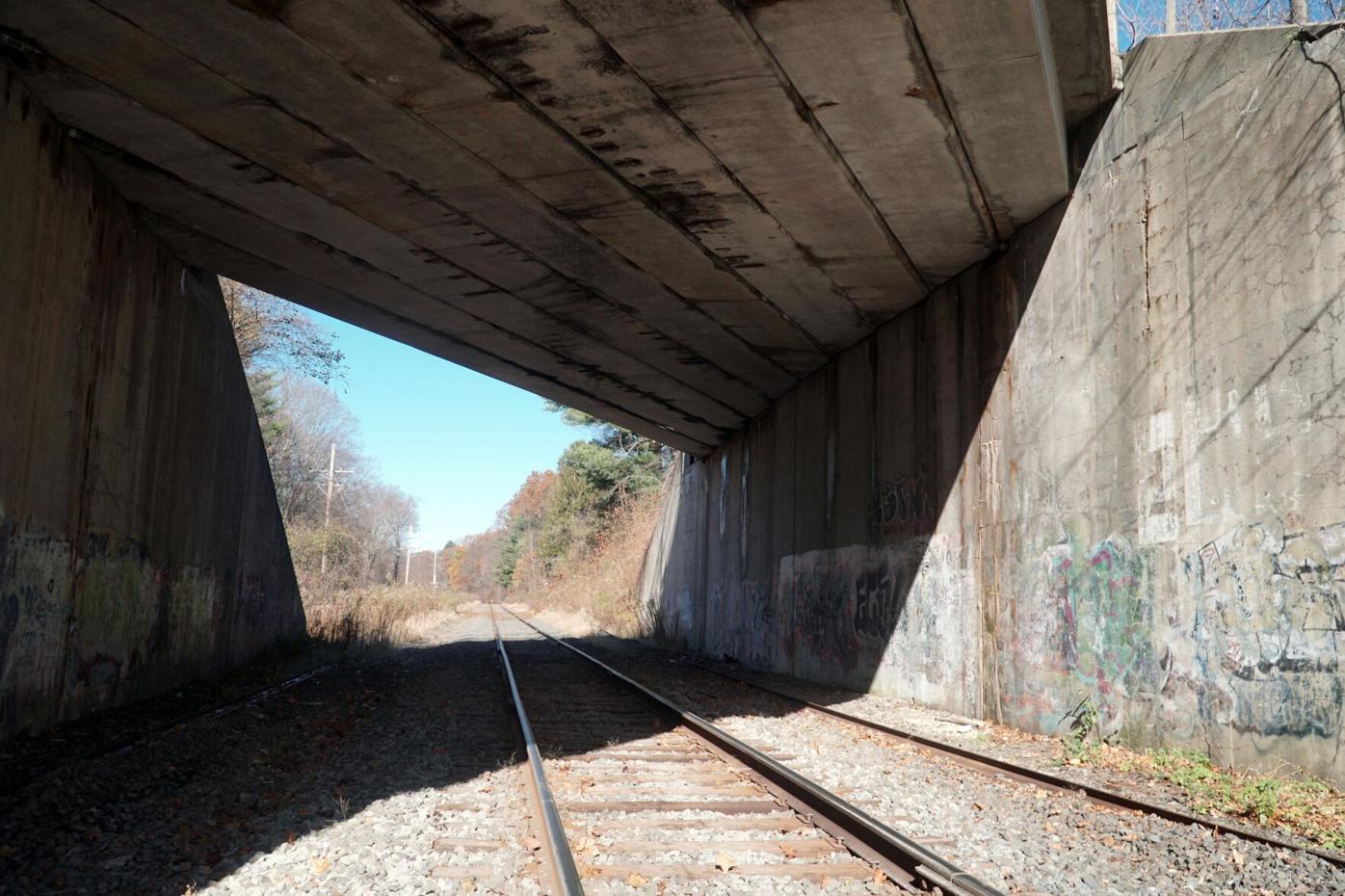 Given the problems that engineers discovered with the beams on the bridge on Holmes Road in Pittsfield, one Holmes resident is left wondering what heavy vehicles are doing to the structure supporting the single lane that remains open.

PITTSFIELD — The Massachusetts Department of Transportation has budgeted about $2.9 million to replace a faulty state bridge on Holmes Road that has forced traffic slowdowns for years. The project will be completed by fall 2023, with the help of federal money.

"It's a state bridge and the DOT has done precious little to make it tolerable for us."

Ingrid MacGillis, who lives beside the Holmes Road bridge

The new bridge would maintain a similar footprint as the existing one in southeast Pittsfield, but again would allow for two-lane traffic, expand the existing sidewalk and add a bike lane on either side of the road, project engineer consultant Joseph Gill told residents and officials during a public meeting Thursday night.

Project manager Bill Brown said there is not a hard cost attached to the project yet, but the $2.9 million budgeted by MassDOT will help cover 20 percent of the construction cost, with the money for the other 80 percent coming from federal government.

The meeting was the first look residents had for a replacement project since the bridge was reduced to one lane of traffic in 2018. In May of that year a bridge inspection revealed problems with one beam in particular, the seventh from the north side of the bridge.

Mark DeVylder, the MassDOT District 1 bridge engineer, said that a load rating report conducted after the inspection showed that that beam had a “zero ton” capacity.

“That was not what we were expecting,” DeVylder said. “We had not anticipated that the bridge closure was coming.”

Why one bad bridge beam slows traffic on Pittsfield road

PITTSFIELD — People traveling Holmes Road in southeast Pittsfield get a little more time these days to admire the neighborhood as they wait for newly erected traffic lights to change. That's …

The state Department of Transportation said in May 2019 that repairs could start in 2020, but nothing materialized. The tentative timeline presented to residents Thursday night has the design portion of the project ending in January, advertising for bids in June and construction beginning in 2023.

Gill said that if work on the bridge was accelerated, the surrounding road might only need to be closed for 60 days. On that timeline, MassDOT would hope to have two-lane traffic on the bridge again before school started in fall 2023.

Residents at the meeting at the Berkshire Athenaeum said they are happy something is being done about the bridge, but wonder why it has taken so long.

“We’ve really been put through the wringer,” said Ingrid MacGillis, who lives next to the bridge. She said traffic backups at the bridge have brought noise and congestion and made it difficult for neighbors to make it in and out of their homes.

“It’s a state bridge, and the DOT has done precious little to make it tolerable for us,” she added.

State and local officials joined residents in asking why it likely will be another two years before there is a solution to an almost 3-year-old problem.

“How do we make sure we’re not going through this ever again in our community and other communities?” state Sen. Adam Hinds, D-Pittsfield, asked project representatives, referring to the lengthy design and funding process.

DeVylder repeatedly told the audience that the local MassDOT office had tried “since day one” to expedite the bridge replacement, attempting to consider timelines and solutions outside the department’s typical options.

“We’ve tried to accelerate this as quickly as we can,” DeVylder said. “We tried some things we don’t conventionally do, but unfortunately, there were too many barriers in the way to do that.”

He added that some accommodations had been made and that if the bridge had been treated as a typical bridge replacement, it likely wouldn’t have received funding until the state’s 2025 budget.

Brown said the current construction timeline attempts to hurry the work with a limited impact on the neighborhood.

While some neighbors voiced concerns about potential traffic detours and emergency vehicle access, MacGillis seemed to sum up the sentiment of the crowd. “If you ask me, you can build the bridge tomorrow,” MacGillis said.

Meg Britton-Mehlisch can be reached at

Letter: Not all bridges are maintained equally

To the editor: I remember the last time the Holmes Road bridge was fixed.