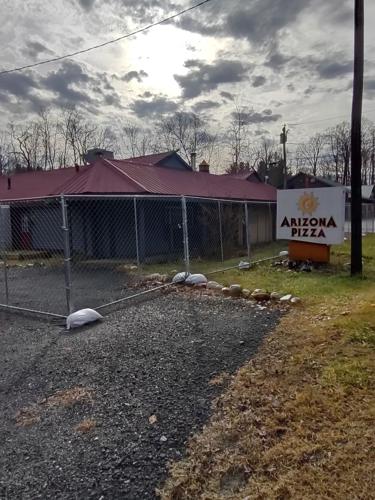 In August, Lori and Lev Kelman, via Zoom, discuss with the Lanesborough Select Board their delay in opening a recreational marijuana-manufacturing/retail store in town. The Kelmans received Planning Board approval Monday to tear down the former Arizona Pizza restaurant and build a 3,600-square-foot facility.

LANESBOROUGH — The developers of Lanesborough’s second approved recreational marijuana store have gone from planning a renovation to planning to build anew.

Lev and Lori Kelman propose to demolish the former Arizona Pizza building on Route 8, and build a 3,600-square-foot site to manufacture and sell cannabis products.

If built — the Kelmans still need approval from the state Cannabis Control Commission to operate — they would join Liberty Market, which opened in late July on Route 7, as the only two pot shops allowed in town.

The Kelmans originally had proposed renovating the vacant 3,135-square-foot restaurant, but the cost escalated to $1.4 million, according to Lev Kelman. For an estimated $1 million to almost $1.2 million, he says, he can have a building constructed.

On Monday night, the Lanesborough Planning Board approved the site plans, which didn’t include cultivation, something the Kelmans hope to eventually get approval for — using shipping containers retrofitted to grow marijuana.

In its decision, the board reserved the right to approve the aesthetics of the new building.

“By growing in shipping containers, there is no odor. The smell doesn’t penetrate the metal,” Lev Kelman said by phone Wednesday.

“I will start by making edibles and drinkables. Our product will be much better than what’s on the market: the cleanest, healthiest, tastiest edibles,” Lev Kelman said.

Kelman is no stranger to pot-related products. He told the Select Board in March that he uses medicinal marijuana and four years ago he began selling hemp chocolate bars at his store, Brooklyn Dark in New York City, which he opened in 2011.

His website notes that the hemp seeds have no THC, the active chemical in marijuana that provides the high for users.

The chocolate produced here would contain THC, and would be sold at the Lanesborough store and on the wholesale market in Massachusetts.

Since the cannabis store location on Route 8 is zoned for recreational marijuana production and retail, the project does not require a special permit.

As for parking and traffic flow, Royal Hemp would have 33 parking spaces. The entrance/exit would be on Route 8, and a police detail would handle traffic control during the first few weeks of operation, according to the developers’ written plans.

The developers say the building would be set back from the road enough to prevent any potential long lines of people waiting to get into the store backed up to the state highway.

The Kelmans moving forward was good news for the Select Board, which had threatened to dissolve the mandatory host community agreement it had with the couple.

In August, the three-member panel was upset that the Kelmans had not made any progress, the board and town planners having signed off on the original project in summer 2019. The selectmen also were unhappy about the look of the property — with overgrown vegetation and garbage. The site since has been cleaned up, and there is a chain-link fence around the building to keep out humans and critters.

Kelman said he is doing his best to meet town demands, but is frustrated by what he calls “Lanesborough red tape.”

“I would like more support from the community, but I have to fight tooth and nail to get approvals,” he said.