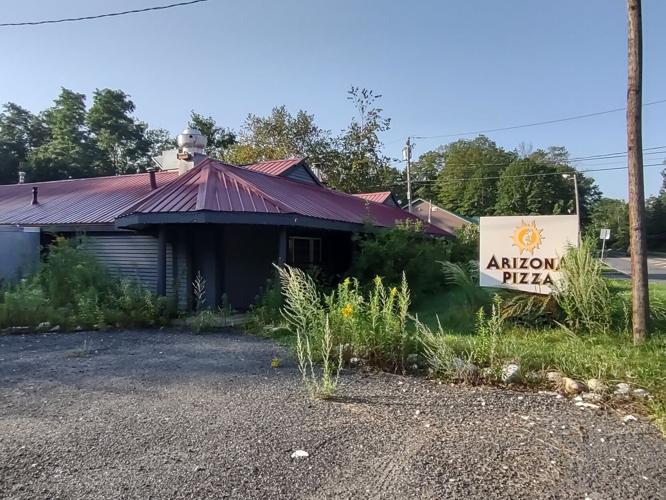 Weeds and saplings have overgrown the site of the former Arizona Pizza in Lanesborough. The Select Board wants the owner to clean up the property and obtain a building permit by Oct. 5 or risk having its agreement with the town voided to convert the restaurant into a cannabis manufacturing/retail complex.

Lori and Lev Kelman, via Zoom, discuss with the Lanesborough Select Board on Monday their delay in opening a recreational marijuana manufacturing/retail store at the former Arizona Pizza on Route 8.

LANESBOROUGH — The Select Board plans to pull the plug on the town’s second proposed recreational marijuana store if the developer fails to show progress by early October.

The board has given New York City chocolatier Lev Kelman and his wife, Lori, until Oct. 5 to secure a local building permit to show the project is moving forward at the vacant Arizona Pizza on Route 8.

In addition to the building permit, the Select Board wants the Kelmans to have the property’s exterior cleaned up and better maintained, as it has become an eyesore. The building is being overrun by weeds and saplings.

“It looks awful,” Selectman Michael Murphy said during the board’s Zoom meeting with the Kelmans on Monday.

The couple, under the name Royal Hemp LLC, plans to manufacture and sell cannabis-infused chocolate at the former pizzeria across from the northern entrance to the Berkshire Mall. Royal Hemp has purchased the eatery, which closed in February 2018.

Two summers ago, the Planning and Select boards signed off on the project, with the Select Board on Jan. 25 granting the Kelmans more time to start work.

Select Board Chairman John Goerlach told the couple he is ready to seek out someone else to open the town’s second pot shop because of the lack of activity on the site. Lanesborough has a limit of two cannabis stores, with Liberty Market the first to open, last month on North Main Street.

“[Since] it’s been so long that nothing’s happened, I would be reluctant to grant you more time, unless you’re going to get a building permit prior to Oct. 5,” Goerlach said.

The Kelmans were asking for another extension to start work because of setbacks in finding a reputable contractor, and because the cost to rehabilitate the 3,135-square-foot building went from about $200,000 to $500,000.

“It has no foundation. The building was a dud that I wasn’t expecting. I’m trying to do my best,” Lev Kelman said.

The Kelmans say they are ready to secure investors to help finance unanticipated increased startup costs, and that it will take some time to shore up the building and get it ready for use.

Kelman is no stranger to pot-related products. He told the Select Board in March that he uses medicinal marijuana, and four years ago he began selling hemp chocolate bars at his store, Brooklyn Dark in New York City, which he opened in 2011.

His website notes that the hemp seeds have no THC, the active chemical in marijuana that provides the high for users.

The chocolate produced here would contain THC, and would be sold at the Lanesborough store and on the wholesale market in Massachusetts.

Since the proposed cannabis store location on Route 8 is zoned for recreational marijuana production and retail, the project did not require a special permit.

But, the Select Board could void the state-mandated host community agreements it has with the Kelmans, one each for the manufacturing and retail portion of the cannabis operation, if they don’t meet the Oct. 5 deadline.

In addition to the 3 percent community impact fee assessed through the agreement, the town also would assess a 3 percent sales tax on any product sold wholesale and retail.

This story has been modified to correct Lori Kelman's first name.