LEE — A family business that has operated in Lee for a half-century will drop use of one of its properties, after being cited by the state Department of Environmental Protection.

The agency says L.B. Corp. has been running a materials recycling plant at 525 Woodland Road without a required state permit. Use of the 2.6-acre property has been controversial, even before the DEP notified the company Jan. 6 that it is not in compliance with environmental laws.

“We feel it’s in our best interest to go to another facility."

Steven A. Garrity, the company’s president, said Monday that rather than seek a permit, the company will move.

“We feel it’s in our best interest to go to another facility,” he said.

Garrity said L.B. Corp., founded by his family in 1969 as the Lee Blacktop Corp., has been processing building materials on the property for five years. Garrity family members bought the land in 2017 from Jerrold S. Crowell for $85,000.

Garrity said no decision has been made about future use of the parcel.

The DEP gave L.B. Corp. 14 days to tell it how it will come into compliance. It was given 180 days to obtain a permit or remove all the materials deemed to have been processed without a permit. 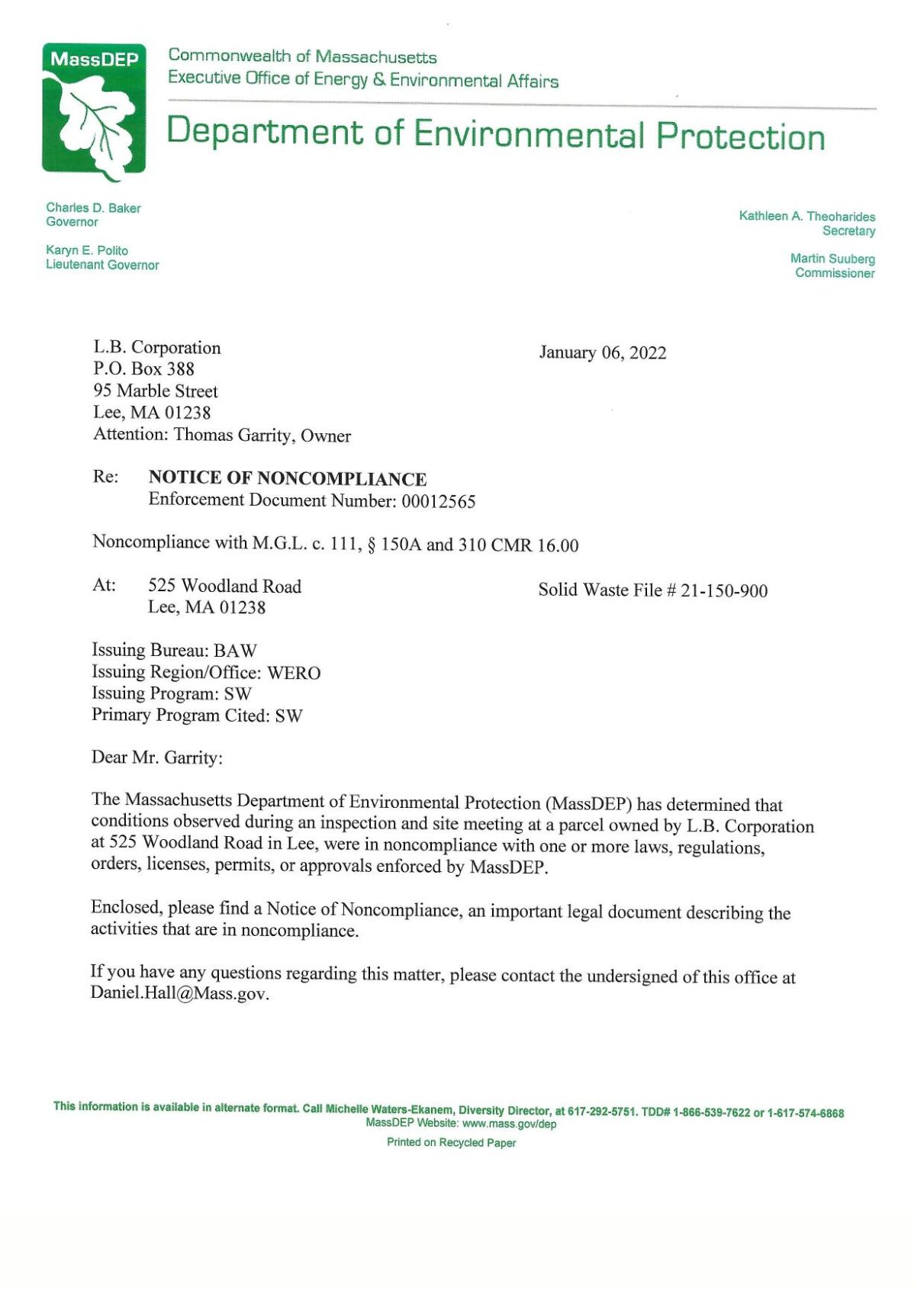 Last year, the company sought to have the zoning changed from Conservation-Residential to Industrial. Attorney John W. Graziano argued, in a letter to the Select Board, that the area already was dominated by industrial uses — including the fact that it is “boxed in” by a 75-acre tract the General Electric Co. bought for $6.2 million and expects to use to dispose of PCB-contaminated soils as part of the Rest of River cleanup.

The Environmental Appeals Board has not yet ruled on a local challenge to the plan the company reached in February 2020 with the federal Environmental Protection Agency and area communities. That agreement allows all but the most hazardous concentrations of polychlorinated biphenyls — as much as 1 million cubic yards of tainted sediments — to be buried in an “Upland Disposal Facility.”

In its finding this month, the state DEP said it visited the site Dec. 1, along with Steven and Thomas Garrity. The agency said it observed at least 1,000 cubic yards of unprocessed and processed materials on the property, along with equipment used to crush and screen materials such as asphalt, brick and concrete.

L.B. Corp. is a general contractor with main offices at 95 Marble St. in Lee. Its services include demolition, excavation and paving.

Though the Lee Planning Board scheduled a public hearing last May on a proposed zoning change, the board later that month withdrew a proposed town meeting article to that effect.

In his February 2021 letter to Lee officials, Graziano said that in addition to the GE property, neighboring parcels include an electricity transmission right of way already designated as industrial.

“If the map were being drawn today, this parcel would certainly be included as part of the industrial zone,” Graziano wrote.

Graziano acknowledged at the time that the site was being used for materials recycling.

On June 17, 2020, the town’s building inspector issued a cease-and-desist order against L.B. Corp., citing misuse of the property. When the company notified highway officials in Lee and Lenox, they expressed sympathy and said the action would increase their disposal costs.

“Hopefully, it can be resolved quickly for all of our sakes,” came a reply from William J. Gop, superintendent of the Lenox Department of Public Works.

“This will … add time and cost,” wrote Alan Zerbato, of the Lee Department of Public Works.

Graziano, the company’s lawyer, submitted both those email responses as part of his case for rezoning the site. The documents also confirm that recycling had been taking place.

A month later, on July 27, 2020, B.J. Church, the building commissioner and zoning enforcement officer for both towns, rescinded the violation notice, saying a mistake had been made.

“Removal of earth materials in connection with municipal road construction is allowed by right,” Church wrote, “to the extent that earth is being removed to provide for the repurposing of road materials for town projects, including all municipal projects involving the Town of Lee or any other municipalities.”