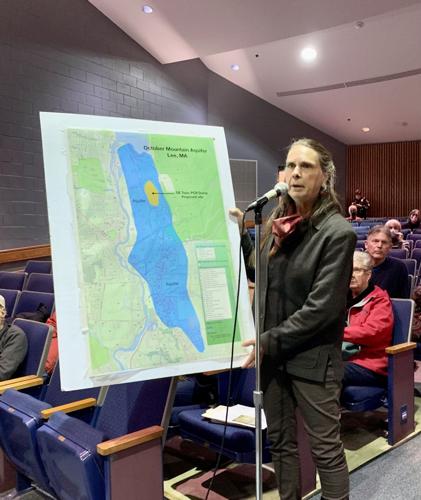 Gail Ceresia shows the Lee Board of Health the proposed dump's location as it relates to the aquifer and water runoff from October Mountain. She says that water could be contaminated if the dump liner leaks. 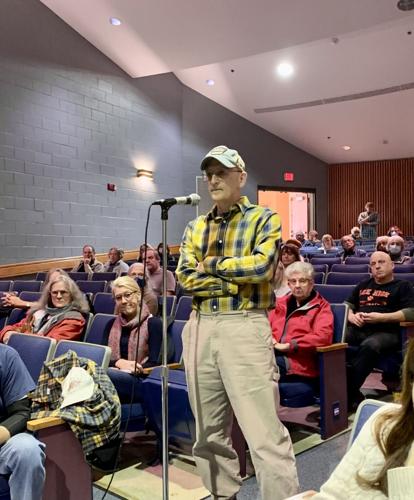 David J. De Simone, a geologist, says a leaking liner would likely cause penetration of PCBs into the aquifer through permeable soil at GE's proposed dump site. 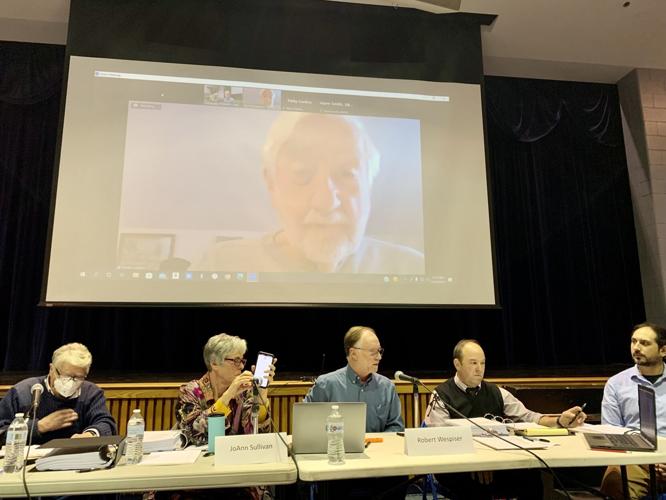 The Lee Board of Health, with attorney Cristobal Bonifaz, far left, at its hearing Saturday to determine whether General Electric Co.'s proposed Upland Disposal Facility for PCB contaminated sludge will pose a health risk to residents. Speaking on the screen is Dr. David Carpenter, a PCB expert.

LEE — Will the dump’s liner leak PCBs into permeable earth and will they reach the aquifer? A geologist says they could.

And what about the 48,384 yearly dump truck runs through the streets of Lee over a period of four years?

Those 15-ton trucks will each carry PCB-laden mud to the Upland Disposal Facility after being dredged from the Housatonic River as part of the Rest of River cleanup.

Will the sludge spill or leak from the sides and undercarriages of trucks during transport? Will any dust go airborne?

How these and other elements of General Electric Co.’s PCB disposal plan will affect the health of Lee residents and those in surrounding communities is being taken up by the Lee Board of Health, which held an adjudicatory hearing Saturday in the Lee Middle and High School auditorium.

The board’s involvement was prompted by the nonprofit Housatonic River Initiative, which is appealing the current cleanup in federal court.

If the board decides the dump will be a health threat, another question arises.

Does the board have the legal right to stop it if it flies afoul of local laws? The board says state law gives them the right. The EPA says it doesn’t.

It’s a question that could land in the state’s highest court.

Meanwhile, the board — armed with Conway-based environmental attorney, Cristobal Bonifaz, known for litigation against Chevron — is forging ahead.

It’s collected technical and other expert documentation to help it decide, and will allow 30 days for the submission of more testimony and other pertinent information that relates specifically to the threat to human health posed by the dump.

The exhibits so far were culled from a number of sources including existing documents from the Environmental Protection Agency, which reversed course in 2020 to allow the contaminated sediment to be stored locally after rejecting the permit in 2016.

GE has sought to dispose of the sediment in the Berkshires to avoid the $200 million cost to ship it out of state to a facility licensed to accept toxins like PCBs.

At forum, Lee residents grapple with ways to undo approval of PCB landfill

But notably absent from the hearing were company representatives as well as EPA officials, though the agency has referred the board to its record.

GE is another story. The board stated in its hearing notice that GE’s lack of participation will be taken to infer that the company “has no evidence” that the dump will not be a hazard to the community.

The testimony of one award-winning geologist in particular has the board worried.

David J. De Simone, a retired professor and consultant, explained that it is his view that the underlying sand and gravel aquifer as well as the Stockbridge marble aquifer include “bedrock fractures” and are permeable.

He said the landfill and its liner are designed to be effective.

“But should they ever leak, there would not be a barrier to further spread of the contamination,” De Simone said. “They’re fantastic feats of engineering, and they work really really well until they leak. A leak could form during construction. You could tear the liner and not know it.”

While the EPA agrees with De Simone’s permeability analysis, the agency says he didn’t take into account factors such as low PCB concentrations and the nature of the chemicals, said Dr. Robert Wespiser, the board’s chairman.

De Simone also said that he hasn’t seen data like “well logs” from borings that could help him understand the risks with total certainty.

Dr. David Carpenter, a Albany, N.Y.-based physician and professor known for his work on the health hazards of PCBs “volatilizing” into the air said this is another concern.

While he’s not opposed to secure landfills, they need to be in the right spot.

Residents of Lee and other communities pointed to a host of unknown risks.

Claire Leahy, a Lee resident and former statistical analyst said GE hasn’t presented proper data that could forecast problems — like the consequences of climate change or tree cutting — that could affect the stability of the dump.

Denny Alsop, a longtime clean water activist, asked the board to consider that the dump is going into a community already long-exposed to PCBs and other contamination whose interaction might present other hazards.

Cornelia Kalisher wonders what impact the dump could have on the drinking water reservoir.

Others worried about airborne contamination after the mud is deposited in the dump but it isn’t yet capped.

Dr. Wespiser said the management and transport of the dreaded mud is “a major concern of ours.” He noted that GE has not addressed this in its plan.

Gail Ceresia is a wetlands scientist and a town Agricultural Conservation Commissioner who lives in Lee. She said there are more wetlands in the area than the EPA has recorded, and that the abundant water flowing westward off October Mountain will be in the path of the landfill and where the dump trucks will travel.

“If the landfill leaks, [PCBs] will go into that water,” she said. “It’s not just the [dump] that we’re talking about — it’s the whole procedure.”

Cindy Mathias asked the board to do a cancer study in Lee as well as baseline test of PCB levels in the reservoir. She also worries about the dump trucks coming from all over.

“That’s the most dangerous part of this whole situation,” she said. “We’re getting everybody’s [pollution] — we’re getting Sheffield, Stockbridge, we’re getting Great Barrington, we’re getting Housatonic — everybody, you know, signed off on this and put it on to our little town.”

Proposed Lee PCB ‘dump’ to be discussed by local health officials. But do they have the power to intervene?

The Tri-Town Boards of Health unanimously approved a motion by Lenox member Dr. John Kearns to plan an educational session on the Upland Disposal Facility — “and then decide where we go from there.”