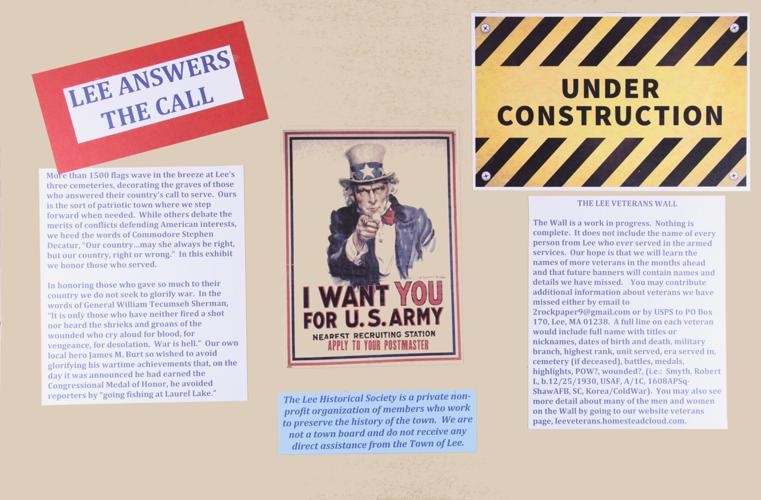 Lee Historical Society's exhibit "Lee Answers the Call" opens Friday and runs the month of July. The display honors all Lee veterans who have served in the military since the American Revolution. 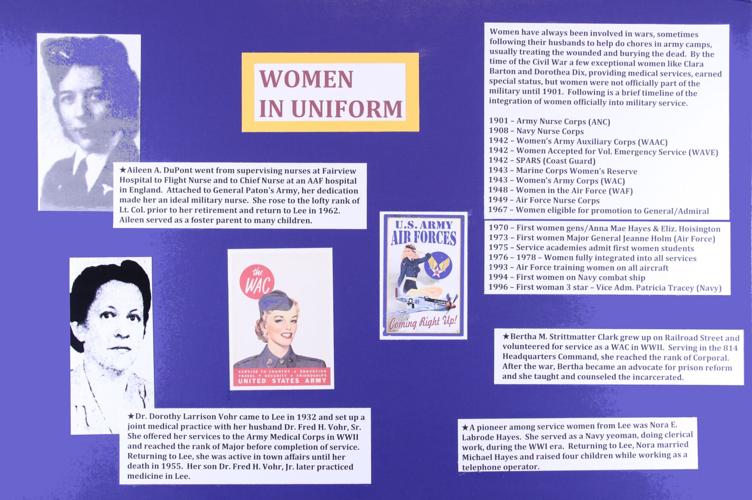 Women in Uniform is one part of the exhibit. 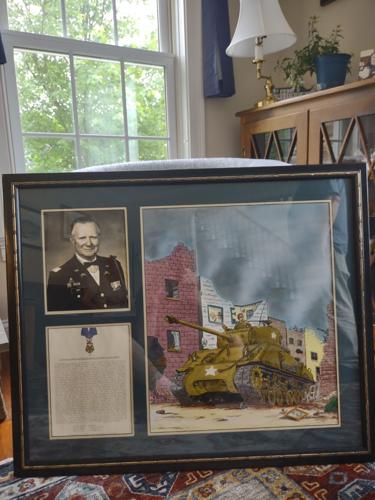 LEE — Steve Moody was dumpster diving near Fort Hood in Texas in 2008 when he came across an item honoring Lee's only Congressional Medal of Honor recipient, Army Capt. James Burt.

Displayed in a large frame was a picture of Burt in his dress uniform, an illustration of a tank and a written description of the tank commander's heroics in World War II during the Battle of Aachen in Germany in October 1944.

Moody retrieved the frame and sent it to the Lee Chamber of Commerce, where the executive director at the time was Phil Smith. Smith, in turn, had the item donated to the Lee Historical Society.

"We believe it may have been part of an exhibit and was simply tossed away," said Smith, now a society member. "We wrote very elaborate letters thanking [Moody] as he shipped us the frame at his own expense."

For the month of July, the Burt tribute will be part of a comprehensive exhibit titled "Lee Answers the Call," which honors all from Lee who served in the military, dating back to the American Revolution. The display, put on by the society, officially opens Friday in the J. Peter Scolforo Gallery at the Lee Library.

The exhibit features the Lee Veterans Wall, with the names of all of the men and women from Lee who served. When assembled, the wall will be about 36 feet long.

"The wall has veterans who were born in Lee, died in Lee, and lived in Lee. Obviously there are other towns that will claim them, but we wanted to be inclusive, not exclusive," said exhibit researcher and society member Karen Norton.

The exhibit stems from a project that began about a year ago with a state grant to inventory the graves of Lee veterans.

"This grant was to improve access to veterans information and develop a central place for background on Lee veterans," said society member William Mathews.

The society began collecting information from grave sites and catalogued over 1,000 veterans in the town's three cemeteries over a two-month period.

"There's a general buried at Fairmont Cemetery, Joseph Whiton, who moved to Lee. He was a general during the War of 1812," Smith said.

Organizers expanded the project to include all Lee veterans, bringing the total to 1,500. Then Norton did further research, using 16 different sources of public records and found more veterans, growing the list to about 2,400.

"I have since developed an addendum to the list with 200 more names to be added to the wall," Norton said. "I'm sure there will be people who see the exhibit that will give us a name we don't have."

The exhibit has numerous photographs, write-ups of veterans and personal items, such as the medals donated by the family of Michael Whalen, killed in Vietnam in 1969.

The majority of Lee residents who died serving their country were the 38 killed in action or that died later from wounds suffered during the Civil War. Lee Memorial Town Hall was built to honor those from town who died in America's bloodiest conflict.

Norton found in her research that answering the call to duty, for many, was a family affair.

"There were a lot of families that had grandfathers, fathers and sons, some all served in the same branch of the military," she said.

The most common surname on the veterans wall is Smith, including Phil Smith, who has lived and worked in Lee for more than 25 years. Smith served in the Air Force from 1954-58.

"I'm very proud and very proud that my family served. I had a grandfather on my father's side who was in the Civil War," he said.

Added Mathews: "I didn't serve but I admire the people who did and the character they brought to the community should be recognized and honored."