LEE — Members of Lee‘s top board did not misstep legally, a judge says, when they decided to accept a PCB landfill as part of a dramatic reset last year on plans to remove toxins from the Housatonic River.

The decision, released Friday by Berkshire Superior Court Judge Michael K. Callan, is a blow to local opponents of the landfill.

Judith C. Knight of Great Barrington, their attorney, had argued in a civil suit filed in March that Lee officials violated the state Open Meeting Law, disregarded their own bylaws and exceeded their authority in voting Feb. 4, 2020, to endorse a breakthrough “Rest of River” settlement.

Knight said Monday she respectfully disagrees with the judge’s decision and plans to speak with her clients this week about a possible appeal.

The plaintiffs have 30 days to ask the Massachusetts Appeals Court to hear the case.

“This is important to the community. We’re going to look carefully at all of our options and decide what to do next,” Knight said.

Callan’s decision, unless it is appealed, removes one of two current legal challenges to the Rest of River plan outlined last December by the EPA.

Early this month, the EPA’s decision to allow local disposal of lower-levels of tainted soils was challenged by two environmental groups in oral arguments before the Environmental Appeals Board in Washington, D.C. That court has not yet ruled.

In the 2020 settlement, Lee and four nearby towns joined with the General Electric Co., the Environmental Protection Agency and other parties to keep all but the highest levels of materials tainted with polychlorinated biphenyls in the Berkshires, rather than shipping all such chemicals out of state, as the EPA first ordered.

Four Lee residents want a court to decide whether civic leaders exceeded their authority when they agreed to allow an old quarry to house toxic chemicals without bringing the issue to residents.

Callan’s decision found for the defendants on all counts, saying the plaintiffs failed to make a claim on which relief could be granted. The plaintiffs are Caroline Young, Andrea Wadsworth, James Castegnaro and Clare Lahey, the judge’s decision said. The original complaint named Robert Jones as a plaintiff, but Young was substituted in after Jones was elected to the Select Board, Knight said.

Along with the town itself, the suit named three current or former members of its Select Board: Patricia Carlino, David Consolati and Thomas Wickham.

Lee officials are on record saying they acted in the town’s interests. At a meeting in January, they rejected calls to overturn their approval. As part of the agreement, Lee is to receive $25 million. 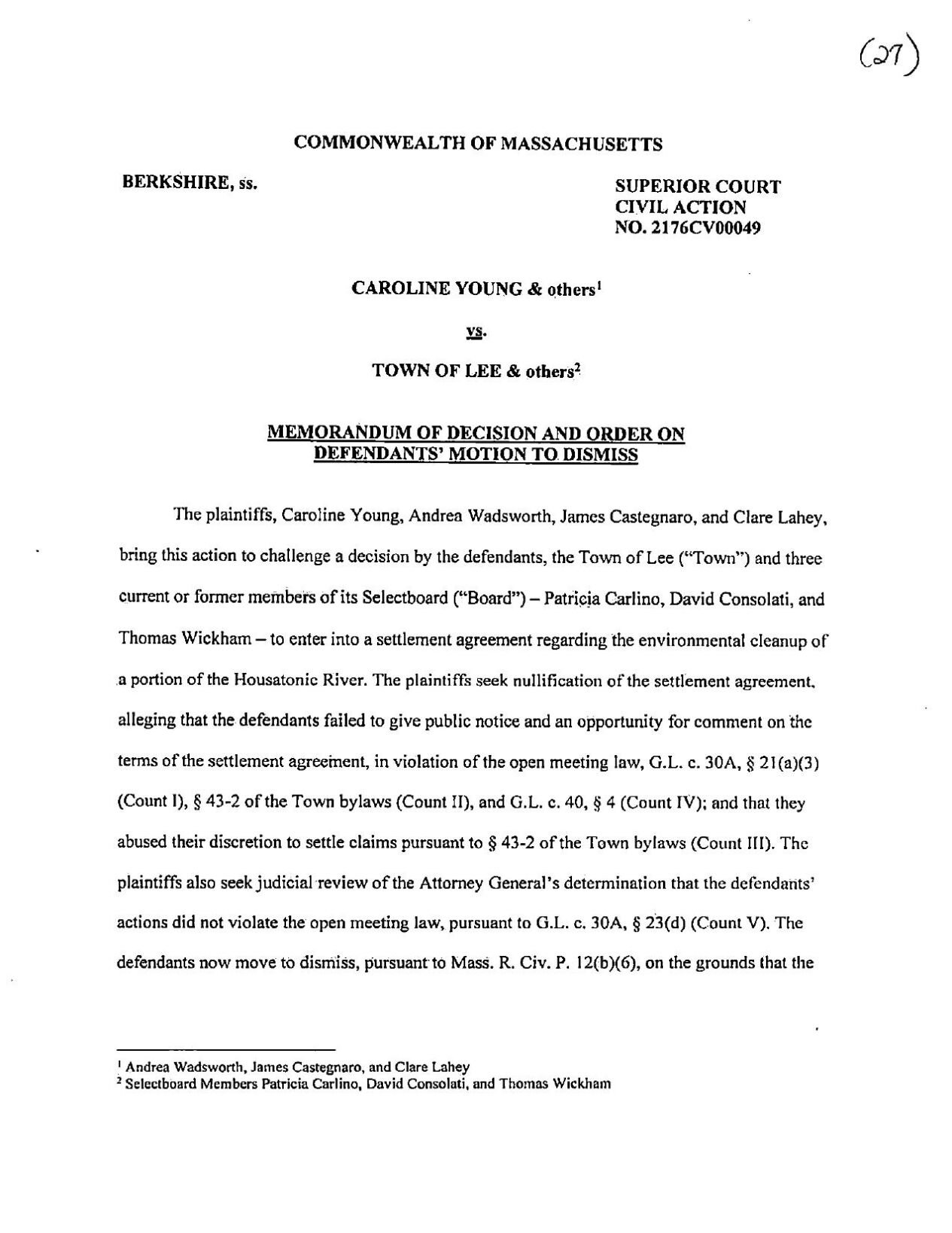 In the local lawsuit, Knight and her clients claimed that Lee officials violated the Open Meeting Law by going into executive session to discuss a matter that the plaintiffs claimed had already been decided. Callan found that the statute related to open meetings allows private discussion of potential lawsuits. The judge said the suit failed to set out facts to back up its claim that the board abused the exception related to executive sessions.

In early March, the state Attorney General’s Office rejected a specific Open Meeting Law challenge related to the decisions made by Lee and boards in the other four local towns to support the settlement.

In the Lee case, Callan also rejected the suit’s claim that the town board violated local bylaws by agreeing to a settlement, when those bylaws limit board discretion to cases that pay out under $1,000. Callan noted that in this case the town is poised to pay out nothing, but, rather, receive $25 million by agreeing to host the landfill, in a former Lane quarry south of Woods Pond.

How we got here: A timeline on the Rest of River

Here is a timeline of the process leading to the Housatonic Rest of River cleanup settlement agreement.2000: The U.S. District Court in Springfield issues a decree requiring specific actions for 25 …

Knight’s suit had argued that the board exceeded its authority to enter into the settlement agreement. Callan, however, determined that Lee’s bylaws allow a community’s leaders, acting in their “corporate capacity,” to make such decisions.

In a March interview, Knight said that Lee’s representative town meeting should have made the call to accept more than 1 million cubic yards of tainted soils and sediments at the planned Upland Disposal Facility.

“The Select Board acted independently without the authority of town meeting, which is a violation of their duty to the town,” she said at the time. “For them to do this in secret and not put it before town [residents] is shocking.”