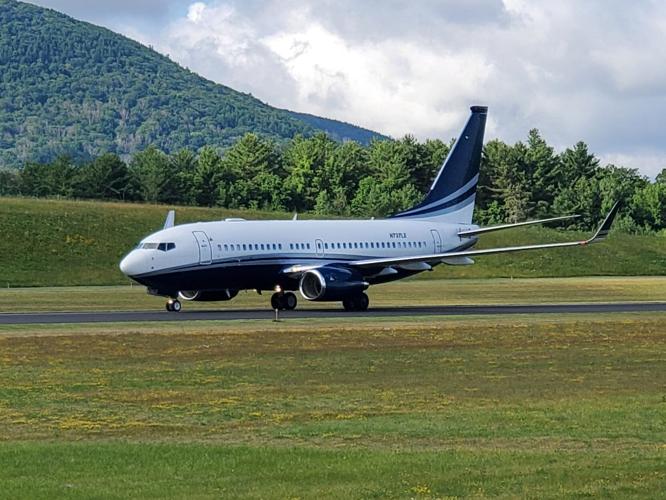 The Twitter feed for the Pittsfield Municipal Airport shared this image of the Boeing 737-700 owned by Len Blavatnik landing in the city on July 13. 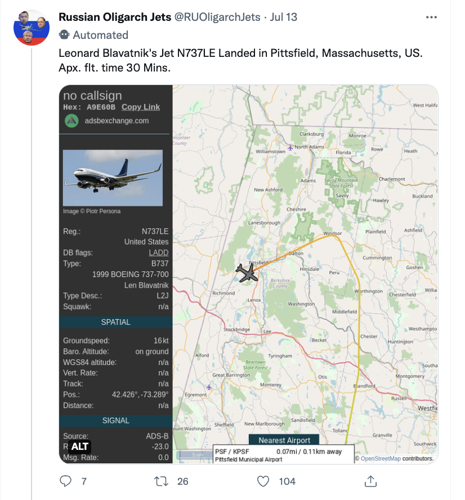 The Twitter feed Russian Oligarch Jets posted about the Pittsfield landing on July 13. 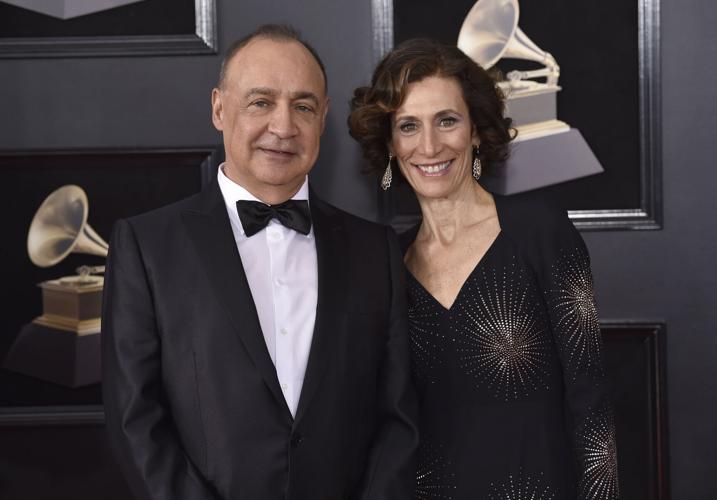 Len Blavatnik, left, and his spouse, Emily Appelson, arrive at the 60th annual Grammy Awards at Madison Square Garden in 2018.

PITTSFIELD — Quick stop at a dispensary? Catching a show at Tanglewood?

Those were questions posted by followers of a Twitter account, “Russian Oligarch Jets,” after it tracked a jet owned by one of the world’s richest men to a morning landing in Pittsfield.

Along with tweets that were less kind.

A Boeing 737-700 owned by billionaire Len Blavatnik landed at Pittsfield Municipal Airport at 8:48 a.m. on July 13, according to the automated tracker that posts to Twitter. It took off the same day, a Wednesday, just a few hours later.

The Pittsfield airport itself posted a video of the landing, without identifying that the jet is owned by Blavatnik, who Forbes lists at the moment as the world’s 42nd richest person.

Born in the 1950s in the Soviet Union, Blavatnik moved to the United States in 1978 at around age 21 after earning a bachelor’s degree at Moscow State University. He became a U.S. citizen in 1984 and holds dual British citizenship. In the U.S., he received a master’s degree in computer science from Columbia University and then an MBA from Harvard University.

Though Blavatnik cut his early ties to Russia, and is not the target of current government sanctions against oligarchs over Russia’s invasion of Ukraine, he got rich through his association with a man who has been sanctioned. Forbes magazine reports that Blavatnik’s early wealth stemmed from his connection with Viktor Vekselberg and investments in Russian oil and aluminum companies.

Even before the war against Ukraine began this year, a Blavatnik spokesman told Forbes that he is not Russian and has never considered himself Russian. “And is not an oligarch,” the spokesman told the magazine.

His net worth is today calculated to be around $30 billion. Over the years he has given hundreds of millions to charities and schools, including Harvard and Oxford universities. He was knighted in 2017 by Queen Elizabeth II in recognition of his philanthropy. He is a big contributor to both major U.S. political parties.

Though aviation trips are recorded and public, it isn’t known who was aboard the 737 that landed in Pittsfield, or why it came to the city for just a few hours.

July 13 wasn’t the first time a jet of roughly this size landed in Pittsfield, but it is rare, said Dan Shearer, the airport manager. Jets that come in and out of Pittsfield tend to be mid-sized, like Citations and the Gulfstream IV, he said.

“Although a Boeing 737 is one of the most common aircraft in the world, it is unusual for us because the vast majority of them are used in scheduled, commercial flights,” he said.

The 16-passenger jet, built in 1999 and once owned by the General Electric Co., left Pittsfield just before noon, according to the Russian Oligarch Jets Twitter feed, returning to the New York City area – first to White Plains and then to New York Stewart International Airport, in Newburgh, N.Y.

Blavatnik has a home in the White Plains area, as well as an East Side townhouse and Park Avenue apartment in New York City. His most valuable residence, though, is believed to be his Kensington Palace Garden mansion in London, worth an estimated $250 million.

Did you notice the abnormally large aircraft fly over downtown #Pittsfield this morning. @PolarisAviation landed their beautiful 737-700 BBJ land at PSF. pic.twitter.com/aGw8yIJO9p

The Newburgh airport is listed as the jet’s home base, where it is managed by Polaris Aviation Solutions LLC. The flight tracker shows repeated trips in and out of that airfield.

The timing of the trip to and from Pittsfield did not coincide with performances in that time frame at Berkshires venues – too early even for matinees of “Once” at the Berkshire Theatre Group and “Man of God” at the Williamstown Theatre Festival.

The Russian Oligarch Jets Twitter tracker calculates fuel used, fuel costs and CO2 output. The jet’s morning flight July 13 from White Plains to Pittsfield, covering 96 miles, consumed an estimated 406 gallons of fuel at a cost of $2,799. That leg of the trip alone produced four tons of CO2 emissions, according to the tracker.

In the past two months, the Blavatnik jet has crossed the Atlantic Ocean, on trips that took passengers to France and Italy. A July 8 flight from Bordeaux, France, to JFK International Airport consumed $45,435 worth of fuel and produced an estimated 69 tons of CO2 emissions.

According to the Environmental Protection Agency, the average passenger vehicle in the U.S. produces 4.6 metric tons of CO2 emissions in a full year, based on 22 miles per gallon and 11,500 miles traveled.

Since visiting Pittsfield, the Blavatnik jet has traveled to Portland, Maine, to an airport in the Hamptons on Long Island and to Nice, France, among other places.

That jet is just one of several Blavatnik owns, according to the website Super Yacht / Fan. He also owns a yacht called Odessa II, named for his home town in Ukraine.

A Forbes profile says Blavatnik took in $7 billion when he sold a stake in a Russian oil company in 2013. His net worth leapt again when he took Warner Music Group public, after acquiring it for $3.3 billion in 2011, and saw its value quadruple.

As of Sunday, Forbes’ “real time” tracker listed Blavatnik’s net worth at $29.8 billion. That’s down $2.7 billion from an earlier figure this year.

The investment company he runs, Access Industries, has ownership interests in LyondellBasell, a chemical company; Rocket Internet, which does e-commerce; and other businesses, including Tory Burch, a fashion company.