The School Committee recently voted unanimously to submit a grant request to the Massachusetts School Building Authority to address environmental and structural problems at the building, including ongoing asbestos infiltration.

Other priorities supporting the need for renovations include potential loss of accreditation because of obsolete science classrooms and labs; increasing energy conservation and decreasing energy-related costs, and replacement of, or additions to, obsolete buildings lacking enough classroom space. 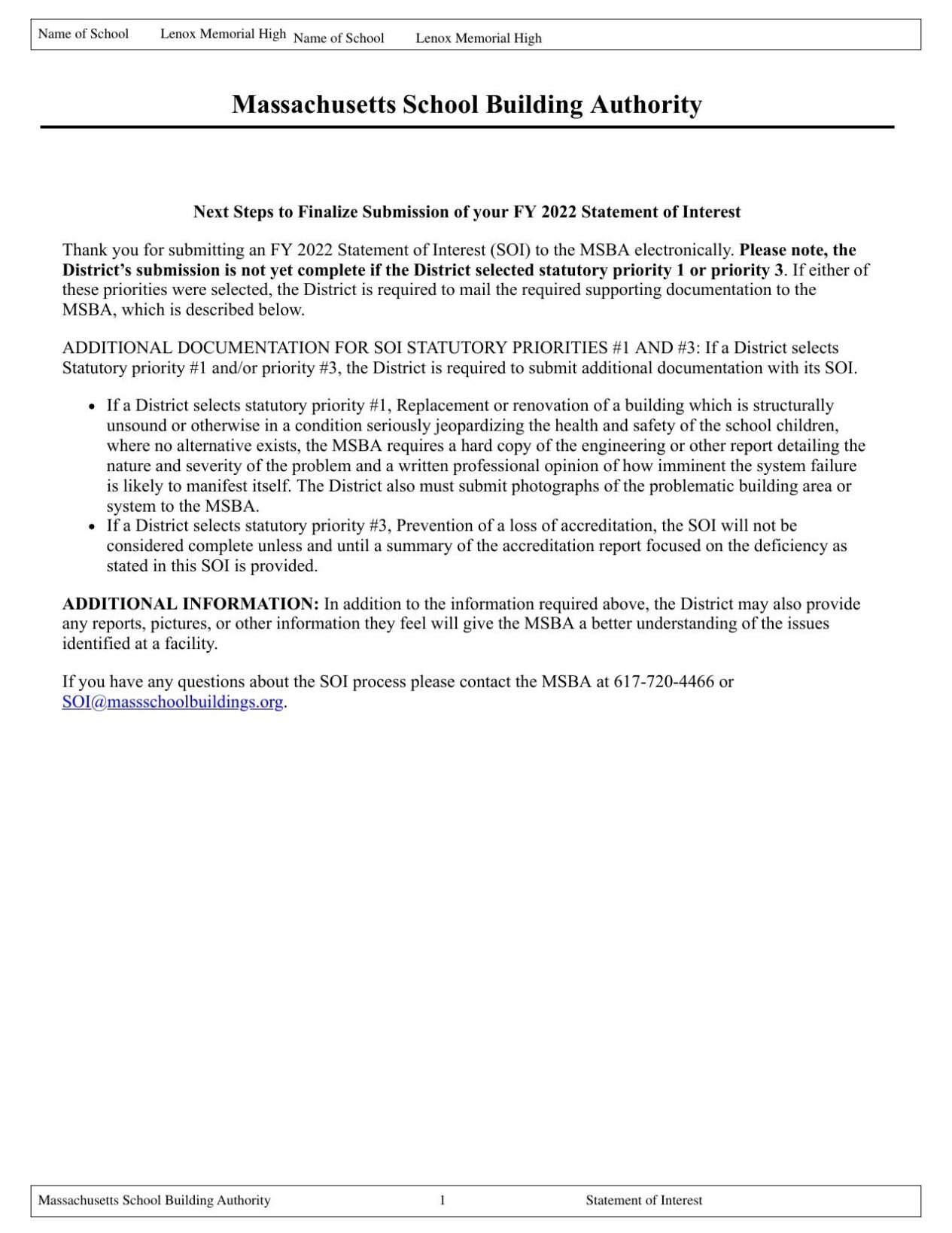 Some of the specific concerns listed in the document sent to the state include:

• Locker rooms built in 1965 not fully compliant with equity laws.

• More than 40 percent of teachers required to share classrooms.

• Gender equality issues in the restrooms.

• Floor and wall cracking/separation taking place throughout the building.

The preliminary “statement of interest,” signed by Superintendent Marc J. Gosselin, Town Manager Christopher Ketchen and School Committee Chairman Robert Vaughan, was sent to the building authority by the April 29 deadline for this year’s submissions.

It places the school district somewhere in a long line of applicants from other districts statewide, including Berkshire Hills Regional School District in Great Barrington.

There are no cost projections yet for any work that eventually might be approved by the MSBA, typically a partial match with local taxpayer funding.

“This is just the beginning, we’re just trying to get MSBA’s attention,” Vaughan said. He noted that it took 15 years for the state authority to approve funding support for the Central Berkshire Regional School District’s rebuild of Wahconah Regional High School in Dalton, which cost nearly $73 million.

“So this could be years down the road,” he said. “We hope not, we hope that they’ll pay attention to us pretty quickly. We hope it won’t be as long as Central Berkshire’s, but we have to recognize that a lot of towns across the commonwealth submit every year. The MSBA evaluates them on the needs for their buildings, so we don’t know where we fit in.”

In the statement filed with the MSBA, Vaughan noted that he focused on exterior walls, the asbestos problem and “the perception among faculty, and perhaps parents and students that a portion of the building is unsafe.”

He also pointed out that “the three science classrooms in the high school wing have been an issue for 20 years or more” with facilities that are outdated or dysfunctional.

The town’s Select Board also voted recently to support the statement of interest, as required by the MSBA.

“This is not an endorsement of doing this project, it’s just to get us to stand in line for consideration,” said Select Board Chair Marybeth Mitts. She pointed out that the Berkshire Hills Regional School District is re-applying to the state to support funding for a renovated or rebuilt Monument Mountain Regional High School.

“I’m not sure how the school building authority is going to look at a request like ours when we’re a district of less than 1,000 students,” she added.

A just-completed engineering report from DRA Architects in Waltham, presented to the School Committee recently, reviewed physical deficiencies inside and outside the original 1966 high school building, which was expanded 25 years ago to include a middle school wing, a library, auditorium and gym space.

The contamination first emerged in March 2021 when a fierce windstorm caused small amounts of debris containing the fire-retardant substance to fall from the ceiling in a number of classrooms and offices, and part of the cafeteria.

The school district spent close to $650,000 on a cleanup of the dislodged material containing asbestos, requiring LMMHS to close the building for six weeks. In 2019, interior wall and tile repairs cost at least $320,000.

New cracks are appearing and there is additional infiltration of asbestos fibers from window frames, requiring further environmental work and air quality monitoring, the statement to the building authority noted. “So neither solution has provided a permanent fix,” according to the document.

With the exception of environmental issues, “the good news is that the building has been generally well-maintained,” Carl Franceschi, the president of DRA, told the School Committee. “The things we’ve identified are not unusual for a building of this vintage.”

He explained that “there are not critical things that need investment immediately, if you were to renovate, there are many that don’t meet code or could be greatly improved with a replacement.”

Franceschi urged continued investment into the building since the state “likes to help those who help themselves,” but “you want to be smart about it.”

Energy conservation upgrades can be addressed while awaiting a MSBA decision on potential grants. He also urged upgrades of the school’s HVAC (heating, ventilation and air-conditioning) system.

The document submitted to the state acknowledges that submission of the statement of interest does not guarantee the acceptance or approval of a formal application, the awarding of a grant, or any other funding from the authority. Nor does it commit the Lenox school district to file an application for funding to the building authority.

Any eventual capital project involving a state grant and local funding would require two-thirds approval by voters at an annual or special town meeting.

• “Replacement or renovation of a building that is structurally unsound or otherwise in a condition seriously jeopardizing the health and safety of school children, where no alternative exists.”

• “Prevention of the loss of accreditation.”

• “Replacement of or addition to obsolete buildings in order to provide for a full range of programs consistent with state and approved local requirements.”