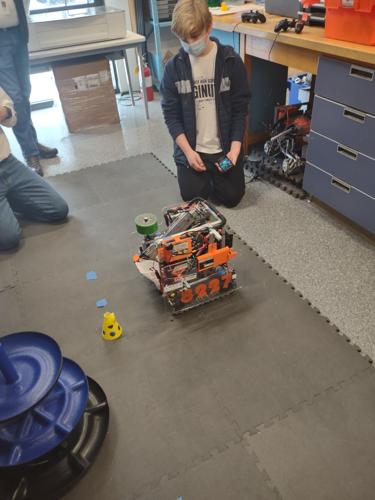 Stefan Zygawski demonstrates a robot for Team Enginuity at Lenox Memorial Middle and High School. Enginuity is coming off a solid performance at the First Tech Challenge state tournament, where its finished 14th out of 32 teams. 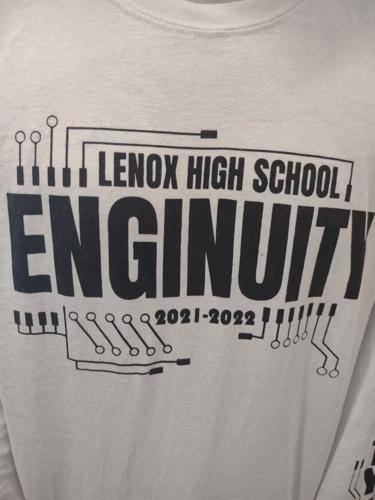 A T-shirt for Team Enginuity, which has a pit crew that makes sure the robot — it's named "Not a Toaster" — is functioning and no parts come loose.

LENOX — High-tech academics take center stage next week, when the robotics team at Lenox Memorial Middle and High School shows off the skills that made it one of the top teams in Massachusetts this winter.

Team Enginuity will stage a pep rally March 18, during the last class period of the school day.

“We will be giving a brief demonstration of the robot’s capabilities, and the school will be introduced to the Robotics Club members,” said Matt Cote, the team’s co-coach and mentor.

The team is coming off a solid performance at the First Tech Challenge state tournament Saturday, March 5, where its finished 14th out of 32 teams. In all, 125 commonwealth schools participated in First Tech this school year. The competition’s theme was “Freight Frenzy” — the robot had to load cones and blocks resembling freight.

Team Enginuity had gone undefeated, winning all five matches during a qualifying competition in mid-February.

Freshman Stefan Zygawski said the robot did well during the first 30 seconds of each match.

“We had one autonomous code — the robot driving itself — where we got a lot of points,” he said.

The robot — it’s named “Not a Toaster” — had some issues during the state competition, but it ended up performing as the 12th-best robot at the matches, according to Cote.

Junior Talia Giardina was one of the robot builders who had to make initial adjustments during the early stages of construction.

“We had some size problems, where the robot didn’t fit the size requirements, but we just made it,” she said. “We cut some holes and shortened some pieces.”

The robotics season begins at the start of the school year, as students review that year’s competition tasks and begin designing and building their robot. The robot is the result of “hundreds” of hours of work, according to the team.

“We started in mid-September, meeting twice a week for two hours each day. It is a long season and requires a huge commitment from all involved,” Cote said.

The season consisted of three all-day competitions and two all-day weekend sessions with other schools.

Each year, the arena is a 12-foot-square field with four robots — two “red” versus two “blue,” forming two teams or alliances. The challenge is different every year. Sometimes it involves scoring with balls and cubes; other times, it’s blocks and towers, according to Cote.

“During the first 30 seconds, the robots run by themselves. Stefan had to program the robot to do multiple things,” said co-coach and mentor Jim Currie.

Added Cote: “You don’t get to practice with your alliance team, you have to strategize on the fly.”

Team Enginuity also has a pit crew that makes sure the robot is functioning and no parts come loose. Sophomore Owen Hart is the team mechanic.

“I look over the robot, making sure it works properly and making sure everything is tight and stays together,” Hart said.

While the robotics program is challenging and time-consuming, team members have fun along the way. For the state tournament, Giardina made cookies with robotic-themed frosting.

“We can get kind of silly, as we have lots of fun,” Cote said. “We got more comments from other teams on our cookies than on our robot.”

Our Opinion: Congratulations to Lenox's Team Enginuity — we ought to cheer for our schools' robotics like we do sports

From time to time, we use this space to congratulate local sports squads who make their Berkshire schools and communities proud at the upper l…