LENOX — Six candidates vying for three School Committee slots called for a wide range of educational options and equal opportunities for all students, whether or not they are college-bound, during a remote campaign forum this week.

Also vigorously debated was whether to continue grouping students in classes according to academic ability through a “tracking” system.

Several candidates emphasized a commitment to diversity, equity and inclusion. 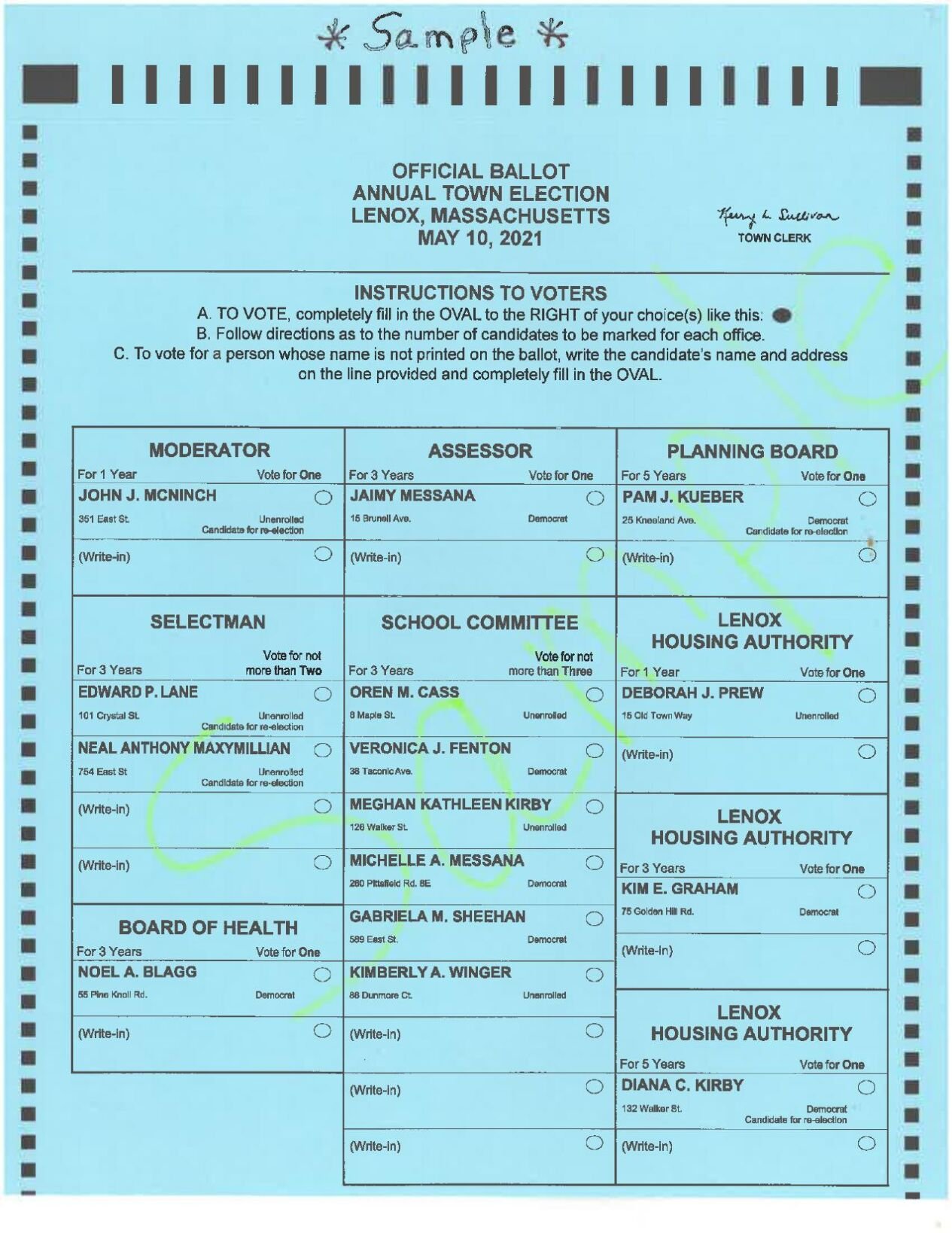 At least 110 people viewed the Zoom session Wednesday night, organized by the Morris Elementary School PTO and moderated by School Committee Chairman Robert Vaughan. Eight questions from the public, submitted in advance, were posed by Priscilla France of the PTO.

The six-way race is the only contest at Monday’s annual town election. The top three vote-getters win the three-year committee seats.

Incumbents Neal Maxymillian and Edward Lane are running unopposed for new three-year positions on the Select Board. Town Moderator John McNinch is unopposed for another one-year term.

Candidate Meghan Kirby, an occupational health and safety consultant for area businesses and the mother of three Morris Elementary students, stressed that “it’s incredibly important for everybody to feel heard, their voices being respected.” She maintained that while many students pursue college education, “that’s not realistic for every learner. We need to look at what barriers are in place for those students that might not feel that they have another option.”

Gabriela Sheehan, an area teacher specializing in multilingual learning and the parent of three young children in the local schools, praised the “outstanding faculty and curriculum” but with “ample opportunities to improve” through “robust, applicable, relevant professional development for teachers and strong, more creative programming for all students.”

She pointed out that “not all students are academically inclined; a lot of them have different learning styles.” Sheehan called for “honoring the voices of the [Lenox Education Association]” in contract negotiations and make sure that “what they’re asking for is beneficial not just to the children, but to the entire community. If we’re paying attention to what their requests are, we’re bettering Lenox for every single person that lives here.”

Oren Cass, the founder of a public policy nonprofit and the father of three young children, called for collaboration with the union representing teachers and staff “to understand what the teachers think they need and how that aligns with the town’s priorities.”

“Look at what are reasonable salaries, what other districts are spending, what we can afford, say that we want to be a place that teachers want to be and do it in a way that uses the town’s resources as well as possible,” he said. “It’s a negotiation, and the School Committee is there to represent the town’s interests.”

Veronica Fenton, an attorney and former School Committee member from 2010 to 2016 and with three children who graduated from local schools, declared that “there have been students in our district who have not had their needs met in the way they should. It’s very important to examine how we can improve.”

She asserted that many students from diverse backgrounds “have not felt welcome,” although they adapted and received a good education. “But, others have left the district because they’ve been harmed by racist things that have been said, as well as anti-LGBTQ things,” Fenton said.

Michelle Messana, a substitute teacher at Lenox Memorial Middle and High School who attended the local schools, urged an emphasis on mental health, not only for students struggling with multiple responsibilities, but also for teachers “managing their home life and all the responsibilities they have in their jobs.”

Kim Winger, president of the Morris PTO and the parent of four children, described herself as “a voice for the community.” During union negotiations, she suggested steering a middle course by balancing the needs of the teachers with those of the community to benefit everyone.

Cass called for a focus on students considering pathways other than college.

“I don’t think we do as good a job presenting that full set of options and serving kids who might opt for them,” he said.

Responding to a question about whether Lenox no longer should group students by academic ability, Messana voiced support so students can work together to learn from each other’s strengths and weaknesses.

But, Cass expressed strong opposition, saying that “grouping everyone in one bucket doesn’t serve them very well. … Our priority has to be delivering a great education to all students by providing classrooms, teaching and curriculums that will meet them where they are, and that means assessing where they are and providing the right kind of education for them.”

Candidates were asked to describe the most challenging factors facing the schools, how they would meet the challenge and why they are best qualified.

Winger cited “not being able to retain our students,” since she has heard that some are choosing to go elsewhere because of “some diversity issue, or the school not meeting their needs academically. … I’m just passionate about the community, the school. I love doing what I can to make a difference. I would make the best decision that was right for us.”

Fenton called for “self-examination, to understand how we’ve gotten to a place where students are not typical, maybe students of color or immigrant background, have not felt as welcomed as we want to think they have.”

She stated that what “our students and our communities are telling us is that we have a lot more work to do. That should be job No. 1.”

For Messana, the greatest challenges include “the mental health and well-being of students and teachers.” She asked for voters’ support “as a local kid, and I’m very passionate about our school system; we have a wonderful system, and I hope to move it even further.”

Cass called for a “huge priority” to ensure a normal return to school in the fall “through preparation and policies to make that happen.”

Sheehan said that “we need to diversify our programming and come up with creative new things, to invent ideas that haven’t been on the table yet.”

Kirby suggested “giving our teachers the resources and time they need to do more check-ins with students to make sure everyone’s doing OK.”

The forum is expected to be available on Community Television for the Southern Berkshires Channel 1302 and on demand via the community broadcaster’s website, ctsbtv.org. It also likely to be posted on the district website, lenoxps.org.

During the remote forum for six Lenox School Committee candidates, each was asked to describe what’s special about the school district:

“I love seeing children get together with all different skill levels and capabilities.”

“So many students have a sense of pride, cheering each other on in sports, and it feels like a very strong sense of community.”

“Even during the pandemic, when things have been so hard, you can tell the teachers really love their jobs, and it says something for the culture of the schools that teachers feel respected, confident and gracious enough to approach parents with extreme professionalism, kindness and care.”

“It’s a close-knit community; other parents that I know all look out for your kids; it’s a wonderful place.”

“What’s incredibly special is the size of the district; there aren’t that many districts that have stayed independent and kept their own elementary through high school, where classes are maybe 45 or 50 kids. I think we’re in a fairly stable place right now, and finding ways to preserve that and make sure we can keep this so unique as a small, independent district is a big priority for me.”

“We are a community, we are a family; our classes are so small that we know each other and care about each other in and outside the classroom, and for life.”