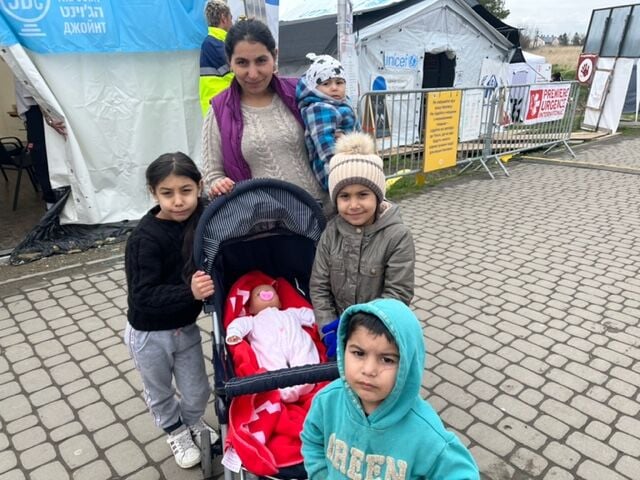 A Ukrainian family pauses for a portrait in Medyka, Poland, after leaving their home country due to the war. 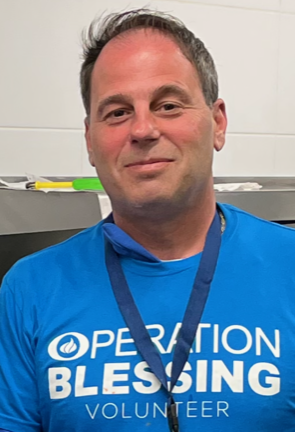 A view of food, water, blankets and other humanitarian aid being provided by "Operation Blessing" in Medyka, Poland, on the Ukrainian border. Pittsfield's Michael Mazzeo volunteered with the relief effort for two weeks in April.

PITTSFIELD — Amid the streams of families fleeing war in Ukraine, there was something about this one that struck Michael Mazzeo, a Pittsfield man volunteering to provide relief at a border crossing.

A young woman arrived pushing a stroller with a baby, accompanied by three other children ages, 3, 4, and 5 years old. The scene tugged at his heart.

“They came to us with just about nothing,” Mazzeo said, recalling the moment. “They had two bags of belongings. We gave them another stroller, hygiene kit and blankets. We comforted them and directed them to a bus to be relocated.”

Mazzeo, co-owner of Mazzeo’s Ristorante in Pittsfield, spent two weeks in April as a volunteer with ”Operation Blessing” handling out food, water and blankets to Ukrainian refugees who crossed into Medyka, Poland.

From April 15-30, except on Sundays, Mazzeo took shifts with the 40-year-old nonprofit, run through the Christian Broadcasting Network.

The organization has conducted humanitarian and disaster relief efforts in 90 countries, including the United States, according to its website.

“Operation Blessing” left its headquarters in Norfolk, Virginia, on March 2 and has been in Poland ever since. In addition to relief efforts in Poland, the nonprofit has worked to get food, water and supplies to areas hardest hit by Russian artillery and invaded by Russian troops.

“CBN is such a solid organization, filled with people who care,” Mazzeo said. “I saw the difference we made because CBN knows what these people are going through.”

The United Nations estimates that 4.5 million Ukrainians have fled the country since Russia invaded the country in late February. Some were experiencing a full-scale war for the second time in their lives, having survived World War II.

“One woman I met had endured Nazi Germany when she was six, but managed to escape the horror of the war at the start of her life,” Mazzeo said. “Now, a woman who could barely walk was escaping war near the end of her life. It was very easy to admire her. She had a lot of pride and was resilient.”

Mazzeo said saw between 500 and 1,000 refuges every day. Those coming through the “Operation Blessing” area, in southeastern Poland, thanked the volunteers, he said, as they braved the cold and the rain that fell almost every day.

“Our mission was to warm their stomachs and warm their hearts. We were told not to get emotionally attached to them,” he said.

"The first night I was there I wondered, 'What the heck am I doing here?' But the refugees traveled great distances in the cold and rain, so it didn't seem so bad for me."

Nevertheless, Mazzeo said he was moved by what he saw, and realized how blessed he was, as he stayed with four other volunteers in a two-bedroom apartment during the two weeks.

“The first night I was there I wondered, ‘What the heck am I doing here?’ But the refugees traveled great distances in the cold and rain, so it didn’t seem so bad for me,” he said.

Mazzeo says he made a pledge to help children, given that he doesn’t have any of his own. He said he would return to Poland in a heartbeat. “I learned a little bit goes a long way. My time there showed I was helping people,” he said.