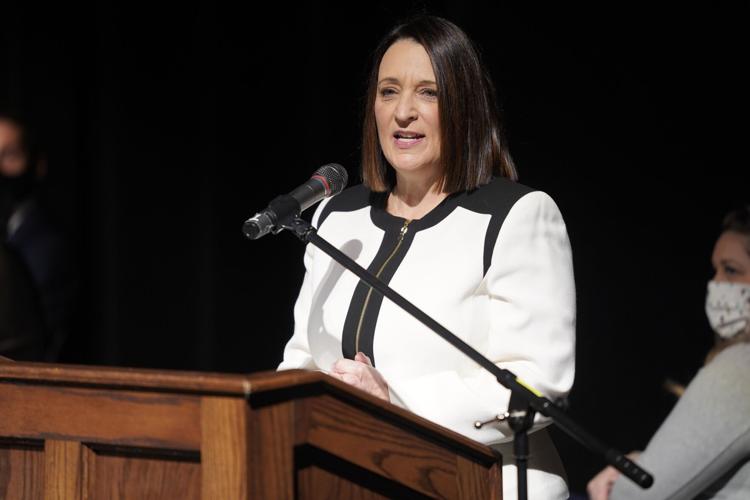 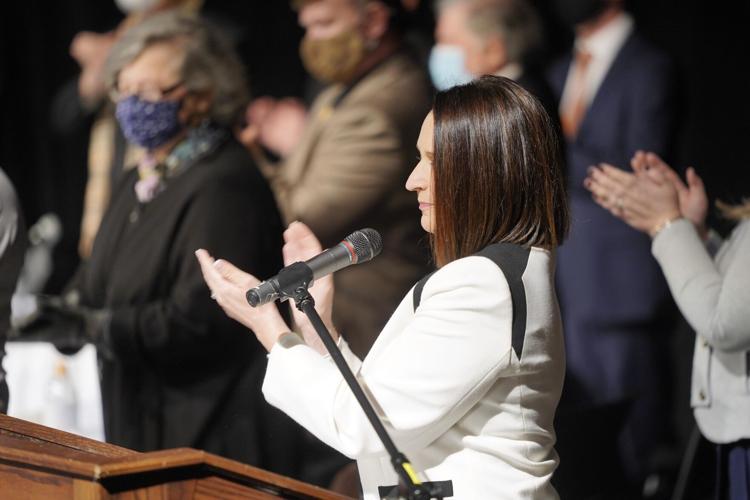 Pittsfield Mayor Linda Tyer delivers her State of the City address on Monday at Berkshire Community College's Boland Theater. During the course of the speech, Tyer asked the audience to stand and applaud the city's frontline workers for their ongoing efforts during the pandemic.

PITTSFIELD — Mayor Linda Tyer said that the city is poised to take advantage of the “promise and possibility” of 2022 even as the coronavirus pandemic nears the two-year mark and continues to upend city life and business.

Key to the promise of 2022 are a spate of long-developing economic and infrastructure projects, including a the construction of $10 million Holiday Inn on South Street, the city’s first batch of American Rescue Plan-funded projects and work on city schools.

“The trials and tribulations of COVD-19 have made us stronger than ever,” Tyer said. “Pittsfield has a renewed fighting spirit that is shaped by strong partnerships, willing collaborations, teamwork and sheer determination.” 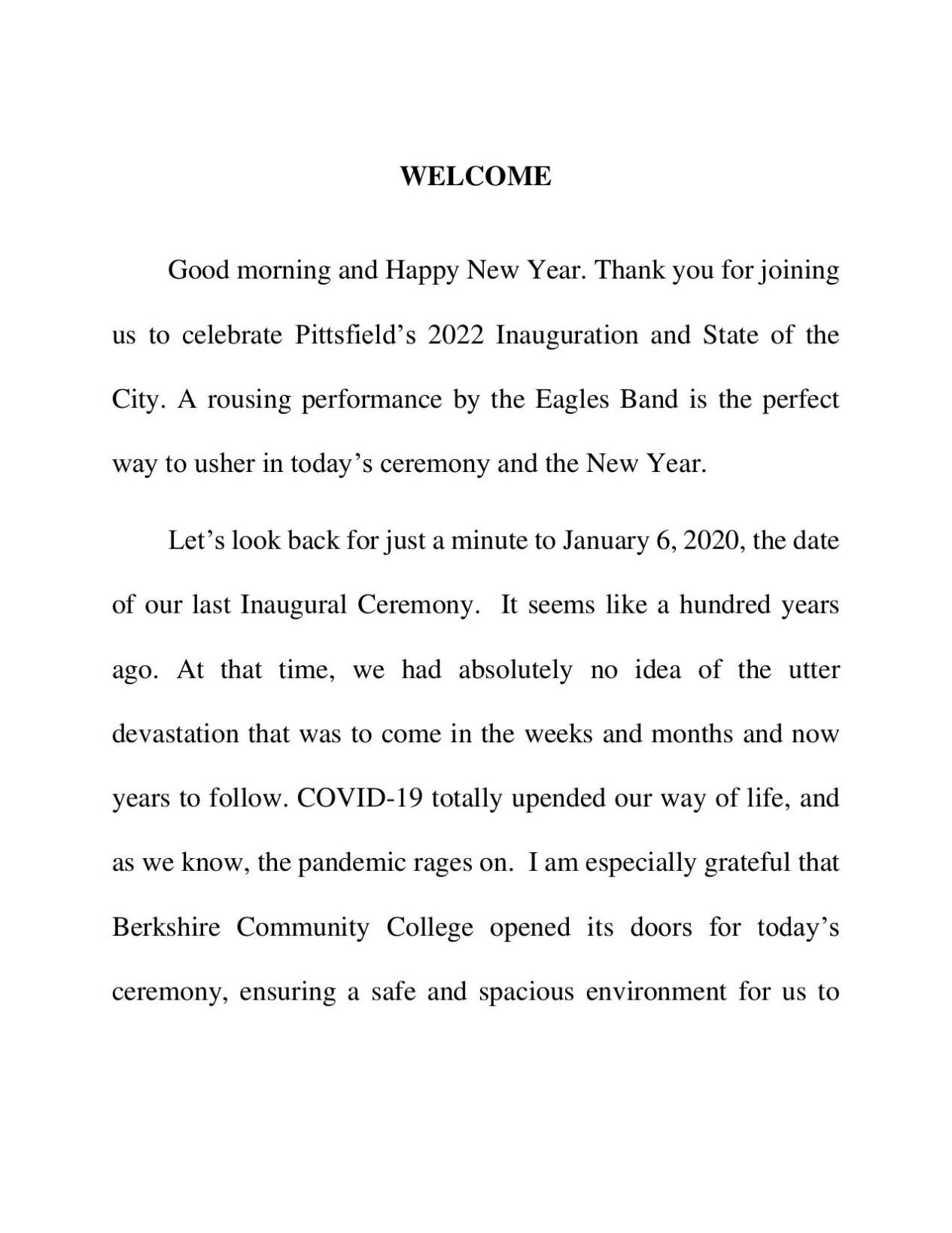 The mayor delivered her annual State of the City address Monday morning to a crowd of residents, city department heads and the newly sworn-in members of the City Council and School Committee at an event at Berkshire Community College’s Boland Theater.

Reflecting on the last year, the mayor said the devastation and uncertainty of the pandemic was mixed with the blessing of nearly $41 million in federal coronavirus relief money and the strengthening of relationships with regional and state representatives.

Here are some of the key themes the mayor touched on in her State of the City address:

The construction of a $10 million, 77-room Holiday Inn Express will begin this year, according to the mayor. The project, set for the former site of the Comfort Inn at 1055 South St., was conceptualized in 2014 and proposed to the City Council in 2020. Construction was supposed to begin this year but was delayed by the pandemic.

The Holiday Inn Express is being developed by Somnath LLC, a venture of Mauer and Dilip Desai whose families own the Best Western Plus on West Street.

The announcement that the city has reached an agreement to buy the former Hess Station on Tyler Street and will demolition the old building and return the lot to green space was met by applause from the audience at the address.

The mayor said the city will also begin site improvements on Site 9, the 16-acre space in William Stanley Business Park. The improvements are being covered by an $880,000 Mass Development Site Readiness grant the city received in March.

Tyer said that looking back on the last inauguration event in 2020, “we had no idea of the utter devastation and hardship that was come in the weeks and months, and sadly now years to come.”

The mayor highlighted the continued “extraordinary teamwork” of the Berkshire Vaccine Collaborative, the countywide project which has vaccinated thousands of residents over the last year and has plans for more vaccine clinics in the coming weeks.

Tyer added that along with the continued push to vaccinate residents, the city has begun distributing a batch of 11,000 at-home coronavirus test kits from the state. The Pittsfield Health Department has distributed 5,000 kits provided to 17 community organizations like Berkshire Habitat for Humanity and the Berkshire Athenaeum. The organizations are distributing the free kits to residents.

Tyer reviewed the projects she’s selected as the first recipients of some of the nearly $41 million in American Rescue Plan Act money given to Pittsfield.

The mayor said the city will fund a portion of the YMCA renovation that will help expand the facility’s child care program, a major renovation of the Ashley Reservoir that is a key part of the city’s drinking water infrastructure, air quality improvements to the Pittsfield fire stations, upgrades to the sidewalks in the Morningside and West Side neighborhoods and close the funding gap for the Fenn Street homeless shelter planned for the First United Methodist Church.

Also on the list of allocations is an additional $1 million to continue the At Home in Pittsfield program — a program Tyer called a “signature initiative” of her administration. The housing program provides grants to residents who wouldn’t typically qualify for financing for exterior repairs and was originally given $500,000 from the Economic Development Fund.

In the 2021 State of the City address, Tyer said that creating a “new police station which will serve the needs of a modern law enforcement agency” was her “top priority for public safety.”

In this year’s address, Tyer said progress to that goal has been “been slow and somewhat painful” but that she remains committed to “building a new police station” as well as a training tower for the Pittsfield Fire Department.

“We know for sure is that the current police station has long outlived its usefulness and with each passing day that facility becomes more and more deteriorated and unsafe,” Tyer said.

The mayor said that fast-growing mold has sprung up in the building, damaging equipment and supplies following recent flooding.

The mayor said that as the pandemic continues through a third school year, her and the School Committee’s “No. 1 priority is to do all that we can to keep our schools open so that our students are engaged in learning, enjoying extracurricular activities, and strengthening their social emotional well-being.”

Students and staff returned to work at Pittsfield Public Schools on Monday after coronavirus cases shot up over the holiday break. District officials distributed hundreds of tests to district employees over the weekend to allow staff to test themselves before returning to the schools.

As of Monday afternoon, the district reported 95 active coronavirus cases within the school community — 55 student cases and 40 staff cases. The case count Monday was almost double the 47 cases reported Sunday.

Tyer said that in the next year the city will use local ARPA money to build a new heating and ventilation system at Pittsfield High School and Reid Middle School. That project follows the announcement that a master planning project with a focus on Crosby, Conte and Morningside elementary schools has been earmarked to receive $200,000 from the state’s ARPA money.

The mayor said along with the work to come on school buildings this year, she and Superintendent Joseph Curtis will work together to hire the first city and schools chief diversity officers following the creation of the positions last year.

The 11-member Pittsfield City Council, six-member School Committee and city clerk swore to uphold their duties to the residents of the city before a gathering of family, friends, city department heads and local politicians.

In virtual State of the City address, Tyer envisions a thriving post-pandemic landscape

PITTSFIELD — The pandemic rewrote priorities and still looms over municipal affairs, but Mayor Linda Tyer on Monday said her agenda sets up th…

'Pittsfield,' of course. Check out the other go-to words in Mayor Linda Tyer's big speech

At look at the 100 words that Pittsfield Mayor Linda Tyer used most often in her State of the City Address on Monday.

Property owners say that though construction and financing of the project has been delayed during the pandemic, they believe they can break ground this spring and open the new hotel by May 2023.