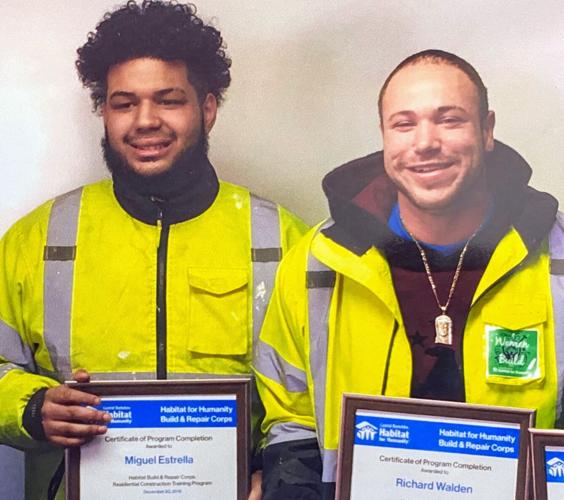 Miguel Angel Estrella, left, and fellow trainee Richard Walden show off their certificates after completing a program run by Central Berkshire Habitat for Humanity in Pittsfield. A march and rally for Estrella, who was shot and killed by Pittsfield police, begins at 4 p.m. Sunday in downtown Pittsfield. 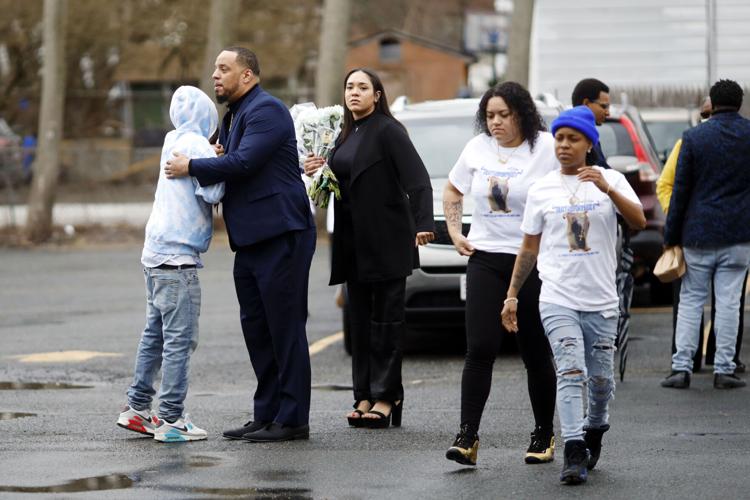 On April 1, mourners gathered in groups to grieve after attending calling hours for Miguel Estrella at the Devanny-Condron Funeral Home in Pittsfield. Estrella died March 25 when he was shot by a Pittsfield police officer.

PITTSFIELD — This afternoon, Elina Estrella and her mother, Marisol Estrella, will join a march past Pittsfield’s centers of power with a message: No one else suffering a mental crisis should die at the hands of the police.

Late on March 25, their brother and son, Miguel Estrella, 22, was shot and killed by a police officer responding to an emergency call.

Ahead of today’s 4 p.m. march and rally downtown, Elina Estrella said that losing her brother has been “my family’s worst nightmare.”

“People have made a lot of assumptions about that night, and I only wish they had had the chance to know Miguel,” Estrella told The Eagle in a prepared statement, when asked to share thoughts about her brother’s loss.

“Miguel experienced emotional and mental health issues, just as a lot of us do. But the fact is that the police, the first responders who were called to help him that night, killed him,” she said. “Miguel isn’t the first person in Pittsfield killed by police during a mental health crisis, but my mother and I are determined to see that he is the last.”

The shooting is under investigation by the Berkshire District Attorney’s Office and the Berkshire State Police Detective Unit. Authorities say Estrella, who held a knife and had been cutting himself, advanced on police when they arrived in a second response to the building at 279 Onota St. where Estrella lived. Attempts to deploy Tasers to disable him failed, police say.

In her statement, provided one week after her brother’s April 2 funeral, Elina Estrella said her family is determined to press for changes in how people in mental health crisis are treated in emergency calls.

“It’s so difficult for us to mourn this tragedy, to try to put our lives back together, and to still have the strength to fight for justice for Miguel,” she said. “But we’re doing it, and we’re going to keep fighting, so that no other families in our community have to go through this.”

“Miguel was the light and life of our family and to all who knew and loved him,” Elina Estrella said. “He was caring, ambitious, and a natural leader. He had a magnetic personality — you just wanted to be around him.”

Friends say Estrella had struggled with depression and had engaged before in self-cutting.

Estrella’s mother told allies in a gathering this week she feels a call to action.

“I am not only Miguel's mom, I am an activist. Enough already of being silenced,” she said, according to a statement provided by the groups Manos Unidas and Roots & Dreams and Mustard Seeds.

Last week, the march organizers called on the city to improve how it responds to people in mental health crises, in part by shifting resources from the Pittsfield Police Department. They are asking the city's mayor to direct funding to human services to enhance “mental health support, youth jobs and mentorship programs, community-based violence prevention, affordable housing, and economic justice programs like a universal basic income for low-income residents.”

Pittsfield plans to close sections of the march route today, according the mayor’s office. At 2:45 p.m. the intersection of Onota Street and Woodbine Avenue and Warriner and View streets will be closed to through traffic. From 3 to 6 p.m., sections of Onota Street, Columbus Avenue, North Street, and the area around Park Square will be temporarily closed.

People who want to attend the march and rally are asked to meet at the southwest corner of Columbus Avenue and North Street. The group plans to proceed south on North Street and go to City Hall and the Police Department. It will then swing by the outside of the district attorney’s office at North and West streets before ending at Park Square, where Miguel Estrella’s family and community members will speak.

The National Alliance on Mental Illness Berkshire County is fundraising to resume a crisis intervention training program for law enforcement following the death of Miquel Estrella, who was shot by a Pittsfield police officer.