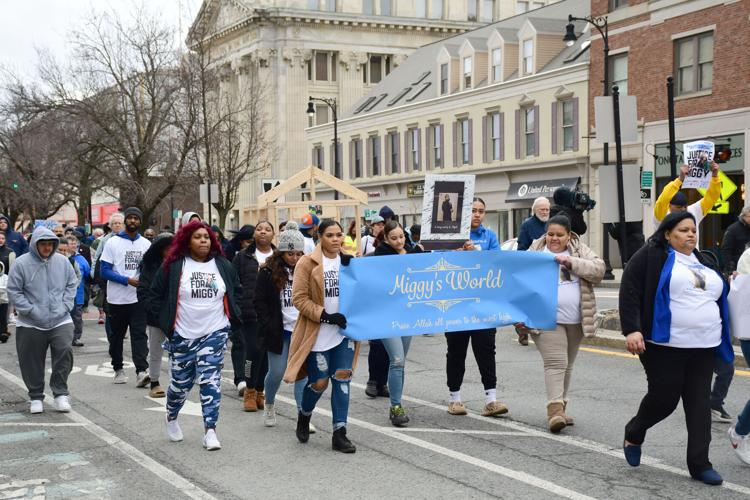 Friends, family and supporters march down North Street in Pittsfield in April, two weeks after Miguel Estrella was shot and killed by city police. 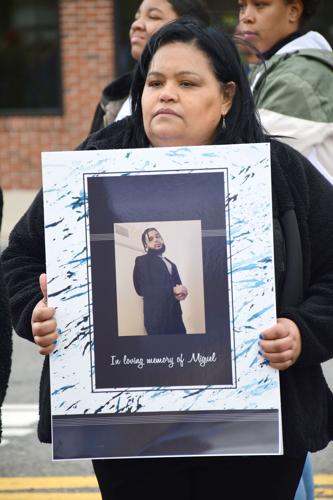 PITTSFIELD — A march on the six-month anniversary of Miguel Estrella’s death will press for reform in his name, including a wholesale change in how Pittsfield responds to people in mental health crisis.

That change: Not involving the Pittsfield Police Department.

A group, Change for Miguel, plans to walk Sunday to Park Square in Pittsfield for a rally at which participants will “bear witness to his memory” and lay out demands that city officials listen to city residents who feel “over-policed,” according to a spokeswoman.

Estrella was shot and killed March 25 by a Pittsfield police officer, Nicholas Sondrini, outside Estrella’s apartment building on Onota Street.

The shooting followed 911 calls on a Friday night when Estrella had threatened to hurt himself and after officers were unable to successfully deploy less-than-lethal means of stopping Estrella, who approached police with a knife.

Sunday’s march and rally starts at noon at Persip Square at the corner of Columbus Avenue and North Street. It follows a similar route of an event April 10, when people marched wearing “Justice for Miggy” T-shirts.

Dana Rasso, a spokeswoman for Change for Miguel, said in a statement that while the officers involved in the fatal shooting were found by the Berkshire District Attorney’s Office to have acted in self-defense, “we know the truth in our hearts.”

“This was a young man experiencing a mental crisis, and instead of getting assistance from an unarmed mental-health professional who is trained in de-escalation, he met his death at the hands of the police,” the statement said. “This tells us that the solution to tragedies such as this is not a co-responder model.”

For several years, Pittsfield police have been able to summon a crisis clinician to join in a response to certain types of calls. On the night of Estrella’s shooting, a clinician had just gone off duty.

The group holding Sunday’s rally wants Pittsfield to adopt a wholly different system, one available around the clock in which a “peer-led” team, not police, handle the emergency.

“The police, by virtue of their training, saw him as a threat that had to be neutralized,” the group’s statement said. “Miguel, by virtue of his previous interactions with police, saw two men in uniform who were armed to the teeth.”

The group says it now pursues four demands in the aftermath of Estrella’s death.

– That the city embrace a type of mental health crisis response that is “fully separate from the local police department.

– That local elected officials pledge to bring change in how the city handles mental health crises, guided by what they learn from a future presentation “in which members of over-policed communities express what those most affected feel creates a safer environment.”

– That the city provide “real, concrete, ongoing allocations” of money, not only for mental health support, but for “youth jobs and mentorship programs, community-based violence prevention, affordable housing, and economic justice programs like a universal basic income for low-income residents.”

– That the city no longer deploy “resource officers” to schools. The group terms those positions “in no way a supportive force in public school education.”