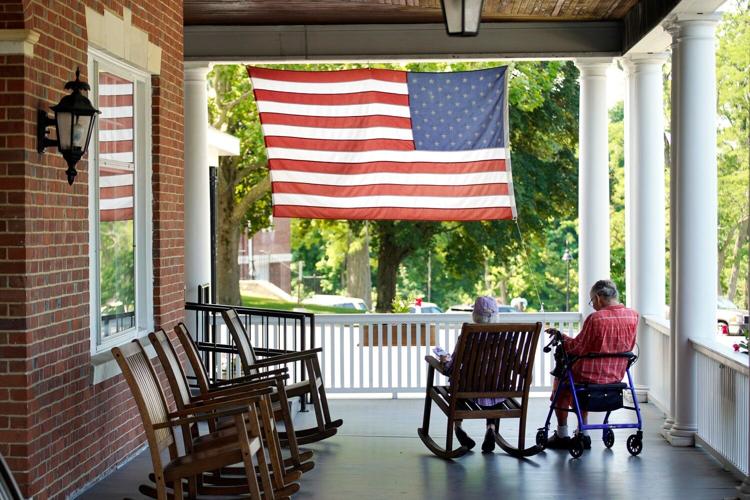 Two women sit ion the porch of the Curtis in Lenox. The facility, home to elderly and handicapped tenants, is being considered as the site of a wireless antenna to improve cell service in town. Residents are expressing concerns about possible health risks of living under the devices, which would be mounted at roof level. 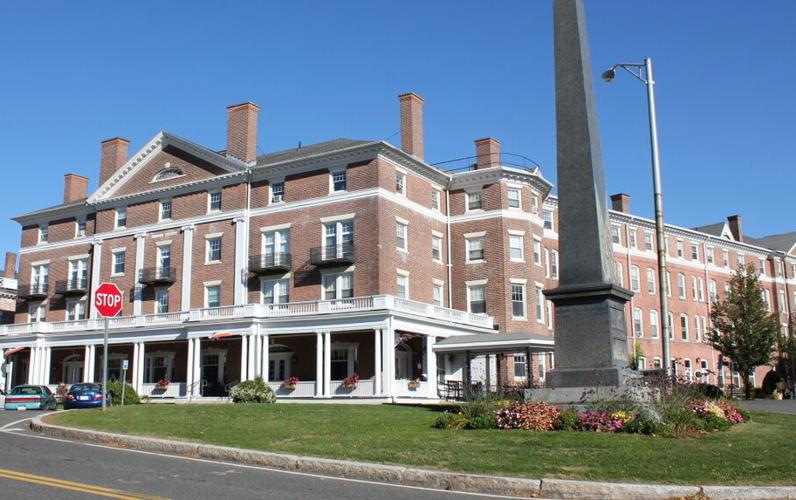 The town of Lenox again is considering placing telecommunications devices atop the Curtis, a residential center for elderly and disabled residents. Though officials cite gaps in cell service, residents are concerned about possible health impacts.

LENOX — A proposal to locate a low-power cell antenna atop the state-subsidized Curtis housing complex is encountering high-voltage pushback from tenants and other residents concerned about claims of health impacts from wireless installations.

At Tuesday’s monthly Lenox Housing Authority board meeting, Vice Chairwoman Kim Graham said no decisions were imminent on a lease application from the potential provider, Evolution Site Services of Pittsfield. The company is a regional developer of wireless communications facilities led by Christopher Ciolfi, who attended the meeting.

“I am going forward with this feeling confident, but sometimes the responsibilities of this board are not always going to be in agreement with the residents.”

— Kim Graham, vice chairwoman of the Lenox Housing Authority board, on the placing of a cellular telephone antenna on the Curtis

Ciolfi said he was approached by Verizon Wireless and was awarded the project by the Housing Authority, which reports to the state’s Executive Office of Housing and Economic Development, and by the town. Negotiations over a lease are incomplete as of this week, and needed town approvals also lie ahead.

Meantime, the town’s Planning Board continues to explore revisions in the bylaw governing telecommunications facilities.

Graham told nearly 50 residents attending Tuesday’s meeting that the decision on placing the devices will be made by the town. After future informational forums and formal public hearings, the Lenox Zoning Board of Appeals will rule on a special permit for Ciolfi’s proposed lease agreement.

It’s the third time in 15 years that a wireless installation has been discussed for the historic building, which was constructed in 1829 as a hotel and operated by the Curtis family since 1853. Under new ownership, it folded in 1976 and was purchased by the town in 1979 for subsidized housing.

Both of the previous wireless proposals, in 2002 and 2017, were shelved. The current application has been under discussion since spring 2020, after a 2019 town forum on wireless coverage gaps.

Trilby Miller, a registered nurse who lives at the Curtis, voiced concern about the health impact of wireless technology on babies and children.

“It seems their developing brains are more susceptible to EMFs [electromagnetic fields] than are adult brains,” she said.

She acknowledged “ongoing debate” about the effects on health from digital devices.

“But I don’t think there’s any doubt that cell towers and antennas emit more concentrated frequencies of EMF radiation than digital devices and routers,” Miller said. “I find there’s strong opposition to having a cell antenna or, eventually, multiple antennas on the roof of the Curtis.”

She cited petitions circulated among more than 80 residents who are opposed to the installation.

“Also, there are petitions circulating in the town for owners and concerned citizens who do not want a cell antenna on the historic Curtis Hotel in the heart of our town,” she said.

Miller asked Lenox Housing Authority board members if they have “any concern or responsibility to consider the health and welfare of your tenants.”

“I find there’s strong opposition to having a cell antenna or, eventually, multiple antennas on the roof of the Curtis.”

— Trilby Miller, a registered nurse who lives at the Curtis

Graham, the board vice chairman, acknowledged her concern as an individual.

“I have done a lot of research, so, my responsibility to all of you is great,” she said. “I am going forward with this feeling confident, but sometimes the responsibilities of this board are not always going to be in agreement with the residents.”

Several residents pushed back against the confidence, including Carol Ramsey, the tenants’ representative on the Housing Authority board who cited her own health sensitivities to computers.

Another tenant, discussing medical impacts, told the board that “some people are very sensitive, but others aren’t. Your research showed you it was safe, but my research showed me it was not safe.”

Graham said she believes the project would not be harmful.

“I feel I’m moving forth in a safe manner, speaking for myself,” she said. “We can agree to disagree.”

The Lenox Planning Board is at work on a bylaw proposal to regulate wireless communications facilities.

Also supporting the antenna were board Chairwoman Diana Kirby, who pointed to her belief that technology “has come a long way in 20 years,” and member Deborah Prew, who said that she felt “very comfortable” with the antenna.

Housing Authority Executive Director Barbara Heaphy also backs the project. The Curtis is the proposed location, she said, because it is the highest point in the area.

“This is where cell service is a health and safety issue, including for ambulance and police,” she said. “I felt that was pretty important. I have not seen much that proves this is a real danger to anyone’s health.”

Any frequency radiation from a cell antenna points upward, she noted. “It would not come down.”

Anthony Lepore, consultant to the town and the Housing Authority board, said the town will decide. Lepore is vice president and director of regulatory affairs for CityScape Consultants, a company he founded in 1995 that represents local governments on wireless technology issues. The firm is not affiliated with any tower owner or service provider.

He cited engineering studies showing that a vehicle’s electronic key fob “produces more radio frequency exposure to people in close proximity than antennas on the roof would do.”

Lepore said he believes residents of the Curtis, including elderly and handicapped tenants, are not at risk. “According to the laws of physics, radio frequencies do not go down.”

“My biggest concern is advocacy for the town and public health in general,” he said. “Your voice is very powerful, and you need to take advantage of it.

Can’t get a cell signal in Lenox? Town planners aim to bring a wireless policy bylaw to voters next month

Despite signs of heightened opposition, efforts continue to submit a zoning plan for a decision at a Nov. 17 special town meeting.

Sheffield wants to ban 5G wireless until health questions are resolved. Will the town be able to stop it?

Sheffield residents filed a petition with the town last week to halt 5G until federal regulators can prove that higher radio frequency radiation is nothing to worry about.