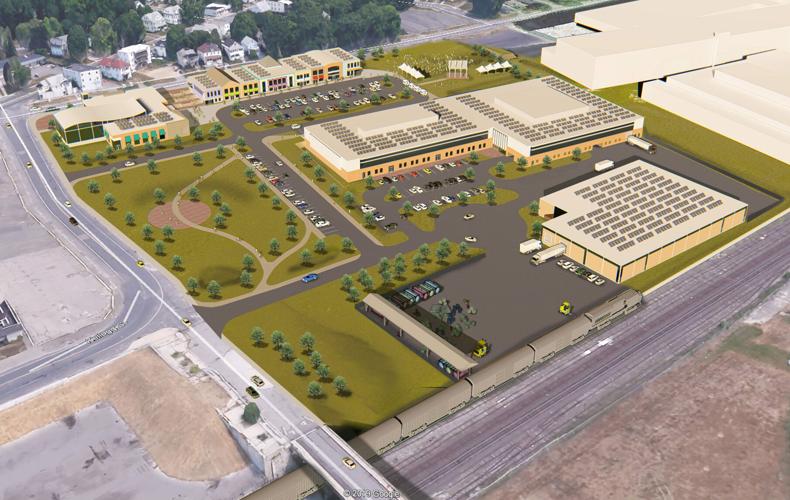 Above: An artist’s rendering shows the vision for a redeveloped Site 9 parcel at the William Stanley Business Park in Pittsfield. The 16.5-acre site would include a mix of buildings, green space and a roadway. Inset: Site 9 in its current state is seen from the Woodlawn Avenue bridge. The former General Electric buildings on the site were demolished in 2009 and 2010. 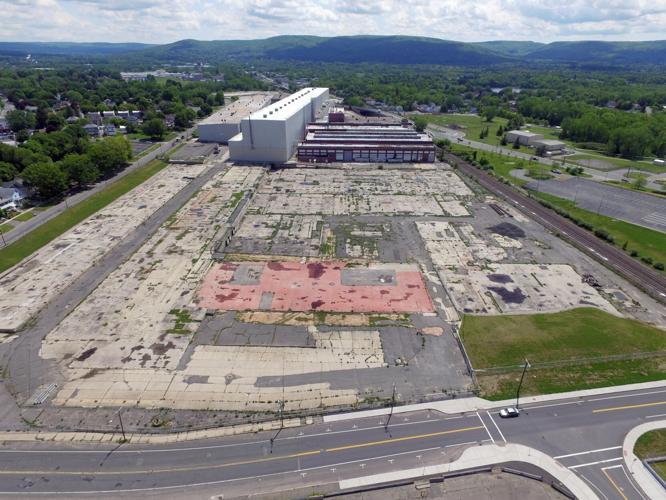 This view of the William Stanley Business Park shows Woodlawn Avenue in the foreground and Building 100 in the background. Pittsfield has received $1.1 million in state money to remediate and redevelop the largest of the park’s nine building sites. 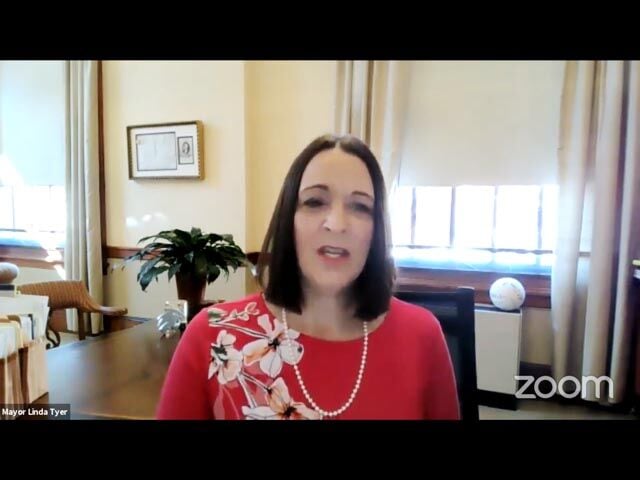 During a virtual news conference Tuesday, Pittsfield Mayor Linda Tyer expressed her gratitude for the assistance with the William Stanley Business Park, noting the work that the Baker-Polito administration has done on other city projects. 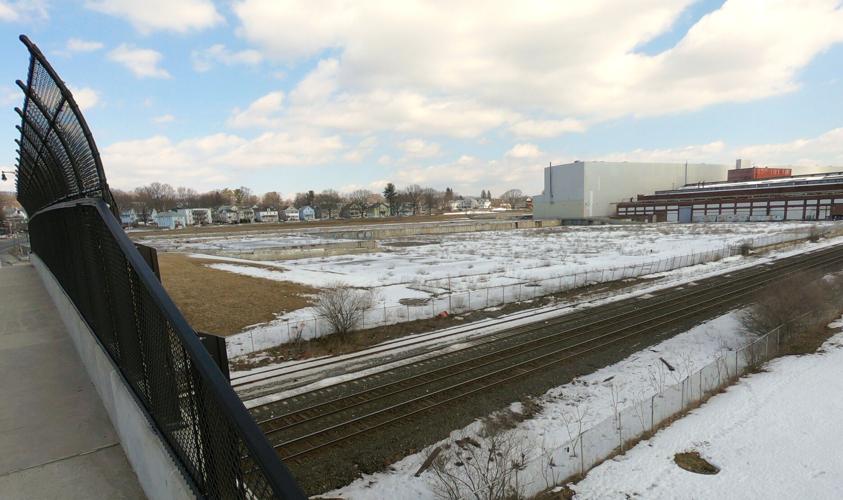 Site 9 at the William Stanley Business Park is seen from the Woodlawn Avenue bridge. The former GE buildings on the site were demolished in 2009 and 2010.

Above: An artist’s rendering shows the vision for a redeveloped Site 9 parcel at the William Stanley Business Park in Pittsfield. The 16.5-acre site would include a mix of buildings, green space and a roadway. Inset: Site 9 in its current state is seen from the Woodlawn Avenue bridge. The former General Electric buildings on the site were demolished in 2009 and 2010.

Site 9 at the William Stanley Business Park is seen from the Woodlawn Avenue bridge. The former GE buildings on the site were demolished in 2009 and 2010.

PITTSFIELD — The city of Pittsfield has received $1.1 million in state money to begin developing the largest of the William Stanley Business Park’s nine building sites.

The money from two separate state programs will pay for preparing building Site 9 for construction. The 16.5-acre tract borders on Tyler Street and Woodlawn Avenue at the northern end of the 52-acre business park.

The park, home to General Electric’s former power transformer facility, is contaminated with polychlorinated biphenyls, or PCBs, which are probable carcinogens. It often is referred to as the teens parcel in a reference to the numbering of the GE buildings there.

The city received $880,000 from the Site Readiness Program, which is administered by MassDevelopment, and $264,000 from the state’s Brownfields Redevelopment Fund.

During a virtual news conference held by the state Tuesday morning, Mayor Linda Tyer expressed her gratitude for the assistance, noting the work that the Baker-Polito administration has done on other city projects.

The city of Pittsfield and the Pittsfield Economic Development Authority, the quasi-public agency responsible for the business park’s development, completed a master plan last year for developing building Site 9.

“The granting of this award is an example of the collaborative spirit that exists in the city of Pittsfield,” Tyer said.

“The partnership between the city of Pittsfield and [PEDA] reflects a tremendous effort to keep the development of the William Stanley Business Park a priority.”

About half of the money from the Site Readiness Program will pay for permitting, engineering and design plans, said Mark Arigoni, the manager of landscape architecture at SLR Consulting in Connecticut who has conducted work on the site. A site plan for building Site 9 was developed last year.

The remainder of the money will pay for the cracking and crushing of a jumble of uneven concrete foundation slabs that were left at the site when GE turned over the parcel to the Pittsfield Economic Development Authority in February 2012, after the buildings were razed.

Instead of removing the slabs from the property, plans call for them either to be cracked or crushed, then topped with 4 feet of dirt, upon which developers then would build, city officials said at a news conference Tuesday.

The slabs currently make the site “look like the surface of the moon,” Tyer said Tuesday.

The money from the Brownfields Redevelopment Fund will be used to complement the other work, the mayor said.

The city is planning to subdivide the 16.5-acre lot into smaller parcels to “give prospective developers more choices,” Tyer said. A drawing of the completed site that was presented at a news conference held by city officials Tuesday showed the completed site having green space and areas for development that would be accessed by a new roadway.

The cracking of the concrete slabs will take place in areas where green space is planned to be located, while the crushing will be in areas that are scheduled for development.

“It would be one less thing that a developer would have to do,” Arigoni said.

Construction at the site could start as soon as this summer, or possibly by the end of 2021, but more likely is to begin next year, pending the completion of permitting, engineering and design work, he said.

Arigoni said the city and PEDA “will not stop” seeking additional money to pay for all the work that will need to be done at the site.

“The intent right now is that we feel pretty comfortable that we’ll be able to prep the existing site,” he said. “We’ll be able to crack where we need to crack, and crush where we have to install utilities.”

Development has been proposed at building Site 9 before. From 2011 to 2016, a Boston-area company tried unsuccessfully three times to develop the site.

The final proposal, a 190,000-square-foot Walmart Supercenter, was presented as the anchor for a $30 million project known as Woodlawn Crossing, a mixed-use development that was to have featured medical offices, life sciences, retail, light manufacturing, and research and development in areas near the city’s Morningside neighborhood, which is one of Pittsfield’s poorest areas.

Many city residents were opposed to the projects, and the developer pulled out in 2017.

The city has continued to work on plans to revitalize Morningside, where the business park is situated. Two private investors are developing residential housing projects on nearby Tyler Street. Also, the city is planning to place a “roundabout” to slow traffic at the five-way intersection of Dalton Avenue, Tyler Street and Woodlawn Avenue, which is located just outside Site 9, City Planner C.J. Hoss said.

The William Stanley Business Park was one of 10 projects from across the state that received fiscal 2021 money from the Site Readiness Program, state officials announced Tuesday. The $880,000 that the city received was the largest amount awarded.

During the state’s news conference, Lt. Gov. Karyn Polito said the idea behind the Site Readiness Program is to help state municipalities grow.

“Being ready for that opportunity is really critical,” she said. “Time is money.”