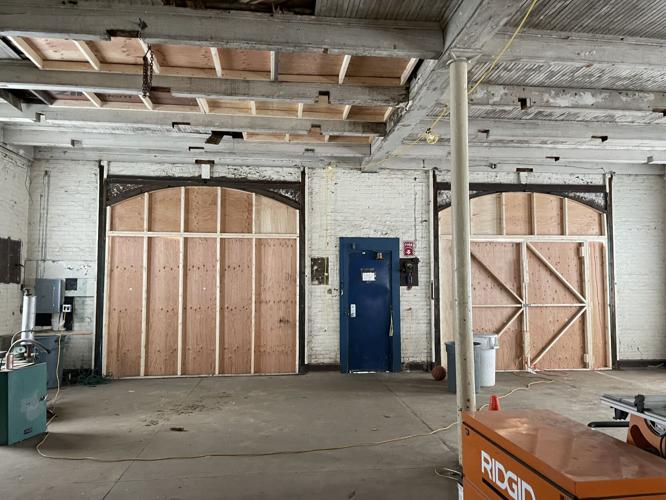 Early in the project, crews took the old firehouse interior down to the basics. 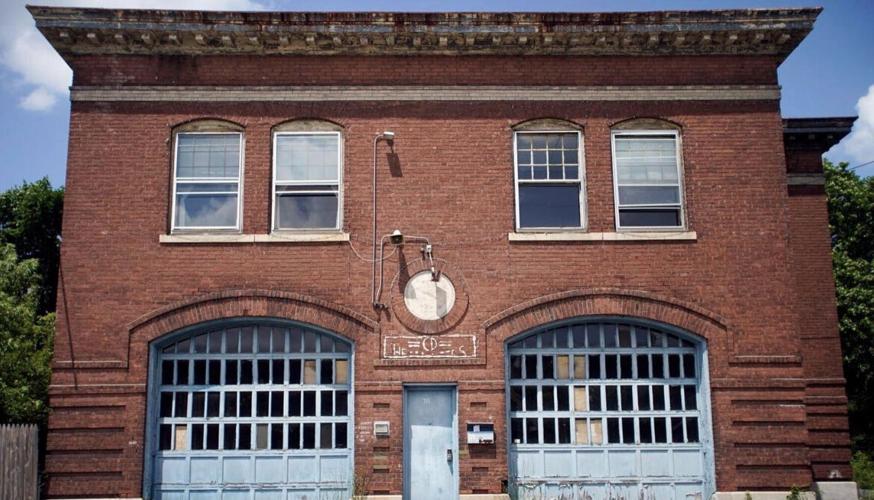 A results of a project to transform this former fire station on Tyler Street in Pittsfield will be revealed this week. 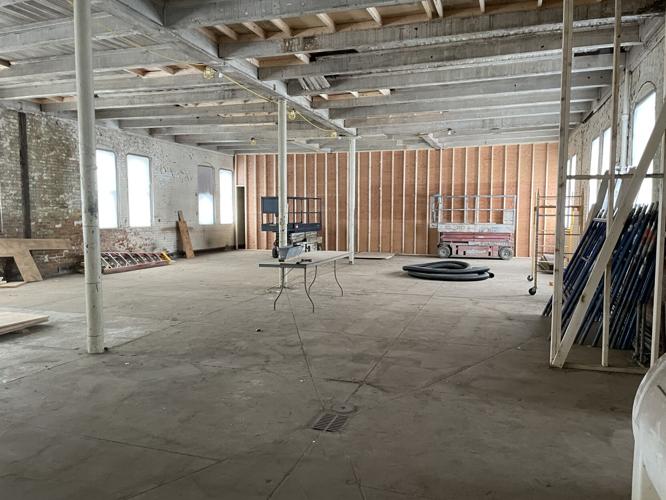 A view of future living spaces earlier in the transformation of the former Pittsfield firehouse. 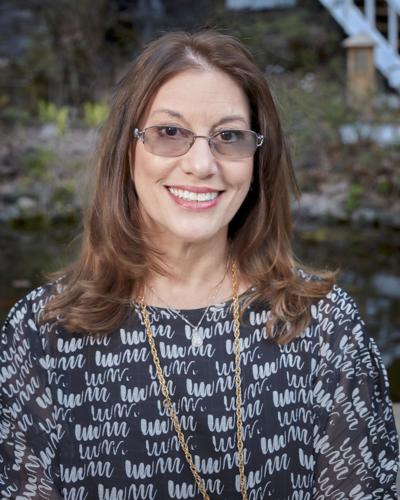 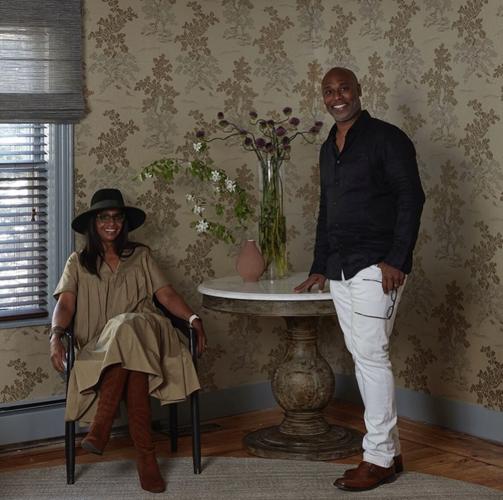 Lisa Walker Brown and Everick Brown, of Everick Brown Design, led one of the projects to create new living space inside the Pittsfield fire house. 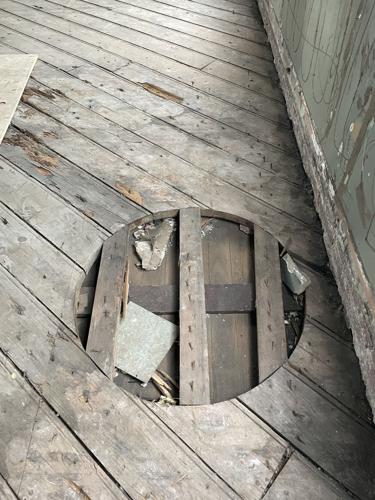 This cut out area in the floor had been used by firefighters to slide down a pole. 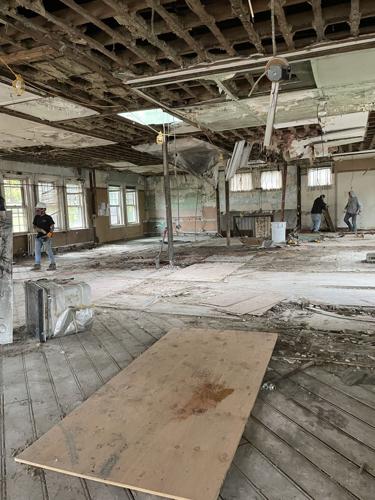 Crews continue work to gut the old firehouse space, early in the project.

A results of a project to transform this former fire station on Tyler Street in Pittsfield will be revealed this week.

Crews continue work to gut the old firehouse space, early in the project.

If you’ve ever driven east on Tyler Street from downtown Pittsfield, chances are you’ve noticed the former Morningside Firehouse.

Built in 1906 by Pittsfield architect Joseph McArthur Vance, the building, at 231 Tyler St., is a notable presence within the urban fabric of Morningside neighborhood: It stands out from its neighbors on account of its intricate brickwork, architectural details and compact-but-formidable facade.

For years, its steel-blue doors have been boarded up. Due to extensive roof and water damage, the building had become derelict, left to slowly slip out of memory as the beautifully functional firehouse it was once.

Now, a partnership between local developer David Carver of CT Management and The Kaleidoscope Project (TKP), a West Stockbridge-based nonprofit dedicated to providing opportunities to designers and artists of color, has given rise to a new future for the Morningside Firehouse.

The firehouse will enter the next phase of its nearly 120-year life renovated and reconfigured into four market-rate, two-bedroom apartment units.

These apartment spaces — each designed by a different BIPOC (Black, Indigenous, and people of color) design team — will be revealed in a ticketed event Friday in The Kaleidoscope Project’s second annual designer showhouse.

The Morningside Firehouse project began with a dream, and a vote of confidence from the City of Pittsfield. For nearly two years, Carver drove past the firehouse on his way to work on a now-completed adaptive reuse project at St. Mary’s Church. “Every day, I saw this poor little building, sitting there, owned by the city, but completely neglected,” Carver told me.

Where other people saw an eye sore, however, Carver saw an opportunity, a chance to demonstrate to the city of Pittsfield the remarkable potential of breathing new purpose into old structures.

“We wanted to inspire people to think about how to renovate buildings so that they are better built and better looking,” Carver said.

A final project cost was not made available by CT Management, but The Eagle reported in July 2021 that the renovation investment was $1.25 million.

Carver said controlling development costs was a challenge because of inflation and supply-chain issues.

“In the case of the firehouse, even though it was structurally sound, the interior condition was poor, requiring extensive demolition,” he said.

The project received a 10-year incremental tax exemption, approved in September 2021 by Pittsfield City Council’s subcommittee on Community and Economic Development. This reduction in property taxes amounts to a $55,000 savings for the developer over the course of a decade, one factor that will make it possible for the apartments to be offered for rent at market rate despite the up-front cost of the rehabilitation of the building.

Although restoration projects like this are generally not less expensive than new construction projects, to Carver they are critical to preserving the architectural history of the city.

“Buildings today aren’t built like they used to be,” he said. “We have all of these remarkable buildings that can be transformed into something completely new and add tremendous value to Pittsfield. But we need to focus on quality, not quantity.”

In May, after Carver and his team finished their interior demolition to prepare for the buildout within, Carver connected with designer and TKP founder Amy Lynn Schwartzbard, herself no stranger to the Berkshires. Last year, Schwartzbard brought TKP to Lenox for its first designer showhouse, where 22 BIPOC designers were invited to renovate and modernize the historic Cornell Inn.

In the wake of their success in Lenox, Schwartzbard was on the lookout for another sustainable renovation opportunity to serve as the jumping-off point for this year’s designer showhouse. Carver’s restoration of the Morningside Firehouse was a chance to bring BIPOC designers into Pittsfield, amplifying the work of underrepresented designers while enriching the city’s built environment.

From the beginning of their collaboration, Schwartzbard and Carver made a good team. “Amy is full of energy,” Carver said. “We’re interested in the same kinds of ideas. We talked about some of the mutual interests we have, and she explained the incredible opportunity she saw in the Firehouse.”

This year’s showhouse, born from the merger of their visions, gave four design teams complete discretion to imagine and create the interior spaces of the four newly converted apartments. With a focus on sustainability, the designers created welcoming and dynamic interiors that reflect their individual narratives and approaches.

To learn more about the restoration and the design work that will be on view in the upcoming showhouse, I spoke with Everick Brown, one of the four Firehouse project designers, who along with his wife, Lisa Walker Brown, own an interior design firm in Westchester, N.Y.

The duo had connected with Schwartzbard and The Kaleidoscope Project when they were invited to participate in the Cornell Inn Showhouse project. Together, the Browns reimagined the inn’s lounge space, combining elements of vernacular Northeastern design with Japanese minimalism, and employing a rich but restrained palette of textures and colors.

Everick Brown describes his style as “modern classic with a global perspective.” He spent formative years of his professional life traveling, collecting artifacts and inspiration from around the globe. During these adventures, he developed what he calls a “multilingual” methodology for interior design, in which questions of materiality, color, light and place are deeply intertwined.

In his design for this year’s Firehouse Showhouse, Everick Brown tuned in to the marriage of nature and culture that makes this region special: He strove to translate the most arresting natural elements of the Berkshires into the Firehouse’s interior space.

One way Brown accomplished this was by taking traditionally outdoor furnishings — such as garden and patio furniture — and creating purpose for them inside the firehouse. This indoor/outdoor theme is echoed in his color palette, which negotiates the different surfaces and textures of the apartment with a scheme of tan (which represents land); blue (to represent water); and white (to represent freedom).

Brown embraced the way that, despite its transformation, many of the firehouse’s architectural details remained resonant and relevant inside.

“What I love to do when we’re working on a renovation like this is to be inspired by what was. Because it's an old firehouse, the first thing that came to mind was using the high ceilings to create spaces that are open and welcoming.”

Leaning into these spatial realities, Brown told me, is part of what made this project engaging. “The most exciting thing is to show people that they can live in old houses in a contemporary way. When you walk into this old firehouse, expecting something really old, you’ll be surprised by how vibrant and comfortable the interiors have become.” 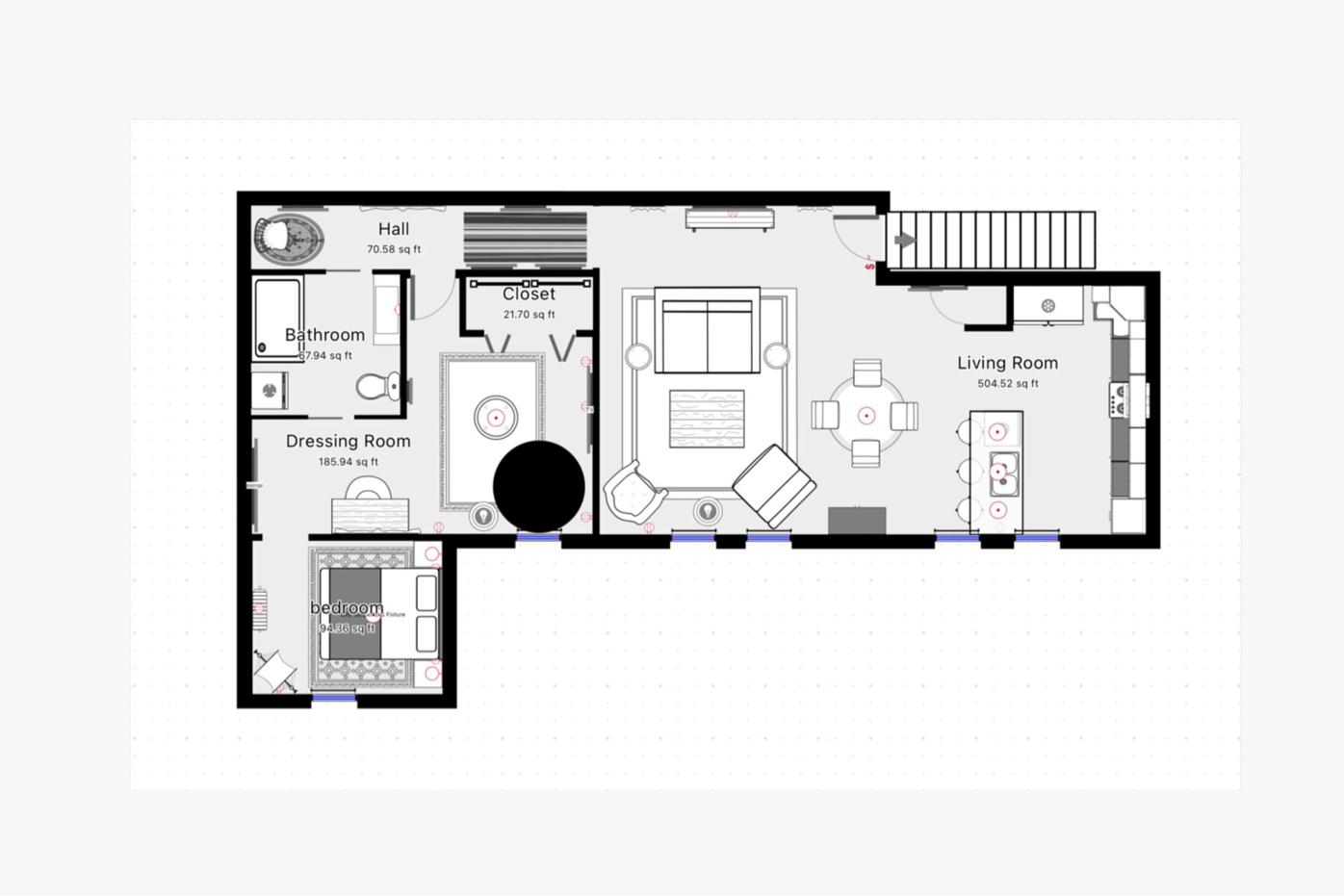 By creating a spotlight to promote the work of underrepresented voices in the design community, The Kaleidoscope Project is inspiring a new generation of designers and artists with every showhouse project they undertake.

Though the firehouse restoration is a relatively small undertaking, compared to construction of a multifamily housing complex, Carver and Brown believe that The Kaleidoscope Project’s Firehouse Showhouse will energize people to care more about the revitalization of Pittsfield, and the Berkshires.

“I hope [The Kaleidoscope Project] continues to engage other properties around town,” said Carver.

“This is our opportunity to inspire people to want to live in the Berkshires,” said Brown.

The Kaleidoscope Project reveal will take place at an opening celebration Friday. The Firehouse Showhouse will remain open through Sept. 5, from 10 a.m. to 5 p.m. daily.

The project will put proceeds from ticket sales toward scholarships and internships to those in the BIPOC community interested in careers in design, through collaborations with educational programs and other nonprofit groups.

The opening night event for The Firehouse Showhouse is Friday (Aug. 19), 5:30 to 10 p.m. Tickets are $150 by visiting thekaleidoscopeproject.com/events.

General admission viewings are from 10 a.m. to 5 p.m. daily from Saturday, Aug. 20, though Monday, Sept. 5. Tickets are $35 through thekaleidoscopeproject.com/events.

Proceeds from ticket sales go toward The Kaleidoscope Project’s objectives of providing scholarships and inspiring internships to those in the BIPOC community interested in careers in a creative field.

Tristan Whalen, a student at Williams College and a western Massachusetts native, writes about architecture, design and the built world for The Berkshire Eagle.