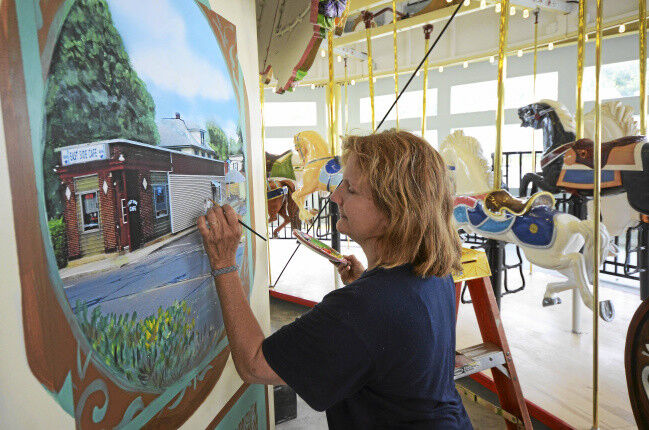 Teri Davis puts the finishing touches on a painting on the Berkshire Carousel in Pittsfield in June 2016.

A copy of the document awarding a $1.22 million mortgage by the Berkshire Carousel Inc. to James and Jackie Shulman. 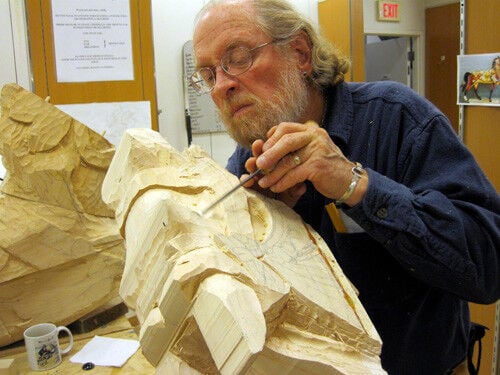 Master carver Walter Ruess works on a large horse for the Berkshire Carousel in 2011. 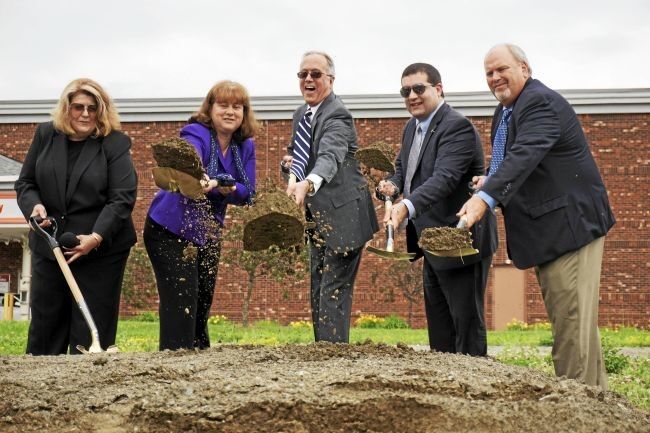 PITTSFIELD — In his most recent public appeal, Berkshire Carousel Inc. founder James Shulman called the creation of the historic Americana amusement “a gift to my home area of the Berkshires.”

“The carousel was a gift to the community. The building and property were not a total gift.”

But in a quiet transaction the year before, Shulman and his wife got a big present in return.

In May 2018, the nonprofit carousel’s board, controlled by members and friends of the Shulman family, granted James and Jackie Shulman a $1.22 million mortgage on the site of the carousel at Center and South Church streets, according to a deed filed with the Berkshire Middle District Registry of Deeds.

The mortgage document does not specify any payment by the Shulmans that would entitle them to a promise to receive that amount of money from the nonprofit.

“The carousel was a gift to the community from the two of us, dedicated volunteers, sponsors and donors,” Shulman said. “The building and property were not a total gift.”

Shulman says the mortgage was granted by the board in recognition of the money that the couple had personally invested in the carousel, particularly after building costs mounted before the attraction opened in 2016.

The board’s vote came shortly before the carousel’s third and final season, when its hours were reduced to weekends after it faced staffing problems. Shulman said he recused himself from the vote. The board’s members include Shulman (president), Monte Wasch (treasurer), Jamie Lacroix (clerk), Marjorie Shulman, Frank Bonnevie, Rocco Dinicola and Nancy Shulman.

The debt, payable to the couple on Jan. 31, 2028, is one of two financial realities that could potentially complicate the founders’ efforts to put the carousel into new hands.

The other factor is the condition that two state agencies, the Massachusetts Cultural Council and MassDevelopment, placed on a $250,000 grant to the carousel.

If the carousel is sold to a for-profit operator, or to an unrelated nonprofit that no longer uses it as a “cultural facility,” the grant must be immediately repaid, according to a spokeswoman for the MCC.

The state’s Cultural Facilities Fund provided the carousel with $266,875, including a $16,875 grant in 2009 that was meant to help the carousel prepare a feasibility and strategic plan.

On top of that, the state’s 2018 fiscal year budget included a $25,000 allocation, known as an earmark, that was to be used to help the carousel meet requirements of the Americans with Disabilities Act.

Shulman said this week that the mortgage amount was set as a way to protect the couple’s personal financial investment, and possibly repay the MCC grant, and came at a time when he was newly aware of unpaid bills and other liabilities.

“I had no idea what the expenses of that building were going to be until after the carousel opened,” he said. “We got bills for over a year and a half from companies that had not been paid. I had no idea.

“When we set up the mortgage, it was to be sure that we could cover impending bills that we didn’t know about (and) some of the expenses that we would have to lay out.”

He said he and his wife do not intend to insist on a payment of $1.22 million. “We would bring the figure down to a reasonable amount,” he said. 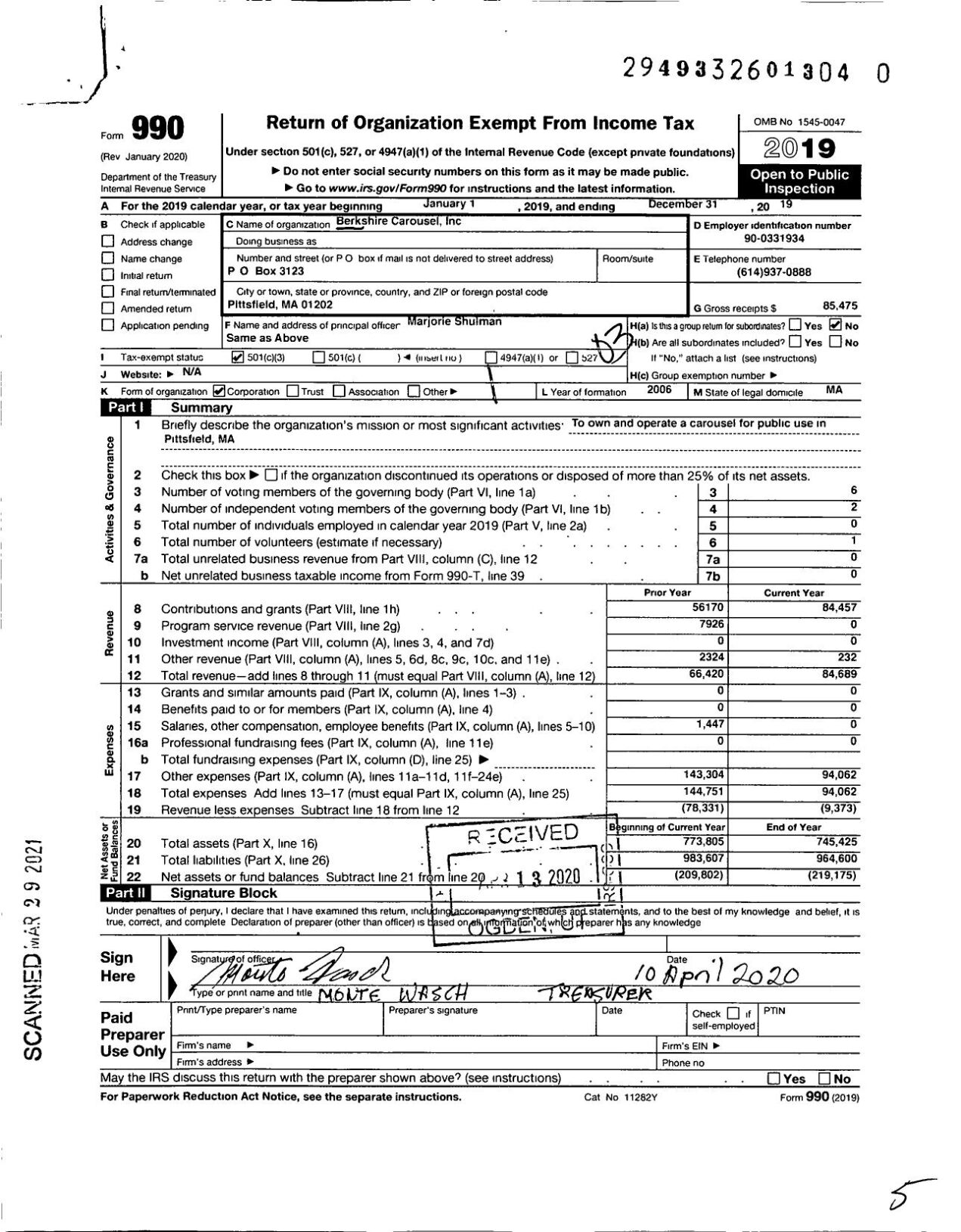 “To me the actual mortgage is just a figure. It was advised by attorneys or accountants and put down. It’s not something that we’re going to hold fast to. Quite frankly, we’re not asking for the money,” Shulman said.

Instead, the couple may decide to donate an amount of any sum returned to another cause close to Shulman’s heart: exhibit space for items illuminating Berkshires history.

“It’s quite possible that a good chunk of the mortgage would be donated back to the community,” he said.

Near the time of construction, the overall cost of the carousel was estimated to be $2.3 million to $2.6 million, according to Eagle archives.

“The carousel itself, we received zero — not a penny from city, county, state or federal government,” Shulman said. “It was financed largely by my wife and myself and by sponsors of the (carousel) figures and a few fundraisers.”

The nonprofit’s IRS Form 990 says that from 2010 to 2017, it received just over $1.4 million in public support, a figure that would include contributions from the Shulmans.

Instead, the nonprofit’s IRS filings show total revenue in 2019 of $84,689, almost all of it from grants and contributions.

Now, as Shulman seeks new people willing to take over operations of the carousel, the attraction is far from the picture sketched in TDI’s strategic plan, a copy of which was obtained by The Eagle.

“The Carousel buzzes with energy,” a section in the plan called “Vision” reads. “There is a sudden rush as swarms of children and adults alike race onto the wooden deck to choose which brightly painted horse will transport them. … Just as dusk begins to creep in through the skylights above, the lights of the Carousel blaze forth, and the ponies begin to spin once again: the excitement of another summer evening at the Berkshire Carousel.”

Inside the collapse of the Berkshire Carousel dream. Why it stopped turning and what may come next

EAGLE INVESTIGATIONS: Having invested all its resources in getting to its debut weekend in 2016, the nonprofit Berkshire Carousel lost ridership the next two seasons and didn't see a fourth. As a new chapter nears, a look back at why a project that drew 400 volunteers failed to take root.