PITTSFIELD — The local NAACP chapter is calling on Pittsfield’s elected leaders to overhaul how the city responds to people in the throes of a mental health crisis – and to consider shifting that duty away from police.

The group is speaking out in the wake of the fatal police shooting of Miguel Estrella on March 25.

“Change cannot wait. Our communities of color continue to experience trauma as a result of law-enforcement officers’ actions and the inaction of our elected leaders,” the chapter said in a statement Thursday.

“It is irresponsible and dangerous to allow these circumstances to persist,” the statement said.

Dennis Powell, the chapter’s president, said in an interview that the group’s leaders believe much more can be done to prevent violence.

“We never thought this would happen in our community, but it has. We have to come to some solution,” he said. “What we know is that what we have isn’t working.”

The chapter’s statement was recently approved by its executive committee, after being drafted by its political action committee.

The chapter asks Pittsfield’s elected officials, both municipal and state, to take specific steps. They include:

– An assessment of Pittsfield Police Department “functions,” led by people named to an advisory commission who, the group says, represent the city’s diversity and have “lived experience” of the issue.

That group, the chapter says, “will be tasked with researching non-violent crisis response best practices and models … and, authorized to recommend for adoption a new city department appropriate to the circumstances of Pittsfield.”

– Steer any new state funding to strengthen responses to people in mental-health crises not to the police department but to an “independent … peer and practitioner-led, mobile crisis unit.”

– Support proposed legislation, known as the ACES Bill (H. 2519), that would “increase the availability of non-law-enforcement, unarmed community-based response options for calls to 911.” The bill was filed in February 2021 by Lindsay N. Sabadosa, D-Northampton. 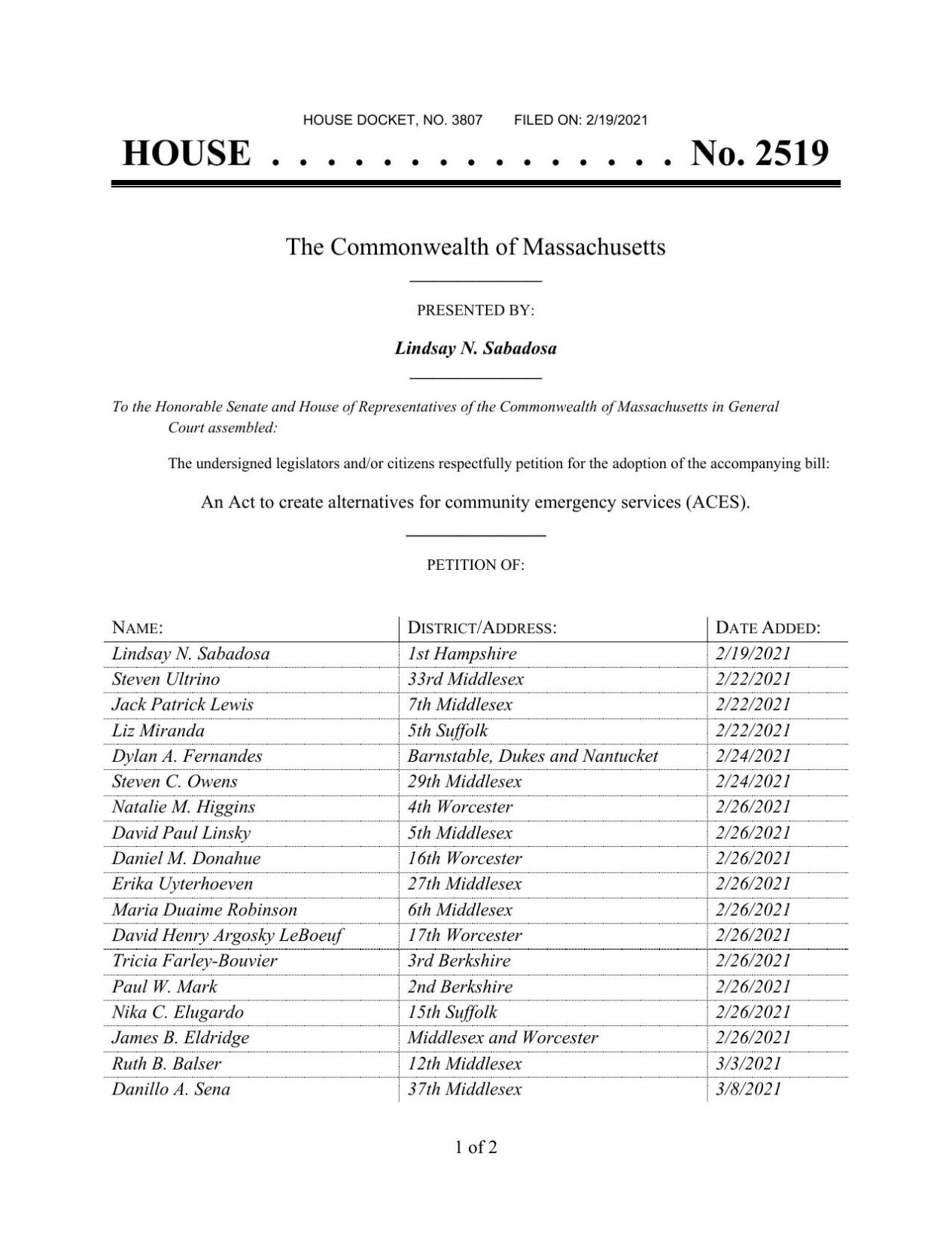 State Rep. Tricia Farley-Bouvier, D-Pittsfield, is a co-sponsor; the bill was referred last year to the Public Safety and Homeland Security Committee after a hearing last summer.

The clinician who has augmented the Pittsfield Police Department’s response to people in crisis had just ended a shift on the night Estrella was shot outside his apartment building on Onota Street.

The chapter says that program is insufficient, echoing calls from others locally in the wake of Estrella’s death.

The statement asserts that city officials should not rely mainly on police to respond to mental-health calls – and points to programs elsewhere in Massachusetts and in Oregon.

“There are many [alternatives in] responding to non-violent emergency calls every day in this country,” the chapter’s statement says.

It points, for example, to the Crisis Assistance Helping Out On The Streets (CAHOOTS) program in Eugene, Ore. That program’s staff, the statement says, handle “social service type calls for service, including crisis counseling … and transport for people who are intoxicated, mentally ill, or disoriented.”

“Mobile crisis response teams serve our neighbors. Our current co-responder program in Pittsfield does not,” the statement says.

The proposed advisory commission would be asked to examine programs already up and running that use people other than police officers as first responders for mental health emergencies.

“We’re just really trying to put our heads together and look at the models,” Powell said in the interview Thursday. “We don’t have to reinvent something if there are sound projects that are working. Let’s see if we can adopt some of that into our community.”

By “lived experience,” the chapter means that the commission should interview those who have seen firsthand the challenge of providing safe and proper responses to crises.

“You should talk to people who have used a crisis response, to see whether or not it was working for them. This is all about building trust.”

Powell recently joined the city’s Police Advisory and Review Board. He said that group also intends to consider reform in how Pittsfield responds to people in crisis.

BolaWraps, a cell tower lawsuit and mental health supports: These are the three biggest items at the City Council meeting

The biggest topic of the Tuesday evening meeting, councilors spoke about feeling compelled to act after months of hearing the community's cries for more resources and better outcomes for residents struggling with their mental health.

DA's report on police killing of Miguel Estrella is being edited. Findings won't be public until his family is briefed

The Berkshire DA office now says the results of its investigation of the police killing of Miguel Estrella will be released to the Estrella family the first week of August. The report will then be made public.