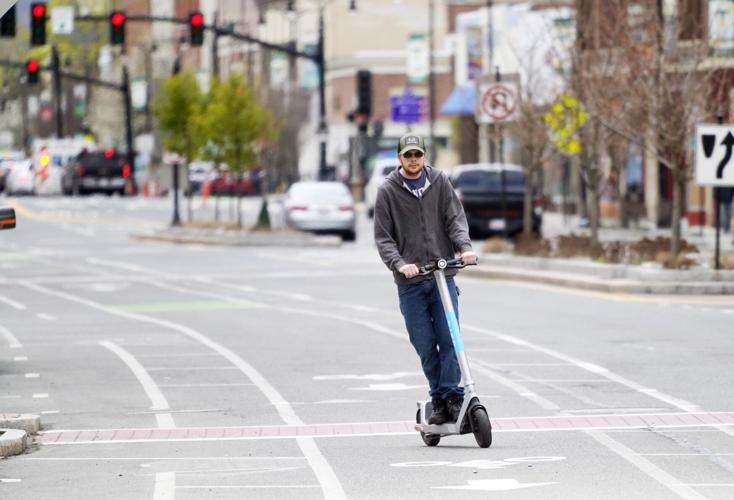 Zachary Londergan takes a spin on one of the Bird e-scooters on North Street in Pittsfield. 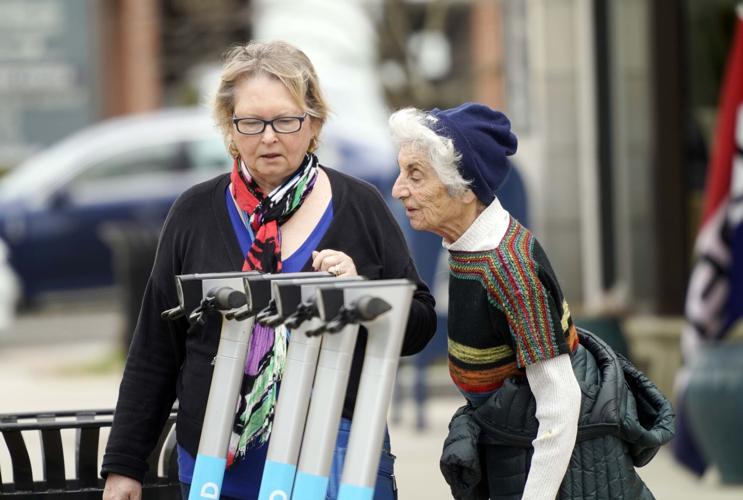 The Bird e-scooters on North Street in Pittsfield are drawing attention. They require an app on your smartphone to use. 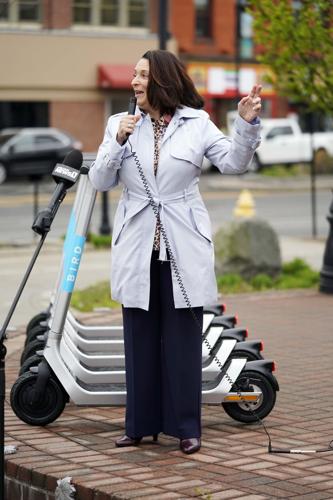 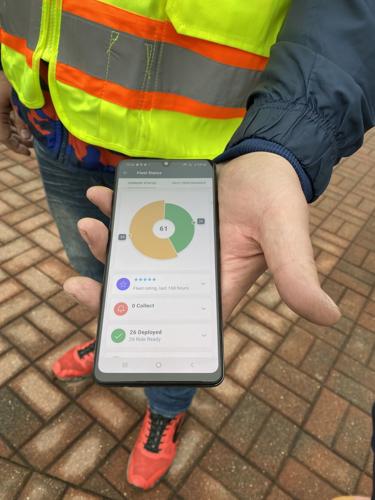 Jim Sevigny, one of two fleet managers in Pittsfield, shows how he and the other Bird fleet manager keep track of the e-scooters.

PITTSFIELD — The Berkshires, with all its natural beauty, is no stranger to bird sightings. But a bird of a different sort has just made its home in Pittsfield.

Last week, a fleet of sleek, silver and blue electric scooters — known as Birds — arrived in the city’s downtown.

Since then, the scooters have been used for 905 rides as part of a soft launch, officials said Wednesday.

It’s part of a profit-sharing agreement between Bird, based in Santa Monica, Calif., and the city of Pittsfield.

“I’m really excited that this new business has chosen our city as a place where we can have multiple modes of transportation,” Mayor Linda Tyer said during a press conference to formally roll out the program. “I don’t know about you, but every time I see someone on a scooter or see one of them parked, it makes me smile.”

Bird, which launched in 2017, operates in more than 400 communities around the world and is dedicated to supporting e-scooters as an environmentally friendly mode of transportation.

Pittsfield officials said they did a double take when the company reached out last fall offering to bring scooters to the city. Public Services and Utilities Commissioner Ricardo Morales said he had to make sure it wasn’t a spam email.

In the months since, the city and company have worked out the details, and when the scooters hit the streets last week, Pittsfield became the first city in Massachusetts to have a full-time e-scooter program, the company said.

Here’s everything you need to know about catching a ride on the city’s newest form of transportation:

How to take a ride

The key to start up a Bird scooter is the app. Riders have to download the app off the App Store or Google Play Store and create an account. Then riders have to pick a payment method and preload the account with funds to cover the cost of future Bird rides.

The Bird e-scooters on North Street in Pittsfield are drawing attention. They require an app on your smartphone to use. Also, they should be r…

Once logged in, the next step is to find a scooter. The Bird app hosts a live map of where every active scooter in the city is parked. From this map you can see where the scooters are, how much charge they have and if they’re available to reserve. When you’ve picked and found a scooter, open the app and hit the blue scan button at the bottom of the live map.

Scanning the QR code on the top of the scooter unlocks it and turns it on. Everything you need to power the scooter is located on the bike’s handlebars. On the right is an accelerator you can control with your thumb, on the left is a hand brake similar to a bicycle’s.

To get going, riders stand on the scooter, give it a good push forward and then slowly press down on the accelerator.

What are the rules?

Scooters are meant to be ridden in the city’s existing bike lanes. In Pittsfield, the speed limit for e-scooters is 15 mph. Bird recommends using a helmet, but state law doesn’t require it for bike or scooter riders.

The scooters can be left anywhere in the city as long as the scooter is upright, out of the right of way and isn’t blocking sidewalks, doorways or accessibility ramps.

How much does it cost?

Each ride has a base fee of $1. Once someone starts riding the scooter, an additional usage cost of 39 cents per minute is tacked on. Think of these costs as the base fare for getting in a taxi and then the mileage fare for how far you drive.

A moderately paced ride — let’s say 10 mph — between the Berkshire Medical Center campus and the Berkshire Museum or roughly the length of North Street, will cost around $4 before tax.

Most of that money is going to Bird, but a small part of the cost for every ride comes back to city coffers. Under its profit-sharing agreement with Bird, the city gets 15 cents per ride. Morales said the arrangement is similar to a state tax on ride-share companies like Uber and Lyft, which have to pay 20 cents per ride to the commonwealth.

“Combined with other programs that are related to the same thing — shared mobility and micromobility — we can use that money to accomplish things that improve safety and the experience while using those modes of transportation,” Morales said.

Where can I go?

The scooters can cover 35 miles on a single charge, a distance that can easily take you from one end of the city to the other several times over. Morales said the scooters are really meant for commuting.

“I’s not recreational — although people may use it recreationally,” Morales said. ”The focus is really commuting and we want that to be the goal: to improve access between places.”

While city officials hope that scooters help get people to places current transportation systems don’t, it’s not exactly a free-for-all when it comes to scooter use in Pittsfield city limits.

Scooters aren’t allowed in city parks — including the city’s skate park. These areas are “geofenced” by Bird and marked with a red border on the map. The scooters are tracked by GPS technology inside the scooter so even when no one’s riding Bird employees know where each scooter is at all times.

If a rider enters into a no-ride zone, the scooter will slow down to a stop and the app will notify the rider that they can’t ride in the area.

So can anyone use it?

Not quite. Bird does have programs for people without smartphones or wireless payment options. But the company draws the line at riders under the age of 18 — sorry, kids.

Right now, riders have to check a box when they set up their account to confirm they’re over the age limit, but city officials and company representatives are working to roll out a feature of Bird’s app that would require riders in the city to verify their ID before they use the scooters.

Who’s taking care of these things?

Pittsfield has two “fleet managers”: Jim Sevigny and Tim Lanfair. The men are responsible for charging, maintaining and wrangling 122 scooters. The managers work to rotate the scooters in and out of use so that only about 40 scooters are available to rent at a given time.

Sevigny and Lanfair’s days are spent picking up scooters in need of charging or repair and monitoring an app for any notices of an “unlicensed move” — that’s anytime the GPS on the scooter notes that it’s moving without a rental.

“That means that somebody’s moving it without permission,” Sevigny said. “We’ll get a ping and those are a priority for us.”

Lanfair said these pings are happening already. Last week, he got a notice of an unlicensed move and used his fleet manager app from his living room to set off an alarm on the scooter. He let the alarm ring as a deterrent for any further movement until he was able to pick up the scooter.

This management system is how Bird keeps its scooters from being stolen or vandalized. Sevigny and Lanfair said they’re hoping this kind of monitoring only ends up being a small portion of their day to day. They’d much rather be charging Birds up and getting more people on scooters.

“I like technology and I like that it’s actually doing some good,” Lanfair said. “Less carbon footprint, less people in cars is a good thing. So I actually feel like I’m doing a little something to help out.”

When Berkshire Flyer service got the green light this week, it seemed a dream of easier rail trips linking New York City with Berkshire County had been achieved. But simply getting to Berkshire County isn’t the whole story for rail travelers. We follow one family trying to get four miles in Pittsfield without a car.

A charging lithium-ion battery, used for a remote controlled car, caused a fire in North Adams

Mitchell Chapman: A few months in, what is the impact of Bird e-scooters' prevalence in Pittsfield?

Eagle columnist Mitchell Chapman kicks the tires of Pittsfield's e-scooter situation, from both a ridership and policy perspective.