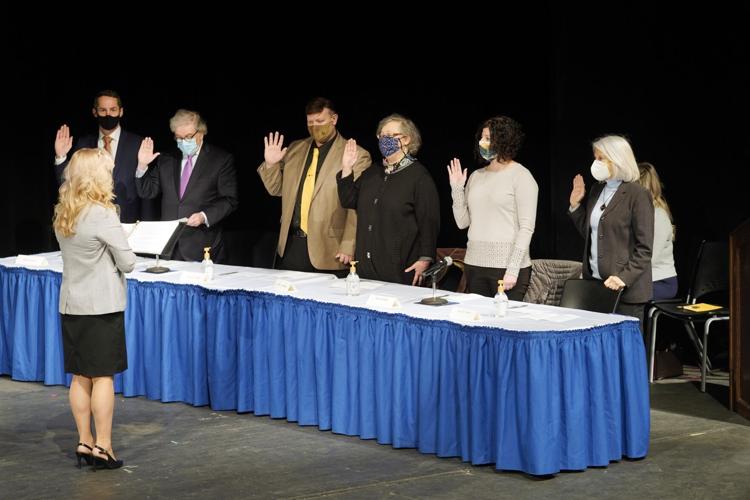 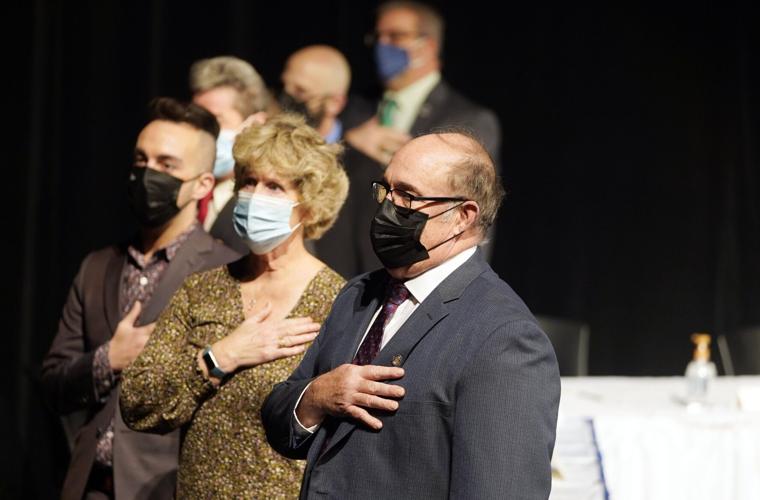 Members of Pittsfield City Council recite the pledge of allegiance before being sworn in Monday during a ceremony at Berkshire Community College's Boland Theater.

PITTSFIELD — A new batch of city councilors and School Committee members swore on Monday to “faithfully and impartially discharge” their duties as representatives for the residents of Pittsfield over the next two years.

The ceremony at Berkshire Community College’s Boland Theater — officially an organizational meeting of the City Council — was to be largely ceremonial, but the inauguration of several new city councilors led to the first contested action of the year and may preview future division within the council.

Who's who on the City Council

There's a new configuration to Pittsfield's 11-person City Council. Here's who's on the council for the 2022-2024 term.

Following the councilors’ swearing in by City Clerk Michele Benjamin — who took her own oath of office on Monday — the group set out to select the new council president and vice president for the term. Marchetti was nominated and elected unanimously for another term as president.

Lampiasi nominated White to serve as council vice president. Then Kalinowsky nominated Sherman for the role as well. When asked whether they accepted the nominations White accepted, and Sherman said “I appreciate it but I do not.”

Ultimately, the council was unanimous in selecting White as vice president.

Kalinowsky, Kronick and Warren said during the campaign that they’re hoping for more transparency and collaboration with the City Council from the mayor when it comes to the spending of nearly $41 million in federal coronavirus relief money.

The newly sworn-in councilors could be some of Mayor Linda Tyer’s toughest critics in the coming years as the mayor begins spending the federal money. The councilors may pick up the mantle of former councilors Kevin Morandi and Chris Connell, longtime challengers to the Tyer administration’s work.

“It is my hope that the newly elected members of the City Council and the returning veterans will spend time getting to know me and the city’s leadership team — we view ourselves as your partners, not your adversaries,” Tyer said in the State of the City address that followed the oaths of office. “Please join me in starting this new term with that mindset.”

'Promise and possibility': Mayor Linda Tyer lays out vision for Pittsfield's future in 2022 State of the City address

In the coming term the committee will discuss the results of an ongoing school safety study, which could decide whether or not city school district continues to use school resource officers, the results of a master plan study that focuses on Crosby, Conte and Morningside elementary schools, and the work of the district’s newly formed Equity Task Force.