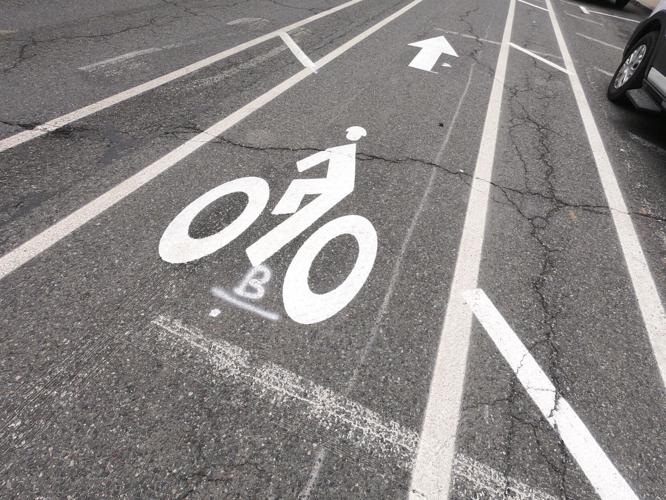 A bike lane is seen in downtown Pittsfield, part of a North Street redesign that was first launched in late 2020. The new lanes have “calmed” traffic and decreased accidents, a consultant's report says. 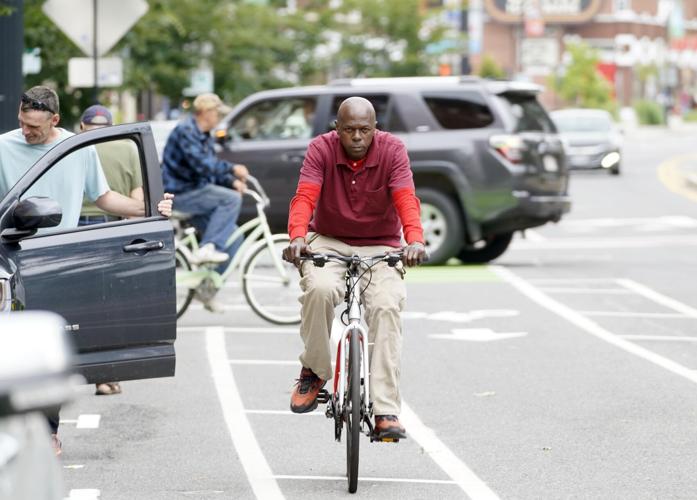 A bicyclist takes advantage in 2021 of newly created bike lanes on North Street in Pittsfield, part of a plan to make the city more bicycle friendly. 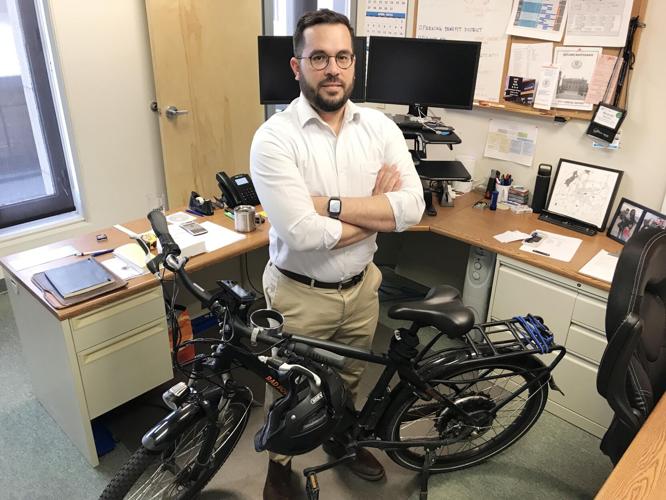 Ricardo Morales, Pittsfield's commissioner of public services and utilities, often commutes to work on an ebike. Morales briefed councilors Tuesday on a report about new bike lanes on North Street. “It’s very important to place all these numbers in context to understand what we accomplished safety wise on North Street,” he said.

PITTSFIELD — Bicycle lanes on North Street have “calmed” traffic, decreased accidents and garnered the support of public safety officials in the city, according to a new report, accomplishing what the city set out to achieve nearly two years ago.

The result: “A complete street that promised greater access, safety, and enrichment to residents regardless of their mode or reason for use.”

That finding brought questions from city councilors Tuesday, after Commissioner of Public Services and Utilities Ricardo Morales presented the report, prepared by transportation and engineering consultants.

One councilor suggested the report didn’t square with the “eyeball test” — and continued criticism from city residents.

Leading the safety statistics were data from a two-year, month-by-month look at crashes on North Street. Crash data from police reports shows that a six-month period between October 2020 and March 2021 saw the most accidents of the two-year span, with 22 crashes.

This period encompassed much of the first iteration of the bike paths, installed with state funding in November 2020. In June 2021, the city implemented the current bike lane design — a double-buffered lane.

After the design change, Morales told the council, crash data showed a 77 percent decrease from a peak. Between October 2021 and March of this year five crashes were reported.

Morales said that downward trend is of particular note compared to city and state data. Between 2020 and 2021, crashes across Pittsfield rose 19 percent to a total of 897. In that same period, Massachusetts saw a 23 percent increase in crashes to a total of 124,353.

“It’s very important to place all these numbers in context to understand what we accomplished safety wise on North Street,” Morales said.

The survey included a 40-person survey which councilors pushed the commissioners to expand. Morales said the results of the one-day survey, taken on North Street in June, turned up 24 people who said they liked the bike lanes, nine people who were neutral on the lanes and four people who disliked them.

The commissioner also said his department’s review of parking data shows that though there was a dip in vehicle trips after the design changes, drivers continue to treat the street as a destination.

Morales, steadfast in the survey’s methodology, faced pushback from several councilors who questioned how the report could say one thing and frustrated residents could say another.

“I don’t debate your numbers, you clearly have a lot of analytics here,” Councilor Kevin Sherman said. “But it’s like sports these days, you have analytics and then there’s the play and the eyeball test.”

“And the eyeball test, I would say to the majority of the city is not favorable to it,” Sherman said.

Councilor Karen Kalinowsky said she used to patrol North Street by bicycle in her days as a Pittsfield police officer. Now she says she fields calls and complaints from residents who say the design has made driving more dangerous and confusing.

In January, Kalinowsky signed on to a public petition to revert the street to its original two lanes of vehicle traffic. That petition received just over 1,200 signatures.

“I’m not against bike lanes,” Kalinowsky said. “When you do it correctly it’s safer. It’s nice to say that you got input from like the [police chief] down to everybody — but I will tell you the people I’ve talked to think it’s dangerous up there, in regards to law enforcement.”

Mitchell Chapman: Motorists' concerns deserve to be heard, but North Street's future should be driven by data

“As controversial as the bike lanes are, I wanted to let you know how the response from headquarters on Columbus Ave. have been,” Sammons wrote in a June email to Morales. “The consensus is that the bike lanes give vehicles a place to move during [an emergency] response.”

“We have since discovered our trepidation to be unfounded and find the new traffic configuration to have no negative impact on our responses and it has had some positive benefit to us,” Andrews wrote, adding that “any negative issues we observe are almost always rooted in the behavior of drivers ....”

“From a traffic and safety standpoint, the results of the change have been successful,” Wynn wrote.

Morales said the city continues to seek ways to improve the street’s design. That includes other means of delineating the bike lane from the traffic lane, tweaking of stop signal timing and additional signs to direct residents through the lanes.

Councilors told the commissioner not to forget about North Street business owners.

“Being in business on North Street is kind of like being really popular in high school, but having really embarrassing parents,” says Jessica Rufo, owner of Dottie's Coffee Lounge at 444 North St. “We're all doing so well, but Mom and Dad are, like, passed out in the living room and, like, their car is always dented up.”

Upon the invitation from The Eagle, Mayor Linda Tyer walked Pittsfield's North Street to discuss the concerns of the business district, which include vandalism, parking tickets, and a lack of police presence.

Mitchell Chapman writes: "The inconvenient truth is that congestion improves public safety. While it might irritate drivers, it forces slower speeds and safe driving habits. When smooth, congestion-free rides for automobiles are prioritized in our roads, we create environments that encourage speed, which comes at the expense of everything and everyone else sharing the road with cars."