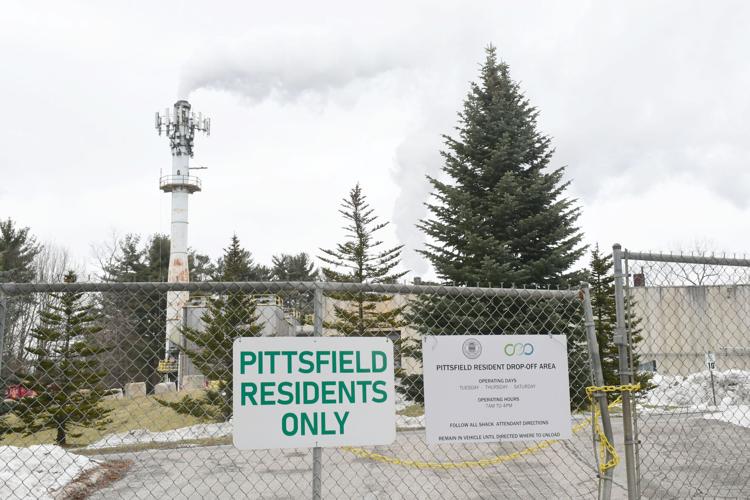 The federal Occupational Safety and Health Administration has cited Community Eco Power in Pittsfield with violations of workplace health issues concerning tests that found that employees were exposed to cadmium, lead and inorganic arsenic. Owners of the 5.8-acre Hubbard Avenue plant are contesting $26,107 in penalties. 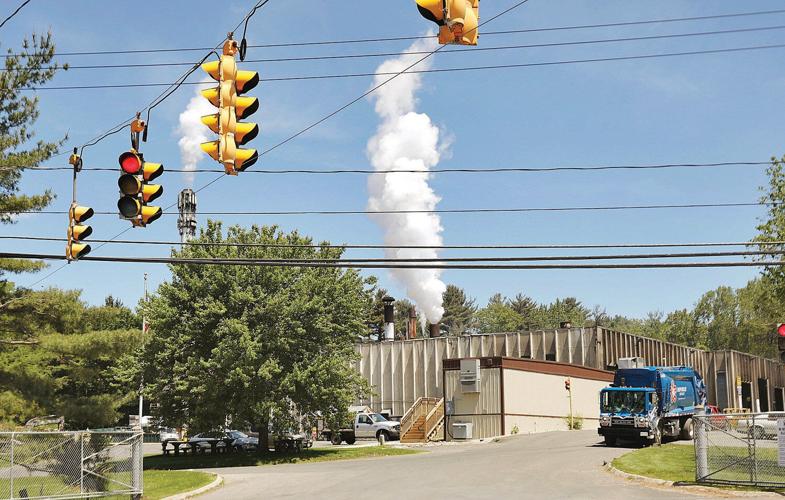 Community Eco Power LLC, of Black Mountain, N.C., petitioned in June for bankruptcy protection and hopes to sell its Pittsfield waste-to-energy plant to a company that would decommission the facility and use the land as a waste transfer station. The state Department of Environmental Protection has been negotiating with Eco Power to address problems with emissions.

PITTSFIELD — Workers at a Pittsfield waste-to-energy facility risked breathing in smoke containing arsenic, cadmium and lead, the federal government says, a finding that confirms other accounts of hazards at the bankrupt plant.

The federal Occupational Safety and Health Administration has ordered Community Eco Power LLC, of Pittsfield, to respond by April 4 to violations it lodged Feb. 15 against the Hubbard Avenue plant, when it imposed $26,107 in penalties.

Community Eco Power of Pittsfield is contesting $26,107 in penalties lodged by the Occupational Safety and Health Administration, which cited unauthorized releases of arsenic, cadmium and lead.

The company, which filed for bankruptcy protection in June, is contesting the fines. At the same time, correspondence shows it to be in talks with the state Department of Environmental Protection related to environmental problems, according to records in U.S. Bankruptcy Court.

Two former plant employees tell The Eagle that after Community Eco Power bought the facility in 2019, its top managers repeatedly failed to properly maintain the plant and protect workers and the surrounding area from hazardous releases. The plant uses trash as fuel to generate electricity and steam, both of which it sells.

“It’s the most toxic environment I’ve ever experienced,” one of the workers said. “It’s unhealthy. It’s hard enough to work there with the temperatures.”

The workers say they were required to sign nondisclosure agreements and spoke on the condition of anonymity.

The state DEP installed monitors on a plant building after receiving video evidence of improper smoke releases July 9, 2021. Videos obtained by The Eagle show smoke billowing from a structure on the plant’s grounds on the east side of Hubbard Avenue, about 300 feet from a Wendy’s restaurant. The plumes rise from a building, not smokestacks.

The former employees said the releases captured on video appear to have resulted from a failure to properly remove what is known as “fly ash” from the plant’s combustion system. That ash resembles brown sand and is a byproduct of waste-to-energy production. It normally is removed and taken to a landfill after it cools enough to allow it to be moved to containers.

In this case, the workers say it is believed that the ash was moved before it had cooled properly during a shutdown, leading a container bag to burn as the ash was pushed through a vacuum process, leading to releases into the atmosphere.

“They were spewing that up in the air, like, 60 feet,” a worker said. A report to the DEP led the agency to deploy an emergency response team, according to one of the workers.

“The management was totally negligent,” the worker said. “This is all due to poor management.”

“You’re blowing [out] cadmium and lead,” the other worker said.

On Sunday, The Eagle emailed Richard Fish, the plant’s president and CEO, as well as its environmental manager, seeking comment on the company’s handling of environmental issues. No response was received.

The DEP later collected air samples on a roof at the plant near bay doors and vents, had them analyzed, then turned over the results to OSHA. Last month, the agency issued eight violations it ranked as “serious.” In addition to citing workplace exposure to lead, cadmium and inorganic arsenic, the agency faulted Eco Power for not properly communicating with workers about hazards.

Separately, the DEP placed monitors along a fence at the edge of plant’s property, to assess any wider release of toxic substances in the “ambient air” of the neighborhood, according to Eva V. Tor, deputy regional director with the DEP’s Bureau of Air & Waste.

In a January email to the Berkshire Environmental Action Team, Tor said the releases detected by the DEP in October and November, well after the July incident captured on video, were “fugitive emissions” from what she characterized as leaks “that the facility has been attempting to repair.”

The emissions are deemed “fugitive” because all gases resulting from combustion are supposed to be routed through air-pollution equipment, according to people familiar with the process, and up the facility’s stack.

That is required by the plant’s DEP permit, which calls for pollutants to be captured and for gases going up the stack to be monitored in accordance with its permit. As of October, stack emissions were in compliance, Tor said in her January email.

Maintenance work at the plant included repairs to seals and gaps in the incineration system, as well as patches to ducts carrying flue gas.

Filings in U.S. Bankruptcy Court reviewed by The Eagle show that the company sought permission to hire Deltaway Energy International of California to help it confront emissions problems. Peter M. Kendrigan, the company’s president, said in a letter filed with the court that this firm would help Eco Power resolve issues with the DEP “for the mitigation of smoke.”

In her January email to BEAT, Tor said that the plant had made progress in reducing fugitive emissions. The highest emissions were detected in October.

Jane Winn, BEAT’s executive director, said she has not yet obtained findings from the DEP’s air sampling along the company’s fence.

“It’s going into the air. They bloody well should be concerned,” she said, referring to the DEP’s decision to test at the edge of the property. “Lead is a problem at any level. If the lead was in the air, it was bound to have fallen on the ground. None of that was supposed to be there.”

Inhalation of inorganic arsenic can cause lung cancer and is a skin irritant, according to OSHA. The agency calls lead “a potent, systemic poison.” DEP monitoring Oct. 16 and Nov. 5, 11 and 18 also found releases of mercury, chromium, cobalt, nickel, selenium and manganese. 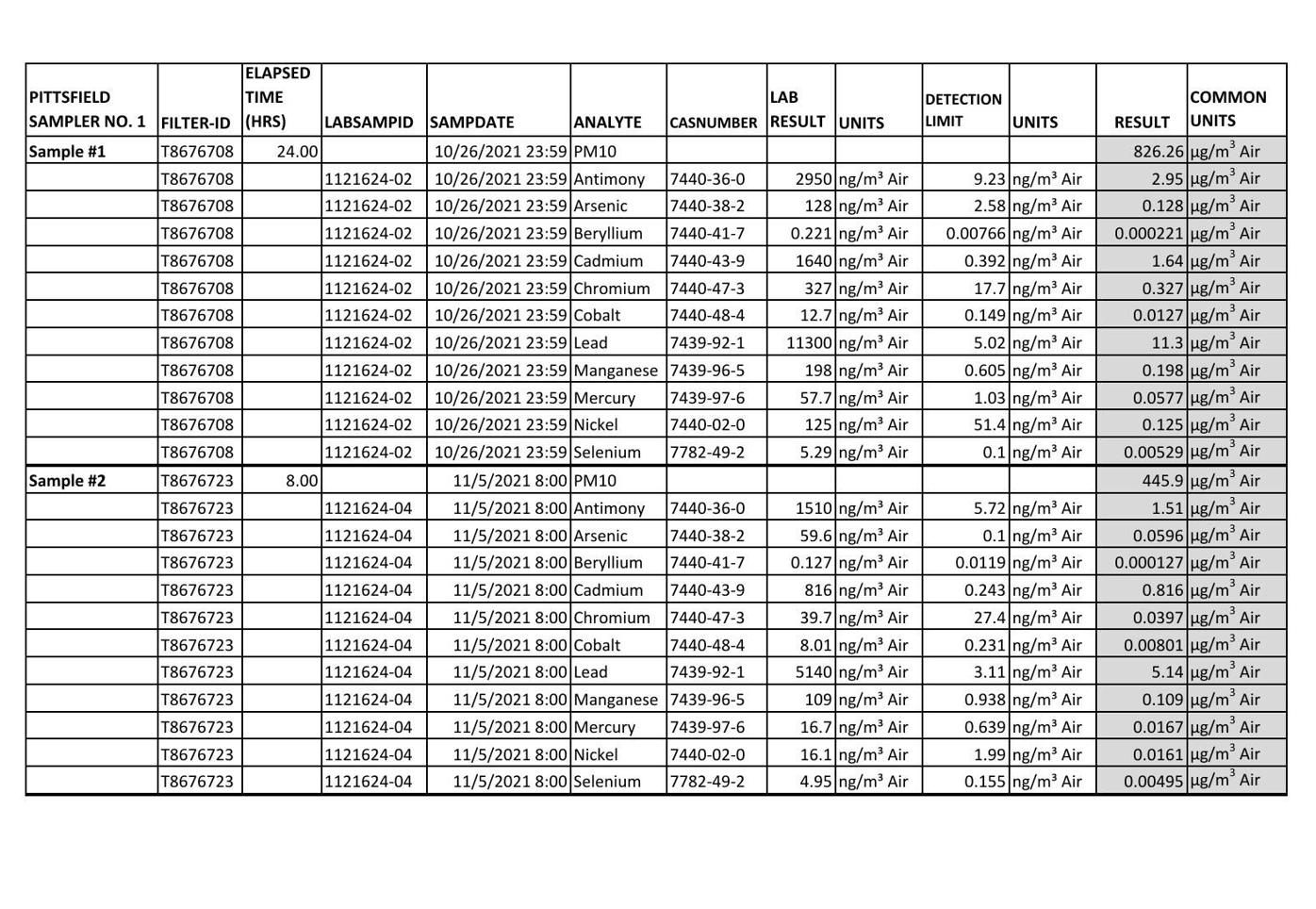 Winn said that tests should be conducted to determine the extent of pollution of the 500 Hubbard Ave. property, ahead of a proposed sale to Casella Waste Management of Massachusetts. “That needs to be addressed before anyone else uses the site,” Winn said, “to see what the levels of contamination are. This site needs to be remediated.”

The DEP is represented in the bankruptcy proceeding by the Attorney General’s Office. That oversight is meant “to ensure that the facility comes into compliance and that fugitive emissions will cease,” according to Tor. She said the DEP will continue to evaluate whether the plant is complying with air quality standards.

As recently reported, Eco Power is seeking bankruptcy court approval to sell the property to Casella for $1 million. The buyer would decommission the waste-to-energy plant and use the site as a transfer station that would ship waste to distant landfills. The plant’s permit allows it to burn 84,000 tons of trash a year, which translates to about 240 tons a day. Only about one-fifth of that fuel has come from Eco Power’s contract with the city of Pittsfield. The rest is trucked in from other sources.

If Pittsfield trash incinerator plant sale goes through it will close, which could mean you'll pay more for trash disposal

Pittsfield Mayor Linda Tyer met late last week with city officials to discuss the pending sale and its impact on how the city disposes of its waste. At the time of the bankruptcy filing, Tyer was told the company was seeking only to restructure its debt, not leave the business.

In 2016, the plant’s former owner, Covanta Energy Corp., said it would close in 2017 because of high maintenance costs. The city agreed to steer $562,000 in Pittsfield Economic Development Authority money to the facility for updates, staving off that closing. Covanta sold the plant to Eco Power in 2019.

“It’s going into the air. They bloody well should be concerned."

In August, Pittsfield reached a new three-year agreement with Eco Power, then two months into its bankruptcy proceeding. Tyer said the agreement included a provision requiring Eco Power to give the city one year’s notice if its service was to end.

“And now here we are,” Tyer said as a possible shutdown nears, a move that is expected to increase the city’s trash-disposal costs. “Facilities of this type are a thing of the past. From an environmental standpoint, this is better in the long run.”

With no other bidders, sale of Community Eco Power to Casella appears imminent

As part of the sale process, Community Eco Power had to make sure all "qualified bidders" had an opportunity to outbid the current offer to buy the plant for $1 million. Alternative bidders had until April 1 to send their bids to the company.