HANOCK—Jiminy Peak did not face any citations from an Occupational Safety and Health Administration investigation triggered by a deadly accident at the resort.

In January, Kimber Francoeur, a longtime snowmaker, died at Jiminy Peak Mountain Resort when a snow groomer backed into the snowmobile Francoeur was on.

OSHA said early this year that it was investigating and closed its case in June.

No citations or penalties were issued, but OSHA did send Jiminy Peak a letter with recommendations to address hazards. During an inspection “some conditions were observed which, although not in violation of the standards, are considered significant enough to be brought to your attention with the intent of encouraging your efforts to reduce exposure or eliminate it completely,” according to a letter sent to the resort in late April from Mary Hoye, area director of the Springfield office of OSHA. 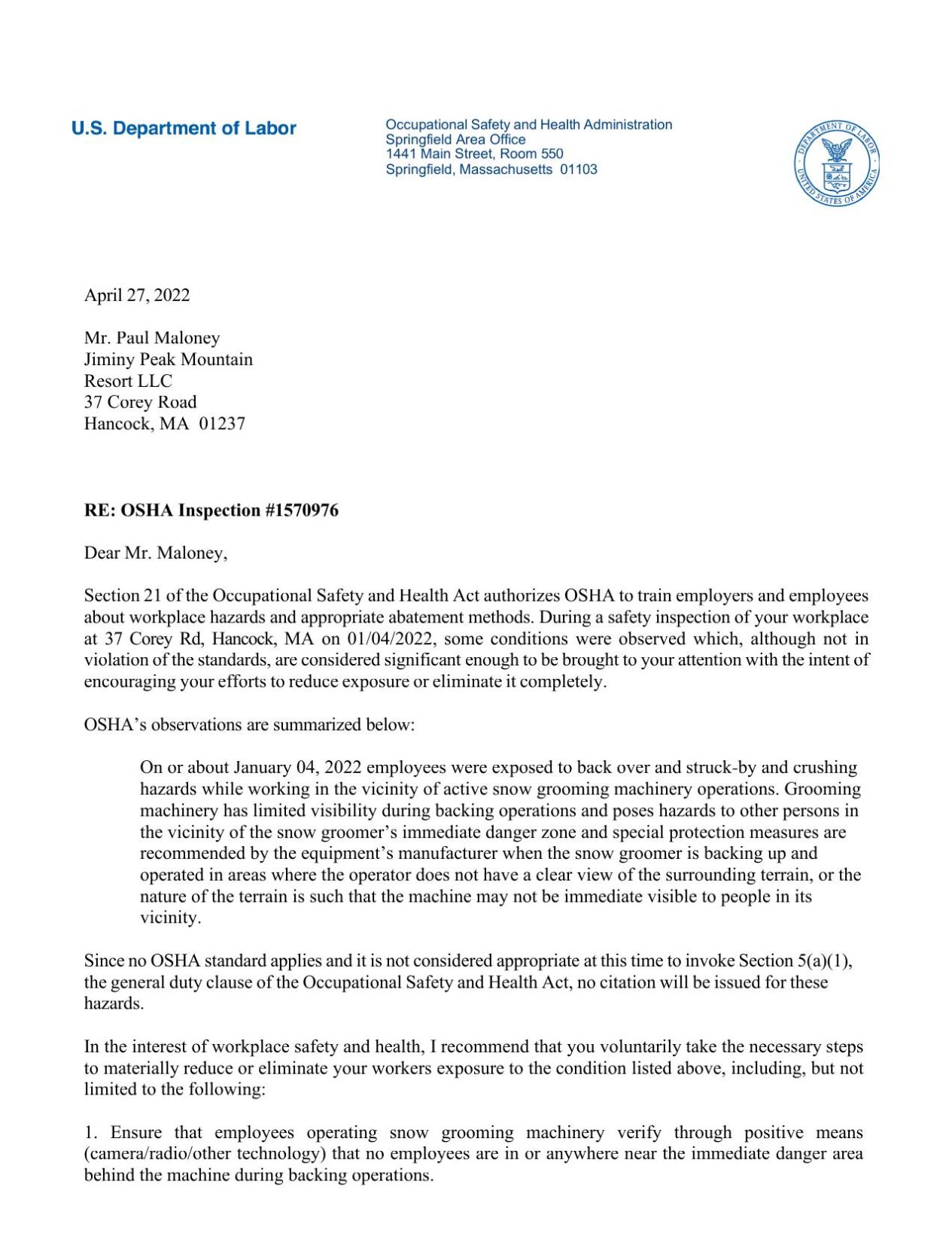 OSHA recommended precautions including making sure a groomer’s back-up warning alarm is working; looking into installing back-up cameras; and ensuring that employees operating snow groomers use a radio, camera, or other method to make sure no one is in the area when they back up.

The resort “cooperated and worked thoroughly with OSHA in that agency’s investigation of the heartbreaking and tragic incident of January 2022,” wrote Tyler Fairbank, president of the Fairbank Group, which owns and operates the ski resort, in an email to The Eagle.

In May, Fairbank continued, the resort “responded in writing to OSHA’s investigation report letter by adopting (or continuing recommended procedures already in place) for its operations all of OSHA’s recommendations listed in the letter.” Measures that were already in place: Those working near snow grooming operations are warned of danger, Fairbank said, and “snow grooming machines are currently subject to prior-to-operation checklists, which confirm proper horn, backup beeper, flashing strobes, and noisemaker functions.”

In a follow-up inspection, OSHA did not issue any citations or penalties and found there were improvements in minimizing back over hazards, a U.S. Department of Labor Spokesperson said.