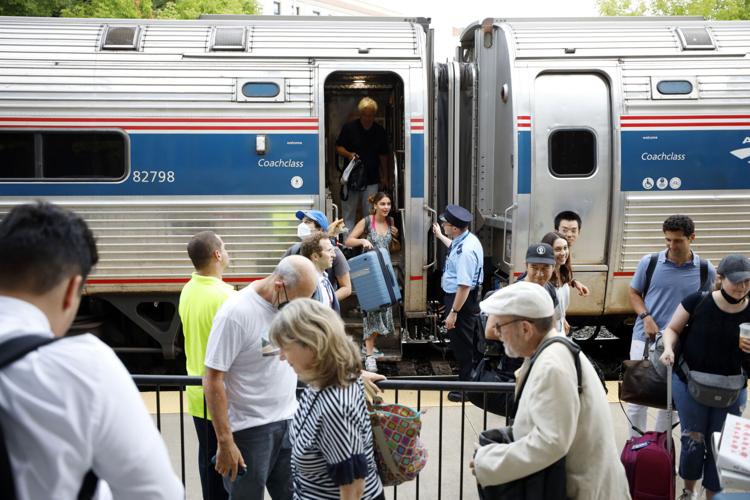 Passengers disembark from train cars after the inaugural trip for the Berkshire Flyer rail line from New York City to Pittsfield at the Intermodal Transportation Center. A new ARPA-funded marketing campaign focused on drawing millennial visitors to Pittsfield by hosting influencers and journalists in city this summer. 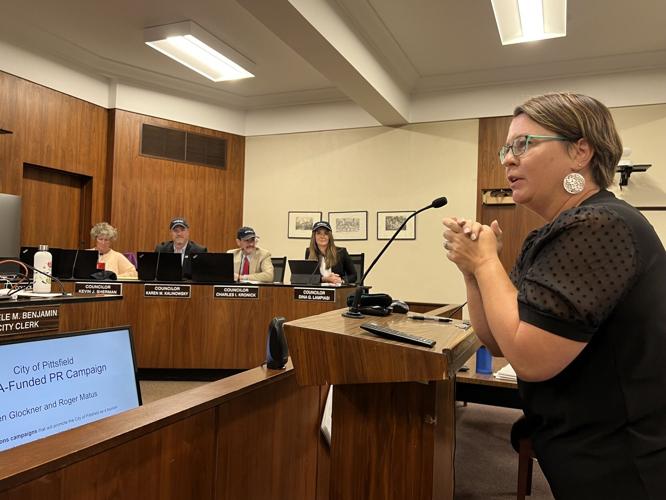 City councilors sport promotional "Love Pittsfield" hats as Jen Glockner, the city's director of cultural development, discusses how American Rescue Plan money has been used in a new marketing campaign for the city.

PITTSFIELD — City officials are welcoming influencers and bloggers to local attractions in an attempt to market and anchor Pittsfield in the region as a destination for millennial tourists.

And those efforts are beginning to pay off.

Jen Glockner, the city’s director of cultural development, told the City Council on Tuesday that in the first two months since Pittsfield hired a PR firm and launched a targeted marketing campaign, the city has been featured in The New York Times, The New Yorker, Forbes and Vogue, among other outlets. She said these articles and content from influencers who visited the city have received an estimated 4.2 million views.

Mayor Linda Tyer allocated $510,000 of the city’s nearly $41 million in American Rescue Plan money at the start of this year to a marketing campaign aimed at rebuilding “Pittsfield’s travel, tourism and hospitality economy-post pandemic."

This particular portion of the city’s marketing efforts is budgeted to use between $300,000 and $350,000 of that ARPA money — about 40 percent of which has been spent so far.

The campaign kicked off when the city hired Roger Matus, a local marketing consultant who led the city’s “Love Pittsfield” campaign to answer the question: “How could public relations and media be used to improve the economy in the city?”

Matus told councilors that as he set out to study Pittsfield’s tourist base and found that the demographic of visitors changed dramatically between 2013 and 2021.

In a presentation to the council, he said that today, 65 percent of city visitors are between the ages of 18 and 44. And the city is already well-stocked in the things that millennial visitors are looking for.

“They want a daytime of active outdoors and scenic beauty and a nighttime of music especially, shows, craft food, craft drinks and craft beer," Matus said.

The trick of this PR campaign, Matus said, is to meet millennials where they naturally seek out travel information: Google, Facebook, Instagram and TikTok. To this end, the city hired San Francisco-based PR firm Bospar.

The firm was selected after a request for proposal process, and began working with Pittsfield on May 1.

Between July and August, Bospar set up 10 trips with influencers to experience Pittsfield. Another four trips are set up through the end of the year.

“We inform [the influencers] that Pittsfield is the premier destination for the Berkshires, daytime and evening,” Matus said. “We have what are called FAM trips — that's familiarization trips — and we hook them up with local experts, we give them an opportunity to see what the city has.”

The average age of Berkshire County tourists is younger than you think — 11 years younger, actually

The next step in the campaign: repeat.

“What we have to do is create a regular cadence of coverage,” Matus said. “The more that happens, the more top of mind [Pittsfield is]. It builds on [itself], and influencers look at other influencers and they start to see, 'Hey, there's something going on here.' ”

Mayor Linda Tyer had planned to direct only another $100,000 to community organizations after granting $5.9 million in April. Tyer said when the applications for the second round came in, she decided to allot more.

Pittsfield invited 'influencers' in to help sell the city's charms. Here's what they had to say

Since July the city has hosted 10 familiarization, or fam, trips with the goal of attracting millennial visitors to the city and the bloggers and influencers they follow. The Eagle decided to take a look at what those bloggers thought of their visits.

How much of Pittsfield's American Rescue Plan Act money was allocated in 2022? And what's left of the city's $40.6 million?

Nearly 80 percent of all of Pittsfield’s federal coronavirus relief money has been set aside, spent or allocated to city and community projects — leaving about $8.9 million still to use as the city and nation close out the third year of the pandemic.