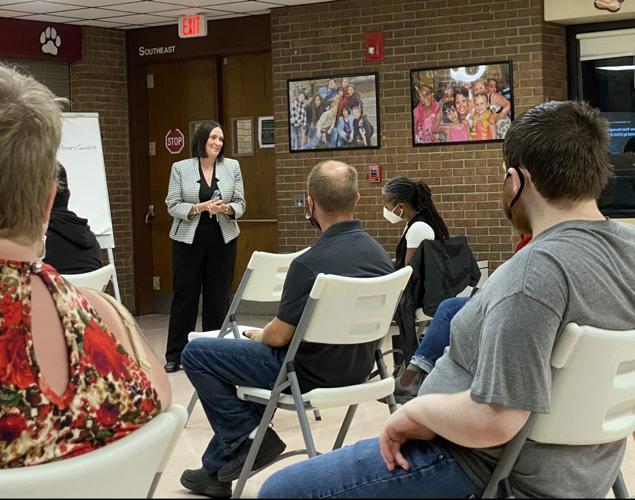 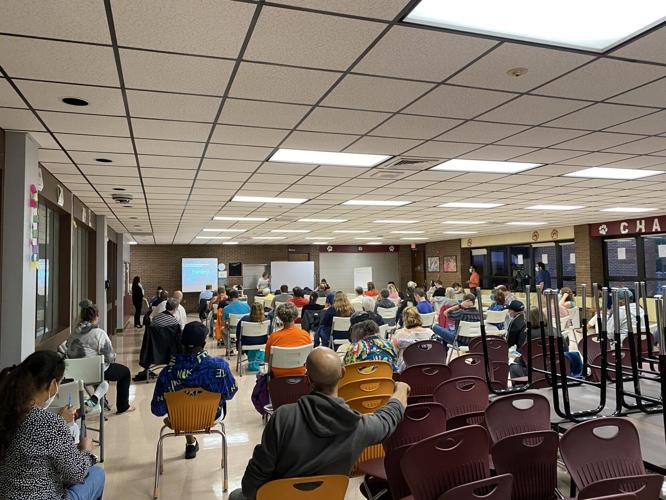 Those are the words a group of about 50 residents used on Monday night to explain to city officials what life is like during the pandemic in Pittsfield’s West Side and Morningside neighborhoods.

The residents and advocates from the network of social services and nonprofit groups in Pittsfield described a community stretched thin at a packed meeting of about 50 residents at the Morningside Elementary School cafeteria.

The meeting was the third of four conversations around how the city may spend its nearly $41 million in federal coronavirus money. It focused on housing, homelessness in West Side and Morningside.

“Our community members without housing don’t really have the luxury of waiting around for money to come into play,” Pittsfield resident Billy Keane said.

Community Development Director Deanna Ruffer told Keane that “we have half of our money already in our bank account and so once we hear from the community, which we felt was very important, we are able to be nimble in terms of some of these programs.”

Throughout the night city officials asked residents to rank a series of suggested project areas for the funds. Time and again the community pointed to the need for greater affordable housing, an expansion of services for unhoused people and services to create “healthy living environments” in the city’s poorest neighborhoods.

People in attendance said that quick action will be required to help the city’s poorest residents. Outreach workers said that they’re seeing neighbors on the edge of eviction and thousands of dollars in debt for rent and utility bills.

“We’ve guided them through this whole pandemic,” Tonya Frazier, a community navigator from Berkshire Bridges — Working Cities, said. “We’ve helped [people] get to resources they would not normally need.”

Community navigators, people who help translate and support residents who speak English as a second language, said that they are also seeing many renters being victimized and evicted because they aren’t aware of rental protections established during the pandemic.

The conversation focused not only on how to mend the wounds left by COVID, but also on how to respond to systemic issues made worse by the pandemic.

Much of the conversation Monday night centered on the neighborhoods that were singled out as “disproportionately impacted” communities in Pittsfield, a categorization Community Development Director Deanna Ruffer said came from the federal government.

As part of the American Rescue Plan Act, the federal government directed cities to look to “qualified census tracts” as a potential place to spend the aid.

Qualified census tracts are areas where the Department of Housing and Urban Development has found that at least 50 percent of households have income below 60 percent of the area median gross income or a poverty rate of 25 percent or more.

In Pittsfield, there are three qualified census tracts which span the West Side, downtown and Morningside neighborhoods.

Community members said a possible use for the federal funds would be fulfillment of longstanding promises for a community center in the West Side, a local business support initiative and direct investments in the neighborhood and its residents.

“Those who lack wealth are harder impacted by any vagary...any change in circumstance first,” Pittsfield organizer Kamaar Taliaferro said. “We should prioritize wealth development strategies through home ownership, that’s tried and true.

“In this moment those with money are better protected,” he added, saying that he would volunteer with the city to create socially responsible guidelines around the aid money to stabilize poor residents. “We all know that we can do better, let’s try.”

After city representatives filled a large pad of paper with a list of project ideas, Ruffer told residents that “the good news is we have lots of things we can do in these census tracts that we can’t do in other areas.”

“The tough news is that it’s going to be hard to make some choices,” she added.

Mayor Linda Tyer said she planned to continue to the conversations around potential projects with a seven to nine person advisory council that would “further narrow” the list of possible projects for “this once in a lifetime resource.”

Look Ahead, Pittsfield: ARPA talks continue and a possible Chipotle project looms on the horizon

PITTSFIELD — Community conversations continue this week on how to spend the $40.6 million in federal coronavirus relief money headed to Pittsf…

NORTH ADAMS — Money from the federal American Rescue Plan Act has started to flow into the city, but it's not yet clear exactly how it will be used.

The city's Homelessness Advisory Committee says that a severe deficit of affordable housing, shortage of support services and lack of understanding within the community have exacerbated the number of people who are experiencing homelessness in Pittsfield. That picture of the city came as school officials delivered a report saying this could be a high year for homeless students in the district.