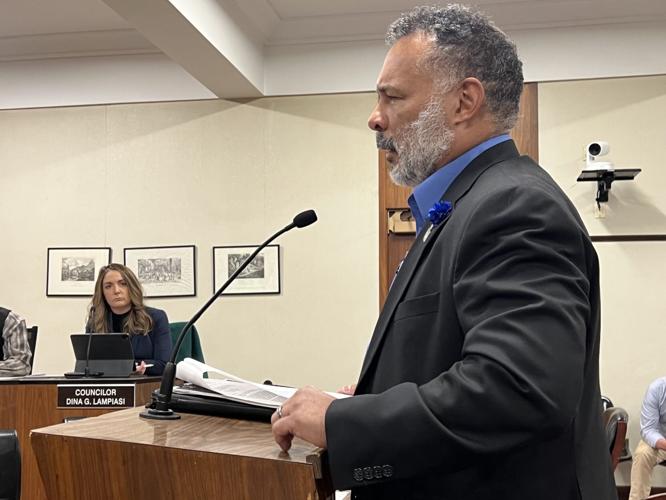 Pittsfield Police Chief Michael Wynn briefs members of the City Council Tuesday on a body camera pilot program that will begin this week. 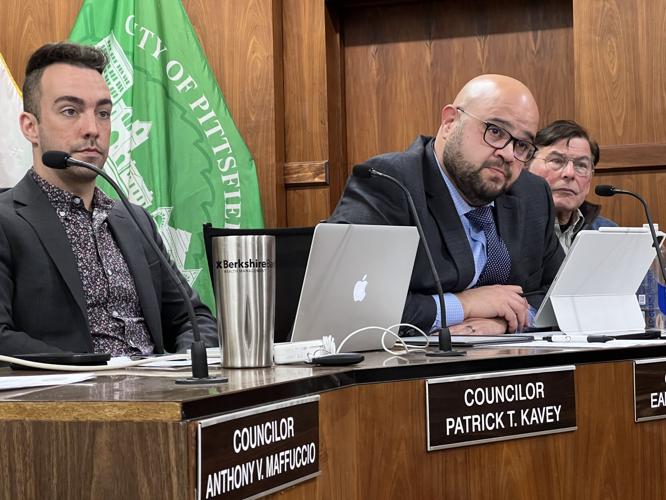 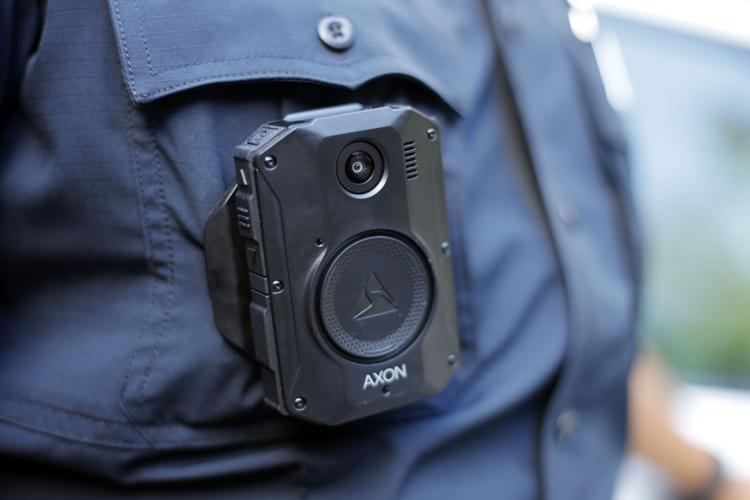 A Great Barrington Police officer wears an Axon body camera on his uniform at the station in September. Pittsfield is set to start a pilot program with the same body camera company later this week.

PITTSFIELD — Police Chief Michael Wynn says after a monthlong pause on a body camera pilot program, his officers will begin training Wednesday with Axon body cameras and kick off the program by week's end.

“I can say that all of the unanticipated issues that led to the delay at the end of October have been resolved and we’re back on track,” Wynn told the City Council in an update Tuesday night.

The council appeared to support that news — as well as word that the department was being awarded $166,586.73 in state funds to cover the cost of an initial contract with a vendor. Some members voiced concern that further issues might arise with the program.

Councilor Earl Persip III questioned the chief on how the program had been sidelined by concerns from the unions representing officers and supervisors within the department and how the chief could be sure no further “concerns” would arise during the pilot program.

“What stops any of the unions from having the same or another concern that stops this program?” Persip asked.

The chief said that a new memorandum of understanding has been signed with the unions.

“We have signed a separate memorandum of agreement relative to the collective bargaining agreement and we have their written assurances that they will support the implementation of the cameras,” Wynn said.

Persip asked whether it was standard practice to stop a pilot based on the types of concerns raised by the union. Wynn declined to answer in public.

“You have to understand the community has been waiting a while [for this],” Persip said.

It may be early spring before community members see the current force of 87 officers wearing body cameras. Wynn said as of the meeting, Axon was the only vendor to agree to a pilot program, but the general contract he reviewed said the company may not be able to supply the department with the 90 body cameras it is looking for until March.

The department had also considered vendor BodyWorn, but Wynn said the PPD may end its consideration of that vendor due to lack of responsiveness.

He said BodyWorn had invited the department to witness a demonstration of its cameras and technology but the department “didn’t have the opportunity to participate in that observation and we didn’t think it was sufficient enough to give us enough information to make a decision.”

If the department decides to pursue a contract with Axon for the body cameras, data storage and records retrieval software, the first payment of $106,515 would be due in January. About two-thirds of the grant funds received by the department from the state body camera program will cover that cost.

The remaining grant funds would go toward a second fee of $185,039 due in February. Wynn said the city plans to request that the council authorize the use of $125,000 in free cash to cover the remaining balance of that installment.

With a growing tax levy, Pittsfield property taxes also will be on the rise. How much more will you pay?

The real cost of the contract isn’t the physical cameras, but the software that is required to record hours of video filmed by the officers each shift, Wynn said.

“They’re providing us with the cameras because they want us to buy their data storage and retrieval solution,” Wynn said. “They’re not invested in the cameras — the cameras are solid state components.”

“They’re interested in securing us for a customer, because once we start generating public records on one of these systems, we’re pretty much married to that system,” he added.

The department is looking to enter into a five-year contract with whichever vendor is selected. Wynn said Axon has quoted the department with a $185,000 cost each year after the first two years’ payments. Wynn said he plans to ask the council for those funds in the department’s annual budget requests.

Several councilors questioned why the chief couldn’t find $185,000 within the department’s more than $10 annual million budget to fund the camera programs. The chief responded that the places he would traditionally look for that money within his budget had gone to increasing the staffing of additional officers and hiring new co-responders for the department.

“The figures that the finance managers are giving me I don’t anticipate — I mean we’ll keep an eye on it weekly, but it’s not looking good,” Wynn said.

"It's bittersweet," Chief Michael J. Wynn said. "I've come to peace with this decision, but it wasn't a decision I arrived at easily. I love being a cop and I love commanding our men and women in the Pittsfield Police Department."

Dalton police officers will begin use of body cameras this spring. And get paid extra for it

The Dalton Police Department will soon implement use of body cameras. Thanks to action from its union, officers will also receive a stipend starting in July worth about 2 percent of their salary, for the added responsibility of learning and using the technology.