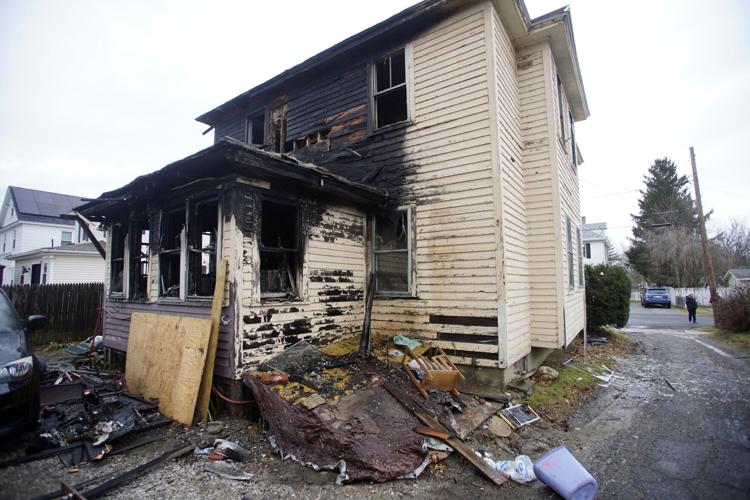 The Pittsfield Fire Department responded to 11 Congress St. overnight Tuesday, putting down a fire that destroyed a wood frame house and left one person injured.

Flames erupt early Tuesday from a home at 11 Congress St. in Pittsfield.

The scene at the 11 Congress St. fire in Pittsfield. 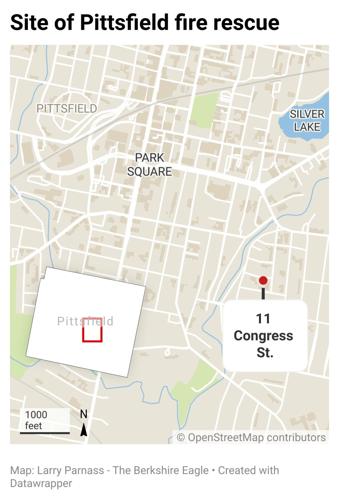 The Pittsfield Fire Department responded to 11 Congress St. overnight Tuesday, putting down a fire that destroyed a wood frame house and left one person injured.

The scene at the 11 Congress St. fire in Pittsfield.

PITTSFIELD — A Congress Street resident was pulled unconscious from his burning home early Tuesday morning and was flown out of the area to a regional medical center for specialized care.

The resident, Alan Hayford, 71, was rescued by Pittsfield firefighters from the home at 11 Congress St., where he has lived with his family for over 30 years.

Hayford was flown at 9 a.m. by the Lifeflight service to receive treatment in a hyperbaric chamber after extensive smoke inhalation.

Donald Hayford, Alan’s son, was in the house at the time of the fire. In an interview at the site of the fire, he recalled that just before 2 a.m. Tuesday morning, he began to smell “something awful.” He now thinks the odor was plastic burning.

“I saw a twinkle at the back door,” Donald Hayford said. “Then as soon as I opened the door, all the flames rushed in.”

Flames had engulfed the back of the 2½-story house, half a mile southeast of Park Square, spreading from a back porch and kitchen to the exterior siding.

William Hersey, a longtime next-door neighbor of the Hayfords, said he saw the flames start in the back, first extending about 10 to 20 feet from the house, then billowing out to about 50 feet within a minute.

The fire call was reported to the Pittsfield Fire Department at 1:41 a.m. While en route, firefighters were notified that someone might be trapped inside the house.

Hayford rushed upstairs to start warning other people in the house, including his mother, daughter, sister and father. He spoke with his father briefly to try to get him out of the bedroom, but then lost track of him by the time he himself got out of the house. After they realized he was still inside, the family asked firefighters to get him out.

When a crew arrived, flames had broken out at the rear of the building, according to the department. The home’s kitchen and a three-season porch were found to be burning and the department called for an additional crew.

After entering and searching, members of two crews found Alan Hayford unresponsive on the home’s second floor. Responders mounted ladders to get Hayford out through his bedroom window to move him to safety.

As of 5:30 a.m., Alan Hayford was being treated at Berkshire Medical Center. No firefighters were injured, according to Deputy Chief Daniel Garner.

“I saw a twinkle at the back door. Then as soon as I opened the door, all the flames rushed in.”

“The rescued victim is still alive and being treated at BMC,” Garner said in a media statement at 5:30 a.m. Tuesday. “I cannot stress enough the tremendous job well done by PFD at this fire.”

Hersey said firefighters were able to get the flames knocked down quickly and crews remained on the street until about 6 a.m. He didn’t think there was enough structural damage to the house to knock it down, but smoke and water had taken its toll on the interior.

The cause of the fire is not yet known. The family is trying to figure out what to do with the house. The home’s main caretaker is the biggest priority right now.

“He was the main one to handle all that stuff,” Donald Hayford said of his father.

A Pownal, Vt., couple lost nearly everything in a fire. Then the community rallied behind them

Jack Dempsey was sleeping on the couch the morning of Dec. 1 when he was awakened by the hissing sound from an air line leading to an oxygen tank. He opened his eyes to find that the couch was on fire.