Jim McGrath, the city’s park, open space and natural resource program manager, told the commission following the vote the city will “move very quickly” on the project. Once Mayor Linda Tyer confirms that ARPA money will be used for the project, McGrath said he will contact Berkshire Design Group in Northampton to design the project and present layout and construction plans to the commission.

“I’d really like to see these courts under construction as soon as the ground thaws in the spring of 2023,” McGrath said.

The idea that the city would use some of its coronavirus relief dollars for a pickleball project first came up during budget talks this summer.

In Tyer’s presentation of her proposed fiscal year 2023 budget, she presented the City Council with a capital improvement plan. The plan noted that Tyer planned to allocate $500,000 of the city’s $40.6 million in ARPA money to the project.

McGrath said at a Parks Commission meeting this week that Tyer approached him in “early 2022” to start looking into a potential site for the growing popular sport. 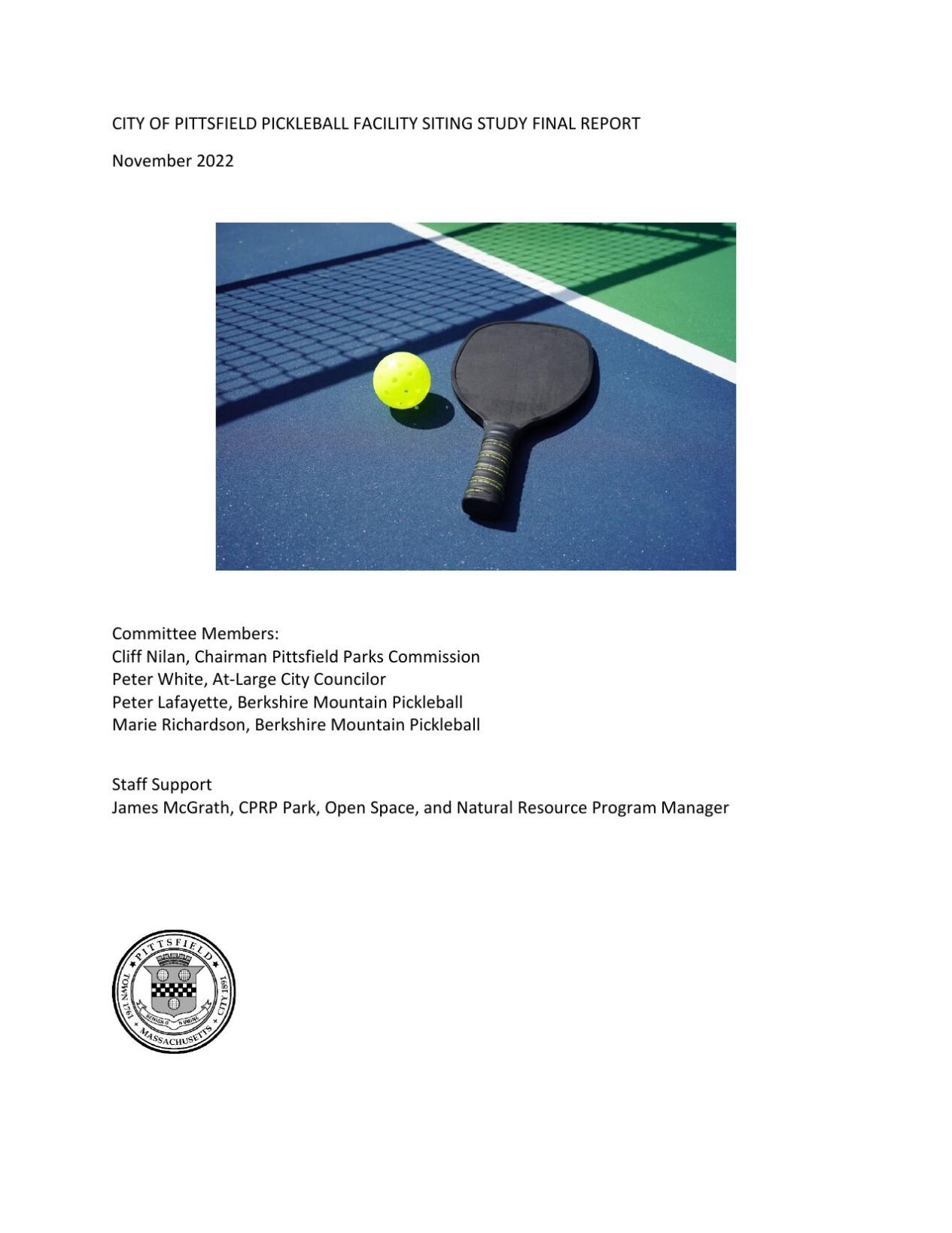 McGrath served as the staff support for a committee made up of Parks Commission Chair Cliff Nilan, City Councilor Pete White and Berkshire Mountain Pickleball representatives Marie Richardson and Peter Lafayette. The group spent part of the summer reviewing potential locations for the pickleball courts.

The committee considered 49 sites in city-owned parks and general land. In a report to the Parks Commission, the panel wrote that members paid particular attention to the surrounding neighborhoods, potential “harmony” with existing park facilities, availability of parking and environmental factors at each site.

From these locations, six spots rose to the top of the list. Lebanon Park, Lakewood Park, Burbank Park, Marchisio Park and the East Street Softball Complex were all given consideration before the committee settled on Springside Park.

McGrath said Springside offered existing infrastructure that could be used for the courts — noting the presence of a concession stand, restrooms and a curb cut off of Benedict Road. The site the city is pursuing is a flat stretch of grass, to the west of the water tower, among the existing fields at the Doyle Softball Complex.

Pickleball, continues to grow around the world, especially in the Berkshires

McGrath said the committee believes a parking lot — with 16 to 18 spaces — could be constructed nearby and the courts would easily connect to a handicap-accessible restroom.

“I think this is just a natural extension of the development of quality recreation facilities here in our city,” McGrath said.

In 2019, when city officials tried a multitude of funding options to cover the design and construction of pickleball courts at another site in the park, they were met with strong opposition from residents. Critics said the project violated an existing master plan for the area and didn’t fit with the kind of investment they were looking for at the park.

At the time, the Springside Park Conservancy voted unanimously in opposition of the project. In a letter to the Community Preservation Committee, the conservancy members said the pickleball project was “fundamentally inconsistent” with the spirit and specific guidelines within the established master plan for the park.

Bernie Mac, a member of the conservancy, on Tuesday night told the Parks Commission that the opinion of the group had changed. Mac said McGrath had walked the proposed site with the group and “it looked like a good spot for pickleball.”

Mac said the group’s main objection to the proposal last go-around was over concerns that money that could be used to fund other needs in the park would be used to create the pickleball courts. He said that’s no longer a concern since the city would use ARPA funds.

McGrath said that the pickleball project would be considered a “public health” project. ARPA allows municipalities to use the federal money to “respond to the far-reaching public health and negative economic impacts of the pandemic, by supporting the health of communities .…”

PITTSFIELD — Opponents of a proposed pickleball project at Springside Park have scored what appears to be a decisive win.The City Council on Tuesday declined to allocate Community Preservation …