PITTSFIELD — The United Educators of Pittsfield is criticizing the School Committee’s decision to approve a one-year commitment to a virtual academy, and with it is suspending talks over a new contract.

“As we emerge from the crisis created by the pandemic, the School Committee is creating an unnecessary crisis in our schools by not settling a fair contract with its educators,” said UEP President Melissa Campbell in a statement. “The biggest threat [to] the long-term future of our public schools is not the lack of a virtual academy, it is the lack of contract that will allow Pittsfield to attract and retain quality educators.”

The UEP — which represents more than 500 Pittsfield Public Schools teachers, guidance counselors and specialists — had been negotiating a successor contract with the district since April, Campbell said, though she said the UEP had asked to open the talks in February. 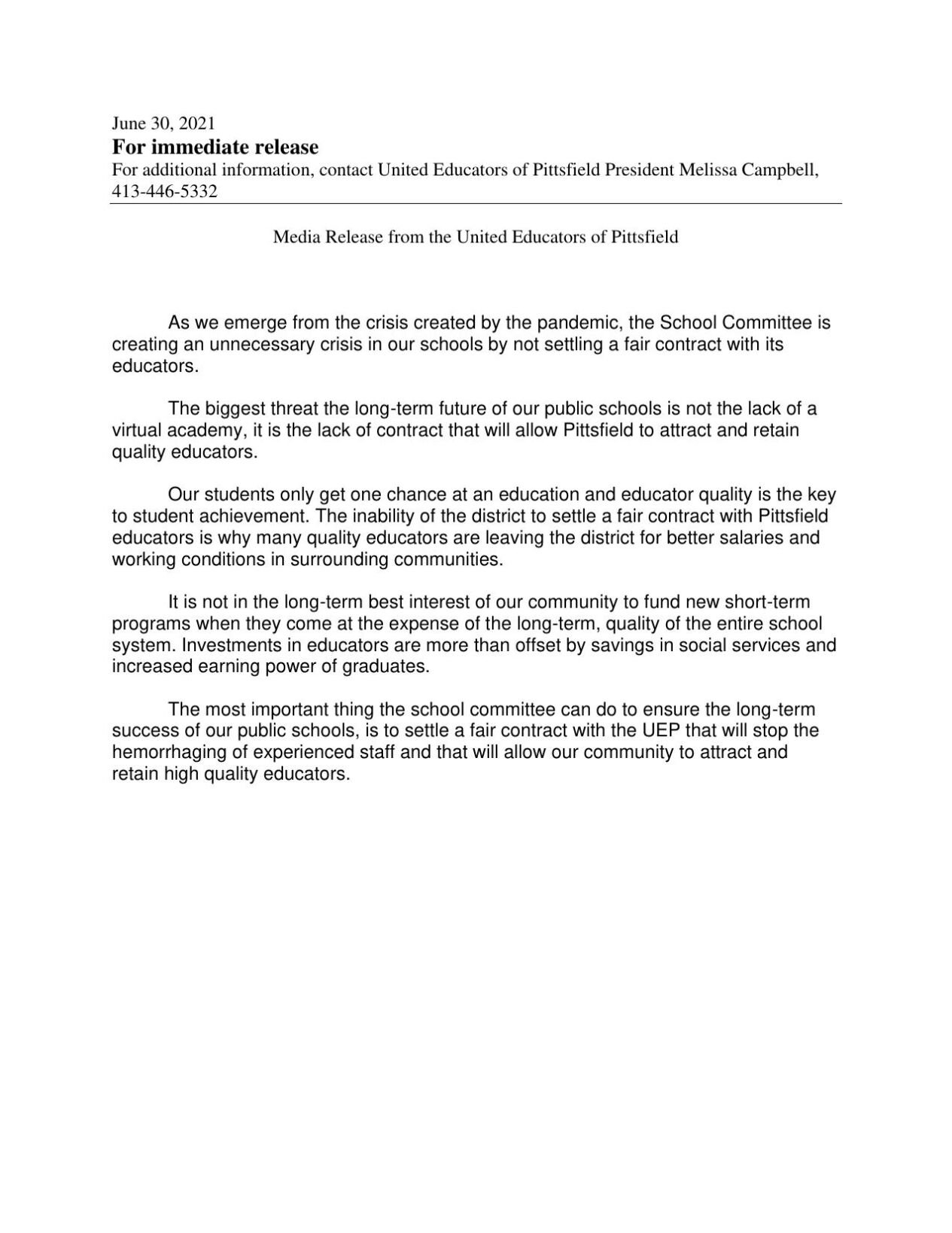 She said that despite the timeline being tighter than what the UEP requested, the district and the union were “pretty close” to reaching an agreement before School Committee voted June 23 to extend the virtual academy for one more year, at a cost of $3 million that will be funded through one-time federal aid to the district.

Campbell said the UEP’s counteroffer was contingent upon there not being a virtual academy next year, as she said district representatives had previously told union officials the academy was “not in the budget.” That, according to Campbell, led UEP to suspend contract talks.

“Quality educators” are departing the city school district to work in other districts “for better salaries and working conditions,” said Campbell. In her statement, she blamed it on the district’s “inability to settle a fair contract” with educators.

The district’s most recent proposal to the union would leave Pittsfield educators earning comparatively lower salaries than many surrounding districts, according to Campbell. She said it is not in the district’s best interest long term to fund short-term programs at the expense “of the long-term, quality of the entire school system.”

The money spent operating the virtual school, a stand-alone, online public school which officials said would have the capacity to serve about 324 students, would be “better spent somewhere else. Or, if we’re going to do this [the virtual school], we need to take care of the teachers.”

“Retaining teachers is what’s best for students. We have schools in turnaround, but yet we’re not putting in our best efforts to retain quality teachers,” she told The Eagle. “How are you saying you won’t be able to take care of the teachers — who you won’t be able to keep — but yet you open a new school?”