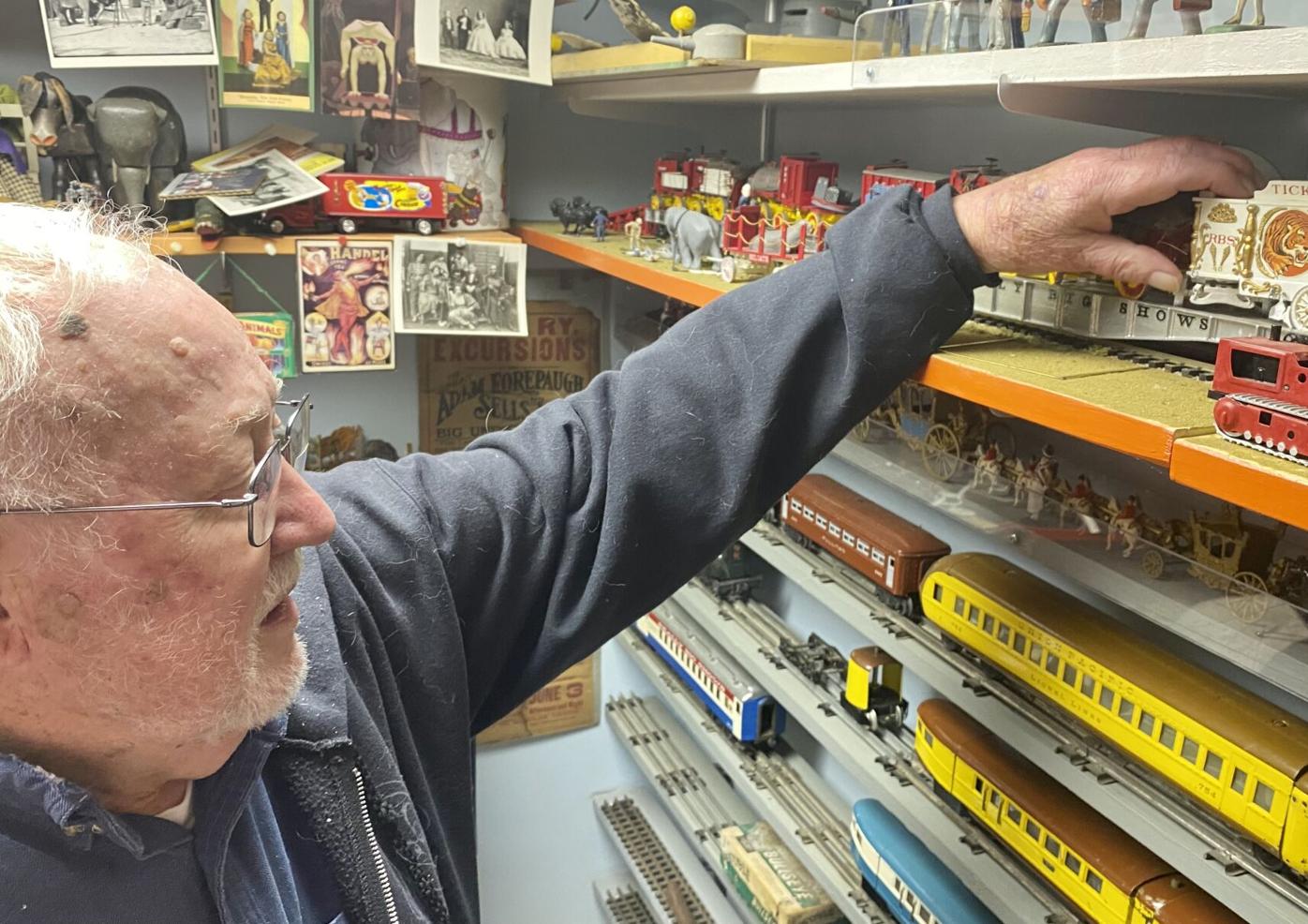 Jack Trowill, of Pittsfield, gives a private tour of his collection of circus model train cars and wagons he has assembled and painted that date back to his boyhood in the 1940s. 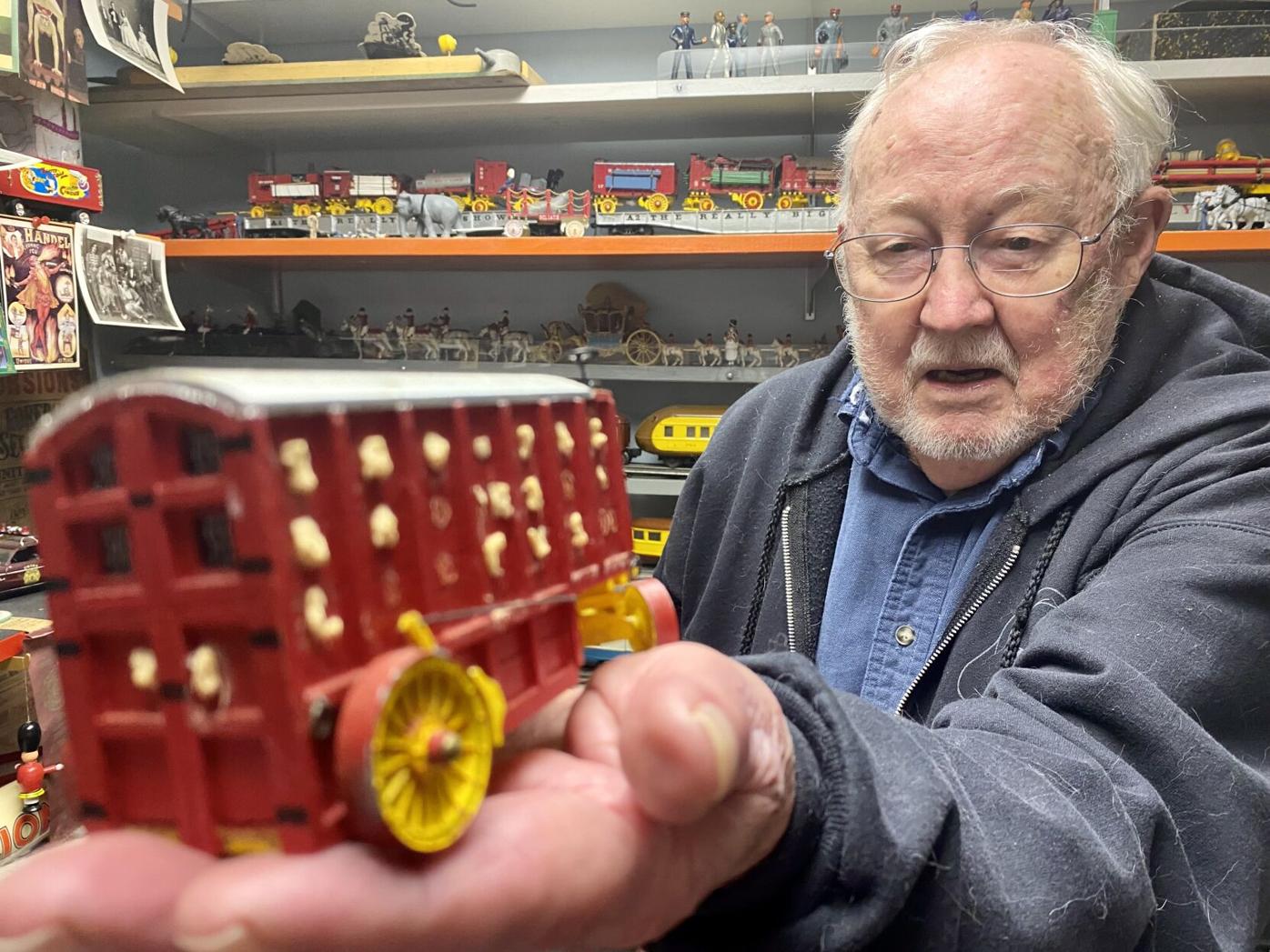 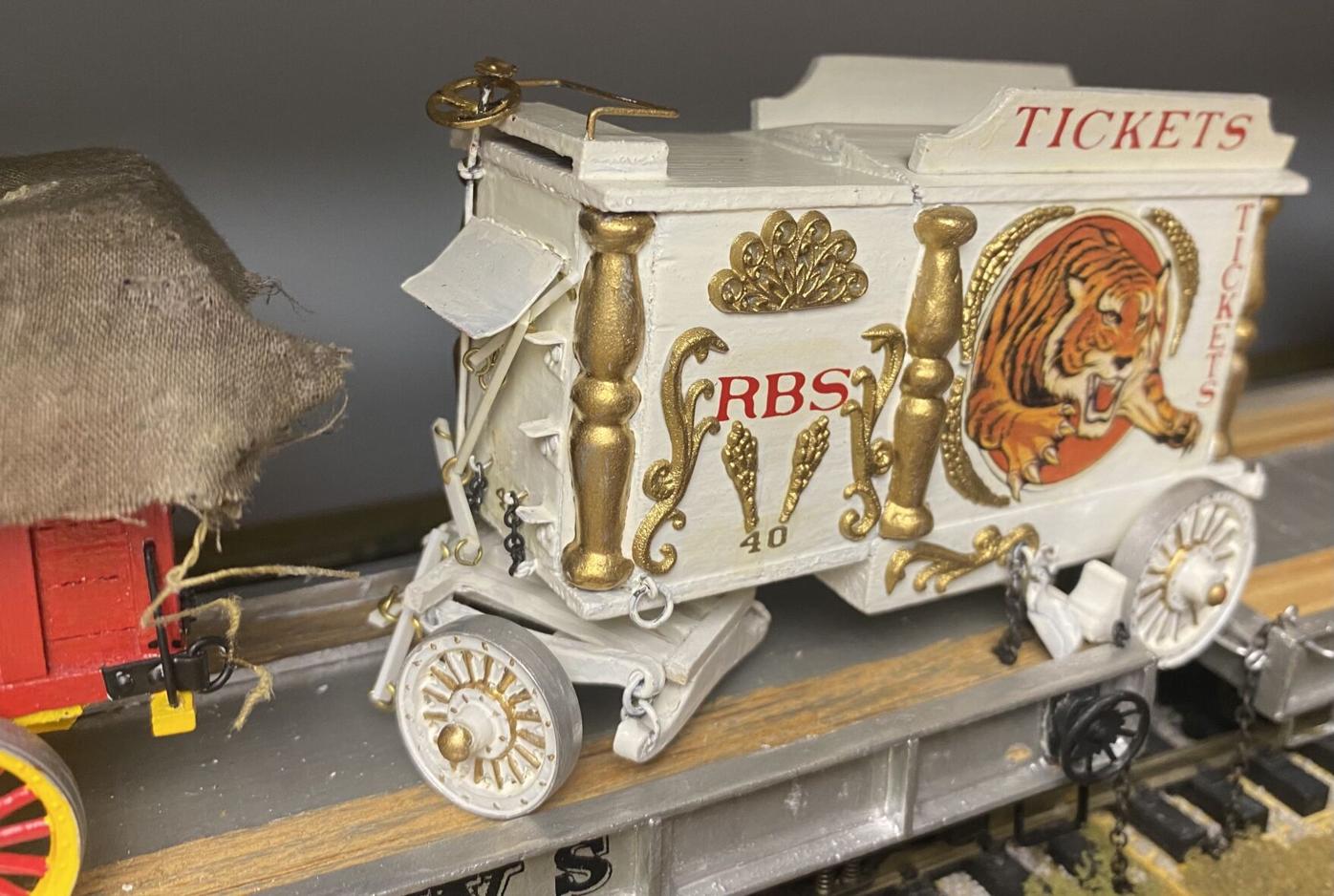 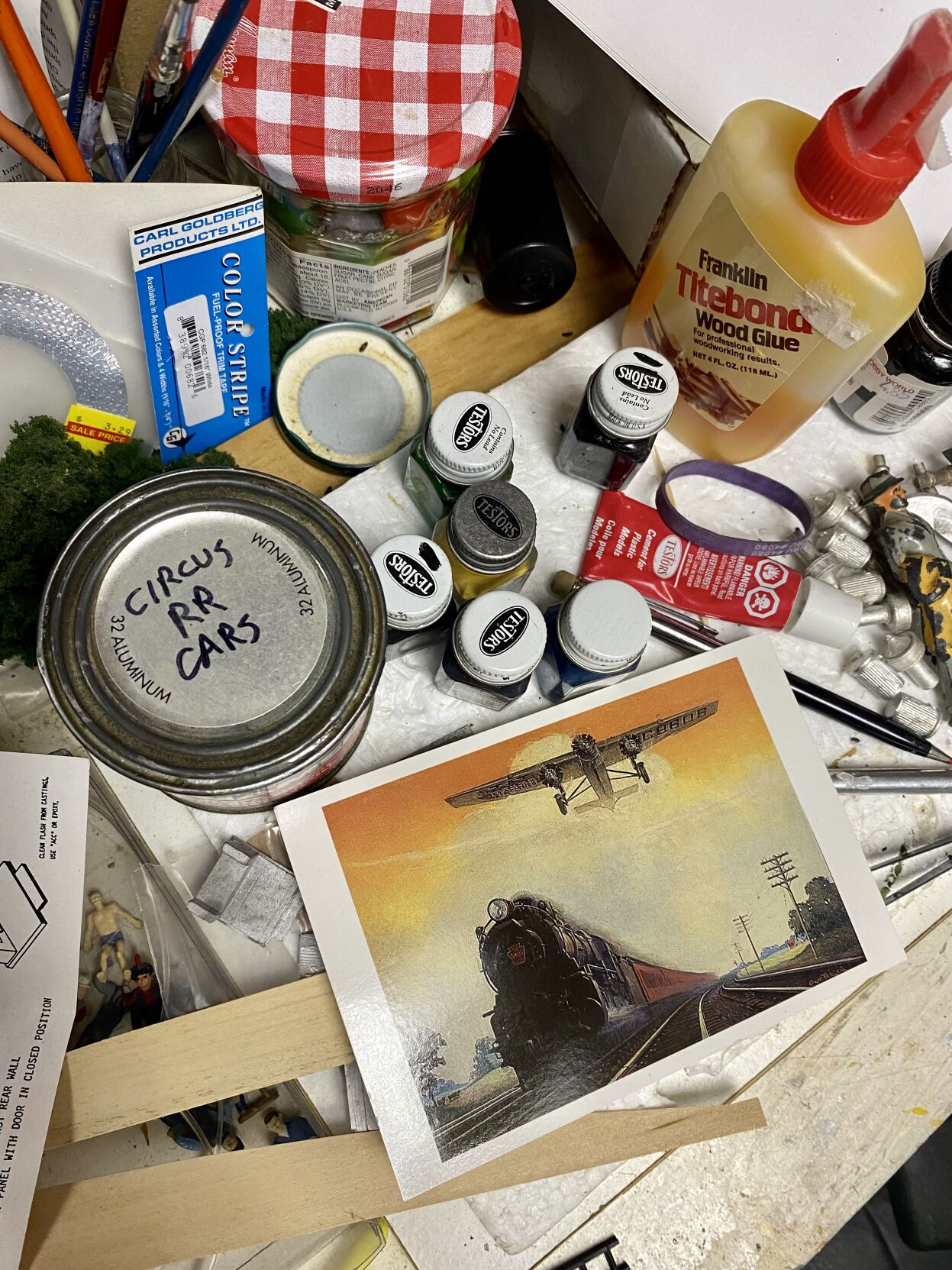 Jack Trowill's workbench where, for decades, he has assembled and painted miniature circus worlds. 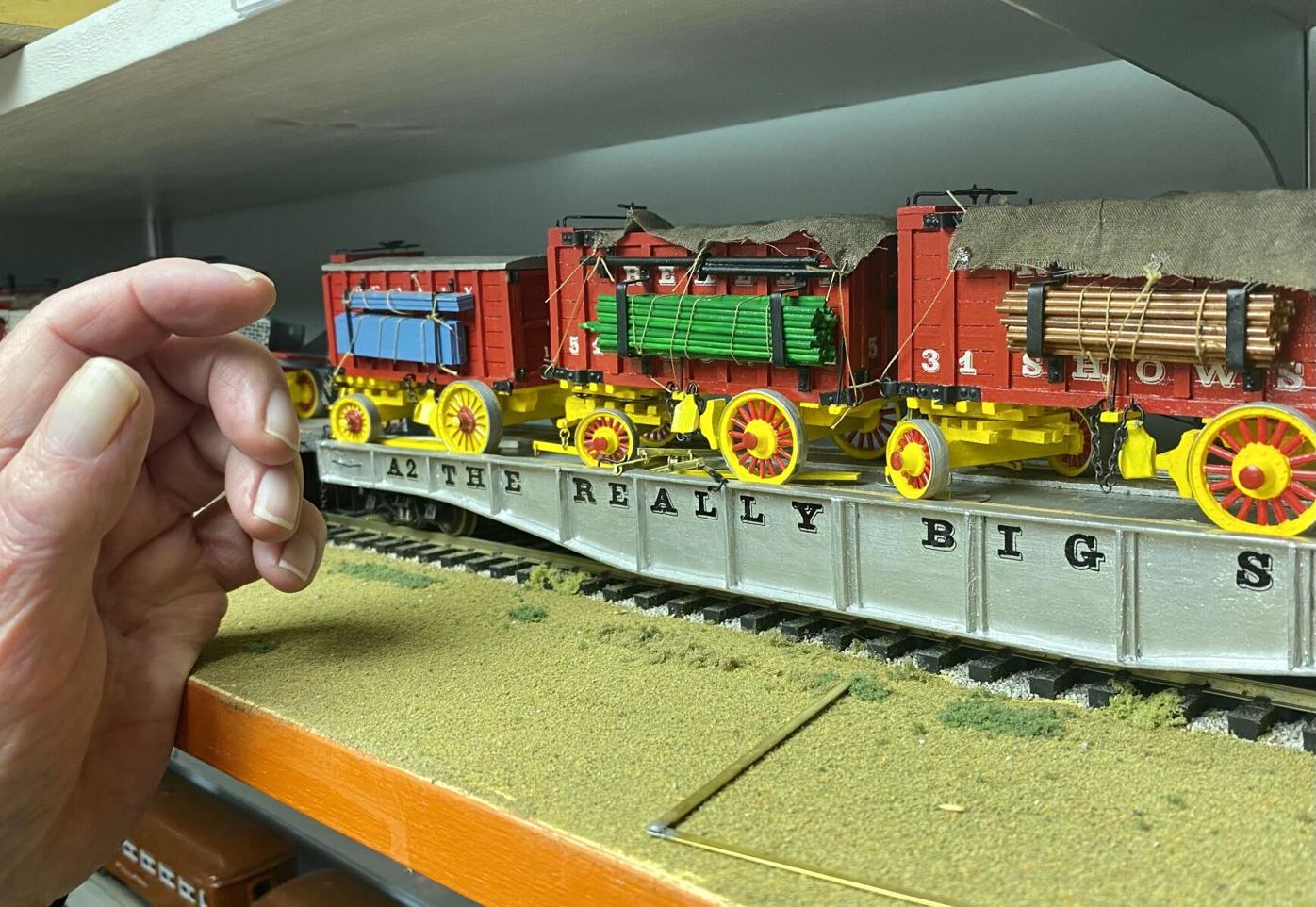 Among Jack Trowill's circus wagons are these, which replicate the vintage "pole wagons" used to haul the big top and all its rigging.

Jack Trowill, of Pittsfield, gives a private tour of his collection of circus model train cars and wagons he has assembled and painted that date back to his boyhood in the 1940s.

Jack Trowill's workbench where, for decades, he has assembled and painted miniature circus worlds.

Among Jack Trowill's circus wagons are these, which replicate the vintage "pole wagons" used to haul the big top and all its rigging.

PITTSFIELD — Just checking in on Jack Trowill, the man who, for decades, would travel over hill and dale with his projector, his slides, his notes and his memories. He’d be at the beck and call of any and every civic group in the county — and beyond — whose members hankered to hear about the good old days.

Train history in the Berkshires? Yeah, he’d be your guy. Circuses and trains in 20th century United States? Oh, most definitely your guy.

He’s now 87. First things first: “Considering my age, with rheumatoid arthritis, I’m doing OK,” he says at his home on Sherwood Drive. His wife, Beverly, died in 2013, and since then he’s spent more time watching television than he’d care to admit. But he’s OK.

Old friends still call. His son lives in Lenox. His daughter will be visiting soon from Delaware with some loaves of scrapple, that mush of pork scraps and cornmeal that he loves so much even though he knows it’s kind of gross.

And down in the cellar, he has recently plowed a path back to the past. There’s room for two, and he leads the way.

Due to the arthritis, there will be rest stops along the way. The first, in his front hallway.

Trowill, a retired General Electric engineer and a revered volunteer with the Berkshire Scenic Railway Museum for 36 years, comes from a long line of hard-working scrapple eaters from Delaware. His father and uncle were trainmen. His grandfather, too.

When circus trains pulled into the railyard of his hometown of Wilmington, Del., bearing the dangers, adventure and romance of the world, Trowill had front-row viewing of what he considered the best part of it all: the early morning unloading of the rail cars.

The second rest stop along the way to his cellar is the living room, beside a shelf filled with books about circus history.

Born in 1934, Trowill says one of his first memories is of seeing Ringling Brothers and Barnum & Bailey Circus in 1937. He still has the program. It’s upstairs.

“Great acts with the clowns fighting a burning building — inside the tent!” he recalls. “I saw this show many times in the 30s, 40s, and 50s, including the last year, 1956. I had to watch the tent come down for the last time in Delaware.”

He remembers the strong men, the pretty women, the wild animals, the wagons, the big top, the ping-ping-ping of steel stakes being pounded into the earth, the here-today, gone-tomorrow magic, mechanics and absurdity of it all.

The Flying Wallendas, those high-wire walkers famous for their seven-person pyramid: Do you know about them?

Or those human cannonballs, the Zacchini brothers? Yes, he saw them, in person.

The third rest stop: at the top of the stairs leading down to the cellar.

Trowill hasn’t been back to the gym since the pandemic began, and he says his body has stiffened up as a result.

“Getting up and down the stairs is awful,” he says.

Many of his old pals are, like him, model train buffs, interested in professional railroading on the small scale. Unlike him, many of his friends — particularly those who have downsized into smaller houses — have since sold their model train collections.

Yes, Trowill misses how he and his pals would frequently get together. They’d complain about the Berkshires’ lack of local passenger rail service. They’d praise one another on their model train layouts.

If you are a model train buff who has sold off your collection, chances are good you’re wanting to visit Trowill and his Lionel trains that date back to his boyhood.

Here’s one of the delightful things that has happened in Trowill’s life: In the mid-1940s, the company Wardie-Jay introduced a line of vintage circus model kits built to a scale compatible with his Lionel trains. What that meant was that Trowill’s toy trains could become circus trains, like those that pulled into Wilmington.

All he had to do was put in thousands of hours assembling, painting and arranging the many parts that make up a circus town, including rail cars, wagons, canvas big tops, high-wire acts, menageries, everything. That’s exactly what he’s been doing, on and off, since the 1940s. For reference, he has relied on those circus books he’s collected over the years.

“There’s just not the interest in these things anymore,” he says.

Did you know that “The Greatest Show on Earth,” Ringling Brothers and Barnum & Bailey Circus, had in its heyday a daily grocery list that, for starters, included 3,000 pounds of potatoes and 500 quarts of milk for the humans and 10 crates of pears and 12,500 pounds of hay for the animals?

Local Lions Club members, Kiwanis Club members and historical society members have learned as much over the years, thanks to Trowill.

He has written many articles for various publications. He has started many articles that he hasn’t yet finished. One is on the daily milk train that ran from the Berkshires down to Grand Central Station in New York City.

“I’m going to write an article about all my unfinished articles,” he says.

He holds the railings and cautiously climbs down the stairs.

“For a time, there were 20 or 30 circuses big enough to have railroad trains,” he says along the way.

He’s made it down to his cellar. It’s a circus down there, in miniature.

He leads the way along the path he’s carved out, pointing out the beautiful big top pole wagons with working brakes, the rail cars, the colorful circus town set up around an old-style rail yard. On and on, detail upon overwhelming detail.

“One of the biggest disappointments is I had cataract surgery a couple of years ago,” Trowill says. “I just can’t see well enough to do the fine work anymore. I have all these unbuilt kits I want to work on.”

He can still see well enough to pull out a giraffe wagon he built and painted decades ago. He decorated the wagon using glued-on letters he gathered from cans of Campbell’s Alphabet Soup.

Eventually, it’s time for him to flick off his cellar lights. This train has to keep moving.

He climbs the stairs back to the first floor, where a second passion of his also remains intact. Trowill has a collection of more than 1,000 jazz records.

He loves jazz. Do you love jazz?

“Ever hear of Norman Grantz?” he asks.

Felix Carroll can be reached at