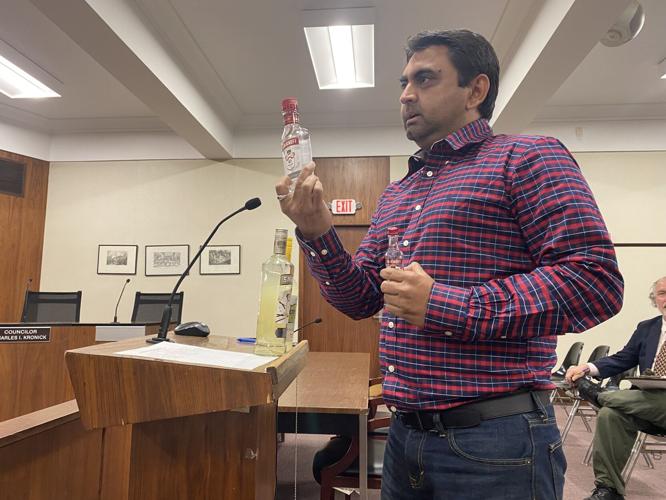 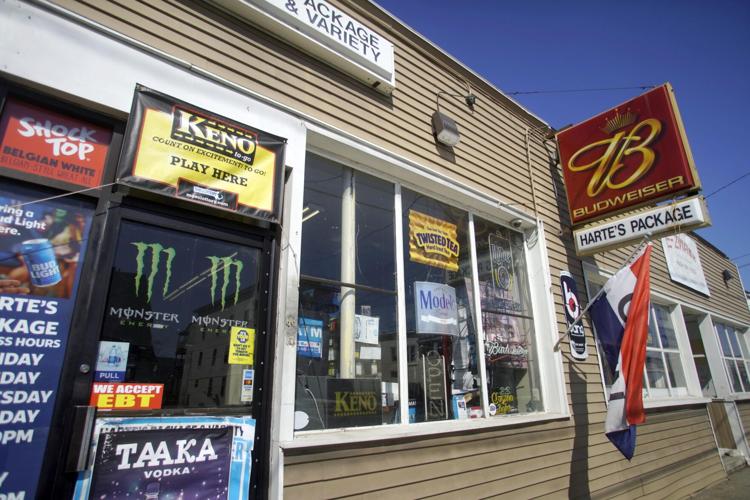 Pinal Shah told city councilors that sales of nip bottles make up 90 percent of business at Harte’s Package on Dalton Avenue in Pittsfield. 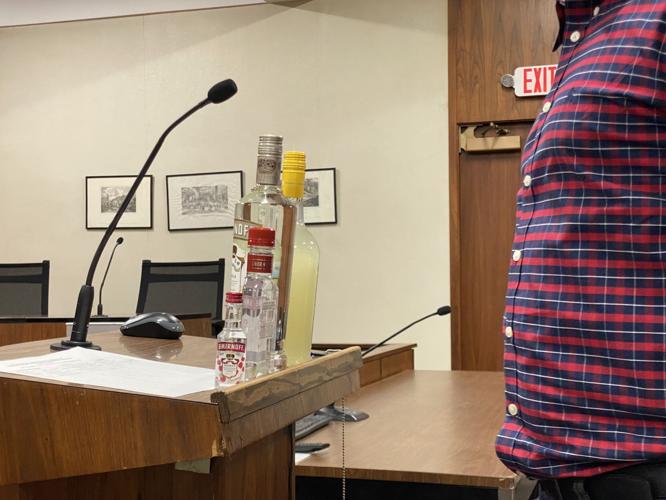 Jigar Sinroza, owner of Berkshire Wine and Liquor, lines up the bottles that make up the bulk of his and other package store owners businesses along the City Hall podium last Tuesday. Sinroza said customers go specifically for the nips size (pictured in the foreground) and won't stick around for the next size up.

PITTSFIELD — Local package store owners say that a proposed ban on the sale of small liquor bottles — known as nips — would unfairly target their businesses by going after their most popular products under the guise of combating pollution.

“If you take nips away, you’re still going to have candy and chip wrappers, scratch tickets, cigarettes and coffee cups along our beaches and roads,” said Pinal J. Shah, owner of Harte’s Package Store, during a recent city meeting.

“A ban on nips would be picking winners and losers in a time when our community is beginning to get back to normal,” he added.

After an ordinance and rules subcommittee meeting last week, at least four city councilors conceded there might be a better way to combat pollution across the city and voted not to recommend the ban. Instead, it suggested that the City Council write Pittsfield’s state delegation to encourage the creation of a deposit program for nips similar to carbonated beverages.

The issue will come to a head at 6 p.m. Tuesday as the council weighs whether to accept the subcommittee’s recommendation or ban the sale of the miniature bottles, as have other communities across the state, including Newton, Chelsea, Wareham, Falmouth and Mashpee.

Will Pittsfield say 'no more' to nips? A new petition to the City Council will find out

In Pittsfield, you can find nip bottles in flower beds, culverts and scattered along roads. A petition hopes to wipe Pittsfield clean of discarded nip bottles.

Local attorney Rinaldo Del Gallo submitted a petition to the City Council in April proposing a ban on the sale of nip bottles. Talking with the ordinance and rules subcommittee last week, Del Gallo called the nips scattered across the city “a horrible mess” and said “these things create a tremendous amount of litter.”

To illustrate just how bad things are in Berkshire County in general, Del Gallo referenced recent cleanup efforts in Lee during the Greener Gateway Cleanup, during which volunteers picked up nearly 1,000 such bottles.

Word of Del Gallo’s petition kicked a small group of package store owners into high gear. Business owners who would normally be in tough competition for local customers reached out to one another to compare notes.

The owners contacted their distributers Martignetti Cos. and Horizon Beverage for sales data to give councilors a better picture of just how big a dent a nip ban would leave in their revenue.

At Berkshire Wine and Liquor, about 59 percent of the 2,207 cases of Martignetti alcohol the store sells in a typical year are cases of nips. In 2021, the store sold $107,901 in nips from the distributer.

“Are we ready to lose that much business out of Pittsfield if we just ban nips?” asked Jigar Sinroza, the owner of Berkshire Wine and Liquor and George’s Liquor, during the recent subcommittee meeting. “That’s the No. 1 question.”

Customers are “going to go to Dalton, Cheshire, Lannesborough ... you name it, they all have it,” Sinroza said. “They’re going to buy over there and then probably bring it to Pittsfield, but they’re not going to go back to that town to throw it out.”

Owners said if the city wants cleaner public spaces, they’re willing to do their part. Several package stores have set out collection bins for used nip bottles and owners have hung up signs from the Pick Up Massachusetts campaign to educate customers about nips recycling.

“As small-business owners, we’re willing to work together with the town if they have a solution to this littering problem — not just nips,” Kayur Shah, the owner of Chico’s Wine and Sprits, told the Eagle on Monday. “We can educate our way and if the town could work with us that’d be great.

Paul Hashim is the third generation to run Hashim’s Package Store. His family is proud to have maintained the businesses with one of the original liquor licenses issued by the state at the end of Prohibition.

Hashim said he understands what some councilors had said was both a pollution and public messaging concern.

Councilor Anthony Maffuccio during the meeting, rattled off the list of places nips have been found: parks, school grounds and neighborhoods

“There is a significant difference — at least to my eye — in seeing a lottery ticket on the ground versus a nip,” Councilor Dina Lampiasi said. “The concentration of them and the location that we’re seeing them makes me very uncomfortable.”

Hashim agreed that there’s a difference between a candy wrapper on the ground and a nip. He told the Eagle Monday that he’s considering having his staff join local cleanup efforts at Springside Park and other parks around the city in a show of good faith and to help combat the problem.

Going into the subcommittee meeting he said he was concerned the councilors “wouldn’t be looking at all of the repercussions to the decision to ban [nips].”

Mitchell Chapman: What to do about nip bottles in Pittsfield?

Pittsfield has found itself in a tough situation involving nip alcohol bottles: How do they rein in their litter without adversely affecting s…