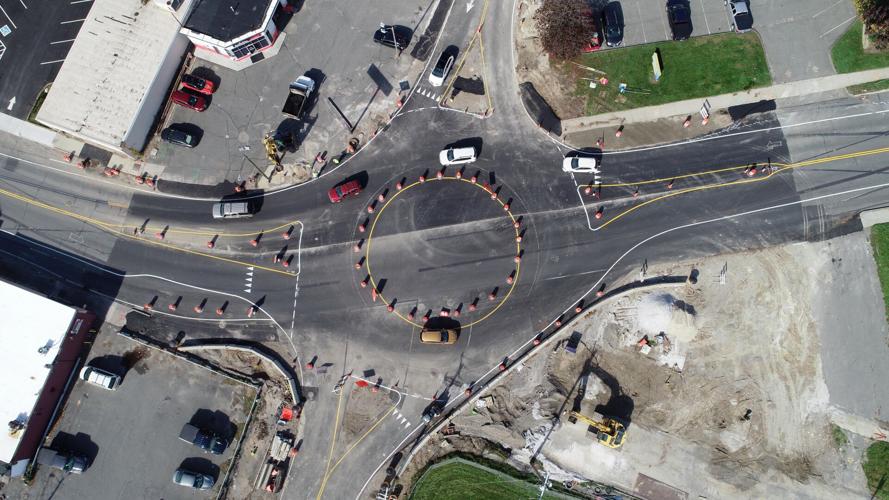 While work continues on the intersection of Tyler Street, Dalton Ave. and Woodlawn Ave., traffic is following the roundabout pattern. North is at the top of the frame. 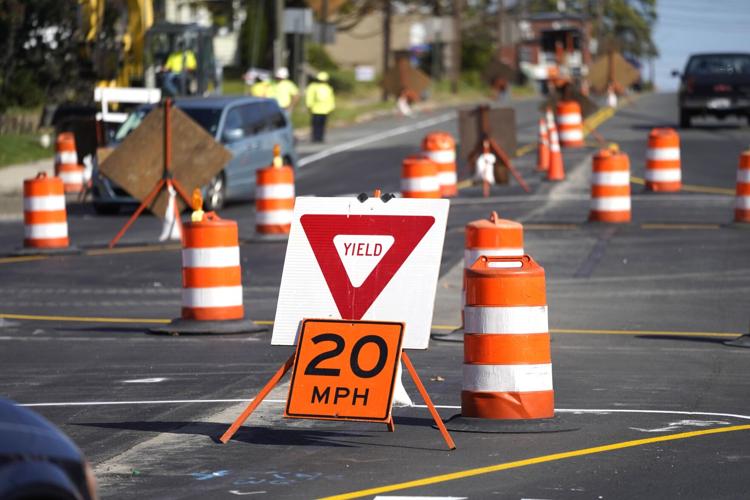 While work continues on the intersection of Tyler Street, Dalton Ave. and Woodlawn Ave., traffic is following the roundabout pattern.

PITTSFIELD — Within months, construction is scheduled to begin on a major project to redesign a stretch of Tyler Street and replace the five-w…

Path to a Pittsfield roundabout: Six takeaways on the circular logic of a traffic management tool

PITTSFIELD — Odds are, when the question of a proposed Pittsfield roundabout opens to public comment Wednesday evening, someone is going to ri…

PITTSFIELD — The intersection of Tyler Street, Woodlawn Avenue and Dalton Avenue is home to the city’s first roundabout, which opened Tuesday night. Drivers through the intersection are now pumping their brakes — something the city’s Commissioner of Public Utilities Ricardo Morales already counts as a success.

“I think right now it’s successful in terms of accommodating traffic and keeping it at safer speeds,” Morales said. “We’ve made it a safer street, or safer intersection for that matter.”

Morales said safety was always the impetus for the traffic change. He said city staff “were clocking people at 40, 45, 50 miles per hour” when cars crossing the Woodlawn Avenue bridge next to the old General Electric plant were deposited in the middle of Tyler Street and Dalton Avenue with nothing more than a stop sign.

Now the goal is to keep the majority of traffic — about 85 percent of drivers — driving at or below 20 miles per hour.

“The goal is to have people negotiate this intersection at no more than 20 miles per hour and when you have that — even if there’s confusion — it’s just safe because you have lower speeds,” Morales said.

Kurtis Andrews had some choice words for the construction process, but said that from his vantage point at his desk at Safelite AutoGlass there was really no safer alternative for the city than a roundabout.

Andrews said he remembers the ever-present sound of tires screeching as people narrowly avoided crashes in the old traffic design. He said he’s heard some tires since the roundabout opened, but he chalks that up the temporary traffic markers and a general learning curve among local drivers.

“A roundabout seems like the only logical explanation because there is so many entrances [to surrounding businesses],” Andrews said. “But I think the execution could have been a little smoother — but they’re not done yet so I don’t know how it’s going end up.”

For now, the roundabout is mostly a collection of orange traffic barrels marking where a raised circular median will be built. There’s a bevy of yield signs and painted lines marking where crosswalks and sidewalks will be installed.

Morales said that when work is completed the roundabout will have mountable curbs to allow larger trucks to navigate the curbs, the median will be filled with landscaping and there will be new sidewalk segments that connect the previously disconnected segments of Tyler and Dalton.

And while roundabouts have been the focus of a lot of traffic attention lately, this is not your grandma’s roundabout.

“This is what’s called a modern roundabout and the design standards are set for a design that makes people drive at 20 miles per hour,” Morales said. “When someone thinks about a roundabout they’re thinking about...this massive circle that confuses anyone that goes in it.

“Like no, this is very simple. Drive slow and you’ll get through it.”

That was one part of Traylee Harrington’s advice to drivers as she looked out over the counter of nearby Pizza Works on Wednesday afternoon.

“Drive slow, pay attention, yield,” Harrington said. “And take the back roads as much as possible. I know that I wouldn’t be driving that if I drove.”

Harrington walks to her job at Pizza Works. She said that above all else, the roundabout and construction process has been “annoying” as a pedestrian.

“I have to cross here and then here and then there,” Harrington said, mentally walking through the roundabout’s median crossings. She said customers have been more irritable as they try to figure out parking and the easiest way to access the pizza shop.

“I think it’s a waste of money,” Harrington said. “The original setup was better — put in a couple traffic lights and call it a day.”

Morales said the original project was budgeted for $1.2 million with $60,000 set aside to acquire easements on the Safelite property and a residential property on the east side of Woodlawn to add in new sidewalk segments. The roundabout has opened up on schedule despite some initial bumps in the road.

Morales said when crews began to dig up the intersection they found contaminated soil from the GE site and old rail ties from Pittsfield’s long-gone trolley line. Excessive rain in July put another halt on work, but Morales said the construction crews were able to “get creative” and finish the roundabout almost entirely over the last three months.

And of course, there’s residents’ driving habits, as well. As Morales stood next to the roundabout on Wednesday afternoon, surveying as maintenance trucks, bicyclists and large shipping semis slowly made their way through the once dangerous intersection without issue, a Pittsfield patrol vehicle flicked on its lights and took a left turn from Tyler Street to Woodlawn Avenue against the flow of traffic.

While work continues on the intersection of Tyler Street, Dalton Ave. and Woodlawn Ave., traffic is following the roundabout pattern. North is…

PITTSFIELD — As the chapter closes on our coronavirus winter, city leaders are opening a new page cautioning of an uptick in positive COVID-19…

Tyler Street's pandemic: What happens when hard times pile on a distressed area?

PITTSFIELD — Rich Herbert came out the back door at the Dairy Cone armed with a power drill. That’s a sign of spring on Tyler Street.

Is the Tyler Street roundabout too small? A Pittsfield official says it's right-sized for safe streets

The city’s first modern roundabout, which links Tyler Street and Woodlawn and Dalton avenues in a small circle, opened to traffic eight months ago. While drivers slowly creep through the circle each day, residents still have questions about its design.