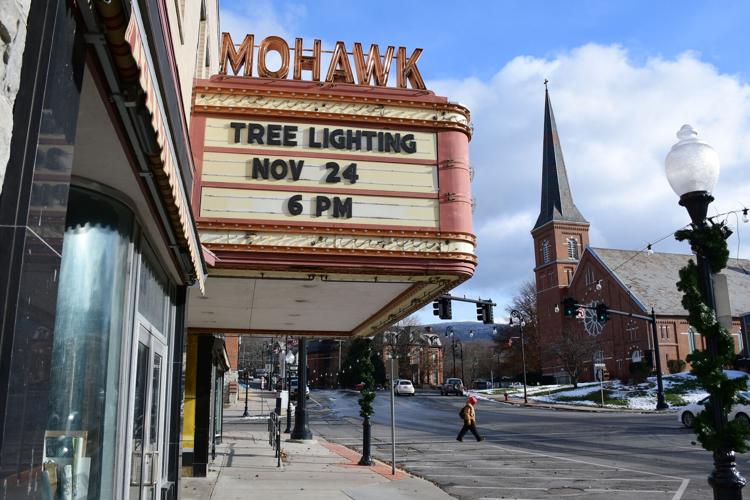 The Mohawk Theater in downtown North Adams was the topic of a meeting Wednesday of the City Council, a developer with plans for the historic site, and city residents. 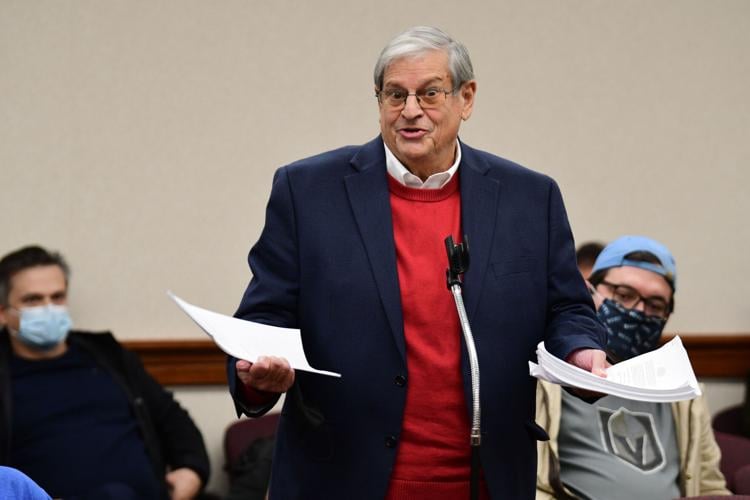 State Rep. John Barrett III voices concerns to the council, and to Veselko Buntic, about the rush to push ahead with plans for the Mohawk before the end of the year,. 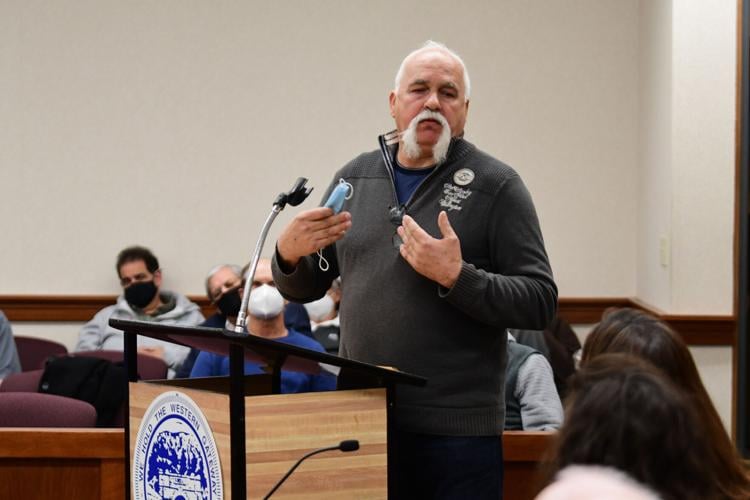 Buntic answers questions about his plans for the Mohawk. 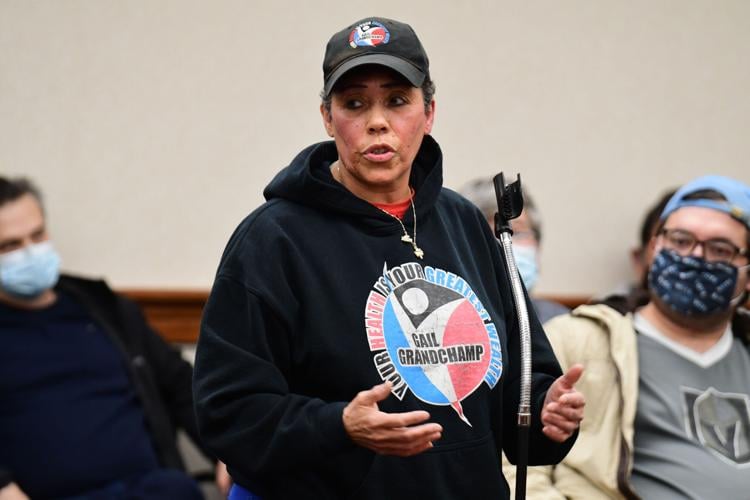 Gail Grandchamp voices her concerns to the council and Buntic about the other properties he owns that have yet to be developed. 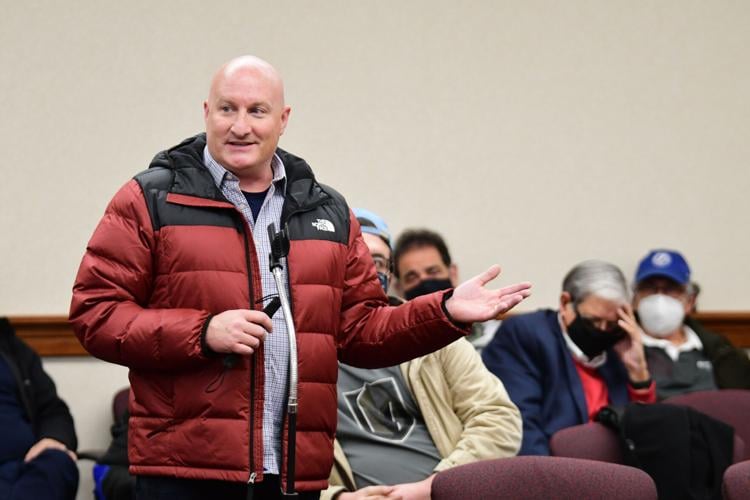 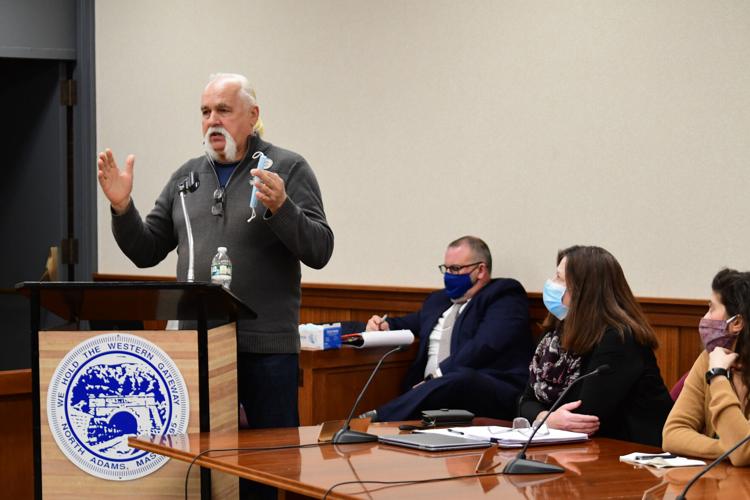 Buntic answers questions about his plans for the theater.

The Mohawk Theater in downtown North Adams was the topic of a meeting Wednesday of the City Council, a developer with plans for the historic site, and city residents.

State Rep. John Barrett III voices concerns to the council, and to Veselko Buntic, about the rush to push ahead with plans for the Mohawk before the end of the year,.

Buntic answers questions about his plans for the Mohawk.

Gail Grandchamp voices her concerns to the council and Buntic about the other properties he owns that have yet to be developed.

Buntic answers questions about his plans for the theater.

NORTH ADAMS — From finances to a timeline, City Council members and residents peppered the developer behind the proposed Mohawk Theater sale with questions Wednesday night about the project, at a special meeting dedicated specifically to the topic.

Why a special meeting?: When the city put out a recent request for proposals for the theater, Veselko Buntic, of Dowlin Building LLC, submitted the sole response, to purchase it for $21,000 and turn it into a multipurpose event and performance space. Last month, Mayor Tom Bernard told the council he planned to sell the building to Dowlin and that, according to a recent legal opinion, he didn’t need the council’s authority to do so.

Some councilors objected, saying the council typically has had to approve the sale of a building for less than its assessed value. Councilor Keith Bona suggested taking a revote on a 2019 order that gave the mayor the authority to sell the property. But, the council decided to instead hold a special meeting about the project, to get more information from the developer and public input.

What the developer said: It will cost about $4 million and several years to renovate the theater, Buntic estimated. He promised to bring the theater to the best possible condition “and keep it that way.”

Leveling the floor is an important early step for the project, he said. Funding would come from private money, investors he has secured, and credit.

The theater is small: “It’s very limited what you can do,” he said, adding that that is a reason he is proposing a multiuse space that can host events.

A proposal for Dowlin Building for the Mohawk Theater

Buntic, who is based in the Long Island City neighborhood of New York City, was introduced to North Adams by another developer and he was interested in its “artistic vibe and the architecture on the Main Street and everywhere else.”

For 35 years, Buntic has worked on historic buildings in New York City, including art spaces, he told the council. “I know what I’m doing, and I know how to do it.”

He owns downtown property. For several years, he has owned the Tower and Porter Block on Eagle Street and the Dowlin Block, 101-107 Main St. He recently told The Eagle he plans to turn one into a hotel and the other into apartments. He told the council his partners on the projects backed out, and he now is the sole owner of both properties.

What the council said: Bona noted that projects at Buntic’s other two downtown properties do not seem to be moving forward. “Why should we believe that giving you the Mohawk now ... all the sudden we would see progress?”

Buntic explained that he has spent thousands on the downtown properties for demolitions, securing a chimney, and clearing out debris from the Dowlin Block. But, the main hurdle was his business partners, whom he no longer is working with. If it was just him, Buntic said, the Eagle Street project would have been done in two years.

The theater is a city “staple,” said Councilor Michael Obasohan, asking how Buntic planned to work with the community once the space was open. Buntic said he has a record of working with the public and community organizations that have approached him in New York City.

“What I found disappointing in your proposal was the lack of detail,” City Council President Lisa Blackmer said. “I want to see what your vision is — that’s what I’m signing on to.”

Buntic said he heard about the request for proposals about a week before they were due. Councilor Benjamin Lamb said there was only a month window to submit proposals. “Thirty days is no time when it comes to these RFPs. For us to expect the sun, moon and the stars, that’s one major issue.” He added: “I need to push back on that.”

When asked if he still would be interested in the future if the current proposal didn’t go through, Buntic noted that the property has been empty for decades. “I want something; now is the time to do that. For me personally, I’m interested, but I don’t want to be shifted around. ... I don’t mind coming to meetings. ... But, I’m a guy that wants to do things.”

Residents weigh in: A number of residents asked Buntic questions, and some expressed concerns.

“It’s being rushed through,” state Rep. John Barrett III said of the sale. “I don’t know why, but it’s wrong for this city.”

Joseph Smith asked if Buntic had $4 million in credit secured for the project. “Close enough,” Buntic said. Smith asked if he would share proof of that with the city.

Yes, he said, “but you’re not going to get the account number,” Buntic said, jokingly.

“I don’t want it to come off that the residents are against you,” Trevor Gilman told Buntic. “We don’t have a lot of people that have the resources to do what you’re doing.” He added that the developer seems accommodating, but that the concern was that the council did not have control over the sale.

What’s next?: The meeting was informational, and the only item on the agenda was Buntic’s presentation and public comment. At a future meeting, the council could take a revote on the order that gives the mayor the authority to sell the building, but it’s not clear if it will.

Mayor Tom Bernard plans to negotiate a sale with the only developer who submitted a proposal to the city's most recent call for redevelopment plans.

Veselko Buntic, the developer who submitted a proposal to redevelop the Mohawk Theater, recently submitted plans to North Adams for apartments on Eagle Street.

What the city does with the recent proposal to redevelop the long-empty Mohawk Theater will be decided under incoming Mayor Jennifer Macksey.

North Adams will restart process of selling the Mohawk Theater

The fate of the Mohawk Theater is not yet clear, but the public can soon weigh in on it.

Residents have a lot of thoughts about what should happen to the long-empty Mohawk Theater. Soon, they can share those opinions with Mayor Jennifer Macksey in two focus group sessions.