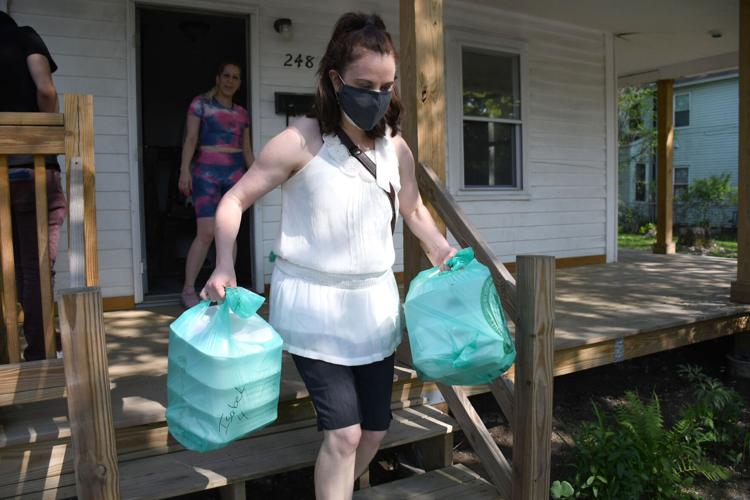 In May 2021, Nicole Fecteau carried food to be delivered through a Manos Unidas program in Pittsfield. 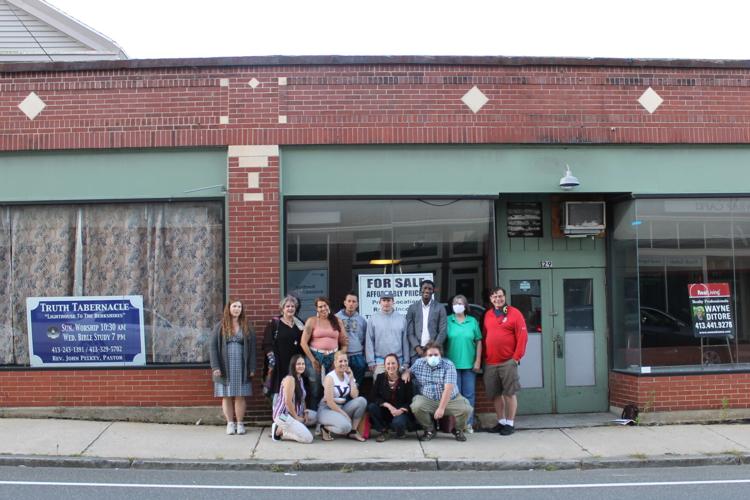 Members of the community group O.U.R. Resurge stand outside a new headquarters space at 117-129 Fenn St. in Pittsfield. 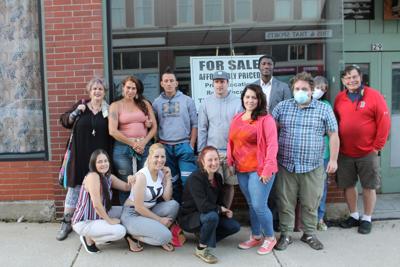 PITTSFIELD — The best thing about O.U.R. Resurge, Nicole Fecteau says, is that no one can take that space away from the community members who will use it.

An anonymous donor provided $225,000 last fall to help Roots & Dreams and Mustard Seeds, the nonprofit that Fecteau co-founded in 2017, purchase a building that it is working with partners to create a community center, a stone's throw from Pittsfield City Hall.

Before it can be used, the 117-129 Fenn St. property, which formerly housed Lach’s Lounge, needs rehabilitation — and funding to pay for rehabilitation. The nonprofit and its partners plan to use O.U.R. Resurge (O.U.R. stands for Our United Resource) to provide things that people need to improve their lives, whether it’s fresh groceries, a sign-language class or just a place where they can be for a few hours.

Such a community space is “something that the immigrant community has been waiting for and dreaming about for a very long time,” says Nancy Gómez, co-director of Manos Unidas, a multicultural cooperative that is one of Roots’ central partners.

For Gómez, it is difficult to speak about the building’s vision and significance without thinking of Miguel Estrella. The son of Manos member Marisol Estrella, he was experiencing an apparent mental health crisis March 25 when he was shot and killed by a Pittsfield police officer. As community members continue to grieve, Gómez believes a shared space can help keep people remain connected and hopeful.

Family, friends and supporters march and rally for Miguel Estrella in Pittsfield. They want answers and reform after his fatal shooting by Pittsfield police

“It is not therapy, but when you create a physical and social space without judgment, that welcomes all people, for our immigrant and Latino community it can become therapeutic,” Gómez said in Spanish. “Where youth, community members, immigrants and people we work with feel safe, in general, is not in a hospital room. It’s in the arms of community.”

Manos, which lost its former space to a fire in 2007, plans to hold its Mercado de Vida food distribution at O.U.R. Resurge. The building also may house a community fridge, as well as meetings of Cafecito, a Spanish-language discussion group that began as an effort to share resources among Pittsfield public schools parents when the pandemic hit.

Although the project has lofty goals, such as advancing the solidarity economy and empowering people who lack access to capital, the day-to-day work is to share resources and to provide “more free stuff,” says Michael Hitchcock, who with Fecteau co-founded Roots.

“This is kind of a proof of concept so that perhaps other groups we’re not involved with can do the same thing, with or without our help,” Hitchcock said. “Often investors want to take control of projects with their vision, so we are keen to ensure this pilot project is focused on people bringing their own visions to life.”

'Doing a lot with nothing'

While raising funds to rehabilitate the building, its partners are working in a temporary space at 5 Melville St., where they offer programming such as art classes, conversation groups and drop-in assistance with computers and paperwork. Those programs, which serve more than 70 people each week, eventually will move to O.U.R. Resurge, Fecteau said.

“We know that we can do a lot with nothing because we’ve all done it,” said Kristina Cardot, who helps to coordinate Manos Unidas’ Corazonidos summer program and community school. “We’ve been homeless, we’ve been abused, you name it. If everybody does a little and we unite our resources — 'I have food.' 'OK, well, I can fix your car.' 'You can take me somewhere.'”

Some of the O.U.R. Resurge partners met when they were members of the Tyler Street Lab, a nonprofit hub that rented space from Mill Town Capital. They enter O.U.R. Resurge with a shared vision for cooperative governance.

The building is dedicated to the late José Bruno-Santiago and Akosua Acheampomaah, both of whom were Manos Unidas members.

“Resurge” — spelled the same in English and in Spanish — is a nod to Bruno-Santiago.

“He passed away, but his thought was — he struggled with homelessness — a place where people could safely go,” Fecteau said.

A death brings tears, and reminiscences of 'a beautiful soul'

Terry Moore, a Roots member, contributed the “O.U.R.” part of the name, he said, because he “wanted something that the community had that could not be taken away from us now or in the future.” Especially for the West Side, he said, where many of those involved grew up and which Moore said has been “totally forgotten.”

The pandemic has exacerbated the need for such a space, said Anaelisa Jacobsen, a director emeritus of Manos Unidas.

“We do not have a lot of spaces of freedom in this society, especially for young men of color, new immigrants fleeing violence and women coming out of trauma,” Jacobsen said. “There is so much fear embedded in us, but when we feel heard, everything changes. We can survive and thrive beyond this.”

Another Manos member, Alonso, said he believes supporting youth should be a focus.

“I’d like to see a bunch of kids come after school, plop their books down and get on a computer and start doing their homework and playing games and jumping on the guitar and jumping on the piano and singing songs, giving them something to do to give them purpose,” he said. “We need a safe place right now where kids can go after school and parents feel comfortable knowing that their kids are here doing their homework, and they can have peace of mind without paying a trillion dollars.”

Central to O.U.R. Resurge, its creators say, is the pursuit of a framework that goes beyond traditional models for providing assistance.

The issue with charity, Hitchcock says, is that it is too top down. Even the concept of mutual aid, to him, feels too impermanent. The goal, rather, is to build a stable space where community members — even those who do not yet know it exists — can go and access what they need to grow as people.

"We are keen to ensure this pilot project is focused on people bringing their own visions to life.”

“We also are trying to make a space that people we don’t know yet ... will be able to plug themselves in, so it’s not just limited to our vision and experience,” Hitchcock said. “It’s actually open, which is a difficult thing to structure because it doesn’t sound like a structure to people."

Danny Jin is a former Report for America fellow for The Berkshire Eagle.

'Atravesando Esto Juntos': Food-distribution program is about 'getting through this together'

PITTSFIELD — Manos Unidas wants the meals it delivers to serve a lot more than just calories.