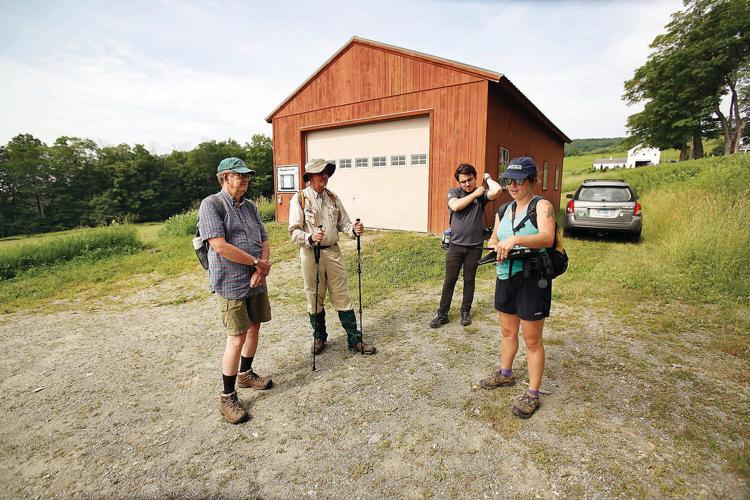 Hikers gather at the entrance to Hollow Fields Preserve in Richmond in July 2019. Town residents voted at annual town meeting on Wednesday to protect the use by the general public of such open space preserves in the community. 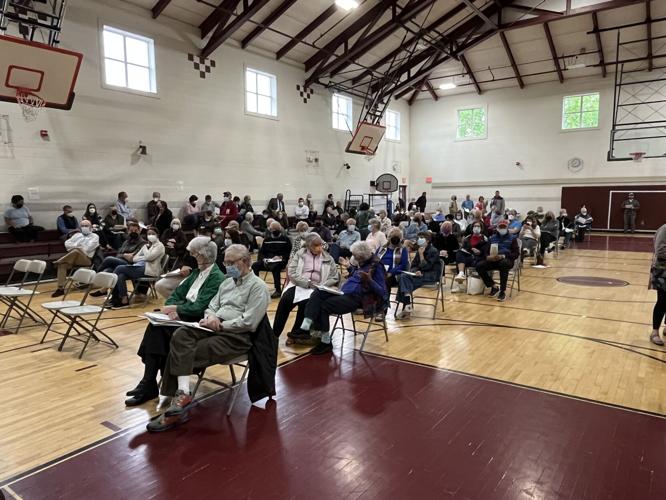 RICHMOND — It was a resounding victory for supporters of public access to open space.

Town voters have approved a Planning Board bylaw amendment guaranteeing that the general public can visit open space and conservation land such as Berkshire Natural Resource Council’s Hollow Fields and other 5-acre plus properties in town by right for recreation, education and research, subject to landowners’ permission.

The annual town meeting vote on Wednesday night was 233-62, well over the two-thirds supermajority needed for passage. Nearly 25 percent of registered voters participated.

A competing amendment by three families who live near Hollow Fields went down to defeat by 207 to 35. It would have required special permits for general public access to publicly promoted and advertised open space preserves.

The Planning Board’s amendment was based on fallout from efforts by adjacent residents on Perry’s Peak Road to limit access to the 600-acre Hollow Fields Preserve, which was heavily used during the height of the COVID-19 pandemic.

After the town’s Zoning Board of Appeals voted to require a special permit for public use of the site, the BNRC filed a lawsuit in Massachusetts Land Court against the zoning board. The neighborhood group then joined the suit. Last year, a judge imposed limits on Hollow Fields, including a 9 a.m. to 5 p.m. weekday restriction, pending a town meeting decision.

How should Richmond’s open land be used and who can use it?

Citing the controversy, Planning Board Chairman John Hanson told the crowd at the Richmond Consolidated School that “it was important to clarify zoning to help resolve the issue. By right means it doesn’t require a special permit, but it doesn’t mean you have the right to ‘go wild’ or do any damage.” He noted that existing restrictions in the town’s zoning bylaws continue “to keep harm from happening.”

Noting that “Perry’s Peak has been enjoyed for generations as a hiking, bird-watching, hunting, berry-picking destination,” Rebecca Augur, a member of the Richmond Land Trust, described the town’s vision as one where “open space is celebrated and passive recreation is a right.”

Ann Larkin, a Land Trust founding member, praised the Planning Board for “a beautiful job, making our open spaces easy and accessible to all of us, residents and non-residents.”

But Perry’s Peak resident Jeffrey Morse called “a public park in a residential neighborhood a very valuable asset; at the same time, I think we’d all agree that the unique character of our neighborhoods is already one of Richmond’s greatest assets, that’s why we love it so much.”

Morse warned of risks to that asset without examining whether “promoting and advertising unconditional public access causes negative changes to the existing and future characteristics of the neighborhood.”

He cautioned that the Planning Board’s by-right amendment would prevent “oversight or approval of the town, or anyone for that matter, even if the local residents who likely have made a huge investment in their home right next door believe it not to be in the best interest of their neighborhood.”

Morse suggested his Green Meads Farm business might not survive because of increased liability costs —“that is to say, my livelihood is at risk.”

He called the neighborhood group’s competing amendment requiring a special permit for promoted and advertised access to Hollow Fields as “a prudent step that helps ensure the character of our town is preserved and protected by providing an opportunity for the town and property abutters to voice concerns before problems develop.”

Morse’s neighbor, Jane Grossman, complained that “we’ve been vilified and called names, there is a ton of misinformation flying around town. ... All we’ve been trying to do is protect the right of every Richmond resident to maintain some control of what happens in their neighborhood.”

But Rebecca Sabo supported the Planning Board amendment “so everyone in town can work together, pool their resources for something that everyone can enjoy.”

After nearly all residents voice-voted to end the debate and proceed to a decision, secret balloting yielded the landslide approval of the Planning Board’s by-right bylaw amendment.

Representing the three families proposing their own version of the amendment, attorney Matthew Mozian emphasized that his clients had no desire to stop hiking at Hollow Fields, but to continue it with some restrictions.

“Open space is a great use, it’s wonderful … but there are particular areas where friction is caused, where you have a great use that adds a detrimental character to the neighborhood,” said Mozian.

But, as he described the residents’ amendment, “if the landowner promotes or advertises by any means or medium to the general public the recreational use, they need a special permit.”

Mozian contended that one special permit per property for an unlimited time would suffice, but acknowledged the amendment would keep the general public — “people you don’t know” — from using areas like Hollow Fields and give the town “a seat at a table and give abutters some rights as stakeholders in this town.”

But residents disagreed, voting down the neighborhood group’s proposal by an 85 percent margin.

• Voters approved unanimously nearly $5.9 million for town operations and for the Richmond Consolidated School, as recommended by the Finance Committee. That total is down 1.2 percent from last year, but overall town spending, topping $8.3 million, is up nearly 8 percent.

• They also approved hiring a full-time EMT for the Richmond-West Stockbridge ambulance, and sharing ambulance service operating costs by the two towns.

Clarence Fanto can be reached at cfanto@yahoo.com or at Twitter

Voters backed the right to visit open space and conserved land. But Richmond’s Hollow Fields remains in a legal tangle

The 660-acre Hollow Fields preserve in Richmond remains under court restrictions, and neighbors question whether an access road is public or private.