District officials say that the school resource officer responded quickly after the fight, and Pittsfield Police confirm that three assault-and-battery incidents are being investigated by one of the SROs.

The fight revitalized a community petition to keep officers in schools and prompted questions from School Committee members during Wednesday night's meeting as to why a community conversation and reevaluation of the program has been slow to get off the ground.

Superintendent Joseph Curtis told the committee that the district is hiring an outside consultant to conduct a community survey, with results expected by April or May.

The committee voted 5-2 to refrain from discussing the program until the results of the survey were available. Committee members Nyanna Slaughter and Alison McGee dissented.

What is an SRO?

A school resource officer. These are police officers tasked with maintaining safety and reducing crime in schools.

What do they do?

The SRO is responsible for responding to and investigating any criminal misconduct that happens within the schools. For nonemergency student misconduct, it's up to the school principal and administrators to decide whether to involve the SROs.

What can't they do?

Massachusetts law specifically says that SROs are not meant to "serve as a school disciplinarian." Pittsfield Public Schools' agreement with the Police Department also says that SROs can't be asked to step in and serve in school support roles like as a hall monitor, substitute teacher or cafeteria monitor. 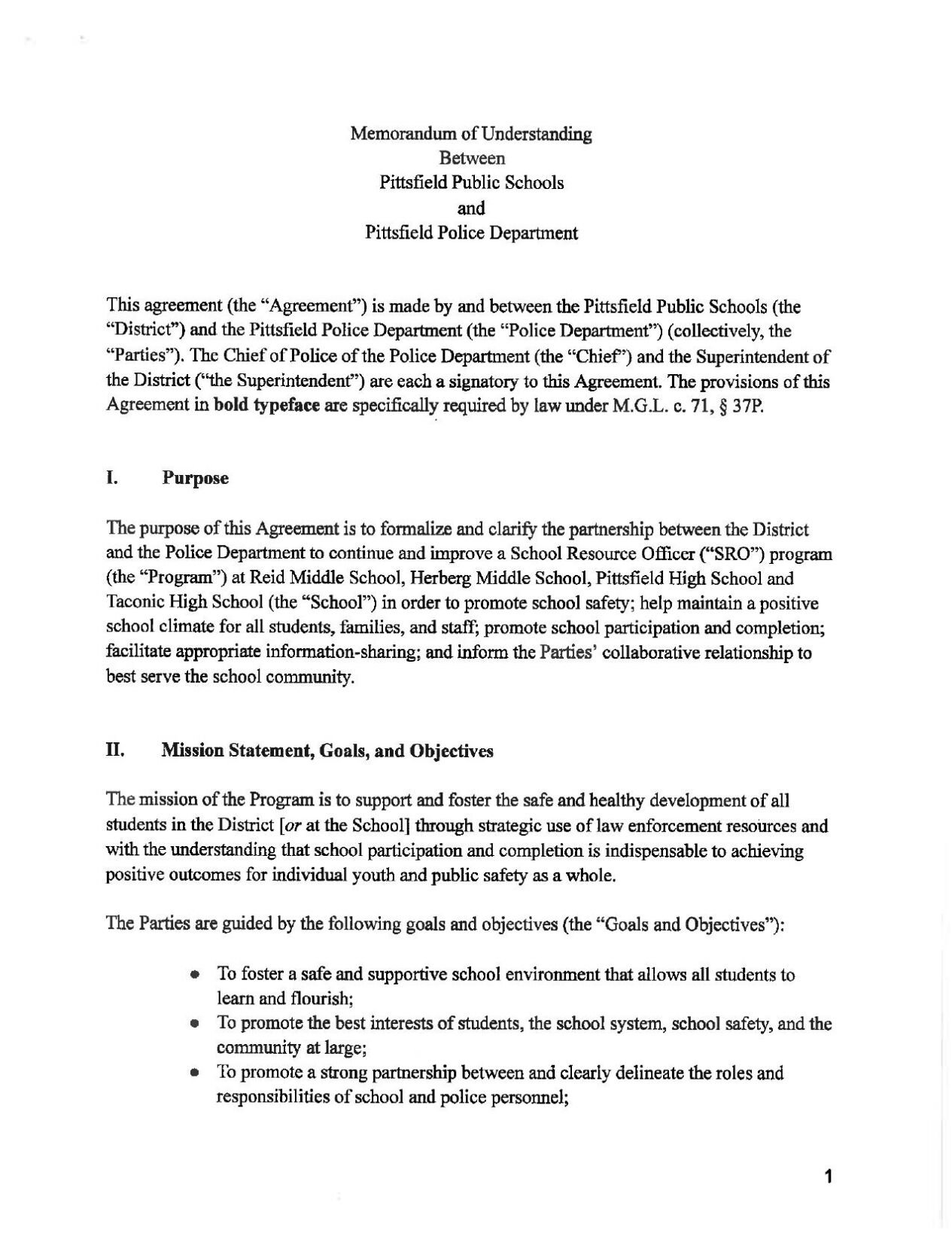 Just like school employees, SROs are required to follow laws around protecting student privacy. Officers can't share information about a student or their family’s immigration status, citizenship, neighborhood, religion, national origin, ethnicity or “suspected, alleged or confirmed gang affiliation” with other law enforcement agencies unless it is related to a “specific unlawful incident.”

So, how many SROs are in Pittsfield schools?

The district has two SROs to oversee Reid Middle School, Herberg Middle School, Pittsfield High School and Taconic High School. The officers rotate between the schools, switching buildings on a morning and afternoon schedule to cover all four buildings each day.

Pittsfield Police Lt. Gary Traversa said in August that while the ideal arrangement would be to have four officers, each responsible for one school, the department likely will only be able to provide two officers for this school year.

"Given our staffing challenges, I don't think it's realistic that we'll be able to get it back up to four this year," Traversa said.

What's the difference between SROs and other officers?

The major difference between a patrol officer and an SRO is the training. SROs have to complete state-required training on "child and adolescent cognitive development, deescalation techniques," and "alternatives to arrest and diversion strategies."

State law then requires that SROs attend, at minimum, 40 hours of training each year. Pittsfield uses the trainings hosted by the National Association of School Resource Officers each year and has a $115,600 budget to cover training costs for SROs this year.

Who pays for the SROs?

SROs are Pittsfield Police Department employees and not school district employees. The salaries and benefits for the officers are covered by the department's annual budget.

Is there any oversight on the program?

Yes. The superintendent and police chief are required to conduct an annual end-of-year review of the SROs. The review is presented to the district's emergency coordinator and the school principals.

Complaints about the SROs can be filed through the Police Department's complaint process.

After the massacre at Sandy Hook Elementary School in Connecticut in 2012, the Legislature adopted a law in 2014 that included a requirement that each school district in the state have at least one resource officer per district.

As part of the criminal justice reform bill of 2018, the state beefed up the section related to SROs, adding requirements for the memorandums of understanding — essentially contracts — between police departments and school districts.

In December, the state revised the laws around SROs again, this time saying that a police chief shall assign at least one officer to the district "at the request of the superintendent."

Also, superintendents now are required to give an annual presentation by Aug. 1 to the school committee on the cost of an SRO to the district, the budget for mental and emotional support staff, and the number of school-based arrests, citations and court referrals made in the past year.

The Department of Elementary and Secondary Education is required to collect the arrest and court data from each district every year and publish it in a public report.

The city's chief school official vowed to issue extended suspensions for any students involved in a fight following a brawl Tuesday at Taconic High School.

Park Square rally this afternoon will promote use of school resource officers: What you need to know if you go

Six candidates for School Committee met virtually Thursday evening in a debate hosted by the Berkshire County branch of the NAACP. Candidates talked school safety, teacher retention and how to adapt to prepare the school district for the future.

The Pittsfield School Committee picked its most tenured members to lead it through a busy year. Here is what's on the agenda

The new School Committee has its work cut out for it with a school safety study, staffing and sub shortages, the coronavirus and a new budget season.

Participants who spoke during the webinar said that officers may have their place in the larger community, but the tools of the police department don't match with a supportive school environment.

The first results from Pittsfield Public Schools' school safety study are in. Here's what you need to know

While data from the adults surveyed showed they clearly favored student resource officers, the same cannot be said of students — particularly students of color.