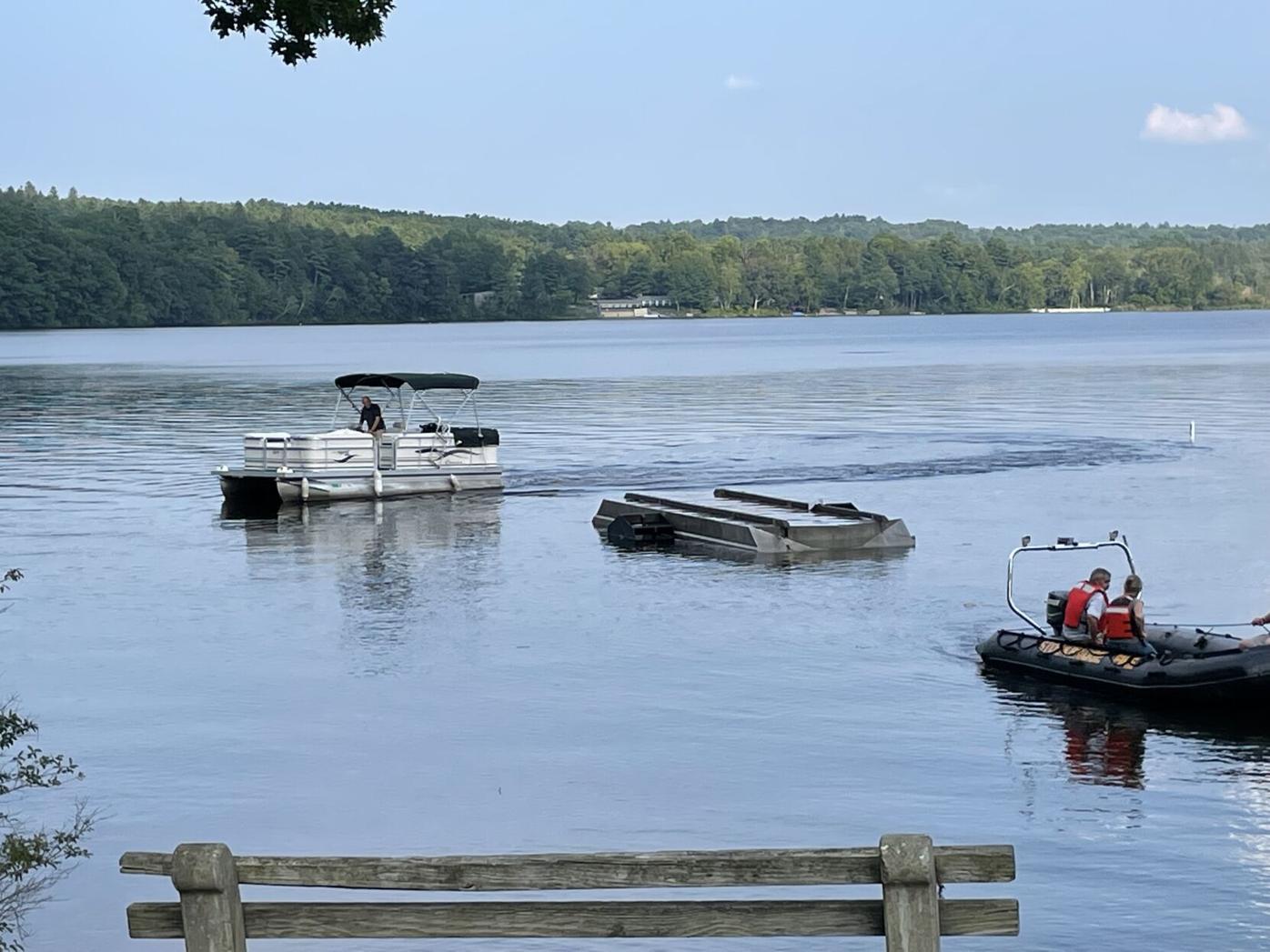 The capsized Stockbridge Bowl weed harvester is towed close to shore by members of the town’s fire department. 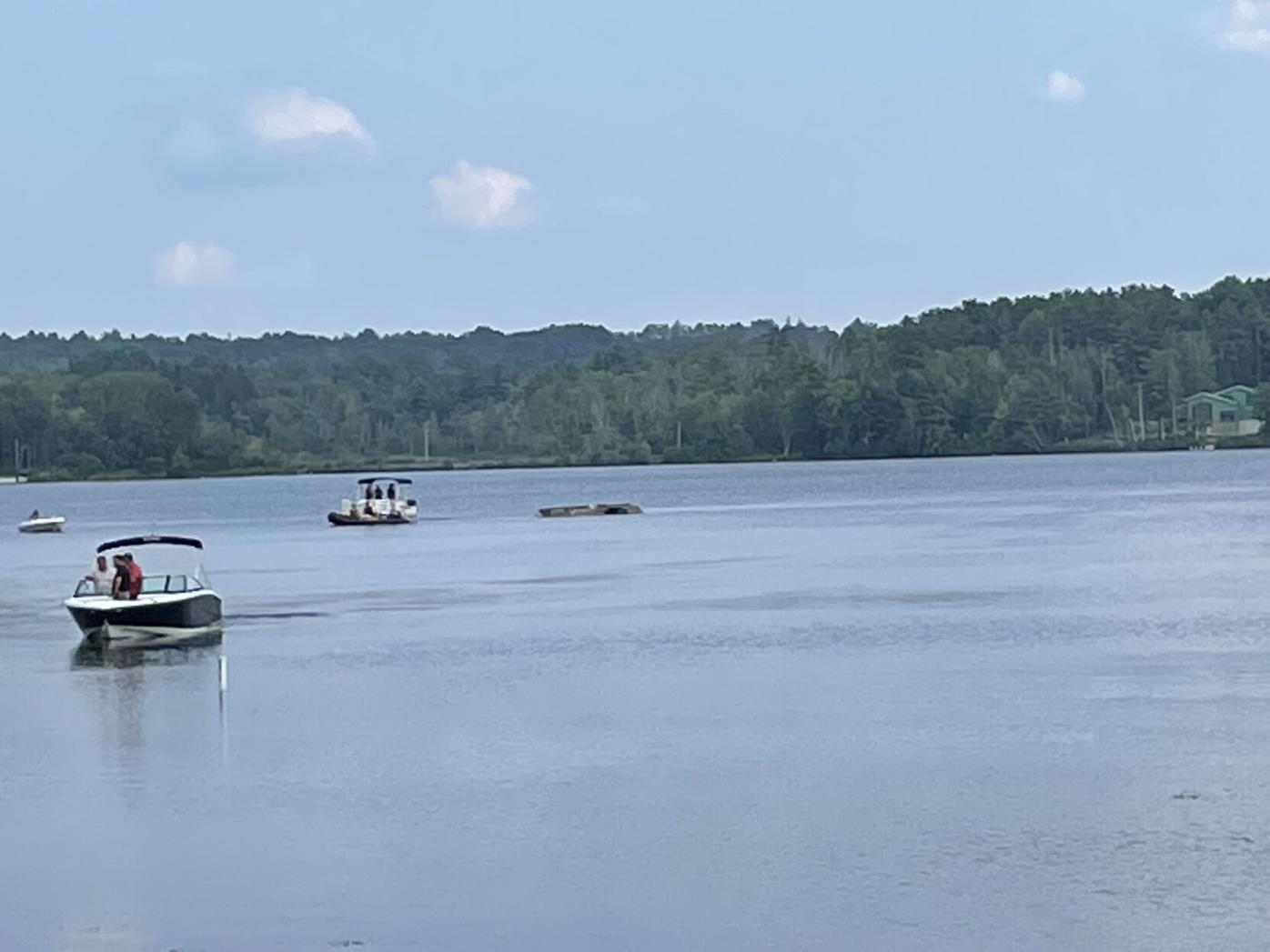 The tipped-over Stockbridge Bowl harvester is towed to shore Thursday.

The capsized Stockbridge Bowl weed harvester is towed close to shore by members of the town’s fire department.

The tipped-over Stockbridge Bowl harvester is towed to shore Thursday.

STOCKBRIDGE — The town’s harvester, mounted on a pontoon and resembling a barge, capsized while trolling for weeds on Thursday afternoon. There was no indication of any leak of the harvester’s “bio-friendly” oil, town officials said.

The operator of the boat, Chuck Kohrer, was uninjured. He lives on the Bowl and volunteered to the town to operate the harvester for five weeks this summer.

The cause of the harvester’s sudden, unexplained rollover is under investigation, said Town Administrator Michael Canales, who was at the scene with all three members of the Select Board, Fire Chief Vincent Garofoli, Facilities Director Chris Marsden and other town government members.

“That’s the frightening part, it’s a mystery,” said Canales. “If it had been taking on water and filled with water, it would have been very hard for us to tow it. We’re exploring exactly what happened.”

Kohrer told The Eagle he was harvesting for weeds near the three-acre island named “Kwuniikwat.” It is at the southwest end of the 392-acre state-owned “Great Pond.”

“It started listing to the right, so I got out of my seat, stood to the left, using the controls from that spot, and it was fine,” said Kohrer. “Then, all of a sudden, it went ‘oomph,’ I jumped off, it flipped over and scared the heck out of me.”

After swimming to shore, he surfaced in the Beechwood community, found an occupied house and called in to report the mishap.

The capsized harvester was towed by a small flotilla by members of the Stockbridge Fire Department close to the town boat ramp off Interlaken Road (Route 183). The plan was to seek advanced equipment, potentially from R.W.’s Towing of Lee, to try to haul the vessel out of the water and take it to the town’s Highway Department garage.

A state Department of Environmental Protection official arrived on the scene to assist with the investigation and ensure that there was no contamination of the lake.

The incident was first reported to police and the Stockbridge Fire Department shortly after 3 p.m.

Out of an abundance of caution, police cleared the town beach, Select Board Chairwoman Roxanne McCaffrey said.

“The boat started listing to one side, eventually it hit the tipping point and flipped over,” said McCaffrey, who was on the scene. “It was a very exciting afternoon.”

Stockbridge town leaders, citing a DEP site survey, report no significant environmental mishap after the boat capsized in the state-owned lake on Thursday, but the cause of the 'flipover' remains under investigation.