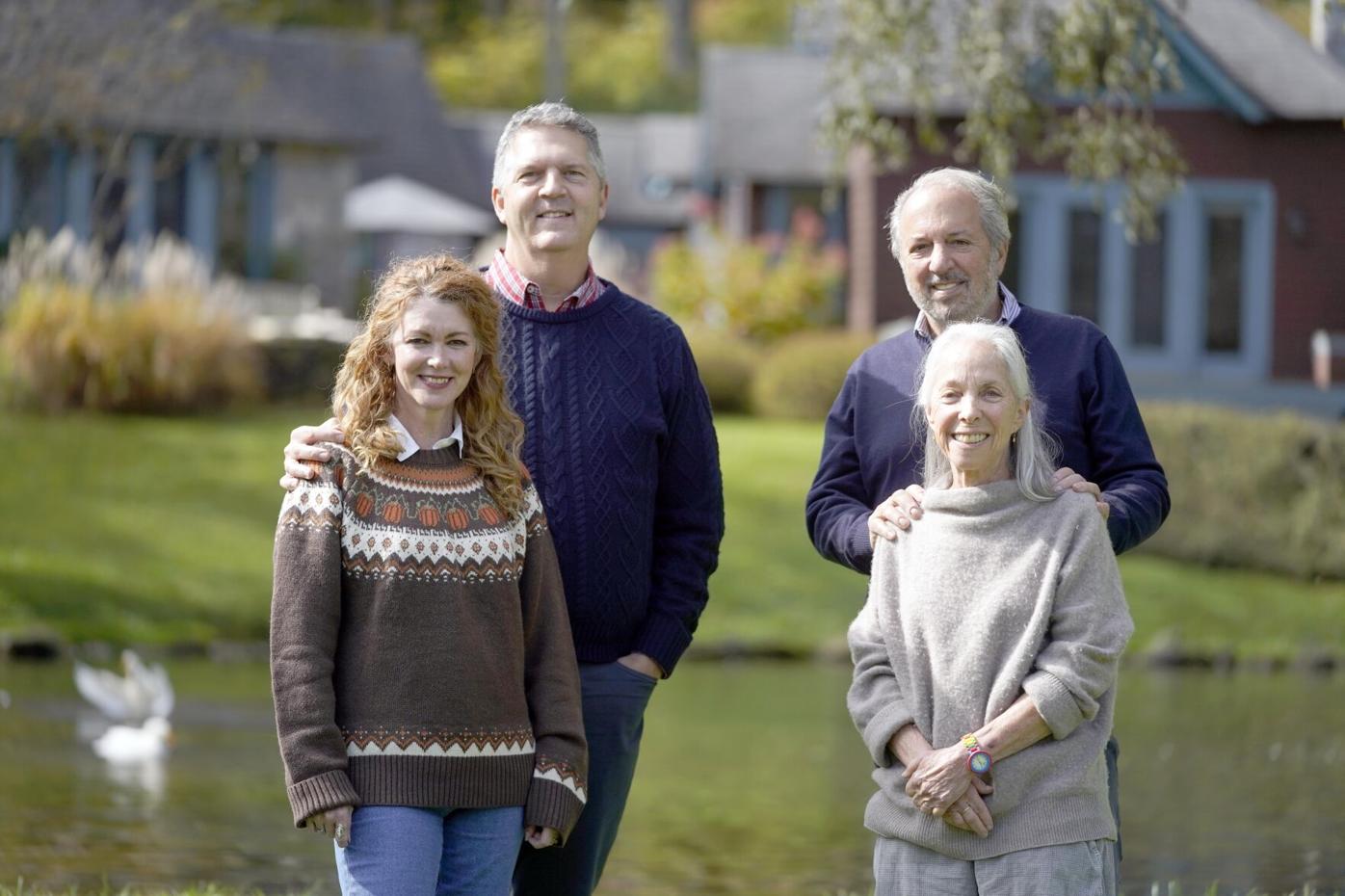 Grimmett and Smith, left, have bought Stonover Farm from the Wermans, right. After first transforming and then operating Stonover as a top-shelf boutique bed-and-breakfast and elaborate wedding destination for 12 events a year, the Wermans, in their mid-70s, are turning over the site to a couple with deep roots in show business. 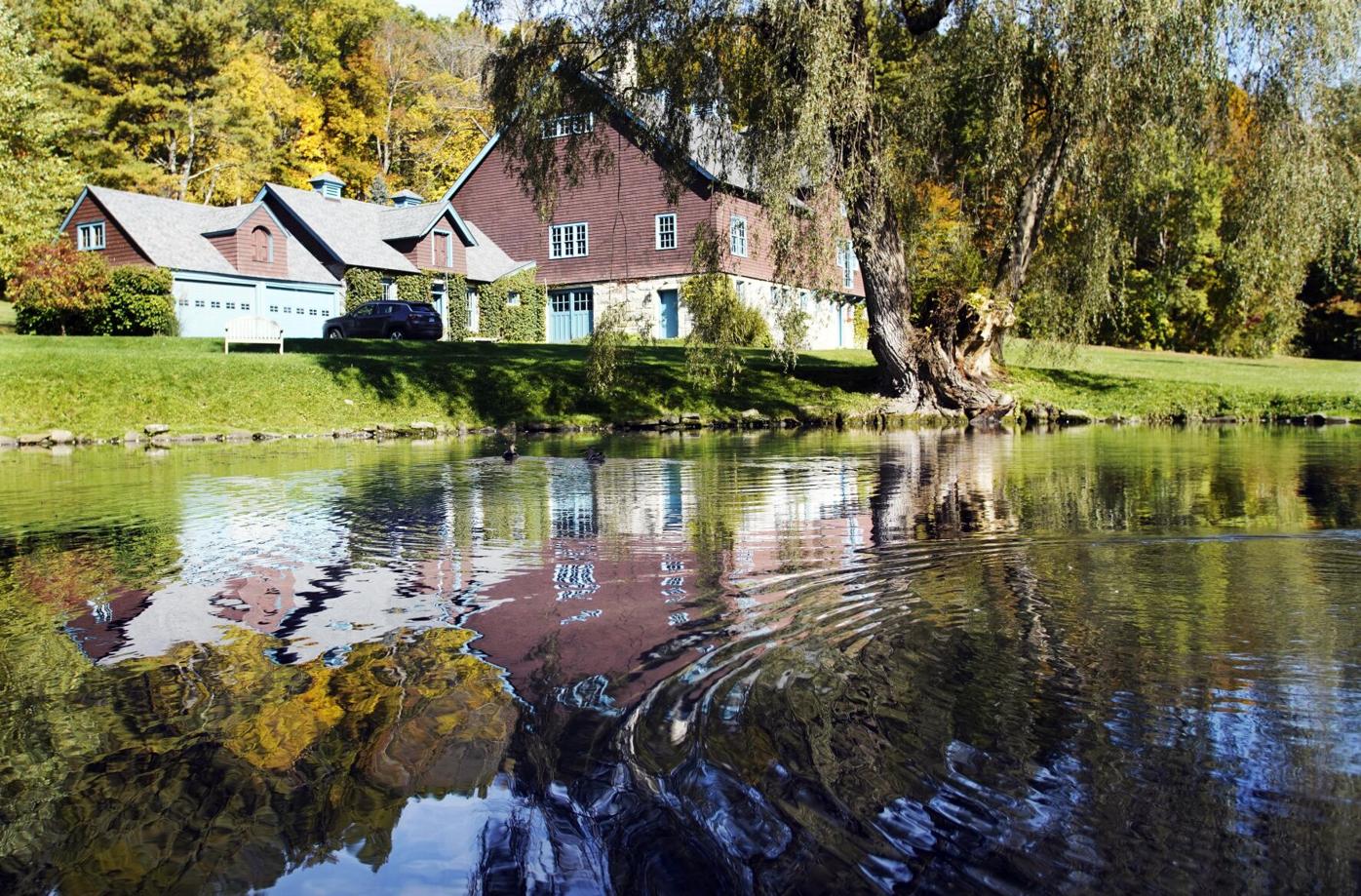 Randy Grimmett and Allison Smith have purchased Stonover Farm in Lenox from Tom and Suky Werman. The location is well-known for its duck pond, which has existed there for more than 100 years. Locals still call Stonover "the duck farm." 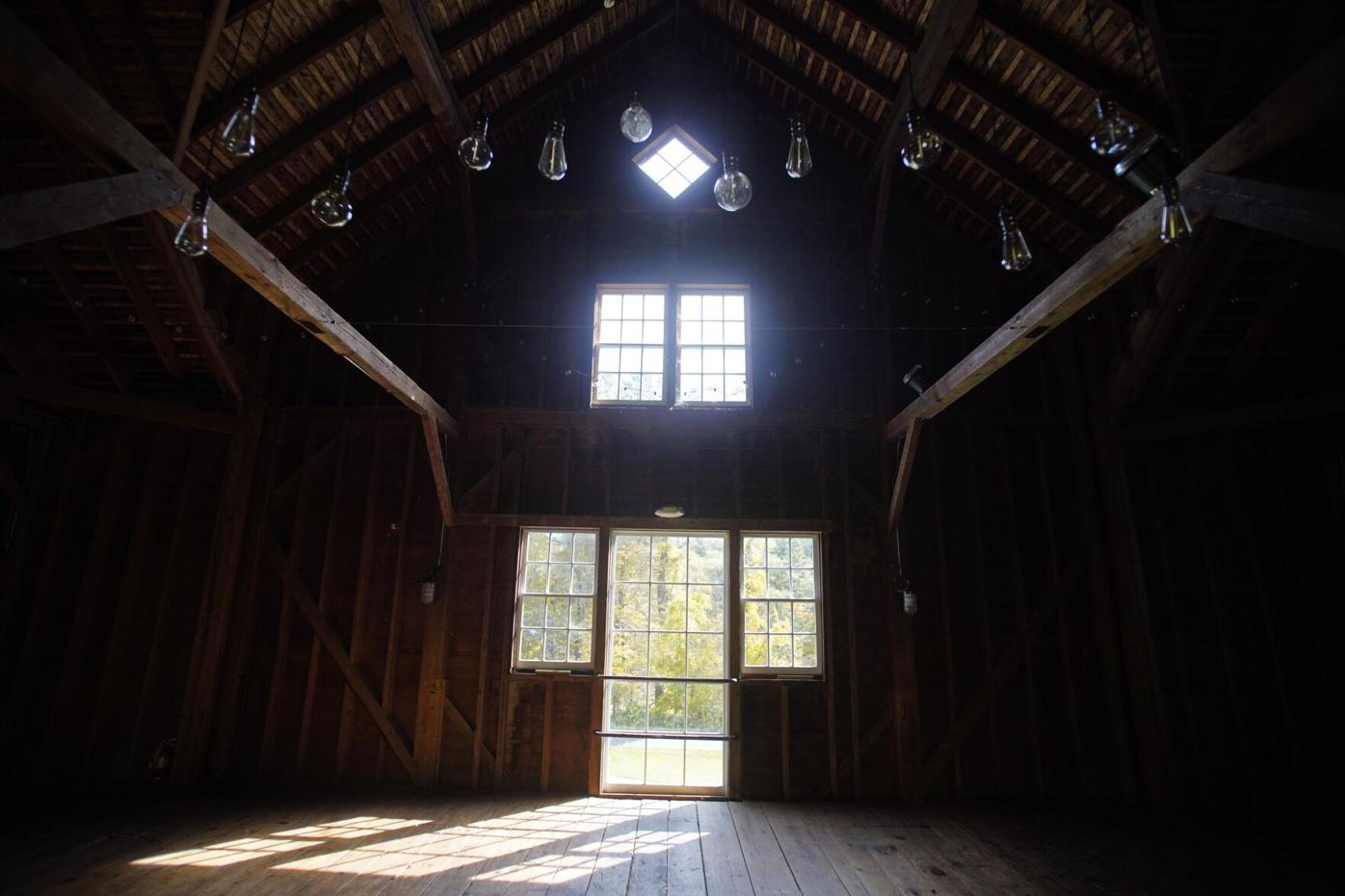 Stonover Farm is well-known for its hospitality, and as a venue for events. 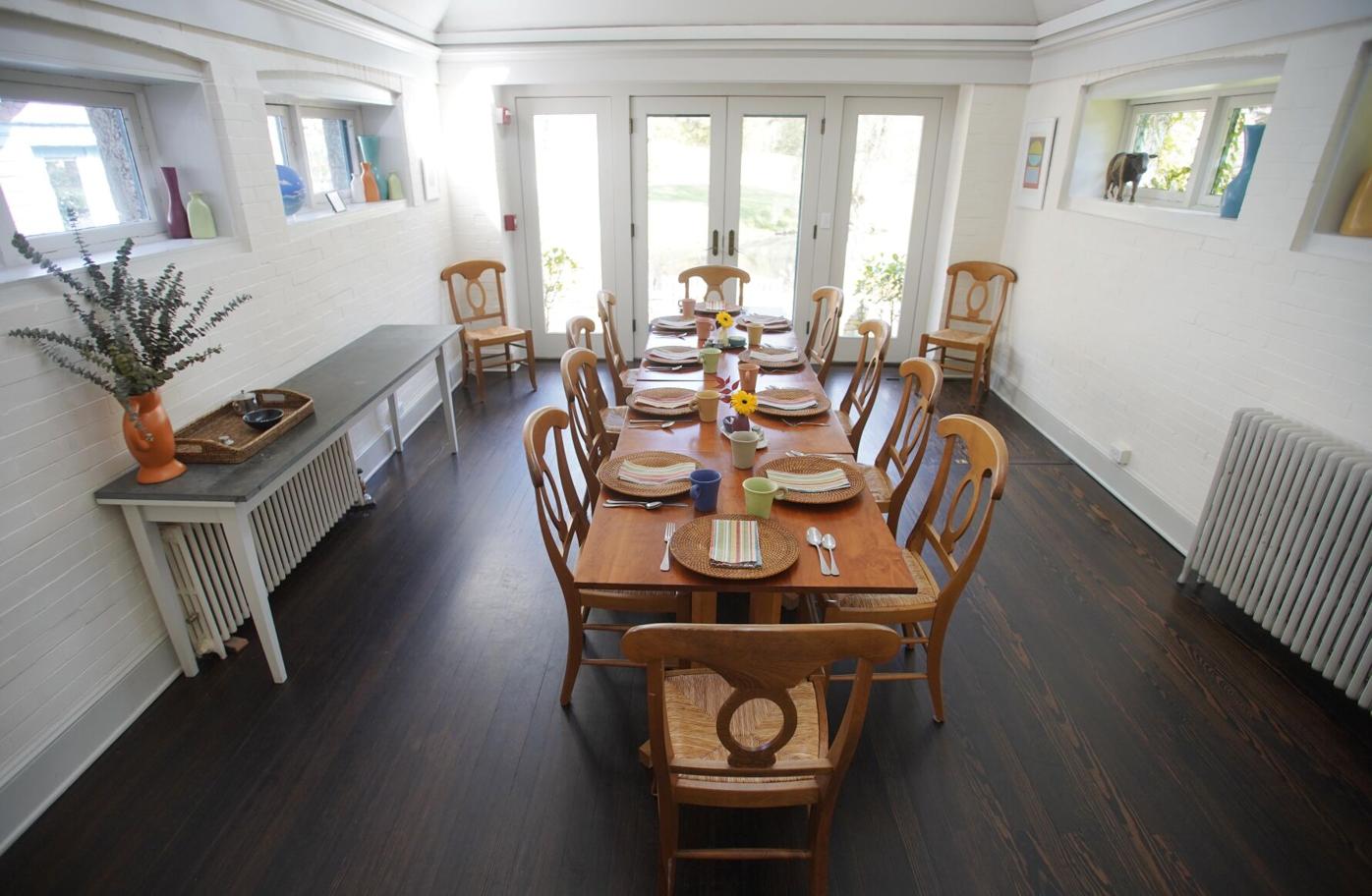 The famous breakfast room at Stonover. 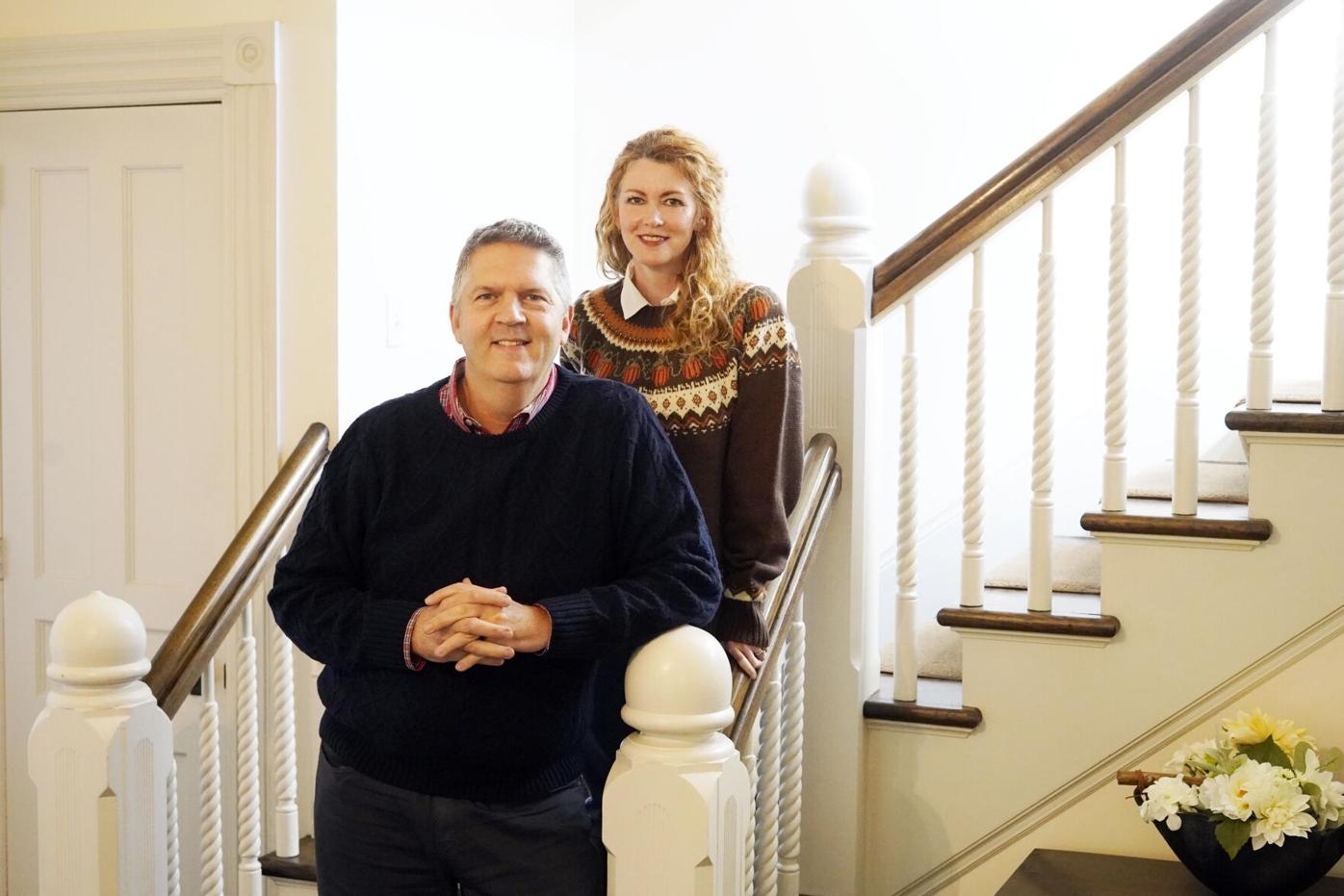 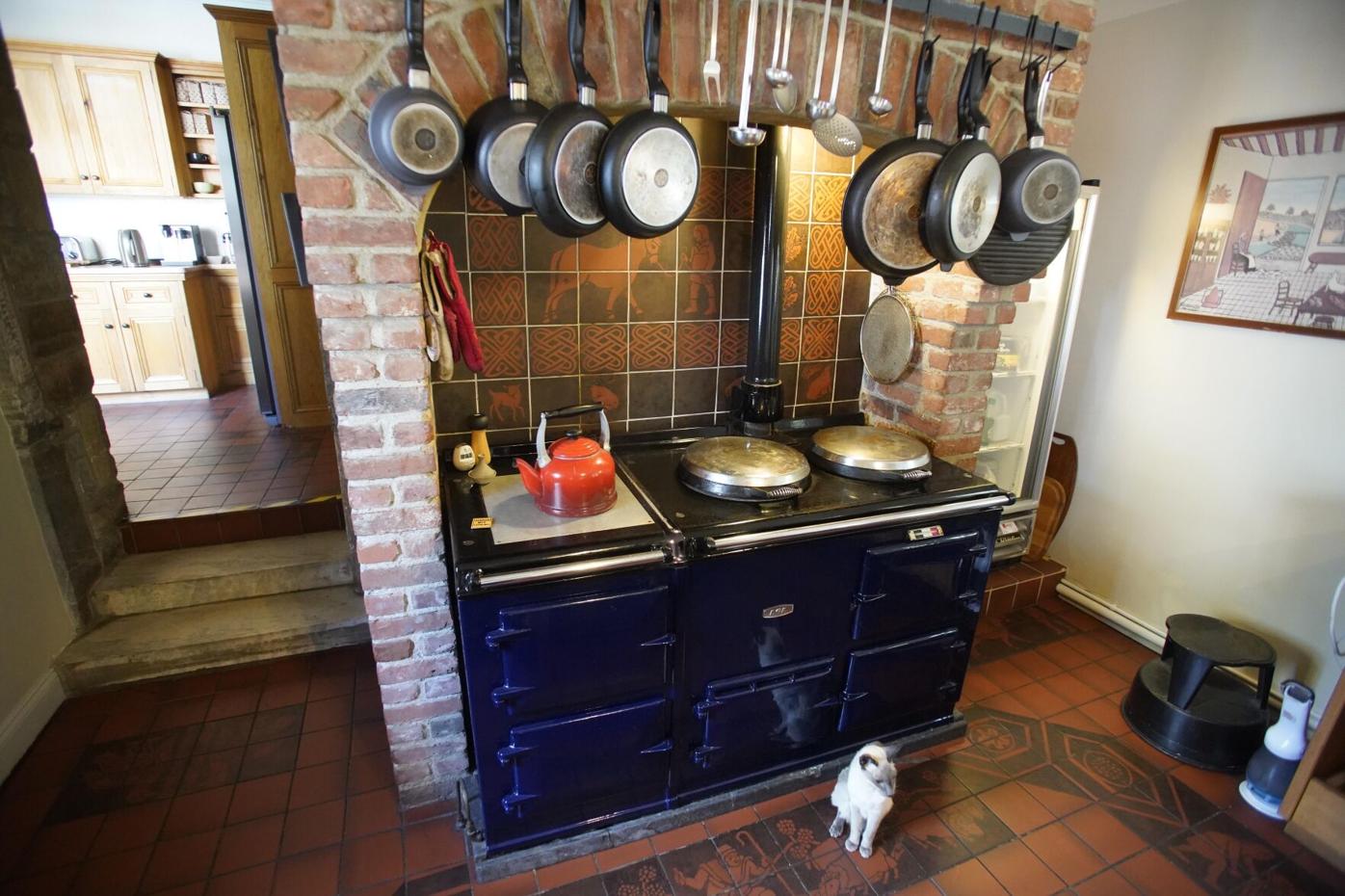 The stove at Stonover is one of a kind.

Randy Grimmett and Allison Smith have purchased Stonover Farm in Lenox from Tom and Suky Werman. The location is well-known for its duck pond, which has existed there for more than 100 years. Locals still call Stonover "the duck farm."

The famous breakfast room at Stonover.

LENOX — Many locals still call it “the duck farm” — formally, the Stonover Inn, a historic Under Mountain Road property owned for 20 years by former big-league rock music producer Tom Werman and his wife, Suky, an educator who reinvented herself as an art gallery curator for the farm’s renovated barn.

Randy Grimmett and Allison Smith have bought Stonover Farm from Tom and Suky Werman. The location is well known for its duck (and goose) pond,…

Now, after first transforming and then operating Stonover as a top-shelf boutique bed-and-breakfast and elaborate wedding destination for 12 events a year, the Wermans, in their mid-70s, are turning over the site, including the much-photographed pond hosting a village of ducks, to a couple with deep roots in show business.

Randy Grimmett and his wife, Allison Smith, seasonal residents in Lenox for the past five years, promise to keep Stonover just as it is, with a few cosmetic updates, when they reopen the inn.

He will be able to do his work as an attorney there, and she will pursue her acting and newly developed literary career.

“I feel happy to confidently say, I’m not done performing,” said the former Broadway child star of “Evita” and “Annie” and a cast member of NBC’s “The West Wing.”

And, as part of the Stonover deal, the waterfowl crew gets to keep its forever home.

Allison Smith: The incoming co-innkeeper (it’s her maiden name) has had a 40-year career in show business, starting at age 9 in the Broadway production of Andrew Lloyd Webber’s “Evita” alongside Patti Lupone and Mandy Patinkin, and, a year later, graduating to a three-year run (more than 1,000 performances) in the title role of the hit musical “Annie.”

Her TV credits included a recurring role as Mallory O’Brien in “The West Wing” (daughter of Chief of Staff Leo McGarry, played by John Spencer, and romantic interest of Sam Seaborn, Rob Lowe’s character). That was followed by stints in “Kate & Allie” and more than 100 appearances on other TV series.

Now, as Smith completes her untitled debut novel, she also hopes to return to her first passion, the New York stage.

Randy Grimmett: He is an attorney in the music business and intellectual property rights, now working from home.

During the coronavirus pandemic, he joined many other professionals in discovering that he could work remotely from anywhere.

Grimmett and Smith are the parents of two daughters, one attending an area high school and the other in college near Boston.

The transaction for the property and the robust business will close Oct. 29 at $4.4 million for both.

The Wermans paid $1.5 million to acquire the land and its buildings in 2001, then funded an extensive, expensive restoration before opening the inn a year later under a special permit from the zoning board, with Linda Ronstadt, performing at Tanglewood, as their first guest.

“She was incredibly gracious,” Suky Werman recalled. “It was literally the first time we made breakfast for anyone, and she had brought an entourage.”

The Wermans, good friends of Grimmett and Smith, will be moving to a home they bought more than a year ago, a mile away on Under Mountain Road.

“It was a gigantic change,” Werman acknowledged, referring to his arrival in Lenox to become a country squire and innkeeper after 23 years signing performers and producing hit albums during the 1970s and ‘80s. His clients included REO Speedwagon, Boston, Ted Nugent, Motley Crue, Cheap Trick, Twisted Sister, Poison, Molly Hatchet and Jeff Beck.

“Now, I’m so excited,” he enthused, preparing to step away from his second career. “But, it’s pretty tough for Suky; she just loves it, and she’d stay here forever. We had considered closing the five-unit inn and having only weddings, but this is an expensive place to maintain and operate unless you’re working it.”

How did Grimmett and Smith decide to make a similar drastic change from Studio City, just over a hill from Hollywood, to the bucolic Berkshire countryside? Allison recalled reading a Los Angeles Times feature in 2007 about the Wermans’ purchase of “a rambling country property and turning it into an upscale bed-and-breakfast.”

“I turned to Randy and said, ‘See, people do it, why aren’t we doing this?’ ” said Smith, a native of Waldwick in Bergen County, N.J., just west of the New York City borough of Manhattan. “It sparked something that Randy and I, in our personal lives, knew that we would love to do.”

A year or two later, on a family visit to the Northeast, they checked into the inn’s cottage for several nights.

“I said, ‘What a dream. I just want to live there someday.’ We were repeat customers, and we befriended the Wermans. I did tell them, ‘If you ever consider selling this place, could we please be the first people you call?’ I thought if they ever made it available, I’d be heartbroken if somebody else got it.”

“The great part for us,” Randy Grimmett recalled, “was that we were in no hurry and they said, whenever we were ready, let us know.”

“When they called last year, after we sorted out some logistical family details, there was no hesitation whatsoever,” he said. As permanent Lenox residents since last June, Grimmett pointed out, the pandemic’s restrictions demonstrated that he could work remotely from anywhere.

“That made it more realistic to think about [acquiring the inn],” he stated.

“We’ve undergone a change about what the social contract for work looks like now,” he commented. “Tons of people have relocated to the Berkshires.”

“In addition to our long-coveted dream coming true, it’s an addition to the multiple things Randy and I do in our lives,” Smith said. “Our complete heart and soul will be about Stonover Farm, but he will continue to do what he does and I will continue to work in the ways that I creatively want to work. I grew up in a small town, maintaining a small-town life while having a professional life.”

“Randy grew up in the country [on his fourth-generation family farm near Tulsa, Okla.], which really speaks to who he is, but he also explored his intellectual and career pursuits,” she said.

“The ducks will stay,” Smith added. That means they will not be evicted from their 130 year-old ancestral home, and the history of the property will be protected. It was built in 1890 by Pittsfield architect Charles T. Rathbun for New York lawyer John E. Parsons, who named the farm after his Lenox “cottage,” the 45-room French country house, Stonover, then a mile across the valley on Yokun Avenue, but demolished in 1942.

Smith described “the half-entry into the life we thought we wanted” as easing the transition to the innkeeping mission. The family residence purchased five years ago on West Street was the gatehouse for the former Stonover “cottage.”

The day-to-day nitty-gritty of running the year-round inn will continue to be handled by Stonover’s general manager, Christine Fraser, whom the Wermans hired away from Blantyre four years ago.

“She will be indispensable to us,” said Randy Grimmett, as she continues to supervise a team of staffers in what amounts to a “turnkey” ownership swap.

“Tom and Suky have created the most wonderful place, the most magical place,” he stressed. “All the appeal for us is because of the realization of their vision, so, we don’t have significant changes to make. The way the inn is run, the graciousness and hospitality, the beautiful space they’ve created, it’s our privilege to pick up on that well-blazed trail and continue the path forward. The visceral response everyone has being here is because of what they’ve created.”

“We are walking into a pristine, well-built, well-loved, beautiful creative environment,” Smith added. As Tom Werman noted, “I feel good about handing them a robust business, with all of next summer’s weddings booked already.”

For the last words, Suky Werman, choking back tears, wanted it known that “we love this community; we feel very lucky to have moved here, and everything about it continues to be a great place to live.”

LENOX — Some ducks have all the luck.

The new Oklahoma-based owners of the former Days Inn in Lenox have broken ground on a renovation and expansion project to transform the property into a Berkshires' retreat. Life House Berkshires is anticipated to open in May 2022.