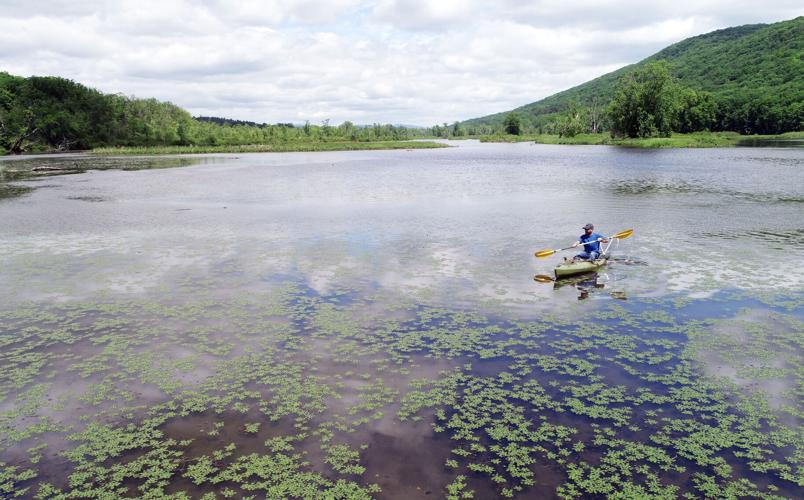 A man fishes from a kayak on Woods Pond in Lenox where the Housatonic River oxbows empty into the pond. The Tri-Town Health Boards agreed this week to hold a forum on public health issues related to the planned PCB landfill just south of the pond. 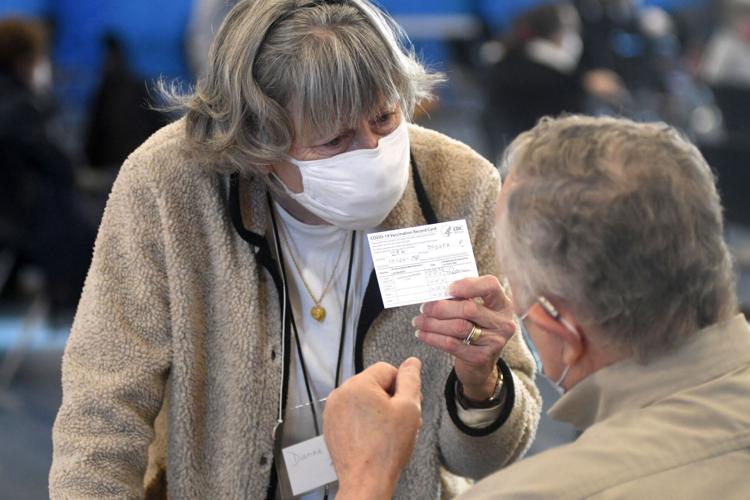 Registered nurse Dianne Romeo of the Western Massachusetts Medical Reserve Corps vaccinates people at the coronavirus shot clinic at Berkshire Community College in 2021. Romeo, who chairs the Lenox Board of Health, said this week at a meeting of the Tri-Town Health Boards that she “sees no harm" in having the group convene an educational forum on the planned Upland Disposal Facility in Lee that would contain PCB-laden sediments pulled from the Housatonic River.

LEE — Responding to requests from critics of a planned PCB “dump” in Lee, the Tri-Town Health Boards will hold a forum on the issue.

But even as officials representing Lee, Lenox and Stockbridge agreed to go ahead with that public meeting, the million-dollar question surfaced: Does the regional health agency have any legal power to intervene in the five-town agreement, which includes Great Barrington and Sheffield?

The Rest of River settlement agreement reached in early 2020, calls for up to 1 million cubic yards of low-level PCB-contaminated sediment extracted from the Housatonic River to be placed in the double-lined disposal facility in Lee. The most toxic material would be shipped out of state.

But the facility has encountered widespread community opposition in Lee.

The Eagle spoke with nearly 20 homeowners and renters who live within a mile of the proposed landfill. Two weeks after residents voted to advise the Select Board to find a way out of the Rest of River cleanup deal, neighbors cite concerns about environmental harm, public health risks and threats to property values.

The settlement was negotiated over 18 months by the five-town Rest of River Municipal Committee, joined by the EPA, the General Electric Co. and other parties. The agreement calls for GE, the polluter, to pay $25 million each to Lee and Lenox, where about 50,000 truckloads of contaminated material would traverse roads in those towns.

It also reserves $1.5 million apiece for Stockbridge, Great Barrington and Sheffield. Pittsfield, where Mayor Linda Tyer negotiated a separate settlement agreement, would get about $8 million.

The Tri-Town Boards of Health on Tuesday unanimously approved a motion by Lenox member Dr. John Kearns to plan an educational session “and then decide where we go from there.” No date was set.

But he clarified that “the Board of Health doesn’t know what the roles and responsibilities are or if they have legal jurisdiction on this. A lot of legal things have to be sorted out, and I hope this presentation will shed some light on the powers that the board has.”

According to Lee Selectman Robert Jones, a key opponent of the Upland Disposal Facility to be built near Woods Pond in north Lee, the nonprofit Housatonic River Initiative founded and led by Tim Gray had had “success” in previous appeals “by using local boards of health.”

Jones supports a withdrawal by Lee from the five-town settlement agreement. During the May 16 annual town election, residents voted 652-388 to ask the current Select Board to rescind the settlement approved by previous members more than two years ago.

Attorneys representing Gray’s group recently filed an appeal of the settlement with the U.S. First Circuit Court of Appeals in Boston. In February, a two-judge Environmental Appeals Board panel in Washington, D.C., rejected appeals to overturn the agreement and to require all PCB material to be shipped out-of-state to licensed federal facilities.

Jones, reading from an HRI memo, told Tri-Town board members that Gray plans to ask the Lee Board of Health to review legal options to determine whether the low-level sediment to be contained in the disposal facility “presents a health impact to the residents of Lee.”

The goal, Jones said, would be to “ban the installation of the proposed dump in Lee if the Board of Health concludes it would impact the health of residents.”

Jones proposed bringing in experts working with HRI at a Tri-Town Health Boards educational session, including a geology professor he described as formerly employed by GE and the EPA who opposes the Woods Pond location as “an example of the worst possible conditions for a dump site.”

He asked Tri-Town to consider hearing from Gray and several of his experts “to show you how you could possibly become involved in taking a look at this as a potential health crisis, not only for Lee but for all of southern Berkshire County.”

The session's moderator, and speakers, aren't yet identified.

Responding to a question from Dr. Robert Wespiser, who chairs the Lee Board of Health, Jones said Gray’s group would spell out how Tri-Town could intervene in the cleanup agreement, if it chooses to do so.

“We’ve got a lot of irons in the fire, but this is a big one,” Jones said. “But you may find this is the opportunity for you to actually weigh in on the proposed PCB dump in an effective way. … This is a possible partial remedy for dealing with this, but we’re just asking you to hear us out.”

The educational presentation could lead to a more formal hearing “if you want to get involved in it,” Jones told the Tri-Town members.

Wespiser pointed out that “federal authority usurps our ability to address action and to actually have legal standing in these areas.” He suggested studying legal cases that may clarify any options open to Tri-Town Health.

Dianne Romeo, who chairs the Lenox Board of Health, said she “sees no harm in at least allowing them to do a presentation to educate us.”

“More education is better for all of us,” said Dr. Henry Schwerner of the Stockbridge Board of Health.

The session will be designed to present more than HRI's point of view.

Gray, who joined Tuesday's televised Tri-Town meeting in progress, emphasized that he’s seeking a formal Board of Health hearing “since they’re the only people in town that has power under Massachusetts law.”

He is lining up paid “expert witnesses” and stated that he is including an attorney, Cristobal Bonifaz of Franklin County, who could represent the Board of Health and the town “if anything comes of this hearing that doesn’t work out exactly right.”

Dr. Charles Kenny, chairman of the Tri-Town Boards of Health, stressed that a balanced educational presentation is planned as a first step, not as a formal hearing.

“It’s a privilege for us to be part of an educational process related to this issue of community importance,” Kenny told Gray, who had been delayed in joining the remote meeting. “But I won’t let you waste our board members’ time by going over this, which we already clearly understood.”

“There will be a hearing, we hope that you will decide to do that, Massachusetts General Law gives you that right,” Gray countered. “If you deny it, then the dump will happen, that’s the problem.”