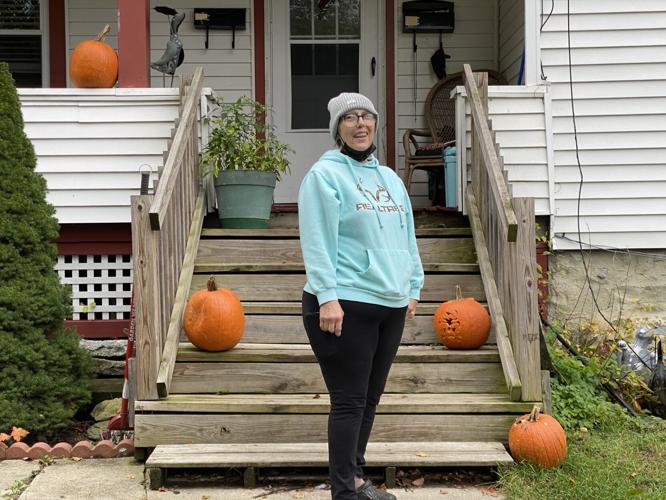 Barbara Skalski said that without the At Home in Pittsfield project, she is not certain that she could afford to fix her roof. Before turning to the city, Skalski was struggling to find a contractor who would take on the work of fixing the old slate design. 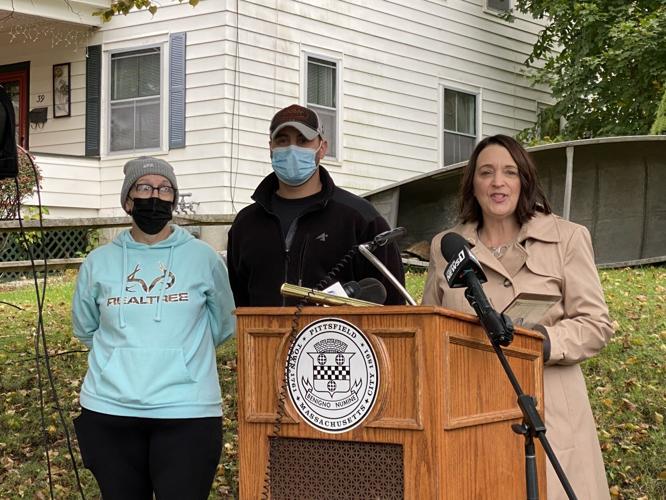 Skalski, left, John Carchedi, Pittsfield's rehabilitation specialist, and Mayor Linda Tyer discuss the city's At Home in Pittsfield program during a news conference Wednesday. Tyer said she is proud of the program that helps residents finance exterior fixes to their homes. 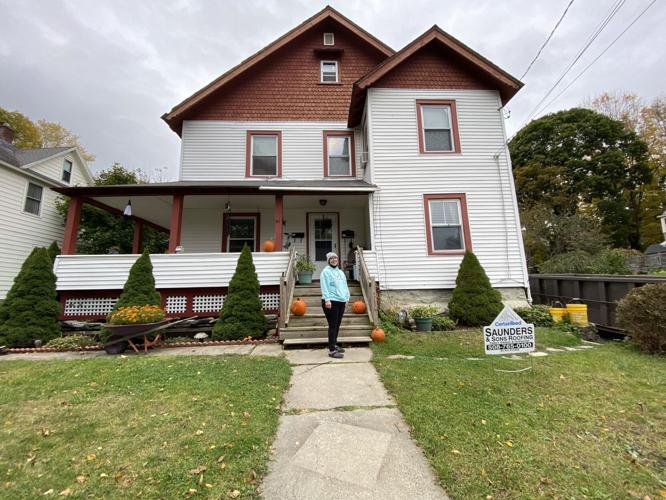 Barbara Skalski said that without the At Home in Pittsfield project, she is not certain that she could afford to fix her roof. Before turning to the city, Skalski was struggling to find a contractor who would take on the work of fixing the old slate design.

Skalski, left, John Carchedi, Pittsfield's rehabilitation specialist, and Mayor Linda Tyer discuss the city's At Home in Pittsfield program during a news conference Wednesday. Tyer said she is proud of the program that helps residents finance exterior fixes to their homes.

PITTSFIELD — The At Home in Pittsfield program is set to cover the cost of exterior renovations to 19 homes — three of which already are complete.

PITTSFIELD — Nearly two years after she proposed it, Pittsfield Mayor Linda Tyer won support Tuesday for a plan to help residents fix up the o…

PITTSFIELD — Seniors with pensions that aren't keeping up, young professionals saddled with student debt and single mothers dreaming of their own home. These are the people Mayor Linda Tyer had …

City officials say that in the seven months since the grant program launched, they have seen enough interest from residents to put another $500,000 behind the program — this time from the city’s allocation of federal coronavirus relief money.

“We had 83 applicants, and we only had $500,000,” Mayor Linda Tyer said during a news conference Wednesday to announce the second round of funding.

“That speaks to the popularity of this program and the need, and we want to be as responsive as possible, which is why we feel very strongly that the American Rescue Plan can be another resource of funds for this important program.”

Housing Specialist and Fair Housing Officer Henide Harvender said that of those 83 applicants Tyer mentioned, 19 met the city’s requirements that properties be owner-occupied, no more than two units, and that the household’s annual income not exceed 120 percent of the area’s median income. That means a single-person household could make up to $72,600 in 2021 and qualify for the program.

While a little fewer than half the approved applicants still are getting estimates for their projects, the city estimates that once those estimates come in, the program will have used about $421,000 of the original $500,000. The city caps disbursements at $25,000 per applicant to cover exterior projects — such issues as reroofing, gutter and downspout improvements, window and door replacements, and porch and chimney repairs.

How we got here

The At Home in Pittsfield has been a passion project of Mayor Linda Tyer's, first proposed in 2019, and then again in 2020.

Tyer's original proposal called for using $250,000 from the General Electric Economic Development Fund to create a zero-interest loan for low-income homeowners to use to fix up the exterior of their properties.

That proposal failed when members of the City Council pushed back on using money from the GE fund to cover residential projects instead of commercial ones.

By 2020, the makeup of the council had changed, as had some of the opinions of the council critics to the project. In November, the council voted to approve the program with $500,000 from the GE fund. Tyer said at the time that she wouldn't ask the council to make a repeat disbursement.

For Barbara Skalski, the program was a perfect fit.

Skalski, by her own account, is a good saver. Since 2006, she has saved her paychecks from her job delivering The Berkshire Eagle, Instacart orders, and other odds and ends to transform her 1880s home to something of this century — expanding the kitchen, redoing the floors and transforming the layout all on her own.

Skalski has chipped away at the projects, building a cozy home for her children, grandchildren, three cats, a bird, a St. Bernard named Yukon, a Chihuahua named Bingo and a three-legged dog named Jack. But, no matter how much she has saved, work on the home’s exterior has been just out of reach — until now.

Skalski’s home is one of nine properties approved to use At Home money to cover the cost of a roof replacement — one of the most common requests, along with gutter replacements. She said that if it wasn’t for the rain this week, the team from Saunders and Sons Roofing already would be scaling her roof.

“I was trying to save money to get my roof repaired because it’s slate and nobody wants to do that anymore, so, the cost to replace the roof was way more expensive than I had anticipated,” Skalski said. “It’s been a great help for me, because without this program, I would never be able to keep up with the maintenance and keep my home in the condition that it is.”

At Home in Pittsfield covered $25,000 for the cost of Skalski’s roof repairs and some work on her back porch. The remaining $5,481 Skalski pitched in herself.

If all goes to plan, Skalski’s home projects will be done by the end of the year. If she stays in her home for at least seven years, the city will forgive the loan. For the final bit of porch work left on her list, she says she will be turning to another source to finance the project.

“I’m gonna win the lottery and get it done,” Skalski said.

PITTSFIELD — The City Council and Mayor Linda Tyer agree on one point: Helping residents repair their homes is a worthy cause.But how to fund the would-be program has become a thorny issue. …