PITTSFIELD — Verizon Wireless has filed a federal lawsuit in an effort to block an emergency order from the Pittsfield Board of Health requiring the company to come before the board to defend its cell tower at 877 South St.

In a suit filed Tuesday in U.S. District Court of Massachusetts, the company asks the court to answer a “federal question” on the power of local boards and municipalities to regulate telecommunication companies over environmental and health concerns.

Verizon is asking the court to weigh in on whether the Board of Health’s order has violated the Telecommunications Act of 1996 — a law that established how telecommunication companies could be regulated and compete with one another in a post-internet era.

Since January 2021, the Board of Health has been working on a request from the City Council to “investigate the health concerns that have been reported by residents that live near the cell tower.” 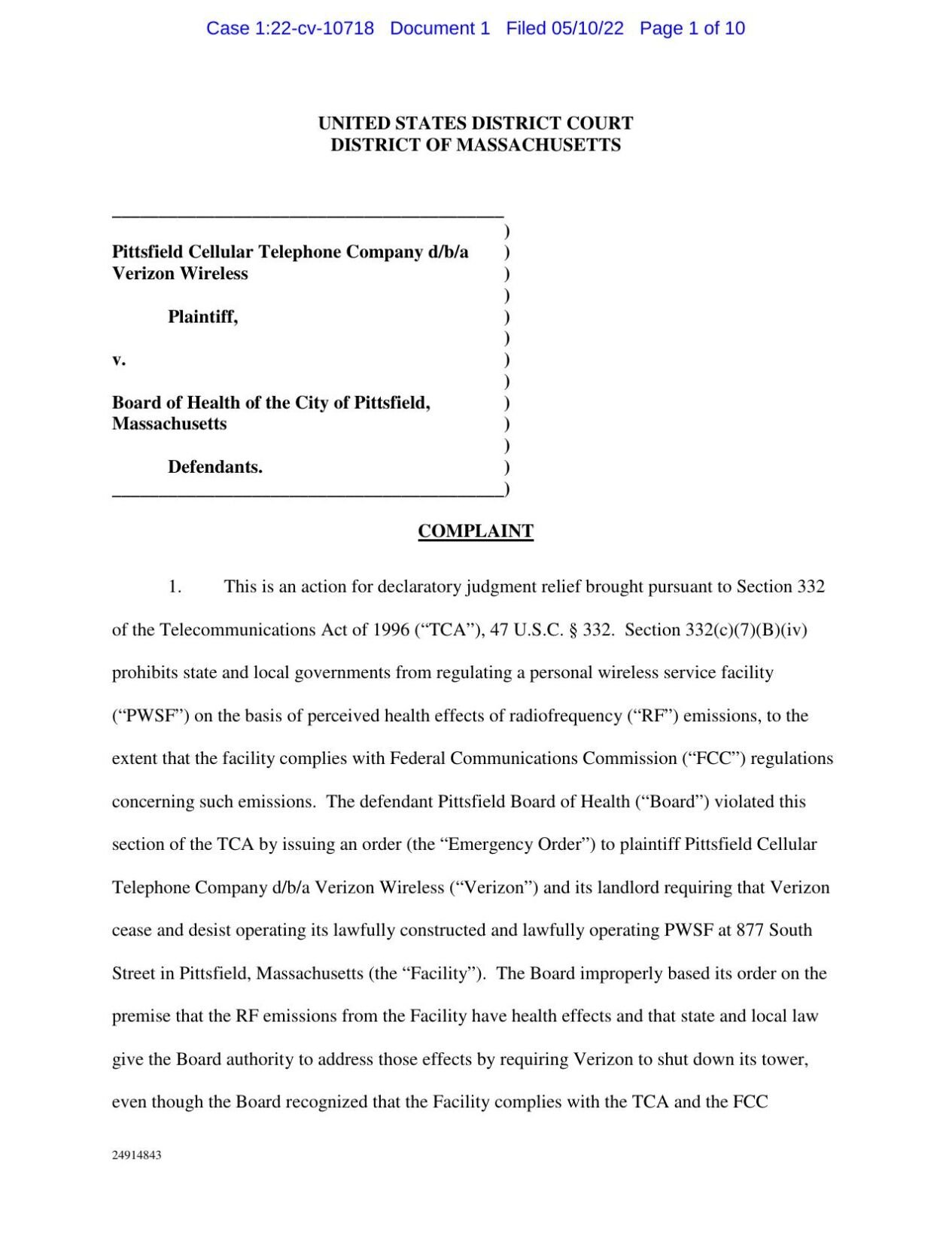 Residents living near the 4G cell tower have shown up to countless city meetings reporting that since the tower was turned on in August 2020, they have experienced headaches, dizziness, nausea, insomnia, skin rashes, palpitations, and tinnitus among other health problems.

The Board of Health issued an emergency order on April 11 giving Verizon seven days to request a hearing to show “why the Board of Health should not issue” a cease-and-desist order to the company under the board’s “statutory and historical police power to protect its citizens from injury and harm.”

In the order, the board finds that the cell tower “is a public nuisance” and “a cause of sickness” that “directly causes harm to certain individuals, and renders dwellings unfit for human habitation.”

The board had planned to come before the City Council on Tuesday night to ask for funds to hire attorneys to back up the board’s order. News of Verizon’s lawsuit halted council action on that request.

In its lawsuit, Verizon argues that the board’s order violates the Telecommunications Act’s preemption clause.

That clause says that “no state or local government or instrumentality thereof may regulate that placement, construction, and modification of personal wireless service facilities on the basis of the purported environmental effects of radio frequency emissions” as long as the facility is operating within the Federal Communications Commission’s regulations on those emissions.

Health effects, Verizon argues, are included within the scope of “environmental effects.”

The company maintains that it is operating well within the FCC’s standards for radio frequency (RF) emissions.

Verizon attorneys also attached the April 19 response the company sent to the board after it received the emergency order.

“There has been no credible evidence provided to the board to support the view that RF emission in the range permitted by the FCC have negative health effects in humans generally or that they have the issues alleged by certain residents of the city,” the response states.

The company claims that the science on the safety of radio frequency emissions is settled and there’s no health risk from “wireless devices and networks.”

The board heartily disagrees in its emergency order, saying it has “over 11,000 pages of evidence of studies, reports, and scientific and medical experts’ opinion about the dangers to human health and the environment cause by exposure to wireless radiation.”