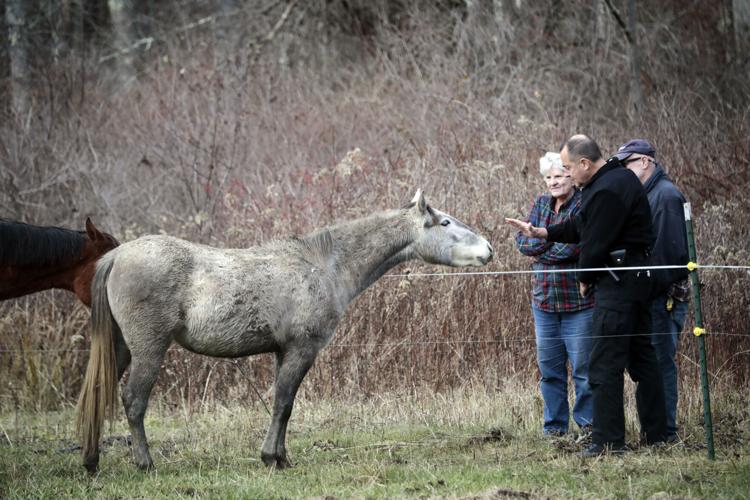 Sgt. William Loiselle of the Massachusetts Society for the Prevention of Cruelty to Animals reaches out to greet a horse Friday at a farm that is under investigation for charges of animal cruelty. 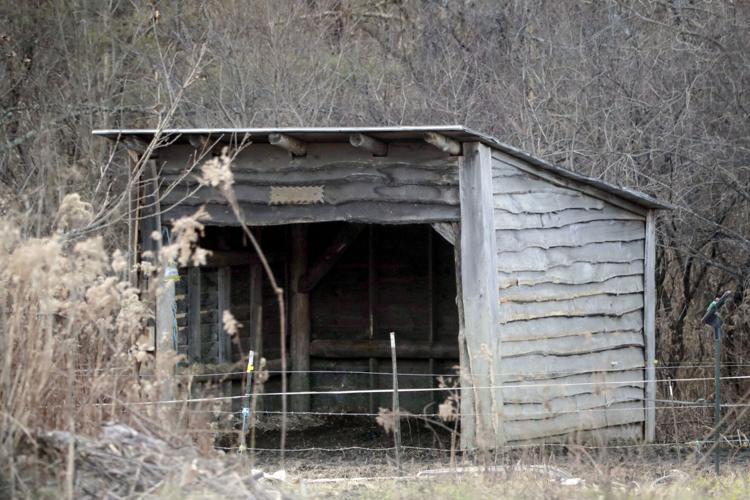 A small wooden structure is the only shelter available for around 24 horses at a farm in Alford that is being investigated on charges of animal cruelty. 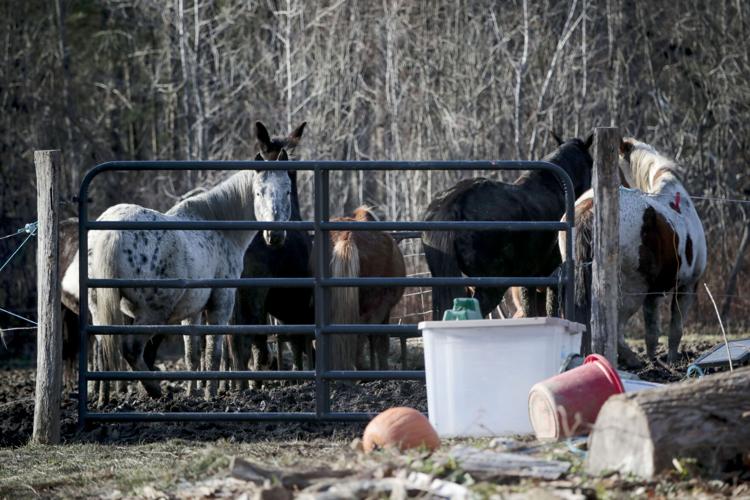 The Massachusetts Society for the Prevention of Cruelty to Animals and the state’s Department of Agriculture are investigating a farm in Alford on animal cruelty charges, for the living conditions provided to a large number of horses, some of whom are sick and lame. 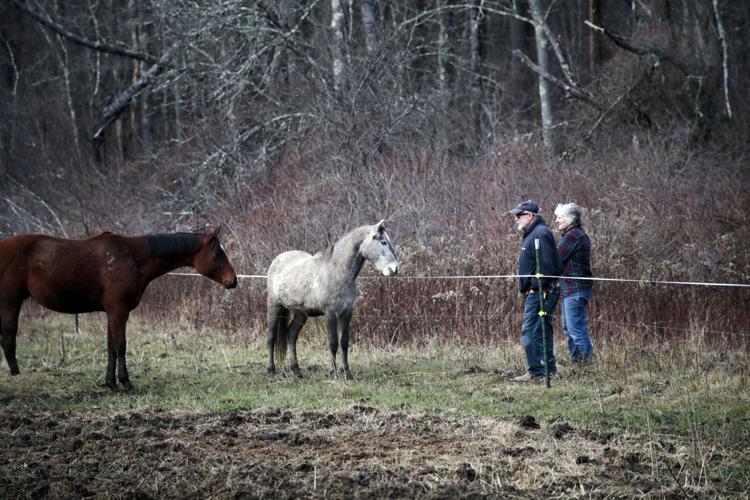 Representatives from the Massachusetts Society for the Prevention of Cruelty to Animals (MSPCA) and the state’s Department of Agriculture arrive at a farm in Alford that is under investigation for charges of animal cruelty, regarding the living conditions provided to a large number of horses, some of whom are sick and lame. 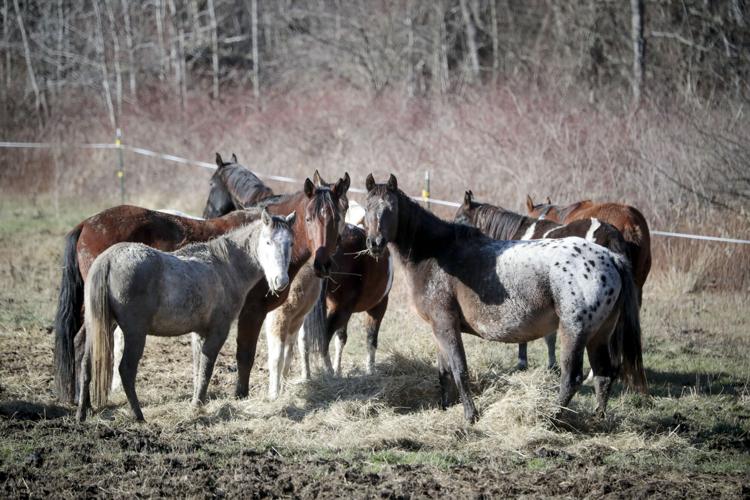 A farm in Alford has come under investigation for the living conditions provided for a large number of horses, some of whom are sick and lame. 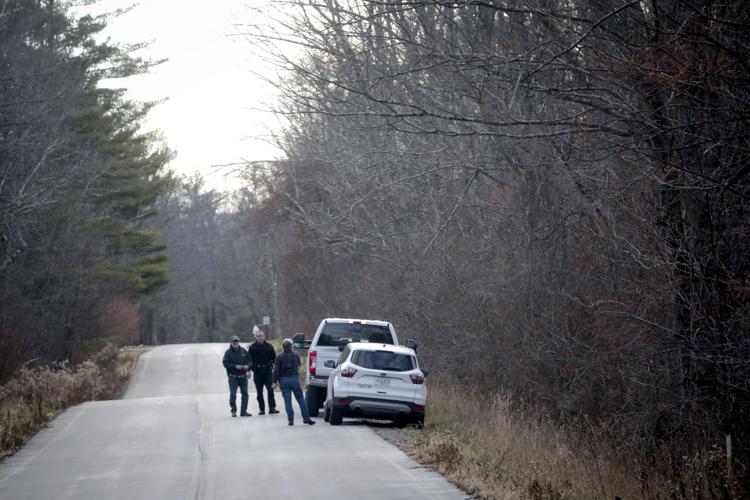 Representatives from the Massachusetts Society for the Prevention of Cruelty to Animals (MSPCA) and the state’s Department of Agriculture arrive at a farm in Alford that is under investigation for charges of animal cruelty, regarding the living conditions provided to a large number of horses, some of whom are sick and lame.

This story was updated to correct the location of the farm.

ALFORD — The owners of more than 20 horses living at an East Road property are being investigated for neglect and leaving the animals in dangerous conditions.

Agents from the Massachusetts Society for the Prevention of Cruelty of Animals and the state Department of Agriculture arrived at the property near the West Stockbridge border Friday as part of an ongoing investigation into conditions here.

Several of the horses are sick with what appears to be a virus, and this has led agricultural officials to quarantine all of them.

A mule had to be put down Thursday, according to someone familiar with the situation who spoke on the condition of anonymity. Some horses are limping.

Meanwhile, there are concerns about the health of all the animals as another round of rain arrives Saturday.

When asked if the weather is a consideration in how the Massachusetts Society for the Prevention of Cruelty of Animals will move forward to protect the horses, one of the organization's police officers said it would be a factor.

“We’re considering everything,” said Sgt. William Loiselle, speaking at the property. He added that the horse owners are being “cooperative” with regard to the investigation.

Loiselle said he couldn’t disclose why the horses were brought here and whether they were compromised before they arrived.

A spokesperson for the society, a nonprofit, said this is an ongoing animal cruelty investigation.

“We will have more to say about the case and the animals involved in the days ahead,” said Robert Halpin.

Howard Wilson — the owner of the property and whose daughter Sierra Wilson brought the horses there — declined to answer questions about the condition of the horses or the investigation.

“We have a plan for [the horses] and there’s nothing more to discuss,” he said.

Massachusetts law does not give the the society the authority to take animals — they have to be surrendered first.

Their law enforcement officers have police powers to investigate and enforce animal cruelty laws. They are armed and have the authority to file animal cruelty charges in court as well as testify.

The society has several shelters in the state for abandoned or neglected animals until they can be adopted. A 100-acre farm in Methuen holds various livestock, including horses.

It is unclear whether these horses could be taken there, given the quarantine.

‘Not going to last’

What appeared Friday to be nine horses were on one section of the property cordoned off by an electric fence. They also appeared to have just been given fresh hay. Around seven were seen in the field closer to the house, where there is lean-to-type shelter that could hold several at the most.

The horses also have been going without grain and hay for periods of time, said someone who called The Eagle to report the conditions, and spoke on the condition of anonymity.

“Some days they have hay and other days they have nothing,” they said, adding that a resident had tipped off the society to these conditions about two weeks ago, setting off the investigation.

That person said the horses do not have blankets or waterproof covers, and that a skin infection called “rain rot” can occur when their hair gets too wet. And they worry the next rain storm will further weaken them.

“These horses are not going to last,” they said, barring some intervention.

They also said that in the wild, animals can find shelter in the woods. In this case, the horses are penned in.

One horse expert says that unless horses are used to living in the wild or are not domesticated they don't have the tools to fend for themselves.

"It is actually inexcusable to leave horses in a field where there is no shelter or regular nourishment and water," said Hayley Sumner, owner of Berkshire HorseWorks in Richmond.

Sumner said that while grooming is inadvisable in the winter because it can pull out their winter coats, a big concern is infections of their feet and maintenance of their hooves.

"You want to make sure there aren't muddy conditions that lead to white line or thrush," she said.

"Before one gets involved with horses they need to understand the responsibility and commitment no matter what weather conditions bring so that they are equipped with a backup plan to accommodate and ensure [the horses] health and safety."

The Massachusetts Society for the Prevention of Cruelty to Animals had to quickly reposition scores of farm animals for the arrival of 18 horses — a number of which have a yet-undiagnosed but contagious respiratory infection. Sources familiar with the investigation say six horses still remain on the Alford farm.